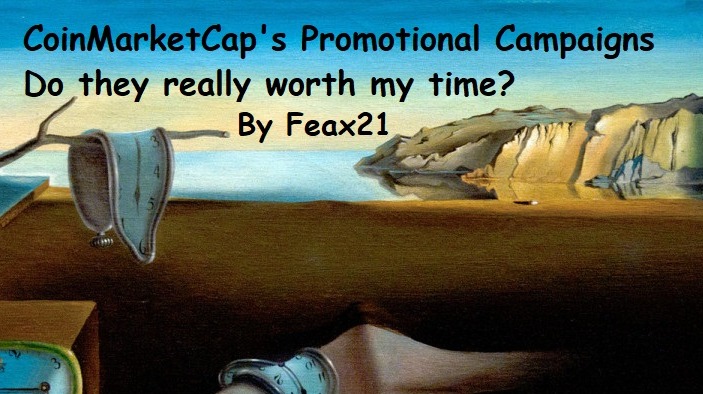 CoinMarketCap's Promotional Campaigns. Do they really worth my time? 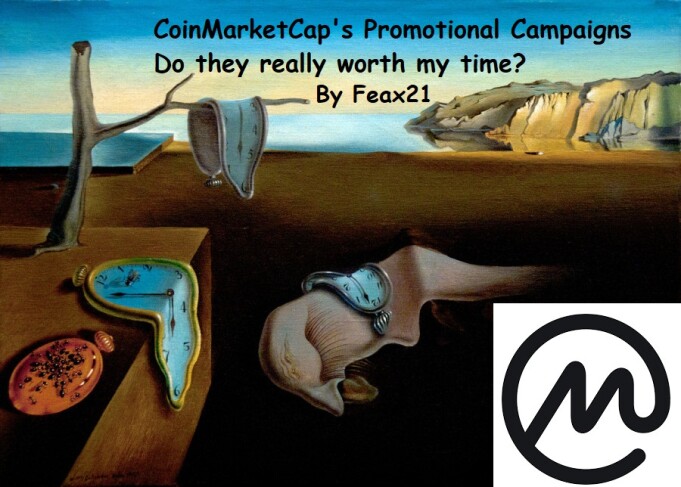 One of these promotional activities are included on the CoinMarketCap's webpage such as the CoinMarketCap's Learn and Earn campaigns and the CoinMarketcap's Airdrops. However, lately it proved that CoinmarketCap has proceeded in a kind of aggressive strategy of launching several promotional campaigns in order to attract more visitors who would be interested to use platform's other services and sections such as the newly integrated "Swap With MDEX" Token Swap service or the "Kusama PLO Parachain Slot Auctions" listing auctions and associated crowdloans on all Kusama parachain lease offerings on the Polkadot network.

And I have to admit that quite few weeks ago, I used to devote quite a considerable portion of my recreation time, in order not only to participate in these airdrops and Learn and Earn campaigns, but also writing articles on my secondary blog with title "Learn and Earn Investigations" providing all the necessary answers to the quizzes' questions. And it was quite an enjoyable task although the eventual recreation time consumption. I won't speak about whether these articles were successful or not attracting big amounts of tips from the Publish0x readers in proportion of the visits that I had.

And although my participations in the Learn and Earn campaigns were initially very successful and ended on the deposit of various tokens and crypto coins into my Binance Spot Account which I used them to stake them accordingly, after a while, I have started to wonder whether the whole idea of investing my time on CoinMarketCap's Airdrops and Learn & Earn campaigns was worthy or not taking into consideration the limited fruits of my time investment.

CoinMarketCap Airdrops initiated only recently from around June 2021 and the participants were guided to fulfil specific social media tasks such as the follow up of the airdropped token twitter or telegram account. The fact that the airdrops were taking place on CoinMarketCap and not in any unknown platform, provided huge amounts of credibility to the participating tokens and airdrops as many unknown airdrop platforms and tweets are proved to be organised by scammers trying to steal participants personal information form their social media accounts, of what is known as social engineering and financial information of their crypto addresses which it can be combined in order to uncover their identity. 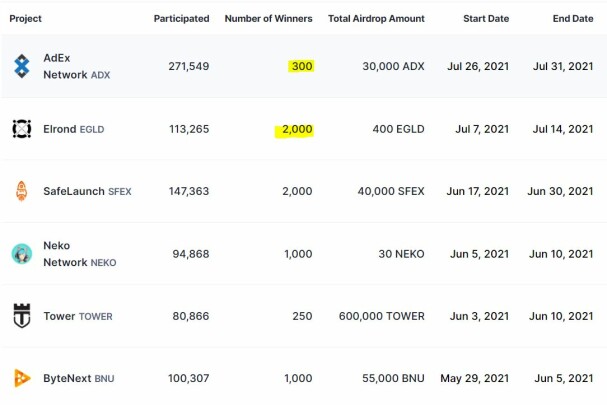 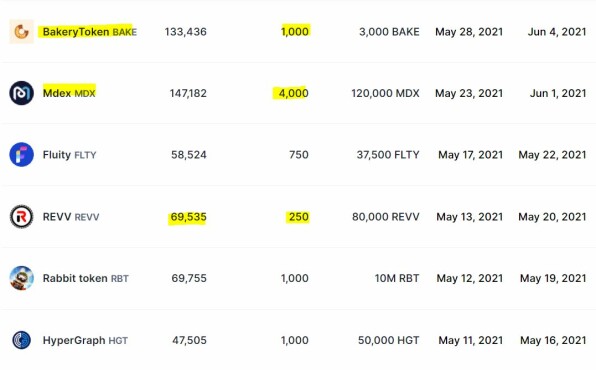 Specifically, i have managed to create an estimation with the winning percentage of the participants and a a corresponding chart and it is obvious that the most popular airdrop was the AdEX Network airdrop with the astonishing number of 271,549 participants and the less popular was the BlockSwap Network with only 32,015 participants. However, the AdEx Network airdrop designated only 300 winners and the REVV, TOWER tokens only 250 winners in comparison with the 4,000 winners of the MDEX airdrop. As a consequence the lower wining percentage was the one of AdEX network with only 0.110% possibility of being a winner and the highest was the one of BlockSwap Network with 3.124% possibility of being a winner which still is a tiny winning possibility. 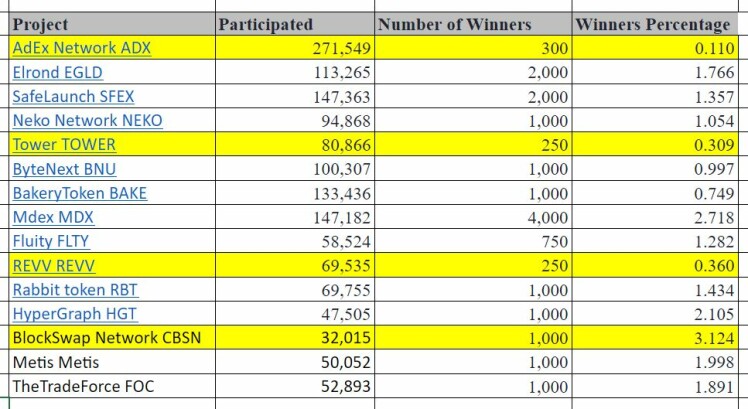 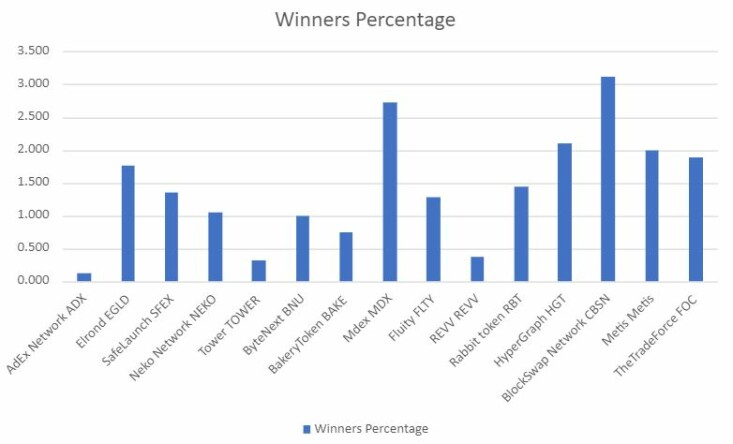 Therefore, I have come to the conclusion, that participating in CoinMarketCap airdrops is simply a waste of time as the possibility of wining the airdropped token is around 3%. Apart from everything else, from 15 airdrop campaigns that I have participated, i was lucky to only earning 100 Rabbit Token which is quite pointless, as the Rabbit Token isn't indexed in any known crypto trading or swap platform.

For many weeks, the Learn and Earn campaigns used to be one of my favourite crypto-activity not only by participating in the quizzes but also writing articles with the answers that I believed that they were correct after performing my own investigation. and here, I would like to remind that in order a participant to be successful, first prerequisite was that the quiz would have been responded 100% correctly, meaning that there is nο tolerance of being wrong in not even a single question. Therefore, in the past I managed to have the following tokens deposited into my Binance Spot Account:

However, in the previous week, CoinMarketCap initiated a rather aggressive policy by providing several back to back Learn and Earn campaigns for several tokens that I have found quite interesting and attractive and therefore not only I participated on them, I kept writing investigation articles with the responses consuming vast amounts of time on them with the hope that I will be deposited again the earned token into my Binance Spot Account or into my on-chain wallets such as Metamask. Specifically, over the previous weeks I participated in 10 consecutive Learn and Earn campaigns of tokens such as the FIO Protocol, the REVV Token, the Mobox token, TheFORCE Trade, the Graph 2nd Campaign, the 1INCH second Campaign, the PolkaStarter, the Plasmafinance PPAY token, the SushiSwap Token, the IOTEX or the TokoCrypto token. Unfortunately, it appeared that the same phenomenon that took place with the popularity of the CoinmarketCap airdrops, prevented me in having distributed these tokens earned through the Learn and Earn Campaigns. and someone can easily claim that the main reason of my failure is possibly the fact that I didn't provided the correct answers to the quiz which appears quite convenient. However, instead of receiving a notification that I have failed in the quiz in the corresponding CoinMarketCap's Token Distribution Status webpage, the notification that I kept was receiving was the following:

Due to overwhelming demand, kindly note that only a limited number of users would be eligible for distributions. Users get a certain pre-determined amount of tokens on a first-come-first-serve basis until the faucet of tokens is emptied; by the time of your participation, the reward pool was empty. 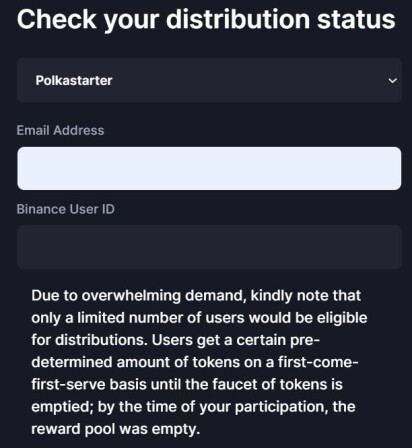 And apparently, as I mentioned before, the main reason of my failure was the "overwhelming participation" in the campaign, however what is really discouraging is the fact that CoinMarketCap is using the convenient term "faucet" which has been emptied almost immediately after the start of the campaign period to justify the first-come first-serve policy of the campaign apart from the latest campaigns that CoinmarketCap is claiming that the distribution of the tokens will take place randomly among the successful participants just like it happens with the Airdrops. And again what is the possibility of being randomly selected if there are over 100,000 successful participations? Characteristically, in the latest Cybertino NFT drop, there will be only 100 lucky participants who will receive the drop. This is literally a 0.1% chance of being selected!

And I should point out that one of the reasons of the increasing popularity of the Learn and Earn Campaigns is the fact the quiz questions are quite straightforward anymore without presenting any special degree of difficulty where the participant had to do a personal research on the web in order to find the correct answers. Here I should provide the comment of my good friend PVM on one of my noise.cash post about the REVV Learn and Earn Campaign. 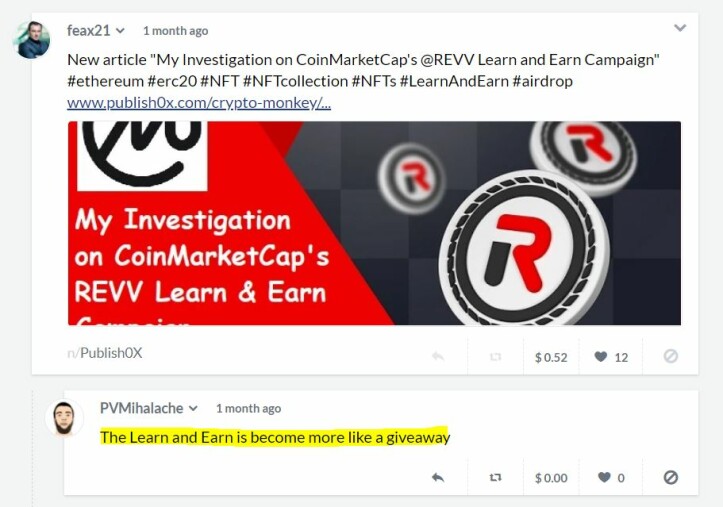 Well, my dear friend PVM, I can easily say anymore that the Learn and Earn campaigns aren't a giveaway for sure, because if they were a giveaways, I would have had a better chance of having the giveaway token distributed into my on-chain wallet.

Therefore, after a long period of back to back Learn and Earn quizzes and investigation articles, it is time to take a break and allocate my recreational time other more creative (crypto) projects. At least from the article side of them.

My only advice is that after responding all the questions of each quiz, the participant needs to do one final step and complete the final captcha as in the picture below in order to submit the form successfully. This is another trick from CoinMarketCap that is trying to reduce the total number of participants even if they would complete all the quiz questions correctly.

I finish this article however, with the original painting of my cover image, the Salvador Dali's "Persistence of Memory". According to the article, the iconic melting pocket watch in Dali’s masterpiece is meant to signify the artist’s personal interpretation of time as “soft” or “hard.” The mysterious figure that appears to be sleeping underneath one of the “soft” clocks is thought to symbolize the skewed passage of time that occurs in one’s dreams. 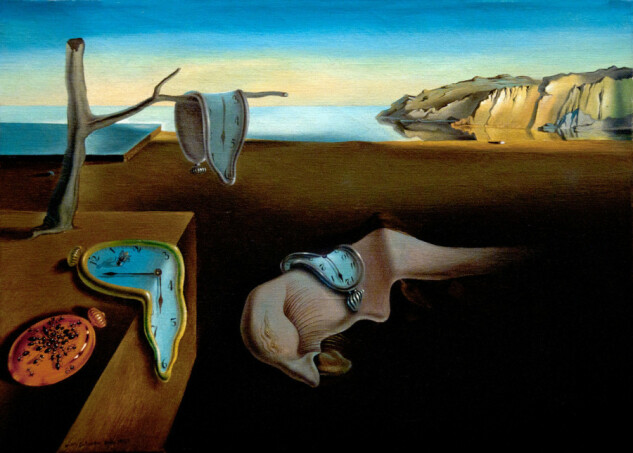 Disclaimer: All information found on this article is for informational purposes only. I do not provide any personal investment advice so please make your own research before proceeding to any investment/trading actions