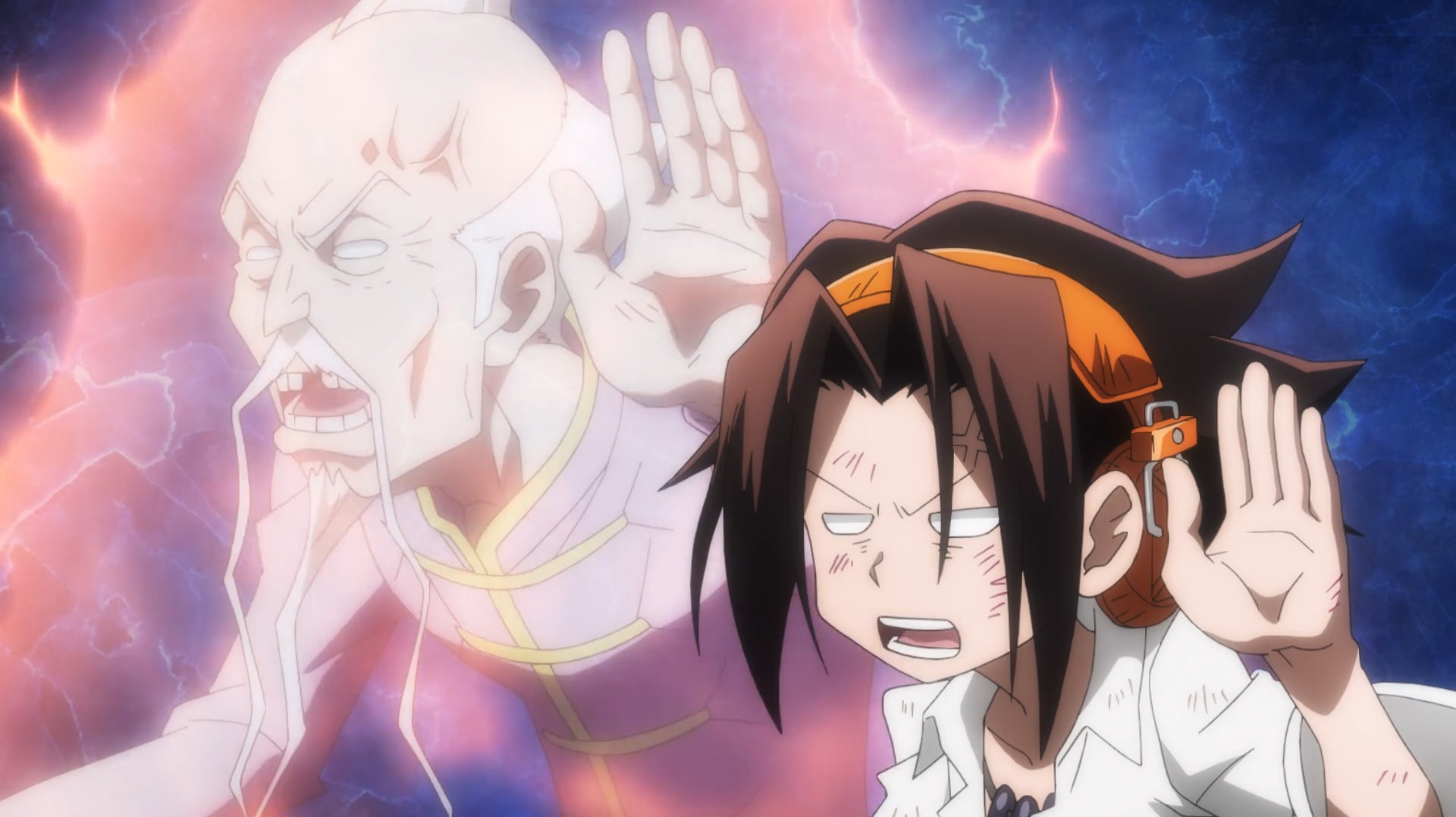 Last week, I gave my thoughts on Yoh vs. Ren in Episode 2. While it did skip a few chapters, it did not skimp out on the main storybeats and remained faithful to the content that the anime did adapt. The fighting animation wasn't the flashiest, but it did its job, and the voice acting and music carried the episode for me.

The beginning has Anna revealing her powers as an Itako (more on that later), her engagement to Yoh, and her intentions of making her fiancee the shaman king. Anna intends to put Yoh through strenuous physical training. Yoh is resistant, but Anna gives him a reality check on how he got lucky to have defeated Ren with a flukey 100% integration. 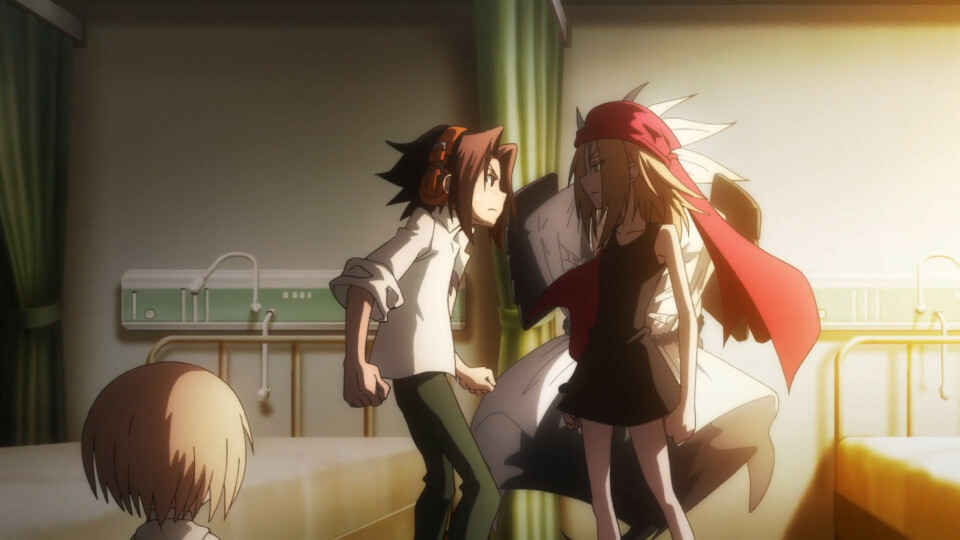 The episode cuts to the next day at school. Yoh arrives at class with a bunch of bandages on his face as a result of Anna's training. He complains to Manta about the hellish treatment and is relieved that the school is his only place of respite. However, it turns out Anna has transferred, too, and is placed in his class.

Yoh, Anna, and Manta later watch a film featuring Li Pai-Long, a famous martial artist and movie star. While Yoh and Manta come away hyped at Li's fighting prowess, Anna is suspicious of the free tickets as they were given with no name on the envelope. It is at that moment that Ren's older sister, Tao Jun, appears and a zombified Li Pai-Long as her guardian spirit. 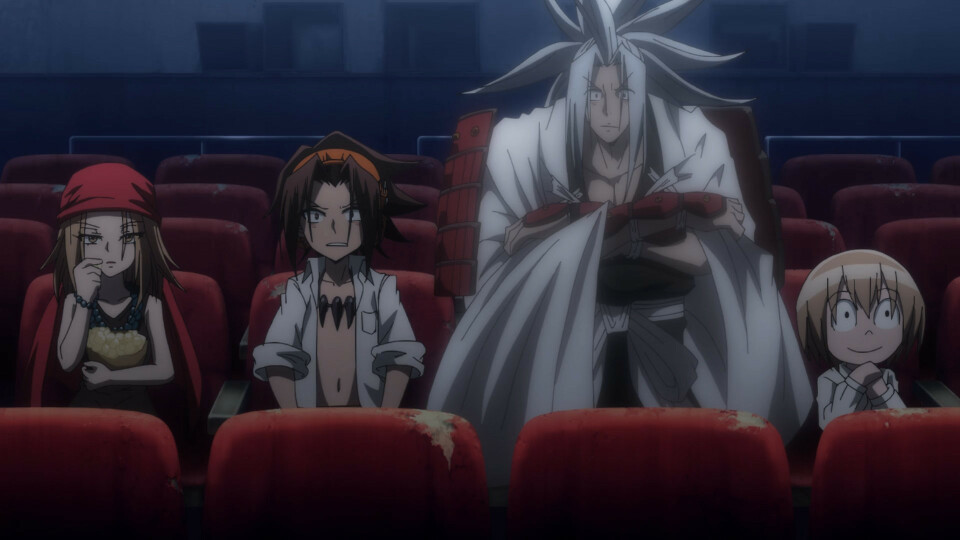 Revealing to be a daoshi, Jun uses her talismans to control Li. Yoh tries to fight him, but the zombified martial artist easily overwhelms him. However, Yoh is able to get back up, commenting how Li's attacks are half-hearted due to Jun's attitude towards spirits as tools, like with Ren. 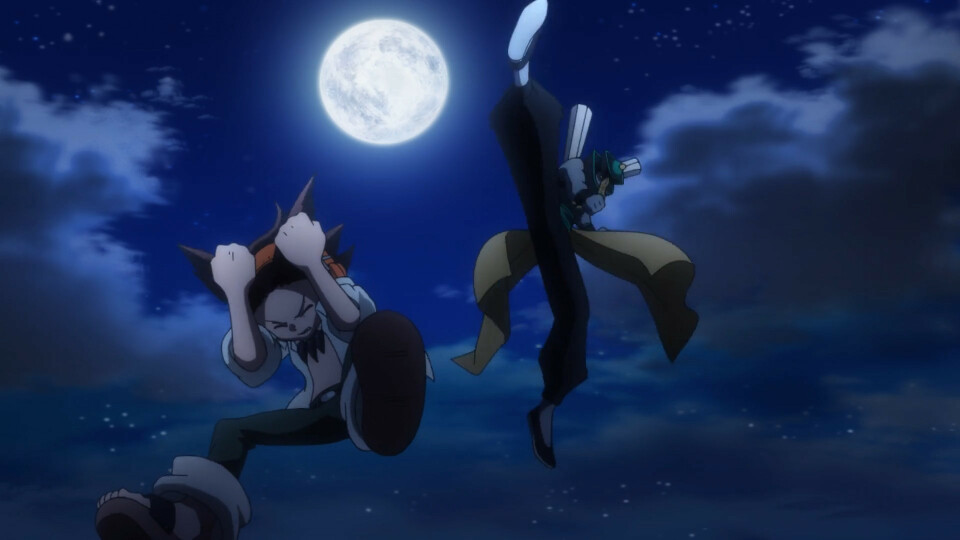 Li Pai-Long about to land a big kick on Yoh.

Unfortunately, Yoh is unable to stem the tide as Amidamaru states that he needs a sword-like weapon. Manta runs off and finds Ryu's wooden sword. While Ryu and his gang beats Manta up, the latter does not give up and stubbornly makes Ryu give his weapon. 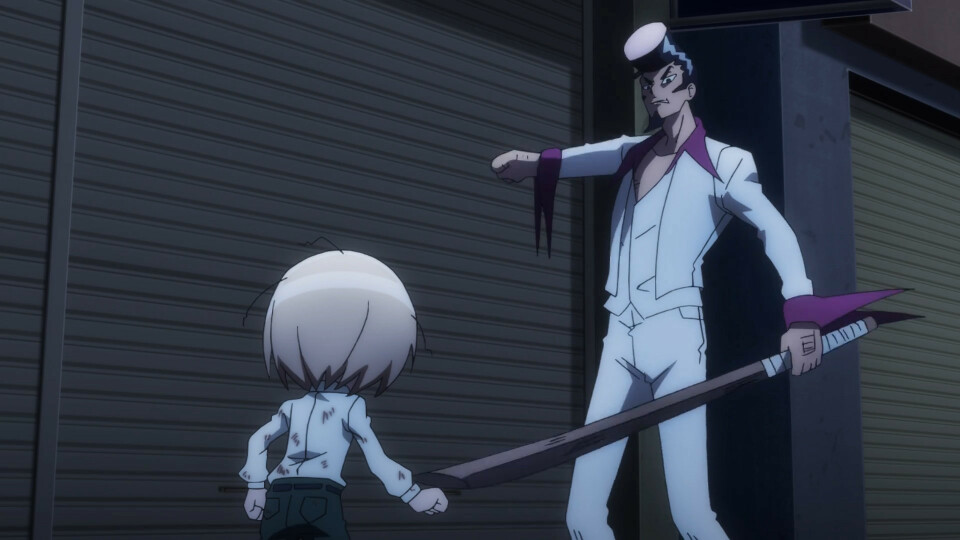 Manta bravely facing Ryu in order to obtain his wooden sword for Yoh.

Manta returns and hands the wooden sword to Yoh. With a weapon fit for a shaman and a samurai ghost, they are able to destroy the talisman that is controlling Li.

Li Pai-Long comes out very dazed and confused. Not remembering what happens to him, he breaks a window out of frustrating with his fists and notices that he is not bleeding. Jun states that he is her puppet and attempts to regain control, but Li remembers everything that happened to him, that the Tao family murdered him in order to turn him into a puppet. He rebels against Jun and is about to land a critical blow before Yoh intervenes. 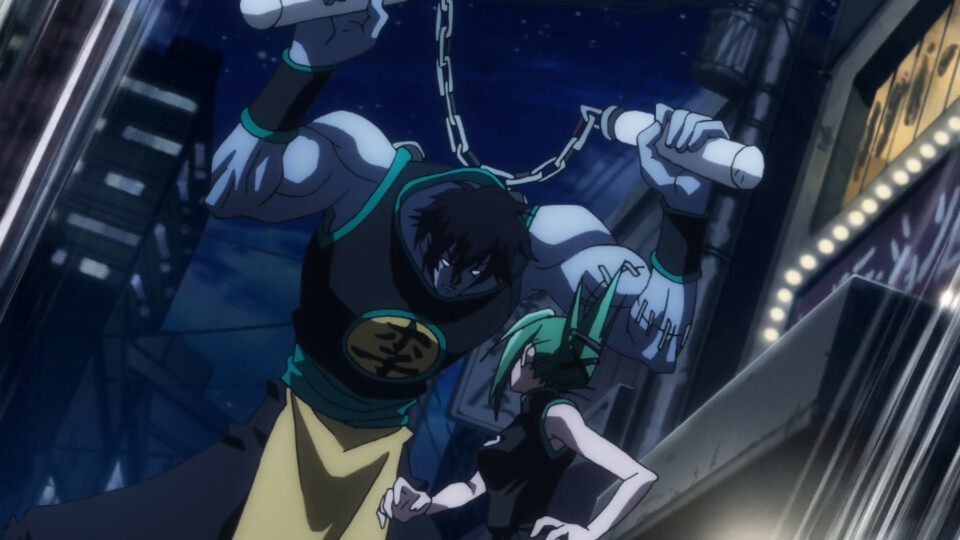 Li Pai-Long about to hurt Jun.

Yoh tries to calm Li down, but blinded by rage, he continues his relentless attacks. Anna asks Jun who can possibly defeat Li Pai-Long to which the latter identifies his master, Shamon. Using her Itako abilities and beads, Anna summons Shamon from the afterlife to integrate his spirit with Yoh. 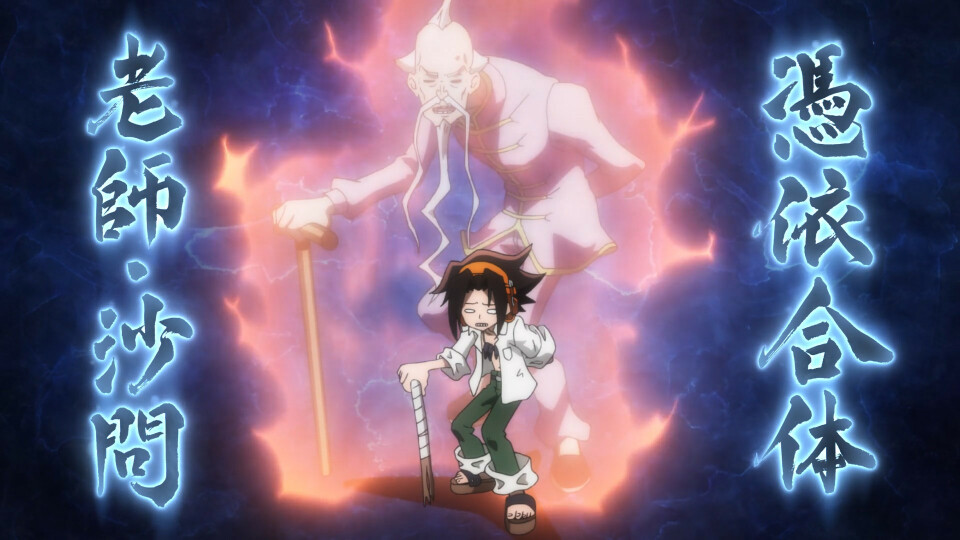 Although Shamon looks like a frail man, he and Yoh easily dodges Li's attacks and eventually defeats him. Li Pai-Long's real spirit exits the zombie corpse and reconciles with his master. Jun is about to leave, thinking that she doesn't deserve to have Li as her guardian spirit. However, Li stops her. Even though he is dead, his dream of perfecting his martial art of Dao Dan Do and the best way of doing it is in the corporal zombie form. 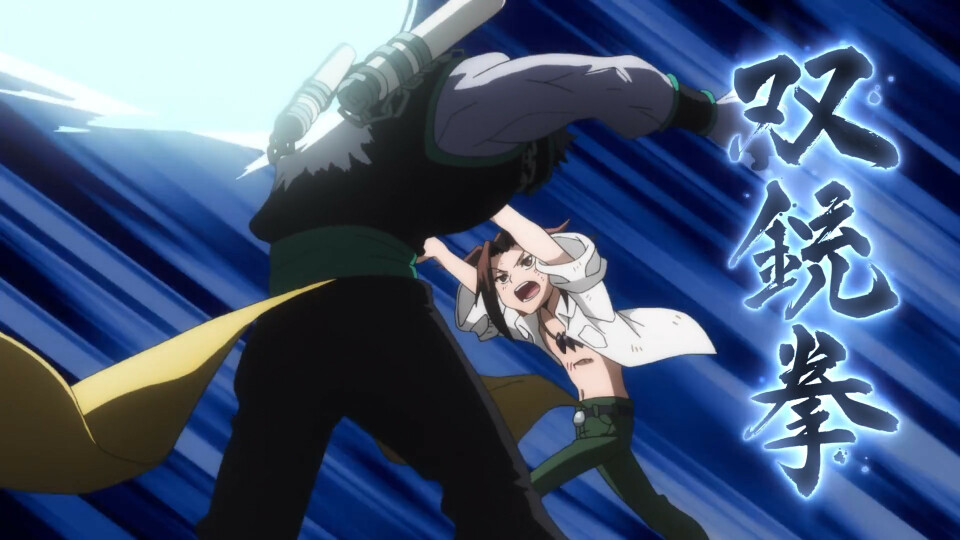 Yoh and Shamon land the finishing blow on Li Pai-Long to snap him out of his rage.

So far, the anime has done a fantastic job staying close to the manga. This episode did cut out some things, but the omitted content was filler, so no complaints there. What I did have issues with, however, was the pacing. It felt a little too fast. Likely, this was because of how this episode adapted 8 chapters whereas the previous episodes each adapted less than that.

While technically the episode remained faithful to the original material, it sort of lacked the manga's spirit (pardon the pun). Due to the time constraints, some of the emotional elements kind of got lost. I felt that the anime didn't spend enough time exploring into Li Pai-Long's sadness and Jun's regret. Because of this, it also hurt the impact of Li wanting to stay by Jun's side. Since everything happened so quickly, the heel face turn at the end felt too sudden. In contrast, the manga and 2001 adaptation paced things more gradually and allowed both characters to develop.

The fight scenes were okay. I was not blown away by the presentation and animation as it felt a bit too static for my tastes. The anime relied on a lot of cuts and semi-still shots which is fine, but it would have been nice if it utilized more advanced techniques. Maybe the studio is cutting costs to allocate the budget to more intense scenes, but I would like to see some more oomph to future battles, especially when the stakes will be much higher as the anime progresses.

To end things on a more positive note, I continue to be impressed with the OST. I liked how the erhu plays during Jun's entrance. It was also very nice to see Manta developing as a character. At the beginning, he was a bit cowardly, but in this episode, he stepped up to the plate and did whatever he could to help Yoh.