Why Do I Own An Irresponsible Amount Of Kleros's Pinakion (PNK)?

Micro-cap coins like Pinakion (PNK) can be a risky investment.  As a potential buyer, it is your job to dig for information and find the most promising, most potentially useful cryptocurrencies before they receive mainstream appeal in the crypto market.  A token with a market cap of around $11 million, that is trading at 2 cents, and being held in only 3,870 addresses, will not look very appealing to the average investor, so, if you are lucky enough to hear about Kleros.io and their token, Pinakion (PNK), then it is up to you to figure out why this cryptocurrency is undervalued and when this cryptocurrency might receive the attention that it deserves. 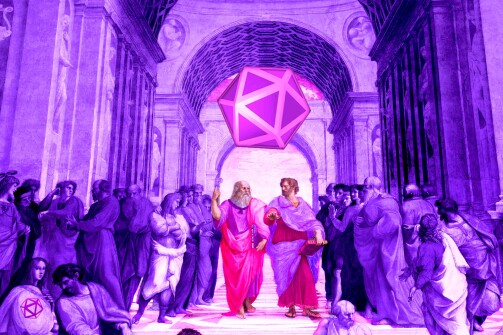 What are Kleros and Pinakion?

First, we need to understand Kleros and the function of their token, Pinakion.

In their own words, taken from the abstract of their whitepaper, which can be found at  https://kleros.io/whitepaper_en.pdf.

"Kleros is a decentralized application built on top of Ethereum that works as a decentralized third party to arbitrate disputes in every kind of contract, from very simple to highly complex ones. It relies on game theoretic incentives to have jurors rule cases correctly. The result is a dispute resolution system that renders ultimate judgments in a fast, inexpensive, reliable and decentralized way."

Kleros has created a decentralized court system.  More specifically, Kleros has created an online dispute resolution system.  Today, transactions are largely digitized, and Kleros offers a way to handle disputes between parties that are transacting via decentralized marketplaces.  Essentially, when you make a transaction, you could specify that any disputes that arise will be handled in Kleros court, and if your goods never arrive, or if services are never rendered, or if the wine you ordered is red instead of white, or if the English article that you hired someone to write is submitted with 100 grammatical errors, or when whatever problem might occur, occurs, then a case would be opened in Kleros's decentralized court, and Kleros jurors would look at submitted evidence to make a vote and render a verdict.

Pinakion (PNK) is the ERC-20 token that Kleros has minted to incentive jurors that choose to adjudicate cases for Kleros Court.  People will purchase PNK, stake it in the Kleros Court DApp, and be chosen to participate in cases.  There are different sub-courts to choose from, like a court for blockchain related disputes and a court for English language disputes, and it is suggested that jurors only stake in courts in which they have some knowledge or expertise.  The more Kleros staked, the more chances a juror has at being selected for a given case.  Jurors receive a reward paid in Ethereum and PNK for casting a vote that is coherent with the winning vote.  The rewarded PNK comes from arbitration fees that are required to submit a case in Kleros Court and from the PNK that voters will lose for voting against the coherent vote. 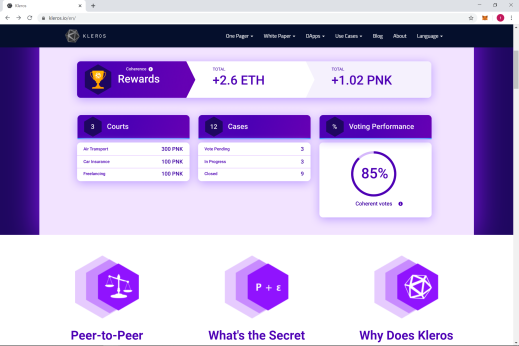 PNK will be used to govern Kleros Court.  Holders will receive votes to cast based on their amount of staked PNK.  These votes will be used to determine policies, add sub-courts, change the smart contracts that Kleros relies on, or modify parameters of a sub-court (arbitration fees, minimum stake required).

Kleros is also helping to solve the oracle problem by creating solutions for DApps like Realitio.  Voters verify real life events and receive rewards for coherent votes allowing smart contracts to access data from real life events.  This sort of solution also could help eliminate fake news. Decentralized media platforms could integrate with Kleros to give users the ability to dispute fake news. 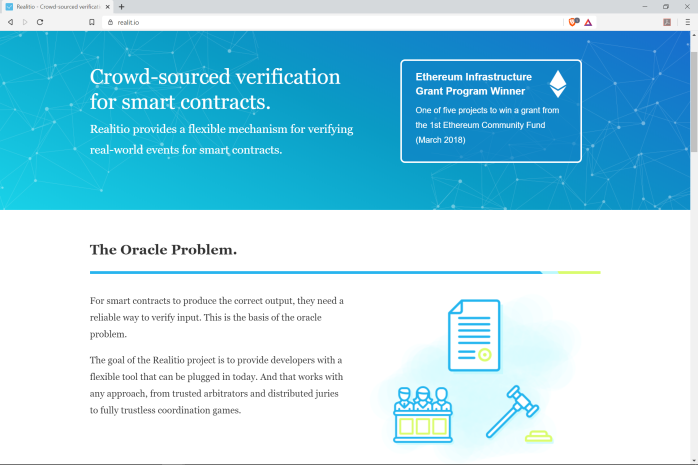 Now that we have a basic understanding of Kleros and Pinakion, we have to figure out if and when this project will actually ever be adopted.  Just because you have a great idea, that doesn't mean that you can execute that idea in real life.  I see a brilliant use case, now let me show you the trail of bread crumbs that lead me to believe Pinakion is about to experience massive gains in the very near future.

Perhaps the best indicator available that shows that Kleros could adjudicate a large portion of the $150 billion disputed in DApps, is their repeated endorsement from the man that birthed the altcoin industry, Vitalik Buterin.

Here is an screencap from Buterins own website where he mentions Kleros as a potential subjective reputation system:  https://vitalik.ca/general/2019/11/22/progress.html 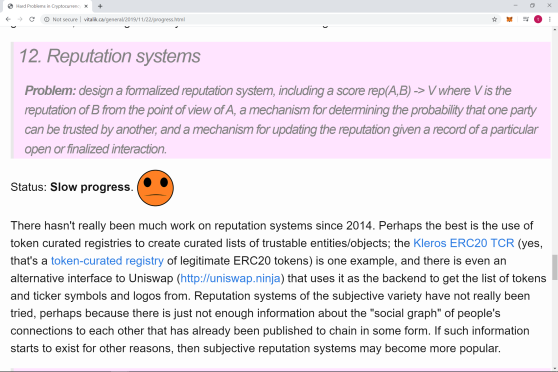 Here is a tweet where Vitalik expresses his positive opinion of Kleros's work in decentralized arbitration, curation, and proof of unique human solutions:  https://twitter.com/VitalikButerin/status/1207344524235689987 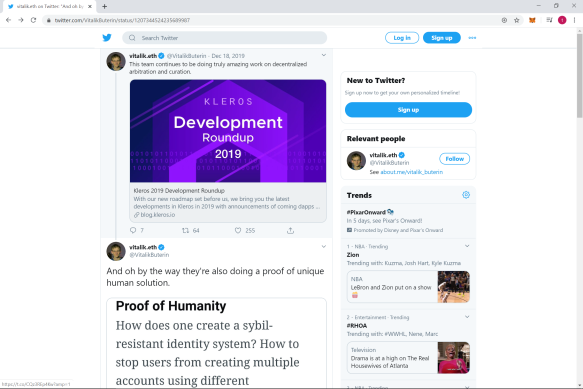 Here he tweets about Kleros's curated registry being used in a Uniswap frontend (Kleros is being used to handle disputes in exchange listing procedures):  https://twitter.com/VitalikButerin/status/1179323484318687232 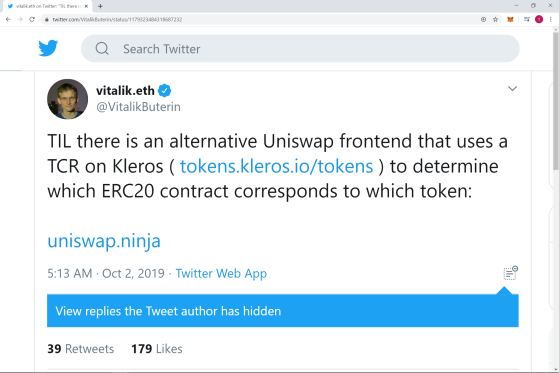 And here he is again, talking about Kleros at EthNewYork:  https://www.youtube.com/watch?v=6LbRtvdRVBw&t=34m01s 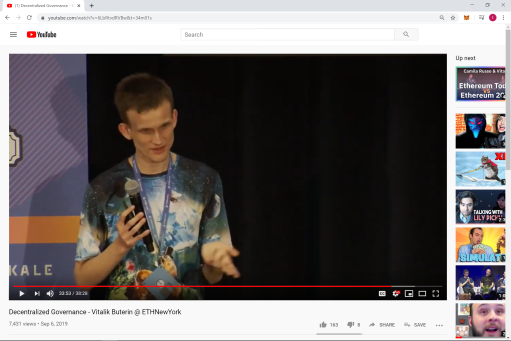 If that isn't enough to convince you of the fact that Vitalik is a Kleros fan, then take a look at the schedule for the upcoming EthCC schedule.  Vitalik and Clement Lesaege, the mind behind Kleros, are scheduled to give speeches in the same room, the Theatre (the main event), just a few hours apart from one another.

From what I can tell, Kleros has 5 speakers scheduled at EthCC, which makes Kleros one of the most represented projects at the Ethereum Community Conference, beginning on March 3rc in Paris, France. 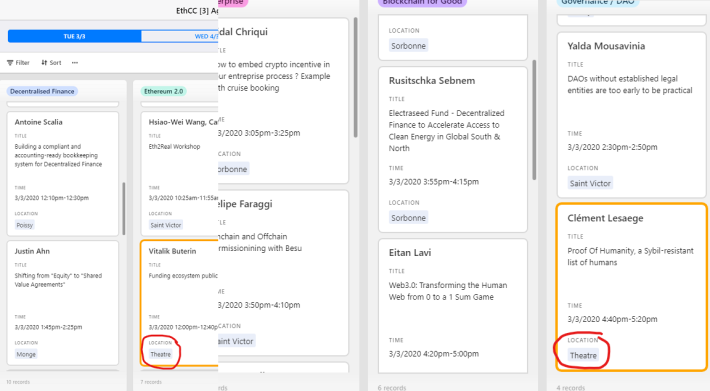 Today, March 2nd, the Kleros team is holding Dispute Revolution: the Birth of Decentralized Justice https://blog.kleros.io/dispute-revolution-decentralized-justice-takes-over-paris/.  This conference, also in Paris, is another great bit of publicity for the Kleros team, who have already had success in attracting big names in online dispute resolution.

Here is an interview that Kleros conducted with Colin Rule, a VP at Tyler Technologies: https://blog.kleros.io/the-godfather-of-online-dispute-resolution-speaks-with-kleros/.  Colin Rule notably "created eBay's user dispute resolution in the 1990's and then the ebay Community Court." 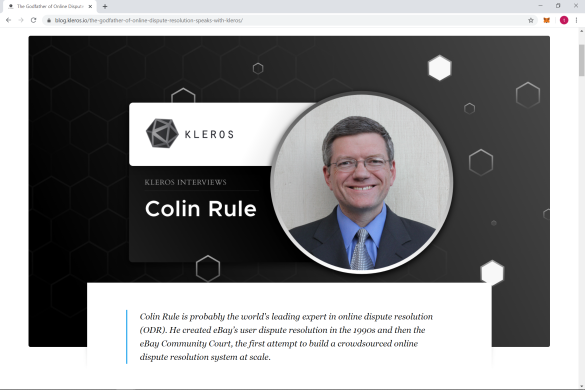 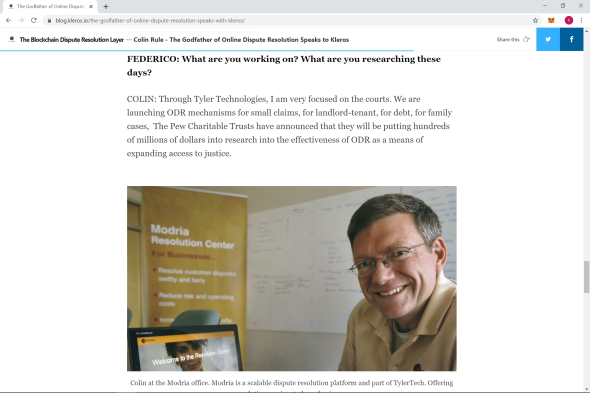 Colin Rule @crule ever recently tweeted about how online dispute resolution can "reduce resolution times by 50%" and "reduce court backlogs and increase access to justice." 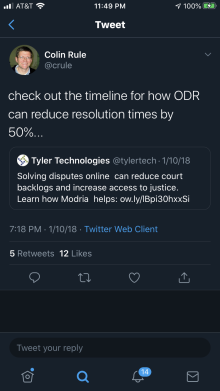 While Colin Rule is a sort of big-wig of the online dispute resolution industry, I doubt that Kleros will be used to solve cases in local government, especially not in the near future.  But he tweets about Kleros a lot and is clearly interested in the project. 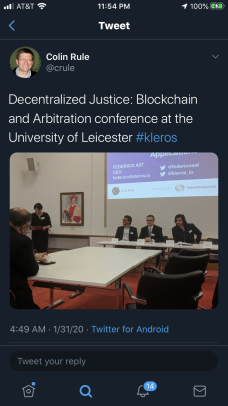 In addition to being talked about by big names in the industry, it helps that Kleros comes out of the reliable Thomson Reuters incubator which is partnered with Amazon Web Services and Oracle.

Lastly, I thought that I should mention that Pinakion (PNK) has come to dominate the 4chan /biz/ message board over the last couple of months.  At any given moment there are usually 4 or 5 threads about Kleros.  While this might seem like a bit of a bullshit reason to a lot of people, the last time this kind of attention was given to any cryptocurrency on /biz/ that cryptocurrency was Chainlink (LINK).  These are the crazy internet people that found Chainlink at ICO and have been making memes about it since back when it was below 50 cents.  Its now above $4 and, if anything, these people are even more adamant about never dropping their LINK bags.  Its that kind of faith that has given Pinakion price stability since its recent pump, despite its low volume.  People are buying and holding this token with iron hands.

To a lot of you, my take on Kleros is going to seem like a whole lot of speculation, which, I suppose that it is.  They have only tried 164 cases, there have only been 91  jurors drawn, the price is hovering around 2 cents, and I'm not selling my Pinakion for anything at the moment. 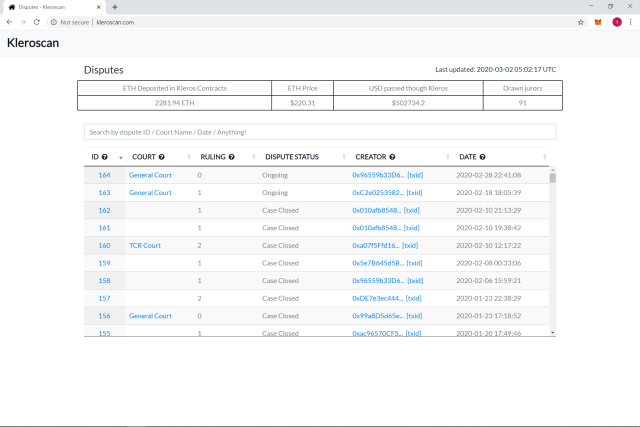 If you want to grab a bag of PNK, the "make it" stack is usually said to be around 100,000.  Of course, most people don't really set their portfolio's up with the plan to get rich off of any one holding.  I'm not going to tell you to go buy 100,000 Pinakion.  This is a decision you have to make on your own.  I'm just laying out my case, its up to you to vote.  As of now, the best option, or easiest option at least, for buying PNK is on Uniswap.  You just link your MetaMask and swap Ethereum or any ERC-20 token for PNK.  Most courts require around 20,000 PNK to stake for juror selection, so if you plan on becoming a juror, then that may be a solid starting point.

Personally, I could see PNK reaching around 10 cents by the end of the month since they are going to be rubbing shoulders with so many industry elites.  By the end of the year, it is entirely possible that this token will be trading at $1.00 as Kleros on-boards clients.  I'm excited for more and more cases to get added as more and more DApps decide to use Kleros for their dispute resolution.  If you need me, I'll be dispensing justice from my comfy chair. 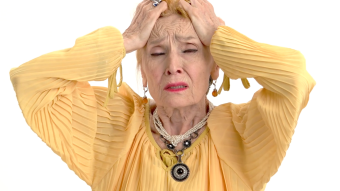