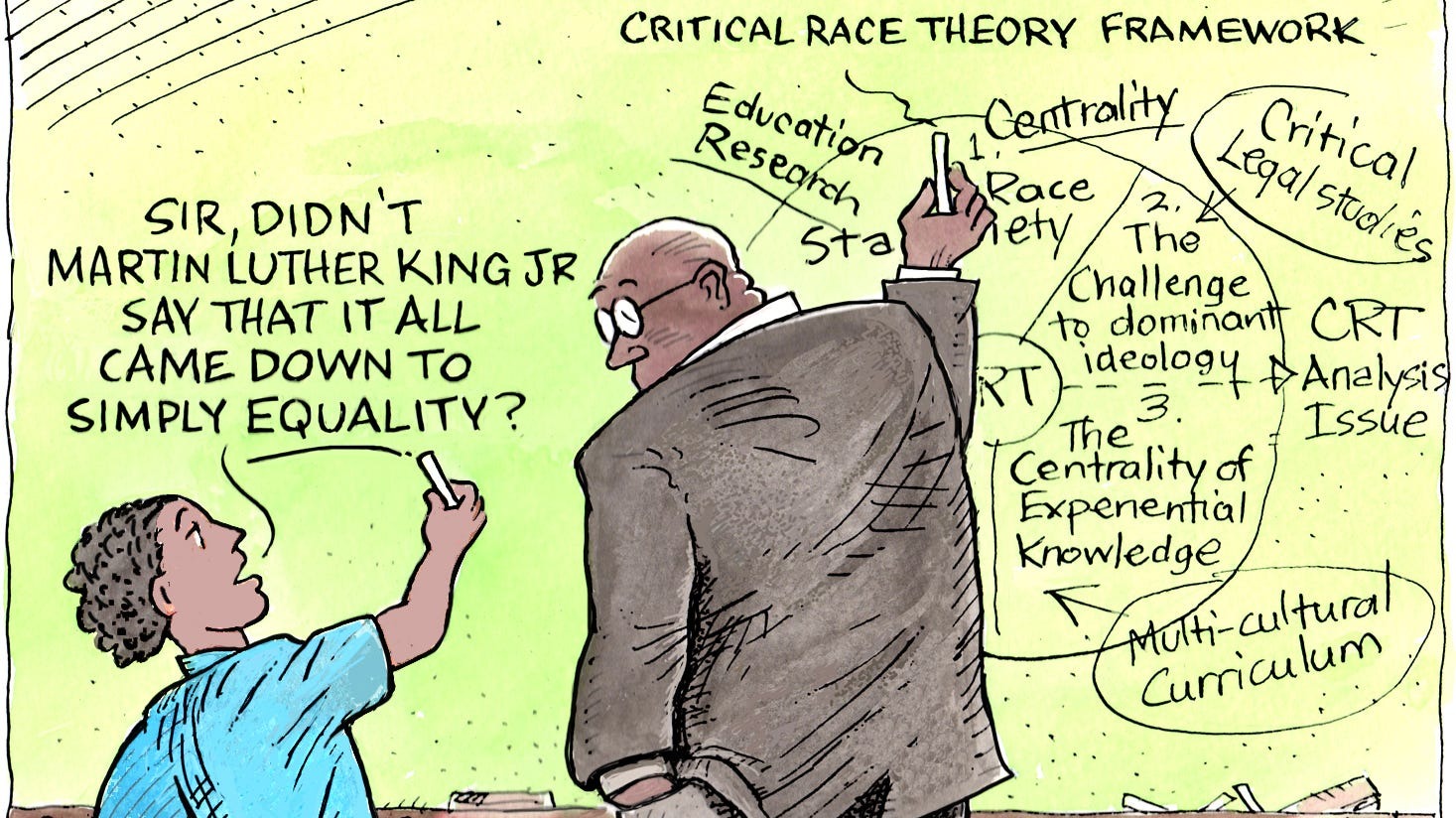 What is Critical Race Theory (hereinafter CRT)? It is a movement within the United States by civil rights educators and scholars seeking to examine social, cultural, economic, and legal issues as the same relates to race and racism. CRT "... has stirred controversy in the United States since the 1980s for deviating from the ideal of color blindness, promoting the use of narrative in legal studies, advocating for the use of 'legal instrumentalism' as opposed to ideal-driven uses of the law, analyzing the U.S. Constitution and existing law as constructed according to and perpetuating racial power, and encouraging legal scholars to promote racial equity" [Ansell, Amy (2008). "Critical Race Theory". In Schaefer, Richard T. (ed.). Encyclopedia of Race, Ethnicity, and Society. Sage. pp. 344–346. ISBN 978-1412926942.]

"Key tenets of the theory mostly agreed upon by proponents are that racism is a common experience faced by people of color in the United States, that it is institutional in the U.S. and that it benefits whites." [Adams, Dwight. What we know about the critical race theory controversy, impact on Indiana education. Indianapolis Star. https://www.indystar.com/story/news/education/2021/05/11/what-critical-race-theory-heres-why-its-controversial-indiana/5035542001/ . Accessed May 12, 2021]. The concept of 'systemic racism' lies at the heart of CRT through its attempts to validate white privilege.

In the United States there is an ongoing effort to inject CRT into the curriculum of the nation's schools. At its simplest, proponents of CRT assert that racial equity teaching is necessary to address the removal of systematic barriers restricting students of color advancement and that CRT is necessary for the creation of a totally inclusive school environment. Critics however oppose injecting race into the school's curriculum advocating the retention of a colorblind educational system.

While the issues surrounding CRT and its inclusion in education are being hotly debated by state legislatures, local school boards, parents and students alike, many schools are going ahead with the implementation of CRT within the curriculum. This inclusion of a CRT based curriculum is being seen both in private as well as public educational institutions at a high rate of adoption.

The crux of this article is not to take a stand for or against CRT, but rather to examine the opinions of a majority of parents of school aged children as it relates to the inclusion of a CRT based paradigm into their child's curriculum. From a review of the extensive writings on the subject, it is clear that the majority of parent's oppose and are even angered by the inclusion of CRT in their child's school curriculum.

As more and more parents as well as educators join the ranks of opposition to the inclusion of wokeism through CRT in their children's schools opportunities for change arise. With respect to Private Schools. this change may come in the form of a reduction in woke rhetoric in teachings assuming enough parents object and it may hurt the Private School's bottom line. However, it is more likely that change will come in the form of parents exercising their school choice options by choosing a school focusing on learning and teaching absent the political indoctrination inherent in CRT.

As the option for alternatives grows, the educational sector approaches a ripeness for 'creative destruction'. "The term creative destruction was popularized by economist Joseph Schumpeter in his 1942 book, Capitalism, Socialism, and Democracy, to describe the dynamic process of new business models and organizations replacing outdated or inadequate enterprises. He explained that capitalism is 'the perennial gale of creative destruction,' fueled by entrepreneurship and innovation." [Schumpeter, Joseph. (1942). Capitalism, Socialism, and Democracy. Reprinted, Third Ed., Harper Perennial Modern Thought. (November 4, 2008). As a result, it is opined that a new paradigm will arise in education balancing traditional colorblind learning and teaching with tempered inclusion of diversity and racial equality.

Parental demands may succeed in forcing Private Schools to offer alternatives to woke CRT education through the sheer manipulation of free market capitalism as theorized by Schumpeter. But the Public School system is markedly less responsive to market demands as a result of their role in mandatory education. The Public Schools are likewise adopting woke CRT educational formats at the same growing rates exposed in the Private School sector. 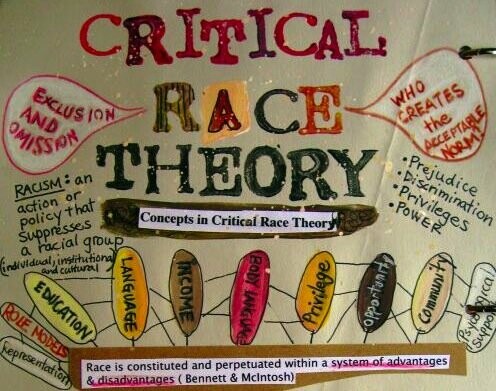 Generally, the majority of parents objecting to woke CRT in their schools voice their preference for an emphasis on academics in place of woke CRT activism. However, unlike the more affluent in the Private School arena, these parents lack the economic clout to seek alternatives to mandatory Public Schools. In effect, they face a monetary barrier to the alternatives available to the more affluent. In response thereto, State Legislatures in some two dozen states are working to change the laws and expand educational choice policies enabling more families to choose their preferential setting for learning.

In some states, regarding Public Schools, Legislatures attempting to assuage parents who oppose woke CRT teaching are enacting laws that go far beyond school choice. In Tennessee, the General Assembly enacted legislation absolutely banning the teaching of CRT in its Public Schools. This law went further by containing a threat that funds would be withheld from schools teaching white privilege theories. The Governor of the State of Idaho signed a similar law into effect covering all Public Schools in the State. And Texas Republicans are pushing for an outright ban on the teaching of CRT in its schools.

Your author closes this article with a simple but profound word of advice. Both proponents and opponents of woke CRT education should heed the well-known teachings of Dr. Martin Luther King who said we should not be judged by the color of our skin, but by the content of our character. Middle ground must be sought to address this issue and time will most likely provide the needed balance to satisfy both sides of this socio-political powder-keg.