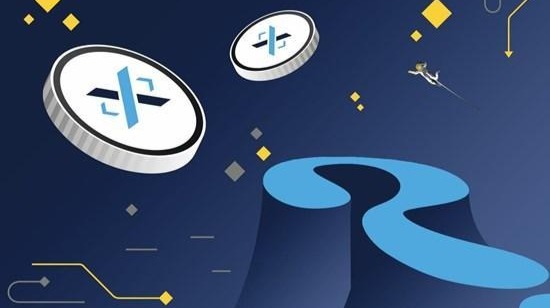 I'm a huge fan of yield farming and specialize in Tomb Forks on the Binance Smart Chain (BSC) due to the low fees on the network and many options that exist. Tomb Forks are protocols that take the code from the Tomb Finance protocol. These protocols have unique ecosystems based on a native coin pegged to another token, in the case of Tomb Finance their token is pegged to Fantom (FTM) and sits on the Fantom Opera network.

Dex Finance is a decentralized autonomous organization (DAO) that pegs their native coin USDEX to the stablecoin USD Coin (USDC) which is considered the safest of all the stablecoins. This is one of the many brilliant aspects of Dex Finance which sets it apart from similar protocols and makes it a great choice in both bull and bear markets. USD Coin is one of the three main coins I focus on in my portfolio along with Bitcoin (BTC) and Ethereum (ETH). Holding USDC in your portfolio helps reduce the overall volatility of the other two coins. The problem with holding USDC is the loss of purchasing power due to inflation, however, this can easily be offset by using a protocol whose rewards far outpace inflation like Dex Finance which launched in May of 2022.

Most Tomb Forks rely on investors to maintain the price of their pegged coin. They use "bonds" which allows investors to purchase future tokens at current prices when the token is below peg. This puts an upward price pressure on the coin to move it back to coin. Unfortunately, if the coin never returns to peg the bonds are worthless so there is a lot riding on the community. Dex Finance doesn't use bonds and rely on investors to maintain peg, instead they use smart contracts allowing the protocol’s underlying mechanism to dynamically buy and sell the supply of USDEX, pushing its price up or down relative to the price of USDC. 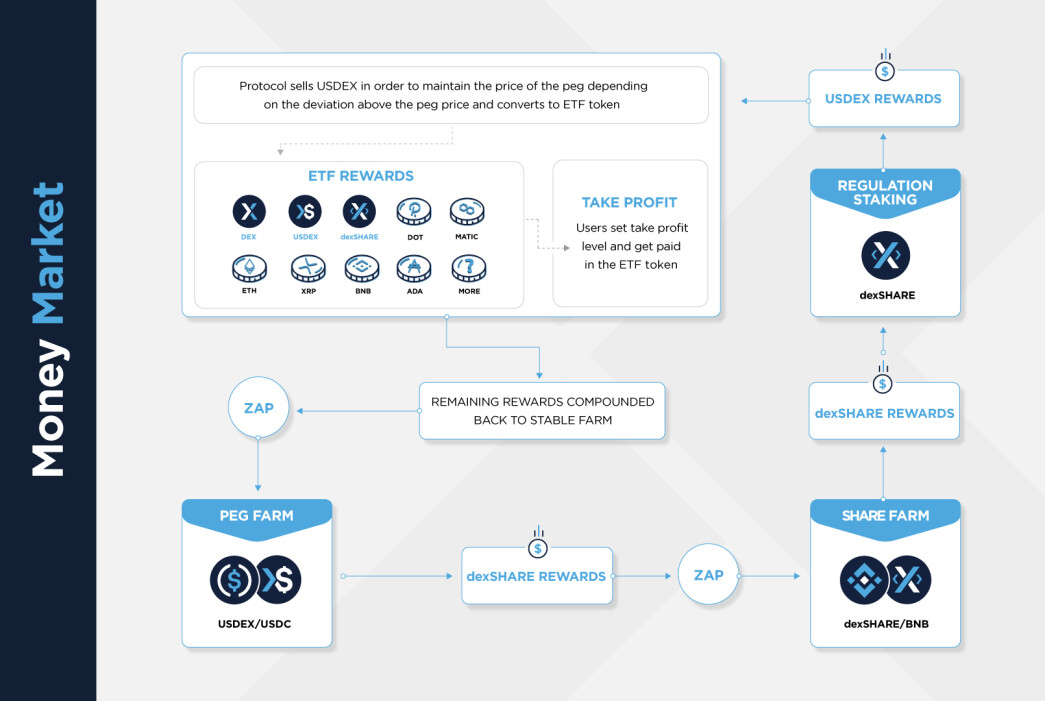 This unique way of maintaining peg sets the protocol apart from others making it healthy regardless of what investors are doing within the system and allows it to continuously pay its investors. The entire ecosystem is set up as a "money market" as outlined in the diagram above.

Like all Tomb Forks the main engine of the protocol is the farms, specifically the farm that matches their native coin to the pegged coin. In the case of Dex Finance, that is the USDEX-USDC farm. The reason I love pegged coin farms is they virtually eliminate "impermanent loss" associated with other types of yield farms since the coins always maintain the same value ratio. The rewards here are impressive with an APR (annual percentage rate) that has remained above 300%. Think about that, you are getting huge returns without impermanent loss on a stablecoin pair.

As with other Tomb Forks, Dex Finance does offer other farms including their rewards token DEXSHARE paired with BNB. This DEXSHARE-BNB farm does offer an even higher APR, however does come with impermanent loss risk and is based on volatile assets. I generally allocate a small percentage of my investments in Tomb Forks to the rewards token farm, but do not want too much exposure here. Their third farm matches two of the platform's own tokens, again like most Tomb Forks, but I never personally get involved in these farms.

Once you have your farm up and running you are paid constantly in their reward token DEXSHARE. But what do you do with DEXSHARE?

Most Tomb Forks have a "Boardroom" which is an area of the protocol to stake their reward token and earn their native token. Generally, these are paid out in EPOCHs or periods of time such as every six hours. To pay out, the TWAP (time weighted average price) of their native token has to remain above peg over the EPOCH.

In Dex Finance, they call this area Regulation and it works differently than most Tomb Forks. First, it pays out continually so you don't have to wait for an EPOCH to conclude to get your rewards. Furthermore, they do not pay out in their native coin USDEX but instead pay out in something called DEXETF which is very unique and explained below. While many Tomb Forks can struggle to stay above peg, this doesn't appear to be the case with Dex Finance as they tend to stay well above their peg of 1 USDC typically hovering around the $1.40 mark meaning this area of the platform is almost always paying out.

Getting paid out of Regulation in DEXETF is one of the more unique features to the protocol. For those familiar with stocks, an ETF is an exchange-traded fund which is similar to a mutual fund but is typically an index that tracks a particular asset or group of assets. The DEXETF is similar in that it tracks a group of cryptocurrency assets. 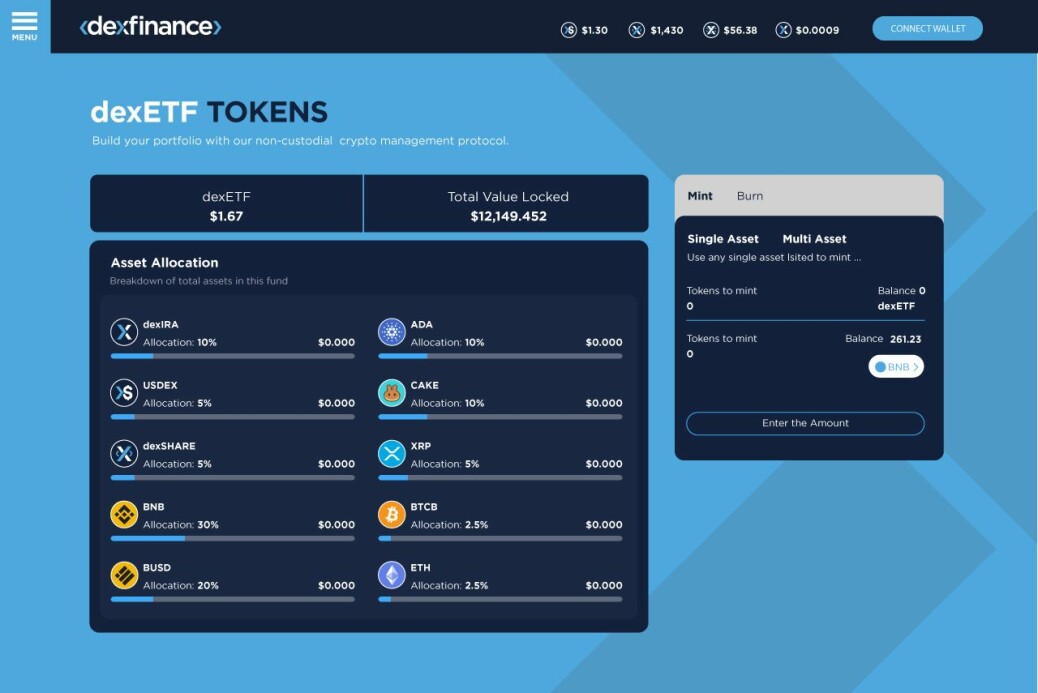 Essentially, you are rewarded in a full portfolio of blue chip cryptocurrencies so as the market grows your holdings grow along with it. Since DEXETF is a token, you can sell your token or "burn" (convert) it to USDC, BNB, BUSD or other tokens.

Before the launch of Dex Finance the developers already had DEXIRA. In the finance world an IRA is an individual retirement account which is an investment aimed at helping one retire. The DEXIRA was launched with a similar aim, however focused on cryptocurrencies instead of stocks in something similar to a money market fund.

By holding DEX tokens, the DEXIRA allows you to get paid out in the currency of your choice, over 20 in total, with the default being BNB. This is a long-term play with a 30% sales tax waived for tokens held over a year. In order to participate you must hold over 10,000 DEX tokens which may sound like a lot but works out to roughly $50. 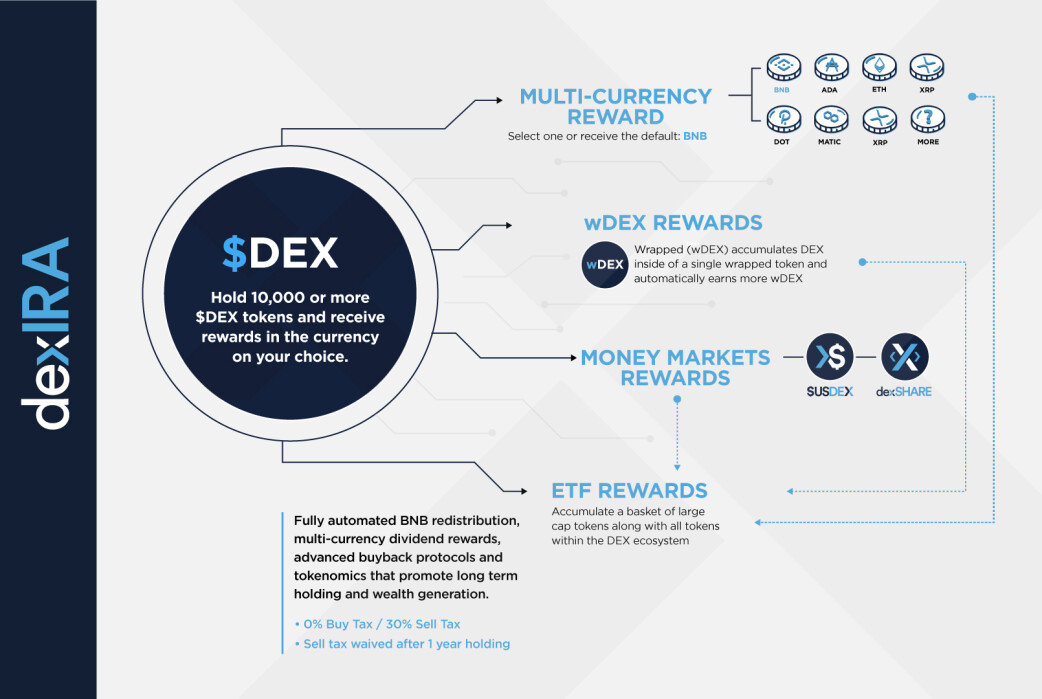 Dex Finance has been my best performing asset during the bear market. While it is a complex system, one can start by getting into the USDEX-USDC farm and taking the rewards from that and staking them into the Regulation section. I really like the unique features that separate it from other Tomb Forks including the manner in which the protocol maintains peg. The fact that the coin is tied to USDC is a huge plus as their tokens expose you to blue chip cryptocurrencies. Being able to choose what token you would like to be paid out in is also a great feature. You can find more information in their documentation.

Being a new protocol, there will be new features added including a unique take on bonds that aren't needed to help maintain peg. They will also be adding dexPAD allowing you to participate in crypto project launches via your DEXIRA tokens. They will also be adding ways to "zap" into one of three strategies - conservative, balanced, and aggressive soon which will automate everything for you. If interested in finding out more, there are a few YouTube videos out there on the protocol that can be found here.