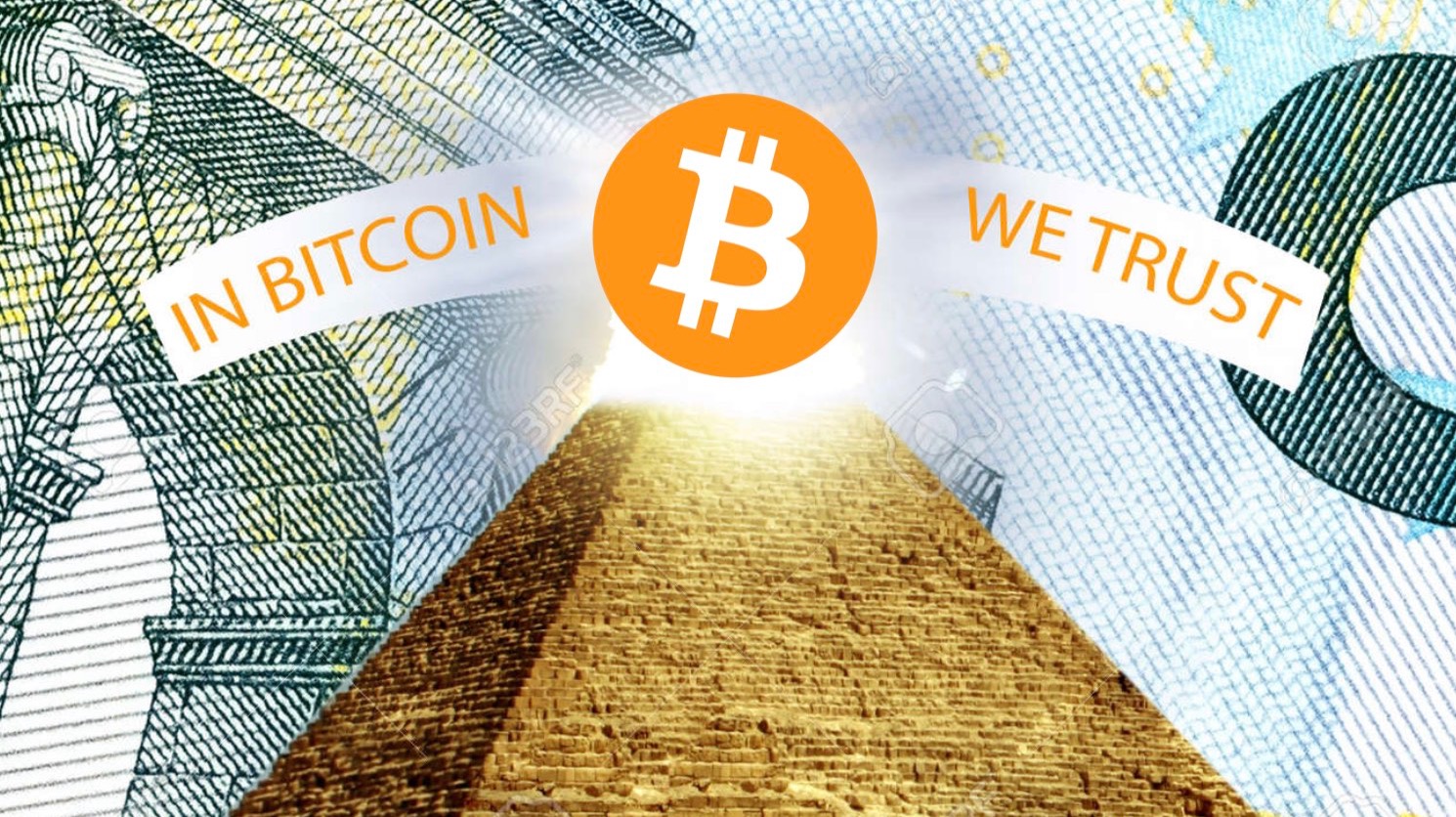 There are No Gods in Bitcoin & Crypto

There are No Gods in Bitcoin and Crypto. That is a sentence that may sound obvious, and even a bit sensical, but the longer that you have been investing in crypto, the more you will come to understand that phrase. Even more importantly, a fact that you always need to remember.  Days come and go, people will also come and go to this market, but greed is a thing that never leaves.  We have all felt it ourselves.  The extreme joy and hype while prices are soaring upwards.  And then the depression that comes when the bottom falls out of the price.  At that moment, our mind is already thinking about how we can get that money back that we had just moments before had, or perhaps you're already brainstorming about how you can accumulate even more coins now while they are cheap.  The fact is that greed is in all of us, and that doesn't mean it is a bad thing.  But, this is the crucial thing to always keep etched into your memory.  If we have greed, you can also count on the top players in the crypto space also having greed.

They may come across as pure to their cause or mission.  A true ally to the coin that they are currently devoted to.  But that can all change in a heartbeat.  This is something that bitcoiners have learned the hard way over the years.  Some of the top people in the bitcoin space, people we considered to be true contributors to bitcoin to not only the code itself, but also key people behind promoting it to the masses.  Countless amounts of these people have turned their backs on what they originally stood for.  Bitcoiners went from a stage of adoring these people, thinking they were heroes in the space, that they could really help bitcoin go mainstream.  And then, had to divorce or exile them out of the space. Just a few that have come to mind throughout the years are Gavin Andresen, Roger Ver, Andre Cronje, Elon Musk and the list goes on.  There is a fair criticism that bitcoin maximalists are potentially too strict on their own, and can cause the space to become toxic.  Even sometimes I agree with that.  But, there is a reason for all of this.  Bitcoin has had the longest lifespan of any of the cryptocurrencies out there and has seen the most as well.  Seen the bad actors, hundreds of pump and dump projects that have come and gone.  Influencers who begin as honest and loyal to their user base, only to become a shill and talk about anything that advertisers pay them to.  The same narratives always repeat each market cycle.  "Bitcoin prices up too slowly, let's invest in altcoins where you could get a 100x."  But then the cycle comes to an end, and altcoins bleed horribly.  Many of them never recovering.  It must be said that bitcoin will also drop significantly during these times as well, but nothing like those hidden-gem altcoins that YouTubers had been shilling in previous weeks. 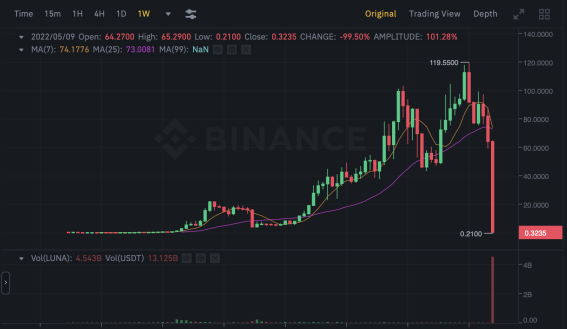 That brings us to the huge news that everyone is talking about this week, the collapse of UST and Terra Luna. With Luna dropping from nearly $100, all the down to $0.30. Just a few weeks ago Do Kwon, the co-creator of Terra Luna, and the man in-charge of running UST had quickly become considered a God in the crypto space.  The man that would make "numbers go up," that would help everyone get profits.  Of course Luna holders were happy, because they had already seen thousands percent gains already.  But after he decided to buy billions of dollars worth of bitcoin to back his stablecoin, a move that would help pump bitcoin and also the market in general.  That was a move that brought many bitcoiners to his side.  Even a few notable bitcoin maxi's began to consider Luna or UST a useful product for the industry.  Perhaps with this potential financial greed blocking their vision, they began to look past the potential dangers that may lay ahead.  Everyone knew the risk, but everyone was too excited to talk about them, because bitcoin was finally going back up again in price.  The talks had already begun that this UST buying bitcoin action would be a catalyst that would send bitcoin's price to $100k. Of course we now know the risk was all too real, and happened much sooner than most of us probably could have imagined.

But if we had been able to look past our greed, there were red flags appearing everywhere.  For one, Do Kwon, a Layer 1 blockchain creator was behaving in ways that we never see other Layer 1 creators behave, especially those that are in the top 10 in-terms of market cap.  He was behaving rash, immature and in a toxic manner.  Just take a look at a few of his posts and replies on Twitter. 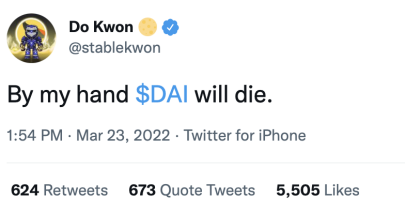 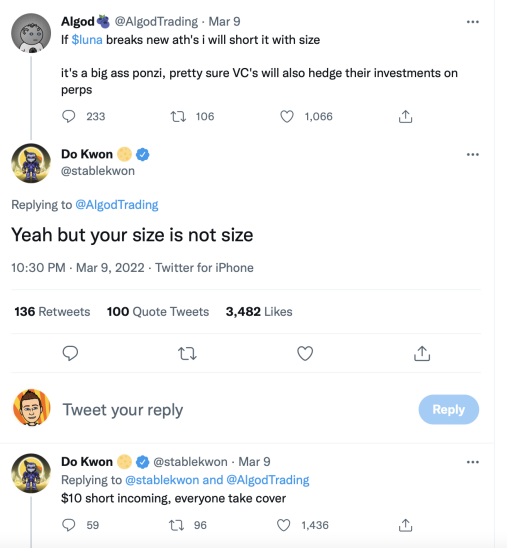 As if the Tweets weren't bad enough and a clear sign that we should be all very careful about investing into Terra Luna or UST.  But the thing that is disappointing is that investors were just eating this up and enjoying it.  They fed into this type of attitude or mindset, and would treat fans of other blockchains in the same manner.  They adopted this style and took it with pride.

Of course, everything is easy to see and say after the fact.  While everything is happening, it can much more difficult to notice.  Especially while prices are going up. Another thing to note, is that while Do Kwon was arrogant, it's very likely he had no intention of this ever happening, and that it was out of his control, a real black-swan type of moment.  Even with that said, we have to always remember that whatever you decide to invest into cryptocurrency, could go to zero and you have to be ready for that fact.

That is why I prefer to invest mainly in the two crypto blue chips.  Mostly bitcoin, and then also ethereum.  I have gotten flack in the past about not venturing out enough into other altcoins to make bigger gains.  This is exactly why I don't. Investing into crypto is already very risky.  I prefer to minimize my risk by sticking to coins that I trust like bitcoin, even though my gains in-terms of percentage may be lower than if I chose riskier options.

This won't be the last time this situation happens too.  It's something that repeats over and over.  So remember this time when you see the next can't-miss project.  Because, there's actually a large chance that it could miss.  Avoid listening to what crypto influencers preach and form your own opinions.  Once you have learned how to research projects and find the real winning projects, and not have your mind swayed by influencers or the hype coin of the month.  That is when you're on the path to winning.

It might be boring, but the whole just buying bitcoin and HODLing idea might just be the safest and least stressful option out there, with a lot of gain potential still in the future.

Also, thank you for your patience, I have been out with Covid the last week and more.