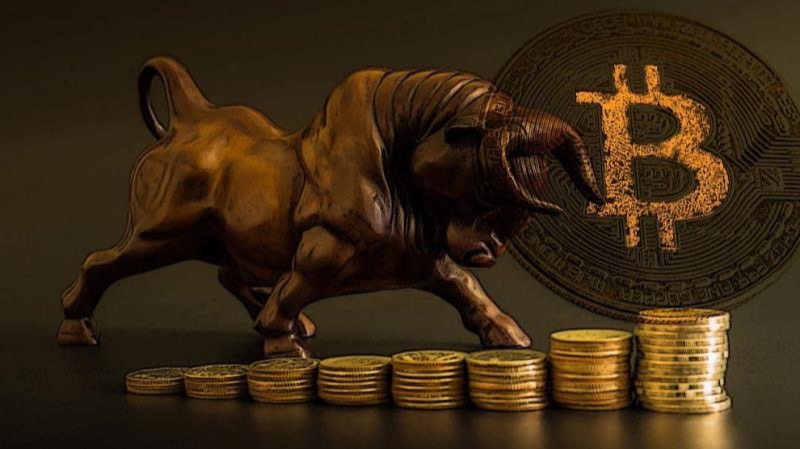 There is a lot of fear in the market right now, and that has many people wondering if we are actually still in the bull cycle, or if we have entered a bear cycle that we won't be able to escape from for a few years.  Is this just a great buying opportunity and we will later see the price spike back upwards, or is it time to pack up and declare the bull market finished.

As I mentioned above, there is a lot of fear in the market currently, and rightfully so.  There are a multitude of things that are happening in the macro landscape.  Just like during the summer of 2021, which kept seeing FUD after FUD announcement that would send the price of bitcoin lower until it eventually reached a low of $28k, until it would fend off each one and fight its way back upwards to a new all-time high price of $69k.

We are seeing the same onslaught of bad news this time around as well.  The difference this time is that these FUD announcements aren't just focused on bitcoin or the cryptocurrency market, but focused on macro markets and the world in general.

The first thing that has been a constant in the recent price downturn is the whole Covid situation.  Each time there is a new Covid string that is discovered and spread around the world; this has caused the markets to panic each time.  Omicron began to spread almost exactly the same time that bitcoin was at its bitcoin.  Throughout the last year, after the panic cools down, bitcoin begins to move upwards again.  But, each time there has been a new strain, the price of the BTC has suffered.

Then there is the whole inflation and interest rate situation.  The world is watching what the USA will do, as it is the largest financial sector in the world and also control the dollar, the world reserve currency.  Inflation has gotten out of control in the USA, due to the excessive money printing that took place during Covid.  And now they are attempting to correct this by decreasing the spending budget of the government, and also by raising interest rates.  The later has spooked the financial markets once again, and there is fear that not only could this cause bitcoin to go into a bear market, but it could cause the USA and even the world to go into a recession as well.

Finally, there is a recent panic of the situation that is happening between Russia, Ukraine, and how the rest of the world will react.  Causing people to fear that a world war may be possible.  While I will not be going into depth on this topic, it is something that could have an absolutely huge impact on not only bitcoin markets, but all markets.  We should all be paying extremely close attention to this situation.

All of these things, along with traders using too much leverage, retail buyers panicking and selling have all caused bitcoin's price to drop to $32k.  Which was nearly a 54% price drop from it's all-time high price.  It has since gone back up to $37k, but the question is if this is a short term bounce, or will things start to look better? 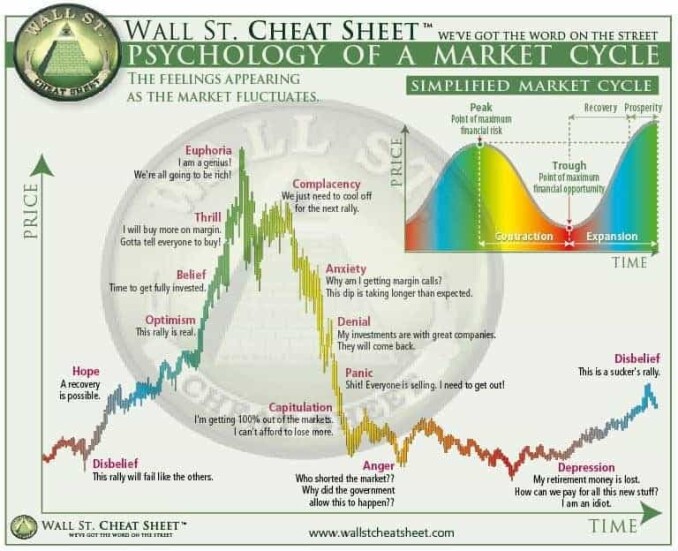 Looking at the above chart, where do you think we fall into it at this point of the cycle?

As always, I remain very bullish for the future of bitcoin.  The price action of today, tomorrow or even next month is of very little concern to me.  I'm more concerned about the price a year or 5 years from now.  There were 3 reasons I posted above for the current bitcoin price downward movement. The first two; covid and inflation are two things that bitcoin can win out against.  It is only a matter of living through the initial shock announcement that sends the market into a panic.  One of bitcoin's greatest strengths is how liquid it is.  But, during these moments of panic that also makes it the most vulnerable to sell offs.  Many of these announcements happen while other markets are closed at night or on the weekend.  Therefore the only thing that can be sold is crypto, and people will sell it like hot cakes.

That is often why bitcoin sees a sell off that happens before the equities market and is often larger as well.  But, it often sees its recover quicker as well.  Think back to the covid price crash of March 2020.  Bitcoin crashed before the stock market, and also saw its price begin to recover days before the equity market saw its own march towards recovery.  The same will happen in this situation.

If any of those situations take place, I believe we maintain the bull cycle and will march towards new all-time high prices sooner than you might expect.

However, if that 3rd possible situation with Russia takes place, all of the markets will get ugly.  Which I believe would send us into a bear cycle.  Who knows if that situation will actually happen, but it is something we all need to be watching carefully.

As you can see, the market is still in fear.  Although it is a little better since the price spike that happened yesterday.  If you pay attention to Crypto Twitter, it has become a timeline of people that are incredibly bearish and have lost a lot of money or hope.

While it may sound like a sales pitch to many, but this could actually mean that we are close to the price bottom or have already hit it.  It is often when every one feels the market is lost, that we will definitely be going lower, when we actually do the opposite.  This is actually the best time to be buying bitcoin and building up your portfolio.  When bitcoin was in the $60k range, we would have all been thrilled to have another chance to buy at the $30k range.  The funny thing is that once that has finally happened, people are filled will fear and have lost their conviction.  This causes them to sit on the sideline, only to watch the price go back up before actually buying.

"Be greedy when others are fearful. Be fearful when others are greedy."  This Warren Buffet quote is truly the golden rule to follow while investing.  The key is that you must first find an amazing asset that you have confidence in.  Once you have found it, never stop accumulating, even during the downturns.  Always remember to invest only what you can afford to lose.

One thing is for certain.  Some days this market can make you feel euphoric, some days it can make you feel depressed, and then there are many days where nothing happens price wise.  But, I enjoy every minute of it.  It is such an exciting market, where there is so much to do, see and learn.  With new things happening everyday.  If you invest correctly today, you will have set yourself up very well for the future.

How about you? Do you think bitcoin is still in the bull market, or have we entered a bear market?