Banned from Twitter? Okay! I never much liked playing there anyway!
Last 2 Days! Join #SwapSpaceExplained Writing Contest and Giveaway with $1,200 in ETH Prizes by CLICKING HERE!

Banned from Twitter? Okay! I never much liked playing there anyway!

For months I've scoffed at conservative pundits claiming that Twitter is stifling free speech. I thought, this is total hyperbole, they are saying offensive things, they are breaking the Terms of Service, they are getting what they deserve.

On March 29, after a conversation about police brutality in the United States, I posted a David Simon quote and a link to his blog, The Audacity of Despair. David Simon is a published author, you may be familiar with The Wire. He used to cover the police beat for the Baltimore Sun, and the subject of the 2015 blog post that I linked on March 29, 2021 was an article the Baltimore Sun ran in March 1992. It's a story about a poor, White drug-addicted homeless man who was living in Baltimore until he crossed paths with the police who killed him. The murder was covered up and no one spoke much about it. The title of the blog, and the words I quoted were, "There is no justice, it's just us." The point of the story and the blog was that the police are out here waging war on the poor, and no one is standing up for their rights. It was refreshing to learn that the police aren't just out here gunning down Black people, they are gunning down Poor people for whom no one really seems to care.

Fast forward to April 28, 2021. My buddy tweets about Rebekah Jones. He comments that Rebekah Jones' standing up to the powers that be in Florida is very punk. It's punk ethos. And it's commendable. I agreed with the comment because my mohawk agreed with the comment! Seriously, I have a mohawk right now and it has strong feelings about the sanctity of Rebekah Jones' life. Anyway, his account self-scrubs so there isn't much to report on, but, someone who realizes that David Simon was banned from Twitter for being too blunt, realized they had a chance to go after my Twitter account because I expressed an opinion on Rebekah Jones standing up for herself. So I've been brigaded. 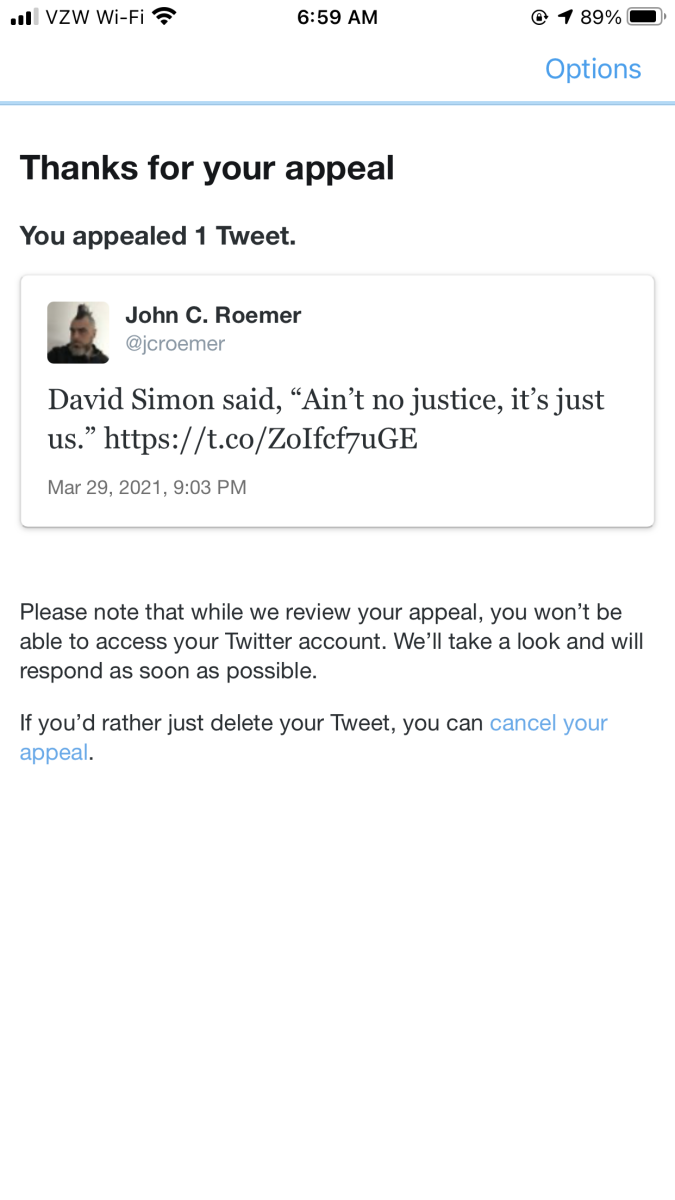 The blog I linked to is here: https://davidsimon.com/aint-no-justice-its-just-us/

Here is where Twitter is supposed to tell me what rules I violated: 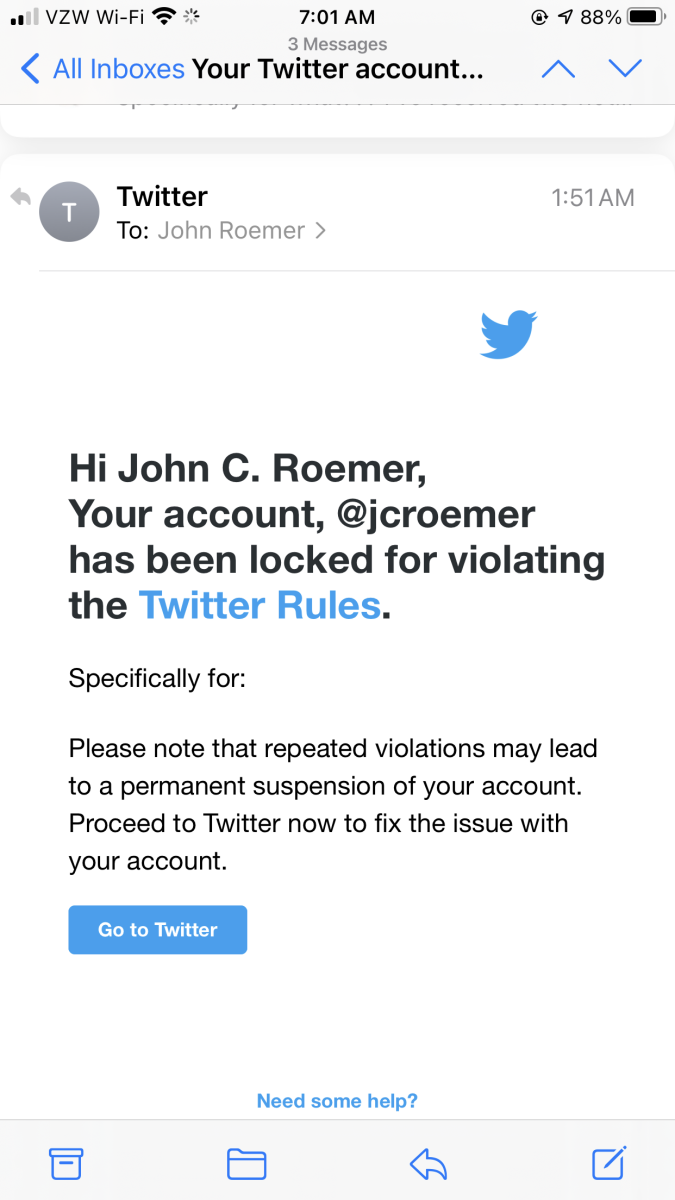 I have two options at this point. I can appeal the decision to suspend my account and wait for a resolution. I do not seem to have much ability to make a case for myself. Twitter has a space on their notification to list the specific rules that were violated. Curiously, mine is blank. Anyone who follows my Twitter would instantly recognize that this was one of the least incendiary tweets in my history.

Apparently, I've found a digital nemesis. I never thought I'd be important enough to have a digital nemesis. This seems to actually lend credibility to my opinions, if they are poignant enough to upset someone to this degree, I might be on to something. Say what it doesn't do to say but needs saying anyway. At least now I know someone is watching.

The suppression of free speech is real on Twitter. I hope that a human intervenes and makes this right. There is no way I will delete that tweet until they can name the rule that it violated. If David Simon hurt Jack Dorsey's feelings, so what? Then make a rule that we can not quote David Simon and let the public decide.

UPDATED: David Simon took up for me, I could not be more tickled, the guy is only one of my main literary heroes! 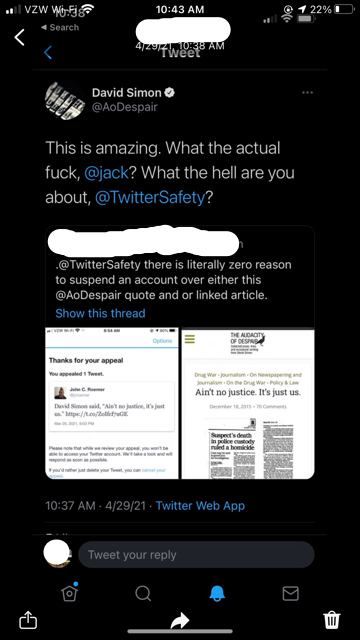 By way of a final update, Twitter turned down my appeal and, for the third time, refused to state the rule that I violated: 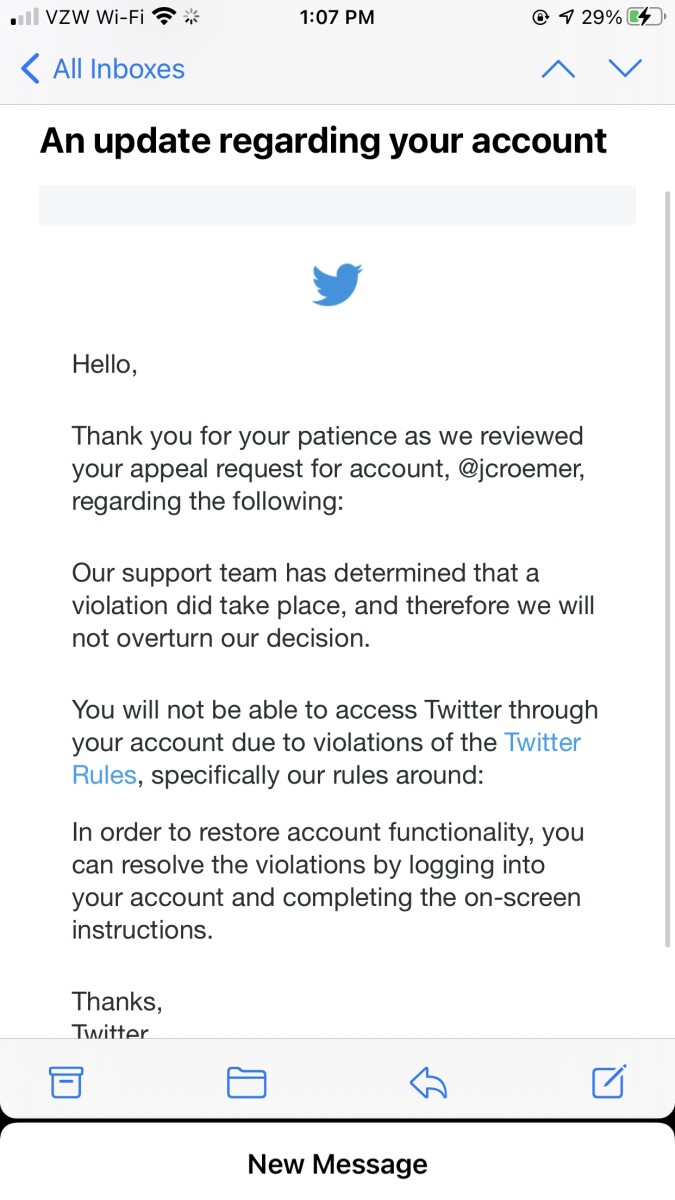 JCR's Current Events and Other Absurdities

A blog documenting the world we are living in now. 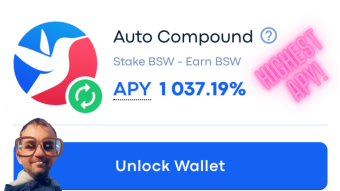 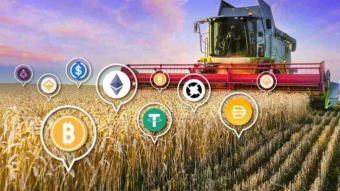