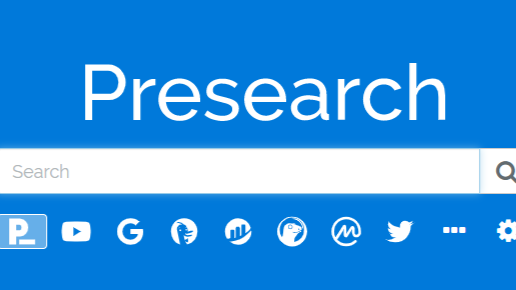 Hey folks, so this is an update from a previous article I wrote about entitled "Is running a Presearch node really worth it?"

Let me preface that I am not a financial advisor, and this is definitely not financial advice. As always, please do your own research to find out what the best investments are for you.

So around a month or so ago, I was doing a deep dive into the math of whether or not I should invest in running a Presearch node. If you're unfamiliar with Presearch, I would invite everyone to check it out, and you can use my referral link, so that we can both get 25 free Presearch tokens: https://presearch.org/signup?rid=3535896. And regardless of whether or not you're interested in running a Presearch node, I really believe and support what they're trying to do, which is to help anonymize web searches by running people's internet activity through different nodes. Thus by running a node yourself, you too can be a part of this movement/project, while also earning staking payouts at the same time. And even if you don't run a node, you can still earn PRE tokens for every search, up to 30 times a day.

Setting Up the Node

In hindsight when I wrote the article, I should have just simply at least bought the required tokens right then and there, because at the time they were trading for around $0.25, but just a short week after, it swiftly rose breaking the $0.40 mark. It's cooled off a bit, and thankfully I didn't buy at the peak, but instead around the $0.33 mark. 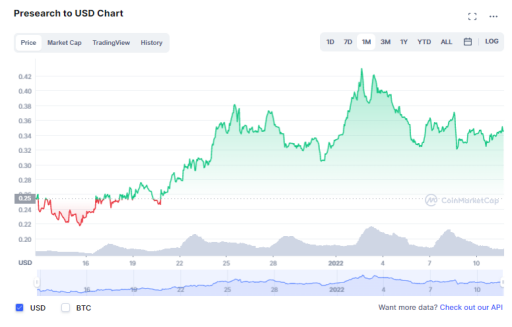 Currently at this time it's sitting around $0.37. So I bought my PRE tokens, then transferred them directly to Presearch.org. I can't remember how much Kucoin's transfer fee was, but I do remember it did seem pretty nominal at the time. The next step was to setup my VPS. I purchased a VPS off of racknerd.com (my referral link). However after purchasing my server, I quickly realized that I could have saved myself a lot of headache by getting a VPS with docker pre-installed (Jeez the things that you learn in hindsight). Why did I choose racknerd? Well not only did they have one of the cheaper prices, but they also had this handy tutorial to let you know how to set it up. I have no programming/formal tech training at all so this was EXTREMELY helpful.

Anyways so I contacted racknerd's customer service who gave me a full refund credit so that I could go ahead and purchase the same VPS with docker pre-installed at exactly the same price. Once again, following all the steps, it was pretty easy to get my node up and running.

So there was a couple of things I didn't realize. The first is that even if no one actually utilizes your node, you essentially still will get staking rewards. I can't really figure out what the actual rate is, mainly because you get extra PRE rewards too when people do use the rewards. (If you do know the exact rate, please feel free to let me know) Also I might be mistaken, but my assumption is that the rewards you get from people's searches are correlative with the current price of PRE. This is also evidenced by search rewards for non-node suppliers, who get rewards for using presearch.org: 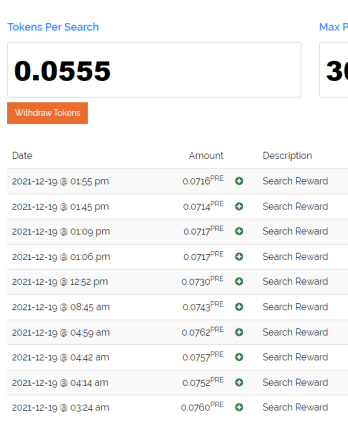 As you can see from the screenshot, back in December when the price of PRE was around $0.25, each search on the Presearch browser was earning around .0760 PRE tokens, whereas today you would be only earning around 0.0555 PRE. This is also compounded by the second thing I learned: it's better to run several nodes than have all your PRE staked on one node, even if you accrue more staked rewards (without searches) by having all your PRE on one node. This is discussed fully in the Presearch docs, and this makes complete sense to me as they're trying to get more nodes up and running. More nodes = more decentralization. In other words, there's more incentive to have two nodes running with a 2,000 PRE balance then to have one node with a 4,000 PRE balance. But this also means that you shouldn't leave a large 'Unlclaimed PRE earned' balance and you should always be restaking your PRE, because a 4,000 PRE node will be accruing more rewards than a 2,000 PRE node.

So my initial prediction for accruing PRE based on other reports that I've read is that I guessed that I would be accumulating around 10.5 PRE a week. Well in reality, after running my server non-stop for a week, I've earned a little more than 6.5 PRE, a far undershot of the projected 10.5.

Is it as profitable as I was hoping? No. Do I regret doing this? Not at all. Actually, I believe and want to support the project so much that I most likely will be setting up more nodes in the future.

Any corrections on my math? If you have a node yourself, have you seen any significant fluctuations in your node search/utilization count?