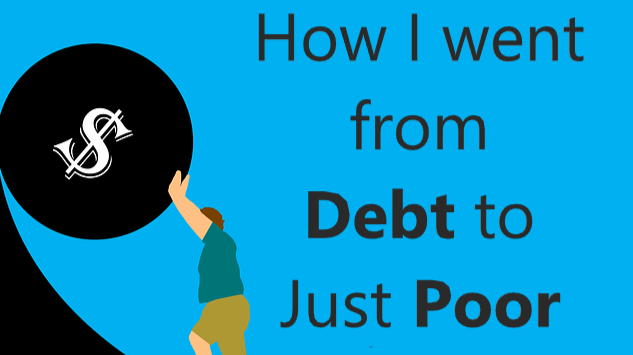 How crypto helped turn a 22K debt into 25K profit

I was pushed into the crypto-verse by a friend and looking back....
I am glad he did so.

In my old life, the pre-crypto one, I was poor and in debt. Now in my new life, I am poor without debt.

Do take into consideration that my definition of poor might have changed over these last 18 months.
So in my pre-crypto life, I have always been in debt, basically, since I was a teenager I spend every penny I could get my hands on.

Because you never know what your last day will be, and you can´t take those pennies with you when you go.

This was my direct debt, in addition, I had a 7600 euro student loan that was waiting to be paid.

And they Did Not live Happily ever After

My debt seems to do the same as good wine, improving over time.

By this time I had fully forgotten about the student loan, I moved to a different country and had not received any letters or did any payments since.

Now I will not blame my ex-wife for everything, because I was in debt when we met, but let´s say she did not make it easier. So once divorced I planned to change things around.

Now just before we divorced, I came into an inheritance, of course, my ex got half. But this allowed me to pay for my divorce and 2000 euro of the 3000 euro bank loan.

More important was that I finally figured out there was a huge difference in the interest you pay for a credit card debt and a bank loan.
Hence I took out a new loan to pay for the credit card debt.

Doing this is not as straightforward as it sounds, because taking out a 7000 Eur loan, to be paid over 7 years, requires several insurances.

Due to these insurances, I will be paying pretty much the same as I previously did during the first 2 years, but after 2 years I was saving a lot of money on interest. And unlike a credit card, I could only pay and not withdraw. So the debt was actually reduced.

I still had those credit cards, fully repaid, and set to end-of-month payments until today.

Due to those changes, and living on a very tight budget for 4 years, I was able to set aside some money for unexpected occasions, and if you do that you ask for such an occasion to happen.

It seems that during my marriage my ex and I were incorrectly informed about where her taxes should be paid. She paid her taxes in the Netherlands and that should have been Spain.

The Spanish Tax Agency has 5 years to check your taxes, anything they find after 5 years will be considered time-barred. Now when this surfaced the Spanish tax agency had about 3 years for which they could still apply her taxes on our mutual income.

Getting back the taxes paid in The Netherlands was possible, but not for me. It required a lot of paperwork, hence it would take months if not years. And well even if she got back some of that money, she was not gonna share.

Because even though we were divorced, I was still (partially) accountable for the time that we were married.

She is receiving a disability pension from The Netherlands and I have a job in Spain. I was afraid that my wages would be garnished if I would let this escalate. Hence I decided to pay all of 5500 in the course of the coming year. And expected to be doing this for another 2 years.

As I am so deep in debt I will wallow in it a bit longer.

Nah, just kidding I don´t want to make this post to turn into an unpleasantly long read, so there is a part 2.