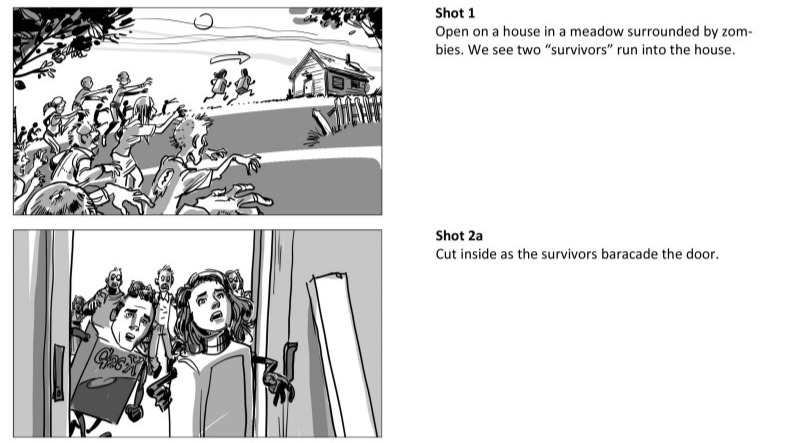 WHAT ARE STORYBOARDS GOOD FOR, ANYWAY?

Hey, we're creative.  Why can't we just grab our cameras and microphones, run out the door, and go shoot our movie right now?  Because we don't have a plan yet, that's why.  Along with a half-decent script, first we need some good storyboards!

What are storyboards good for?  When the inexperienced eye looks at storyboards printed on paper, the pages look to them something like a comic book...  but much harder to read.  To the educated eye, storyboards carry a great deal of information.  Different members of a film crew or animation team look at the storyboard panels, and read all kinds of information relative to their particular jobs.

One might think that producing a storyboard is only about drawing the hero correctly and on-model, but there's far more to it than just making pretty pictures.

1. The director wants to visualize his/her interpretation, pacing and feel of the script.  With an editor, the director creates an animatic of the entire film, with recorded dialogue and sound effects.  That lets the director feel out the timing, and adjust shot transitions slower or faster, be aware of characters’ screen direction, gauge eyelines.  As the animatic develops, a director may want more images, or adjusted images, or new images, to reflect the needs of the story.

2. The director of photography is concerned with the mood of the film, as expressed by camera placements, camera movements, and the lighting of each scene.  The boards, along with the moving version, the animatic, have enough information to allow the DP to decide on which lenses to use, and what lighting may be needed.

3. The production designer is concerned with sets, colors, props, and costumes...  in general, the entire look of the film.  Storyboards give hints about what exactly will be needed, and how much the camera will see.

4. Layout and background artists need boards to know what background images to draw.  If an indication of a scenic background appears in a storyboard frame, the artists now have enough information to begin painting the right picture, from the right camera angle.

5. Animators need to understand their sequence, and how it fits into the rest of the movie.  Good storyboard sequences give the animators strong hints about which character poses to draw, and how to make the power of the story come across to the viewer.

6. The whole production crew needs to know what elements are to be seen in a particular shot, so that they can build sets as needed, and schedule equipment.  Fabricators and armaturists need to know the needs of the elements they will build.

7. The postproduction crew needs to visualize the special effects shots, including the titles and closing sequence.

8. The assistant director needs to know how the crowd scenes will play out.  Hiring and casting decisions can be based on the boards.

9. The stunt coordinator needs to see how each action shot should be choreographed, based on camera position.  Any complicated shot, such as dance or fight scene choreography, or any expensive shot that needs to be done right in a single take, like a car chase, should be thoroughly planned out in storyboard form first.

10. The acting talent looks at storyboards to help visualize the blocking of a scene, or how to play reactions for effects when shot against greenscreen.

11. The location scout needs to know what backgrounds to look for.

12. The producer needs to know that the film's budget will be actually visible on screen, and how to coordinate the work of each team so that the film schedule will be met.

13. The investors need to see and understand what the producer and director are going to do with their money.

Good storyboards can solve a number of problems and answer a lot of production questions during the crucial beginning stages of any movie.  The time and effort put into the shot planning and the visual storytelling early in the production is money and time well spent.

NOW you can go shoot your movie!

Anybody need a good storyboarder, who can work either on-site or remote?  Hit me up via the comments; we'll talk.  Insta: @storyboardpdx

Artist from the Rose City of Emerald Oregon.