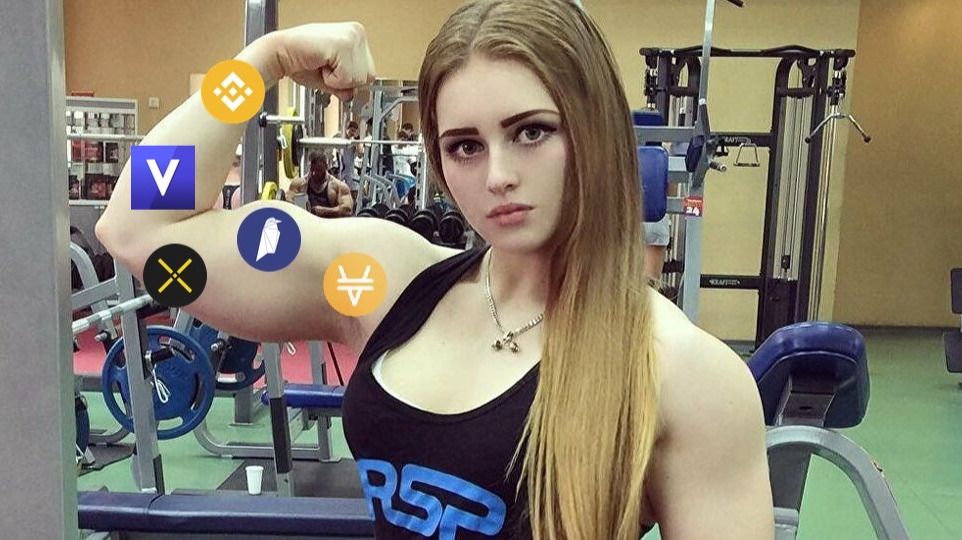 Despite the correction that has been ongoing since Feb. 21, the month of February has been generally bullish for the cryptocurrency industry, with a number of coins reaching new all-time highs.

From the very well-known BNB to much smaller projects, February has been a thrill. This article will take a look at the five coins that increased the most in the month.

RVN was built on a fork of the Bitcoin (BTC) code on Jan. 3 2018. Its code has four major changes relative to that of BTC:

RVN lay dormant price-wise for the majority of 2018-2020. However, a significant upward movement began in the beginning of 2021 that has taken RVN all the way to #55 on the market capitalization rankings.

This is an area which often provides support, so some type of bounce at this level would be likely. 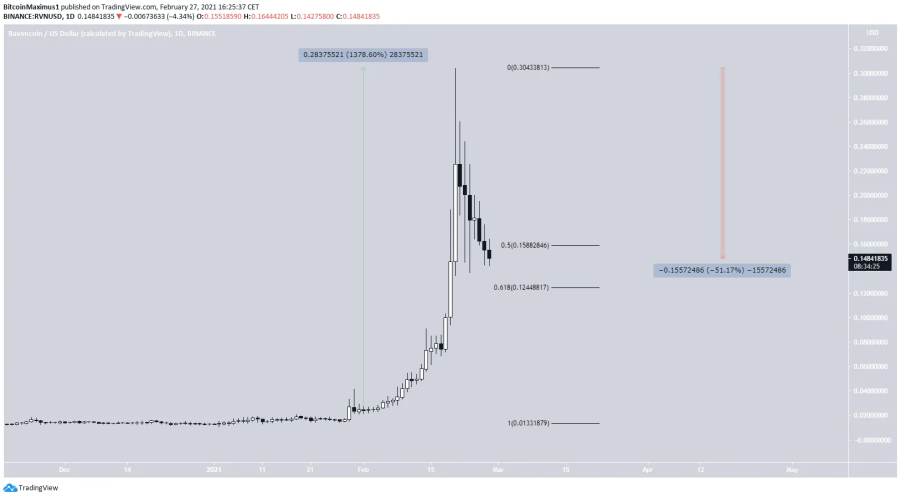 Voyager is an online brokerage firm, which mainly deals with digital assets and cryptocurrencies. Voyager token (VGX) its is official token, which rewards users by generating interest when held. On Jan. 11, Voyager released its growth plan, detailing that more than $350 million in assets were under management.

VGX had a very significant increase in the month of February. However, it was rejected at the long-term $7.80 resistance area, which is the 0.5 Fib retracement level of the entire downward movement measuring from the all-time high price.

Despite this considerable increase, VGX has yet to reach its all-time high price of $15.46, which it reached on 2018. Nevertheless, the current increase brought it all the way to #50 on its market cap. 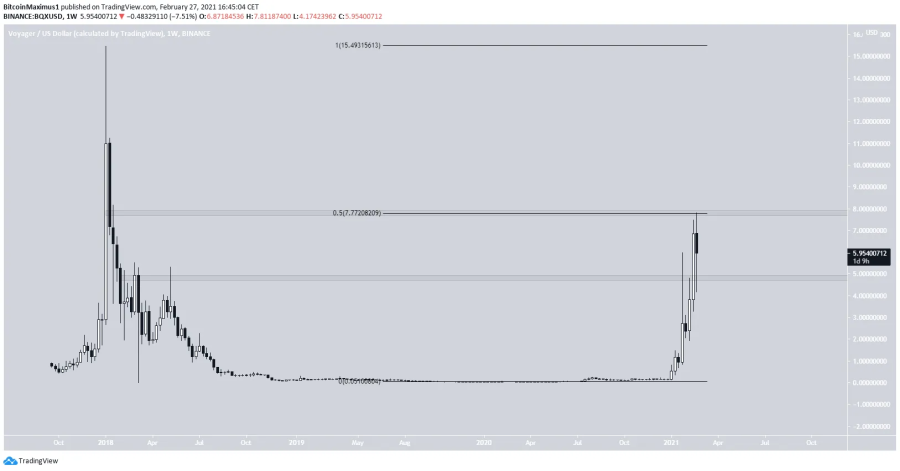 XVS is a DeFI platform which is based on the Binance Smart Chain. It allows for borrowing and lending through minting stablecoins.

XVS has had a very interesting month news-wise, which began with the publishing of its 2021 roadmap. It continued with the distribution  of gas reward fees for its first 5000 users. Last, but certainly not least, there was the listing on Digifinex on Feb. 25,

Despite last month’s increase, XVS is still ranked only #99 based on its market capitalization. Furthermore, it has been falling since  an all-time high price of $102 was reached on Feb. 19.

Despite the drop, XVS is currently trading inside a strong support area, created by the 0.5-0.618 Fib retracement levels found between $41 – $53. 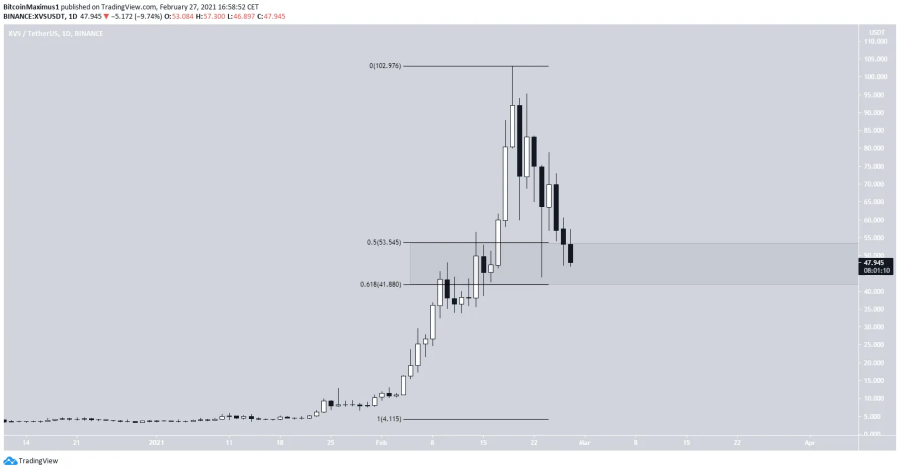 BNB is the second exchange token on the list. It is the native token for the Binance exchange. It is used to fuel the operations on the exchange, and provides users with different discount plans based on their BNB holdings and trading volume. BNB can also be used to invest in ICOs through the Binance Launchpad program.

From this list, BNB is the largest coin based on its market capitalization. It is ranked all the way at #5.

Price movement started with a massive increase at the beginning of the month, which could have been aided by the 14th BNB burn. However, the price has been falling since Feb. 19, when an all-time high of $348 was reached.

While the drop has been significant, measuring 36% until now, BNB has bounced at the 0.5 Fib retracement level and created a long lower wick, which is a sign of buying pressure. 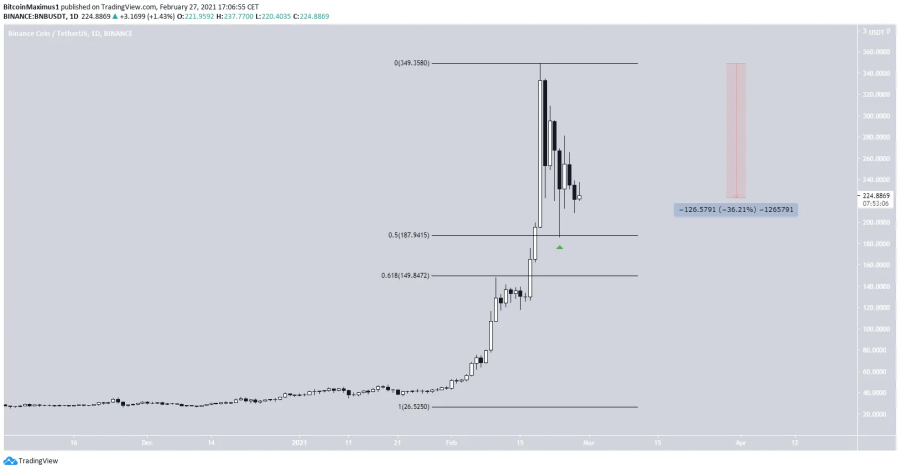 Pundi X is a project that aims to make spending cryptocurrencies easy. It plans to do that by distributing Point-Of-Sale devices to retailers, which then could accept payments in the form of NPXS, the native token.

February has been an interesting month for Pundi X, since a proposal to reduce the total supply was made on Feb. 10. Also, the team upgraded the system on Feb. 18.

Nevertheless, NPXS is still nowhere close to its all-time high price of $0.015, and is still ranked #90 based on its market cap.

However, NPXS is approaching the 0.5 Fib retracement support level, which could initiate some type of bounce. 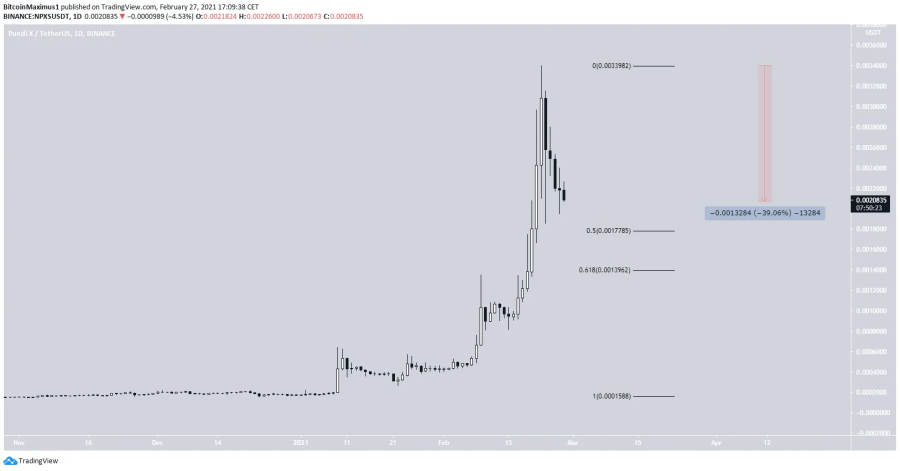 What altcoins do you think will be the top gainers in the month of March? Are any of the above your favs?