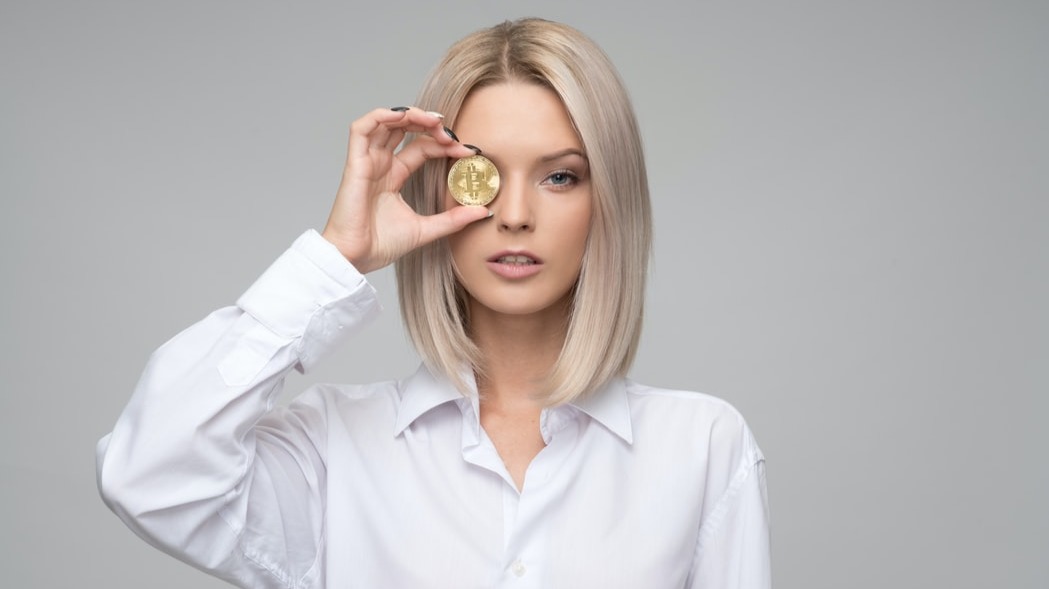 Bitcoin Manages to Hold Above $10,000, But Is the Correction Complete? (TA - 7th September)

It has reached a major long-term horizontal and Fibonacci support level, which may be enough to initiate a reversal.

The price has fallen back to the $10,100 support area, which had previously been acting as a resistance between September 2019 and July 2020. The level is also very close to the long-term descending resistance line that the price had broken out from this past July.

Technical indicators are leaning towards being bearish. The MACD has given a bearish reversal signal, and the stochastic RSI is in the process of generating a bearish cross.

However, the cross could be rejected if the price creates a bullish candlestick this week. In addition, the RSI is still trending above 50.

Therefore, the bearishness from weekly time-frame indicators is not sufficient to confirm that the trend is downward, especially since the price is trading above long-term support. 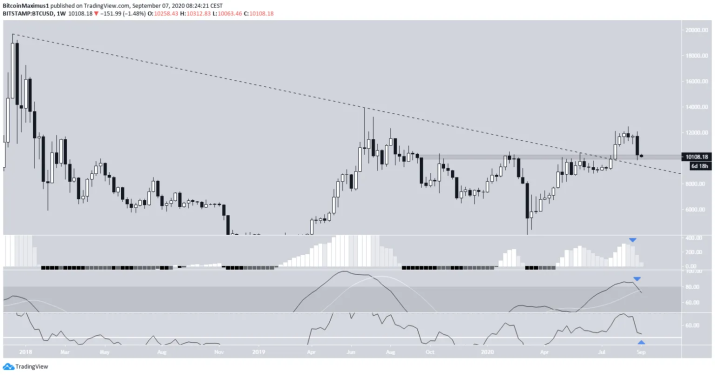 The daily chart shows that the price has created several long lower-wicks inside this aforementioned support area, a sign of buying pressure.

The MACD, RSI, and Stochastic RSI have recorded their lowest values since the March crash. However, there is no bullish divergence nor bullish reversal signal in any of them. 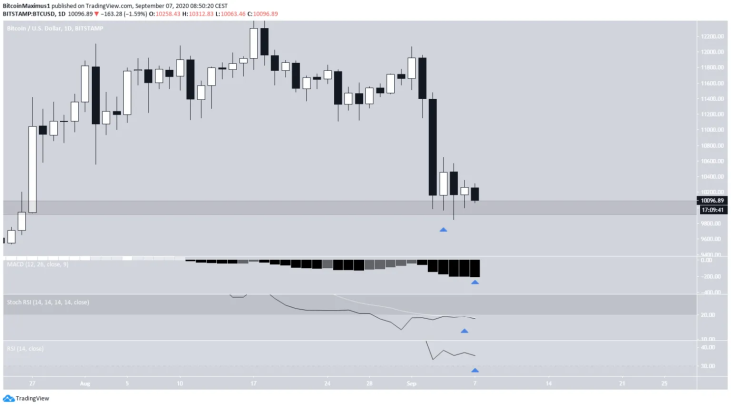 In the six-hour chart, there is a confirmed double-bottom pattern, which is normally a bullish reversal sign. In addition, both the MACD and RSI have generated some bullish divergence, and the stochastic RSI has made a bullish cross.

While this is a sign that the price will likely move upwards in the short-term, it is not yet certain if this will be just a relief rally or the beginning of a new upward move. 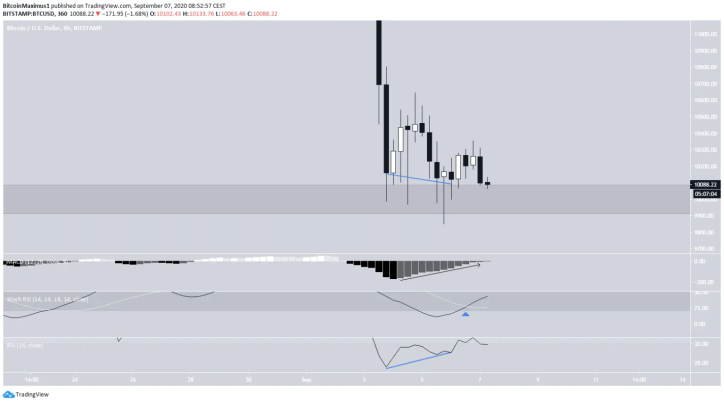 In addition, the $9,825 bottom was reached at exactly twice the time it took to complete wave 3. While this is unusual, it is a complex correction, so the pattern remains a valid possibility.

A decrease below the $9,450 high of wave 1 would invalidate this formation. 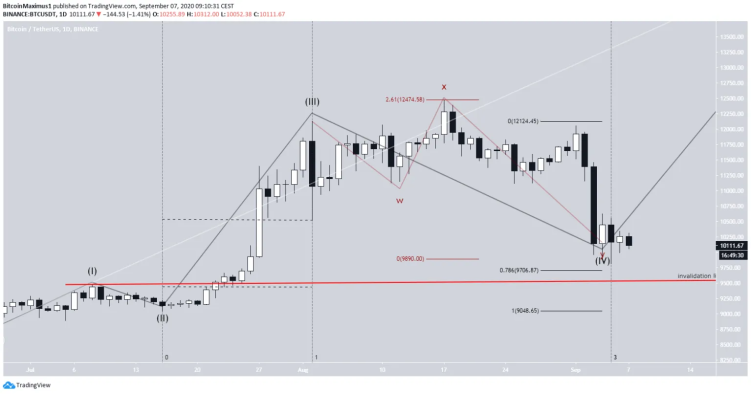 The wave is transpiring inside an A-B-C formation (shown in blue below). The 1.61 Fib level of sub-wave A projected to the top of wave B gives us a target of $9,885 for the bottom of C. This falls very close to the actual bottom of $9,825.

A similar target is found by using the 0.382 Fib of the extended 1-3 minor sub-waves (orange). 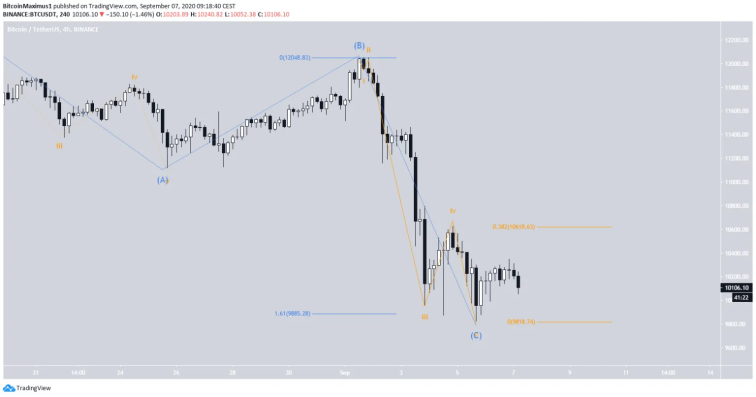 If the correction is complete, then the price has already begun a bullish impulsive move, by completing a leading diagonal as wave 1.

A decrease below the $9,825 bottom would invalidate this particular wave count. 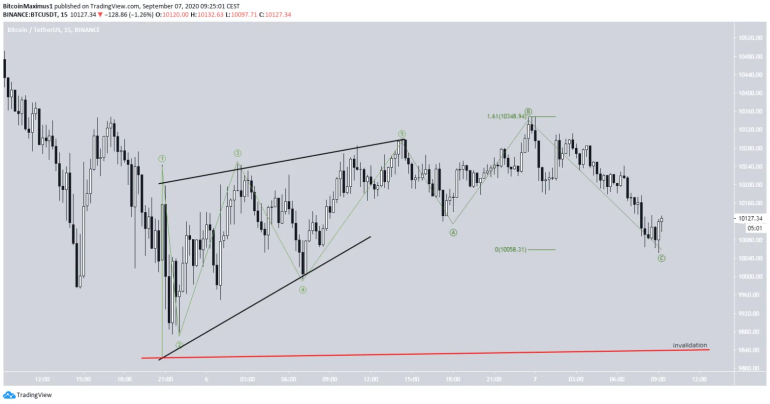 The alternative wave count would suggest that the price is still in wave 4, with another wave down to go. If this is correct, the price would likely retrace towards $10,650, before breaking down and reaching new local lows.

However, this would not fit with the 1.61 Fib target and the new wave would have to be quite small since a decrease below $9,450 would invalidate the bullish wave count. 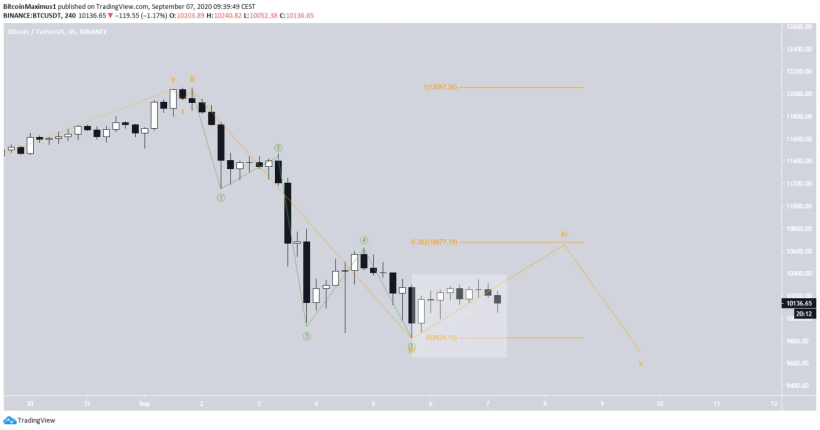 To conclude, the Bitcoin price looks to have already completed its correction or is very close to doing so. A decrease below $9,450 would invalidate this particular scenario.

Also, If you are interested in trading, I would suggest you try out BeInCrypto's free Telegram chat. I am there and it is growing very quickly (over 6,900 members) where they discuss the market and share interesting content. They also have a free premium channel where they have a cryptocurrency trading course and daily trading signals. If you are interested, you can click here.