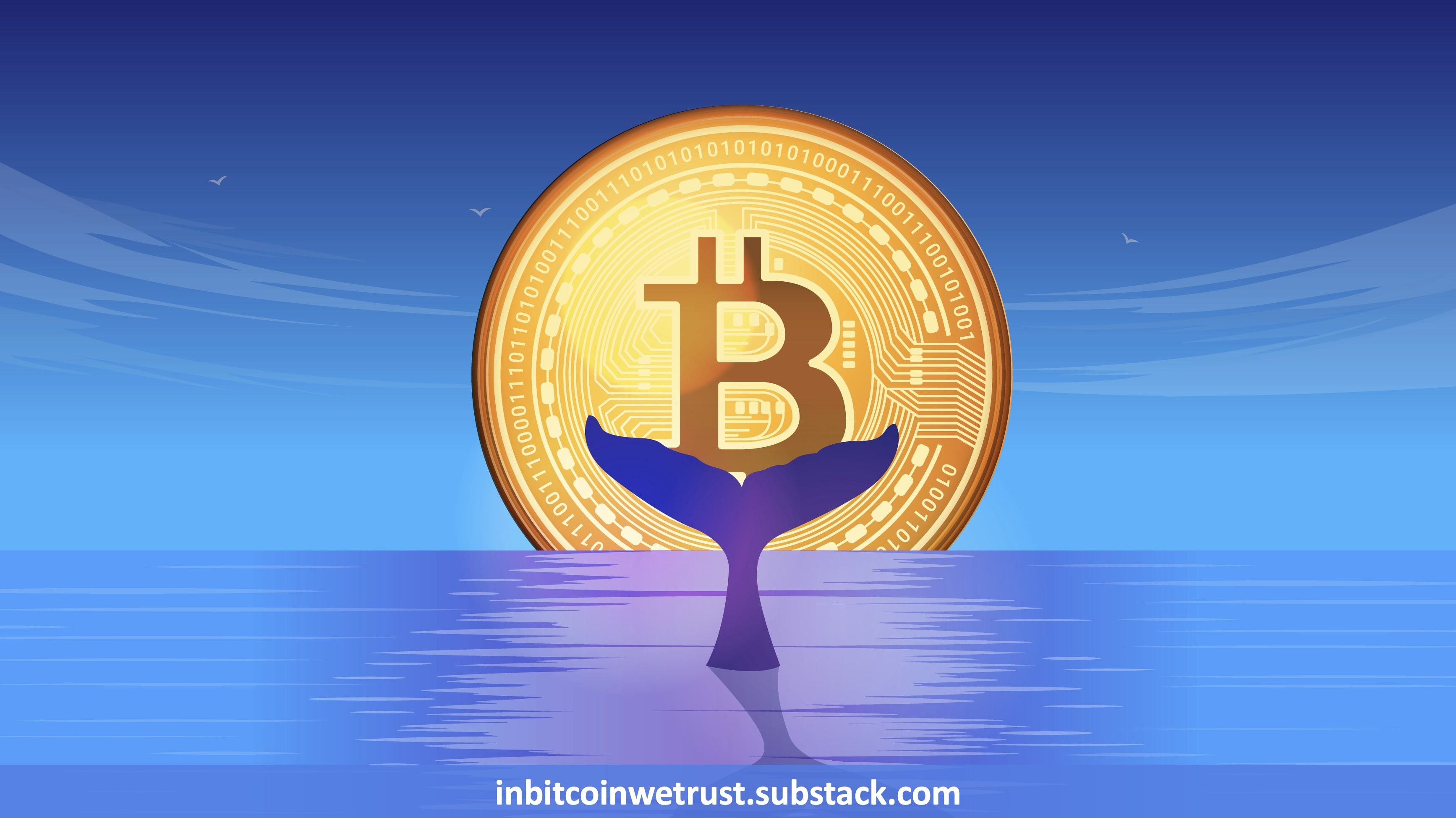 Mr. Whale Accuses Michael J. Saylor of Selling His Bitcoin in Secret – A Few Things for You To Judge Who the Liar Is Here.

In recent days, an article by the mysterious Mr. Whale has caused quite a stir in the Bitcoin world. Published on Medium, the article claims that Michael J. Saylor is secretly selling his Bitcoin. The title gives you an idea of the content of this article:

“Michael Saylor is Secretly Selling His Bitcoin and Doesn’t Want You To Know.”

Generally, I don't waste time commenting on FUD. However, some of you have contacted me directly by email. So I thought it would be interesting to write an article to share my position on the subject.

The first thing I think is important to say is that I cannot guarantee 100% at any given time that Michael J. Saylor has not sold his Bitcoin. No one can. And certainly not this mysterious Mr. Whale, who seems to have been well known in the cryptocurrency world as a scammer for several years.

He has changed his name several times, but each time his ambitions seem to be the same. I'll come back to that later.

So Mr. Whale assumes that he has discovered some of the addresses used by Michael J. Saylor to conceal Bitcoin sales. He says that to avoid having to notify the SEC, Michael J. Saylor had been moving Bitcoin into a mysterious LLC. Is this LLC as mysterious as Mr. Whale's identity? Mr. Whale doesn't answer that, of course.

In my opinion, Mr. Whale has no proof of what he is saying. He has no way of knowing what addresses MicroStrategy uses to store his BTC. These are just assumptions that he uses to support his narrative. Mr. Whale also says that Michael J. Saylor called to buy Bitcoin when he was at his peak in November 2021, to make money off of his millions of followers. That’s true. Michael J. Saylor dit that.

Michael J. Saylor has been attacked by Mr. Whale for months on the theme that he is a big loser of the DotCom bubble. Also, Mr. Whale shows pictures of Michael J. Saylor overweight to make fun of him. Is this a classy thing for Mr. Whale to do? I don't think so, because we can't know what health problems Michael J. Saylor may have had, but then again, when you hide behind a mysterious pseudonym, it's easy to do that.

Michael J. Saylor does not hide behind a pseudonym and continues to publicly support Bitcoin even though he has made mistakes in the past or has been a vocal opponent of Bitcoin. He has acknowledged several times that he was initially wrong about Bitcoin before fully embracing the Bitcoin revolution in August 2020 when he realized his mistake.

Mr. Whale seems to think that you can't make mistakes in life. Again, it's easy to attack others when you hide behind a mysterious pseudonym.

You may decide to trust a stranger like Mr. Whale who hides his identity and claims to be a millionaire through his investments. This same Mr. Whale who claims to only want to help the greatest number of people to see the truth about Michael J. Saylor, but who has created a paid newsletter of course. Probably to help others.

I am not criticizing those who create paid versions of their newsletters, since I have done so myself. The difference is that I don't hide my identity, and more importantly, I never claimed to be a millionaire. I am not and I need to work for a living. Making my newsletter paid has allowed me to devote more time to writing more articles and helping more people since I write a lot of free articles too.

It's a win-win I think. I'm transparent with you on this.

This same Mr. Whale has several Twitter accounts that he uses to spread more and more FUD and try to instill fear in the Bitcoin world. Maybe the market will fall even further and the price of Bitcoin will go below $30K. Anything is possible with a free market like Bitcoin. Mr. Whale will tell everyone that he said so. Some will be amazed and think he can predict the future.

They will probably forget that he is calling this fall in the price of Bitcoins below $10K since the end of 2020...

In the meantime, the price of Bitcoin has had two ATHs above $60K. It is certainly easy to be right one day after so many times saying the same false thing. But Mr. Whale obviously won't tell you that. Do you still want to trust Mr. Whale over Michael J. Saylor?

You'll see that at the end of his articles on Medium, he posts an image he created to share his affiliate link on Medium, on which he highlights popular writers from Medium, completely unrelated to him. This is what he says to attract more people to pay for a Medium subscription by allowing him to earn a commission on their yearly subscription:

“Also, are you looking to become a member on Medium, support me, and read unlimited articles from me AND thousands of others on Medium? You can sign up using my special link, which will get you an amazing discount!”

Do you think this is the behavior of a contrarian millionaire investor as he claims to be?

I'm not a millionaire, but I doubt I would do this if I were a millionaire because of my investment genius. But after all, I'm not a genius. I'm just a guy who fundamentally believes in the Bitcoin revolution and writes to share his opinions. No more, no less.

Michael J. Saylor's response to this controversy seems excellent to me:

If MicroStrategy were to sell its Bitcoin, the SEC would be informed. Ignore this LLC story that Mr. Whale is putting forward to make noise and generate more money. The problem is that it works because Medium puts forward these types of controversial articles that generate a lot of clicks. However, should we accept that some liars say anything to generate more and more clicks and therefore money?

Do you still doubt what I just told you about Mr. Whale and think I am a blind Bitcoin Maximalist? It's still possible. After all, I could be wrong. But you should know that I was in fleeting contact with this Mr. Whale on Medium and Twitter in mid-2020 and mid-2021. He follows me on Twitter by the way:

At the time, he didn't publish this type of totally fake article and I had even offered to publish articles on the In Bitcoin We Trust Medium publication:

As you can see, I am transparent with you.

From the end of 2020, I was surprised to see that he started to publish this type of totally unfounded article like the one about Michael J. Saylor, but I didn't say anything, because I'm not interested in FUD of this type.

On Twitter, he contacted me via private message in May 2021 to ask me something amazing for a millionaire investor:

Do you think a millionaire would wonder if they could make more money on Medium by posting paid articles (via the Medium Partner Program) on publications?

Honestly, I doubt it. It made me doubt it even more, but I had since given up. What I just read about Michael J. Saylor made me want to bring this to light. I pulled it out today as a writer for In Bitcoin We Trust on Medium. I must admit that I had forgotten that he was still on the list of writers because I haven't had any contact with this guy for a long time, since I prefer substack as a platform to publish my articles now.

Once this article is published, I imagine that he will come out and say that this is all a campaign to hurt him and that he will question what I am writing about Bitcoin. Or maybe I'm so insignificant that he won't even know about it. That's not a concern for me. The important thing for me is simply to share my feelings on the subject to help as many people as possible to make their own opinion. Mine is done as you may have understood.

Maybe I'm wrong about Michael J. Saylor and Mr. Whale is right. After all, anything is possible in life. If this is the case, and this is ever proven, I will tell you in keeping with the Bitcoin motto: “Don't Trust, Verify”.

Please feel free to tell me in the comments what you think about this.