Mainstream Media Talks About the Bear Market – This Usually Precedes a Strong Reversal for Bitcoin
MyCryptoOutlook2022 BitYard Contest and Giveaway - $1,200 in ETH Prizes! >> JOIN FROM HERE << 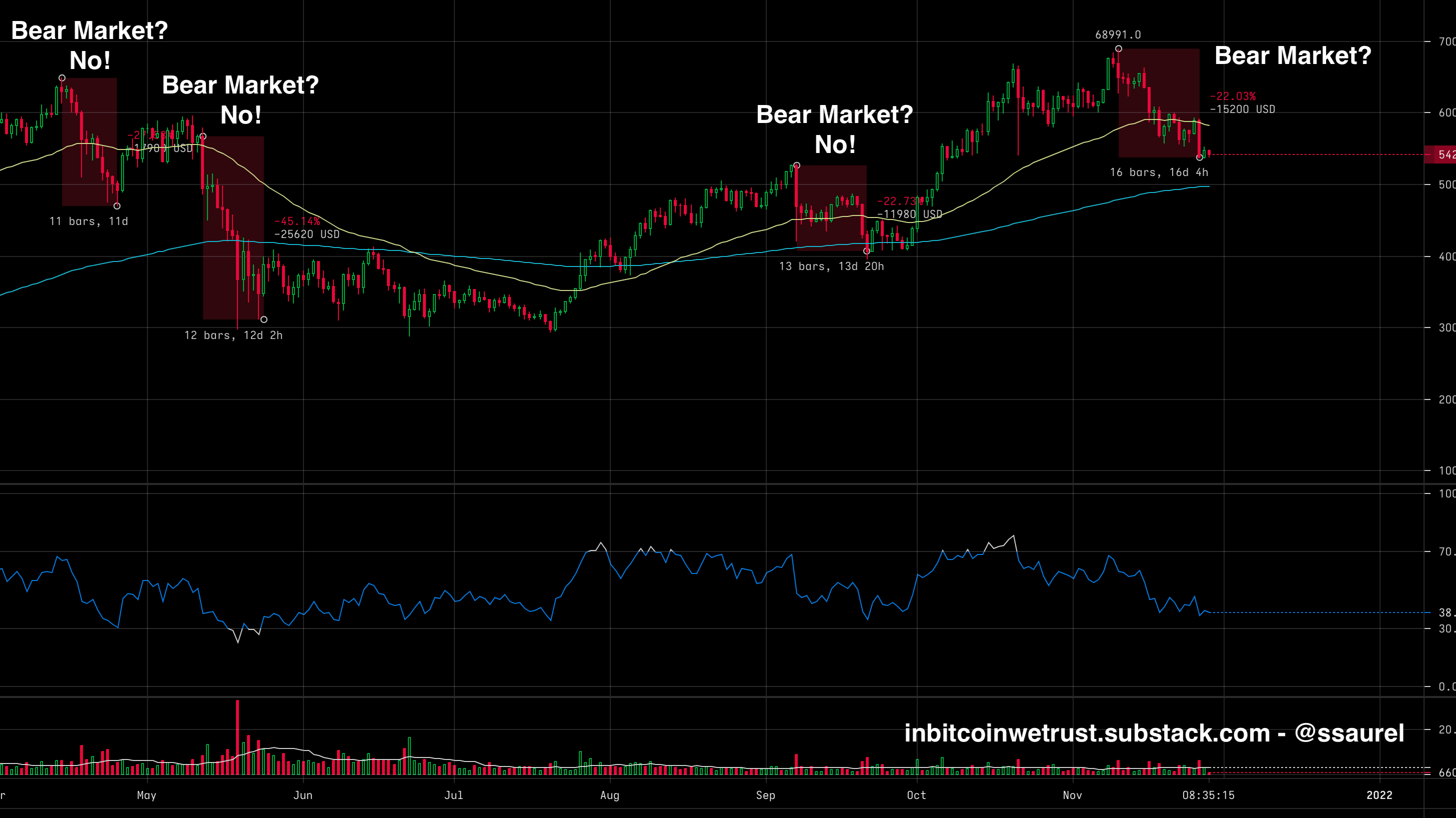 That was all it took for the mainstream media, like CNBC, to call it a Bear Market for Bitcoin:

They thus apply the strict definition of a Bear Market in the world of traditional finance: a 20% drop since the ATH. Applying college-level math, we have: $69K - 20% = $55.2K. Since the price of Bitcoin fell by -22.5% at the peak of its decline, we are in a Bear Market according to CNBC. Bloomberg also published articles with the same headlines.

These articles have played on investor sentiment and market sentiment has now reached an extreme fear on November 27, 2021:

This is of course reminiscent of the level of fear we had at the end of September 2021, before we had an extremely Bullish October 2021. This extreme fear is usually a sign of a market reversal and therefore an opportunity for those who have enough confidence in Bitcoin.

Many Whales have taken advantage of the price of around $55K to accumulate more BTC, and reserves on exchange platforms continue to move at 3-year lows. This is not a sign of a Bear Market in my eyes.

The mainstream media simply has trouble with the fact that Bitcoin's price volatility is part of the game, as it is the only truly free market in the world. They are simply not used to the volatility induced by the fact that trading is never interrupted in the Bitcoin market.

The announcement of the discovery of a new COVID variant, called Omicron, from South Africa triggered a sense of fear late last week that led to a sharp decline in all liquid markets. The equity market was no exception:

US 10-year Treasury bond rates fell sharply, as did the DXY. Panic was present at all levels. So there is no reason to panic about Bitcoin.

Remember this article from CNBC at the end of January 2021, which already announced a Bear Market for Bitcoin after it fell from $40K to $30K. However, the price of Bitcoin went much higher. If you want to get serious about Bitcoin, you need to be wary of the media's propensity for clickbait headlines that stir up fear among investors.

To help you with this, look at all the 20% or more drops in Bitcoin prices we've already seen this year:

Each time, the price of Bitcoin has risen again and again, before reaching this ATH on November 10, 2021. This will be the case again this time. The fundamentals are great, and that's what you need to focus on if you want to profit from the Bitcoin revolution.

If you do, you'll stop panicking and become one of the strong hands who profit from Bitcoin rather than the weak hands who constantly suffer and let their emotions rule them.

So the next few days are going to be very exciting to follow as always.