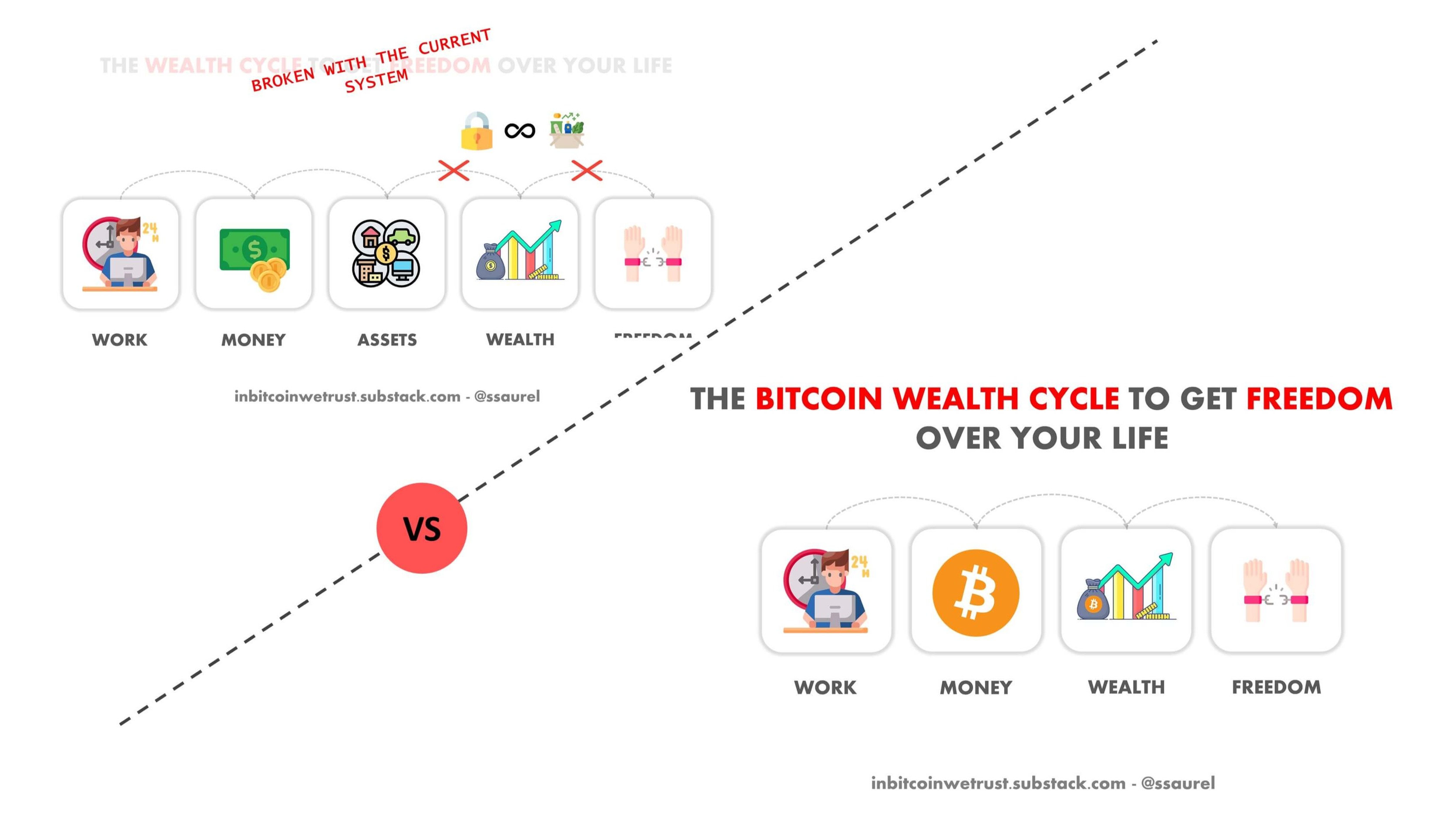 Have you ever heard of the wealth cycle?

Known to many people, the wealth cycle shows you how you can take full control of your life from your work and eventually gain the freedom to live your life on your own terms. Mind you, I didn't say it was an easy thing to do of course.

Nevertheless, this cycle highlighted by some has the merit of showing the way to go. Here is a very telling illustration:

Everything starts with you and your work. You will work hard day after day to earn money. Since the saying “Cash is Trash” is a reality, you will use this money to buy assets. These assets will be of different types: real estate, stocks, gold, ...

These assets should allow you to make the fruits of your labor work for you while you sleep. As Warren Buffett once said, this is the only way to avoid having to work for the rest of your life.

By making these assets work for you, you will build your wealth. Your wealth will ultimately allow you to achieve freedom. This is a word to be taken in the broadest sense here. You will be able to take control of your time and live your life on your own terms. This is the most essential freedom we must seek to conquer.

This cycle of wealth is more than relevant, but it has one major problem in today's monetary and financial system: it no longer works!

Here is the previous illustration showing how the flaws in the current system break this wealth cycle:

If your job allows you to earn money before investing it in assets, you will then be confronted with several major flaws of the current system. The first is the ability of central banks to print as much fiat money out of thin air as they need. As the US dollar continues to be debased, your purchasing power continues to fall as well.

The fruits of your labor cannot be safely saved. This debasement induces inflation which is a way of silently robbing the people. You cannot do anything about it, for it is the powerful people at the head of the current system who decide to act in this way in defiance of the great majority of the inhabitants of the Earth.

Some people find a way to protect themselves better than others when they can buy assets whose increase in value beats the effects of inflation. Unfortunately, only a minority of people can access these assets.

Finally, another major problem arises even for those who beat the effects of inflation. This is the confiscatory power of the powerful in the current system over your assets. Governments can decide to confiscate some of your assets for totally arbitrary reasons. They are your assets acquired with your honest work, but the rules of the governments apply.

De facto, you are no longer able to achieve the freedom to live your life on your own terms. You are stuck in an unjust system. A system that the powerful are not going to change because it is favorable to them.

Before Bitcoin was invented, you had no way to fix the wealth cycle. You had no choice but to accept the injustice of the current system and hope that it would only hit you as late as possible. Now that we're in year 13 since the creation of Bitcoin, things are different.

Bitcoin is a monetary and financial system that returns power to the people. Bitcoin's programmatic monetary policy is superior in every way to that pursued by the central banks of the major economies in the current system.

The rules of the game are known in advance with Bitcoin, and they will be applied no matter what. That's the magic of an algorithm: it is relentless and applies the laws of mathematics no matter what. The inflation of the supply of new Bitcoin will tend to zero by 2140 no matter what, on a timetable known to all in advance.

The following illustration shows you how the wealth cycle is fixed when Bitcoin becomes the currency used within it:

As you can see, there is nothing extraordinary about this updated version of the wealth cycle, except that weak money like the US dollar has been replaced by hard money like Bitcoin. This paradigm shift ultimately creates a major difference as it fixes the wealth cycle.

Because Bitcoin is the world's best savings technology, you no longer have to buy assets to protect the fruits of your labor. Bitcoin does that and brings you wealth directly. Real wealth because your Bitcoin cannot be taken away from you if you have the private keys to it. You then directly reach the essential freedom I mentioned at the beginning of this article: the freedom to live your life on your own terms.

The minimalist version of this wealth cycle with Bitcoin as the currency at the center of your system can be represented as follows:

As you can see, this is something that is accessible once you decide to opt for the Bitcoin system. The accessibility is even greater as all you need is the Internet and a smartphone to benefit from the Bitcoin system. As always, it's up to you to make the best decision for your future.