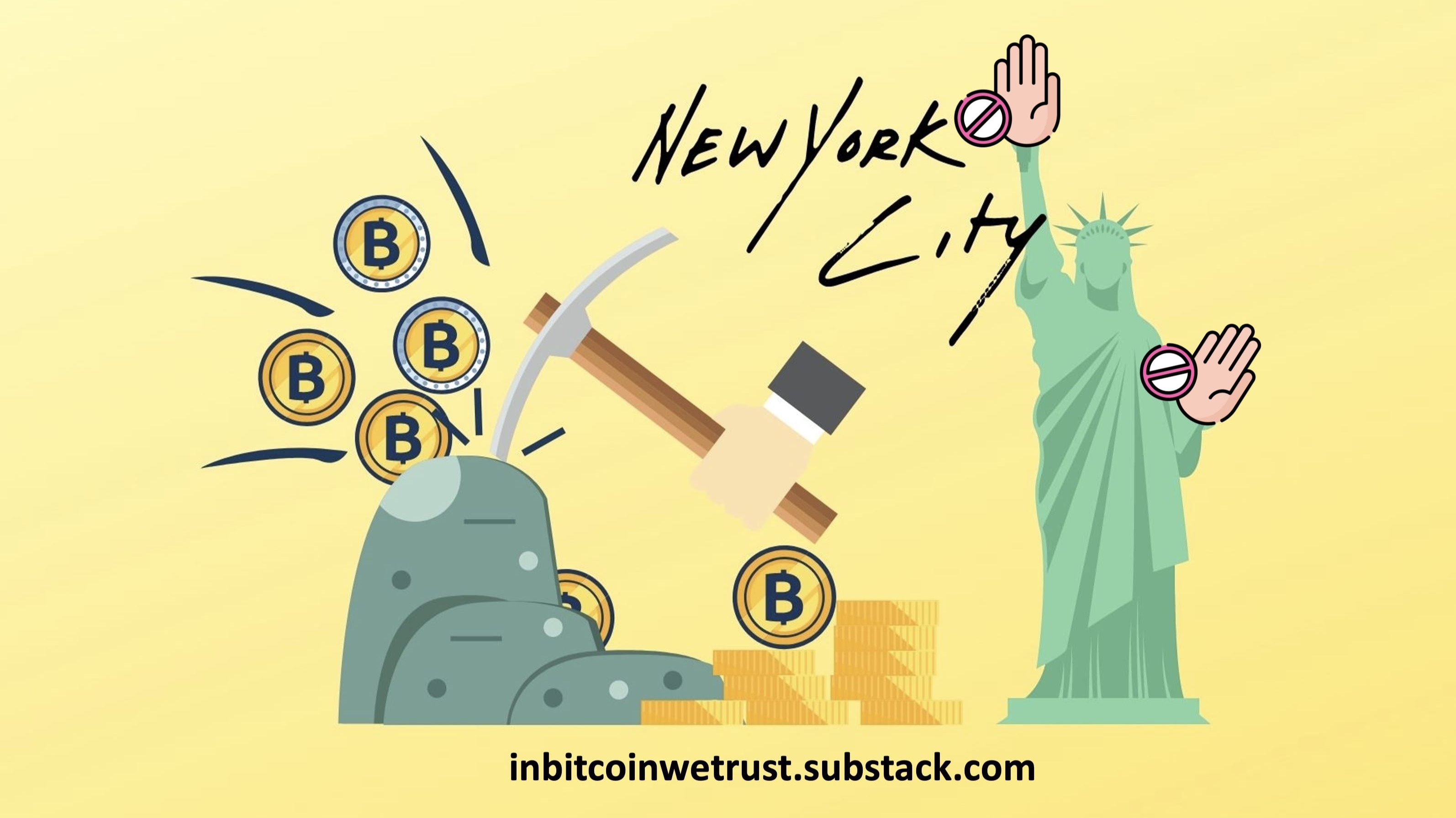 5 Reasons Why New York State’s Attack on Bitcoin Mining Is a Historic Mistake.

In May 2021, China banned Bitcoin mining in its territory. Given the lack of appeal to the values of freedom that Bitcoin stands for, this move by the CCP was hardly surprising. China is still a dictatorship, even if some people don't like that label.

To see the state of New York about to ban Bitcoin mining, however, is something more surprising. I would even say something confusing. America is a country that generally advocates the defense of individual freedoms above all else.

Yet a moratorium on Bitcoin's Proof of Work mining process is now on the desk of the New York State Governor to be signed into law. Once that happens, New York will be the first state in the U.S. to attack the Bitcoin system head-on.

This decision is a historic mistake for at least 5 reasons, which I'd like to go over with you.

1. The topic of the negative environmental impact of Bitcoin mining is a lie

Yet the numbers don't lie, and we can see that Bitcoin mining is a boon to the energy transition by promoting investment in low-carbon infrastructure:

The Bitcoin Mining Council's numbers released every quarter show the incredible efforts made by this industry to green Bitcoin mining.

The Bitcoin Mining Council currently has 44 mining players representing half of the Bitcoin network's Hash Rate. These players are predominantly American and Canadian. At the end of Q1 2022, 58% of the energy used by these players was from renewable sources. No industry can say that:

So to want to ban Bitcoin mining for environmental reasons is a blatant lie.

2. Some overzealous politicians will shoot New York State in the foot economically

The decentralization of the Bitcoin network is a unique strength allowing miners to move their equipment easily and quickly around the world. As a result, Bitcoin mining industry players will soon be leaving the state of New York for more welcoming skies.

Texas, which is already a leading U.S. state in this field, will gladly welcome more players in the Bitcoin mining industry. Pragmatism will prevail. If not Texas, then Florida. And so on.

New York will shoot itself in the foot by scaring away players in a rapidly developing industry that will explode even more in the coming years. The other American states are not asking for so much, and this competition between American states will have a big winner: the security of the Bitcoin network, which will continue to grow in the years to come.

This will ultimately benefit Bitcoin users, who will see the fruits of their labor even better protected.

3. New York State to set precedent by banning an algorithm

Do you know what's at the heart of the Bitcoin mining process? It's an algorithm: the Proof-of-Work (PoW) algorithm. PoW is what gives Bitcoin its superiority by allowing decentralization of its network in search of a consensus for the validation of transactions made on the network.

Do you realize that New York wants to create a precedent by banning an algorithm? It is quite incredible to imagine that a country where freedom is supposed to be king wants to ban a simple algorithm. And then you hear these same politicians criticize the censorship that the CCP is doing on the Chinese ...

Banning Bitcoin mining would simply be doing the same thing. What a poor example sent to the world!

4. This ban on Bitcoin mining in New York State will not change anything as the Chinese precedent shows

Remember the panic that gripped the Bitcoin market when China banned Bitcoin mining from its territory: many feared the end of Bitcoin. The most optimistic thought was that Bitcoin would take years to recover. And then, just a few months later, Bitcoin saw its network more secure than ever with a new ATH for the Network Hash Rate.

The reality is that this type of ban is ineffective on a decentralized network like Bitcoin. Miners are simply putting their equipment at risk while they move it to more friendly jurisdictions before reconnecting to the network.

Moving them to other U.S. states will be even easier than moving them from China to the West, as in the great exodus we witnessed last year.

5. This ban is unconstitutional

When you buy Bitcoin and take private keys associated with your Bitcoin, you gain full ownership of a piece of the Bitcoin Blockchain. True ownership because you won't have to pay any taxes on it. Your Bitcoin is yours forever. Bitcoin is the ultimate in terms of private property.

By banning Bitcoin mining, New York State is undermining the security of the Bitcoin network, which is the very thing that guarantees the private property of Americans living in the state. This is an unconstitutional act. Moreover, Bitcoin, which is only a computer source code, can be considered free speech.

Attacking Bitcoin is like attacking the First Amendment. There is no doubt that the courts will be able to settle these cases, which undermine the rights of American citizens, because of a few politicians who want to legislate on subjects they do not understand.

Tackling Bitcoin mining is proof of the lack of courage of politicians. Instead of tackling the real energy issues, they prefer to tackle a buzzworthy topic to make themselves look good to the general public who still don't understand the issues here.

The real energy issues are elsewhere, but you can be sure that politicians will never attack them because that would require courage they don't have.

As far as Bitcoin is concerned, it won't make any difference, because the network has already shown its resilience to this kind of attack.