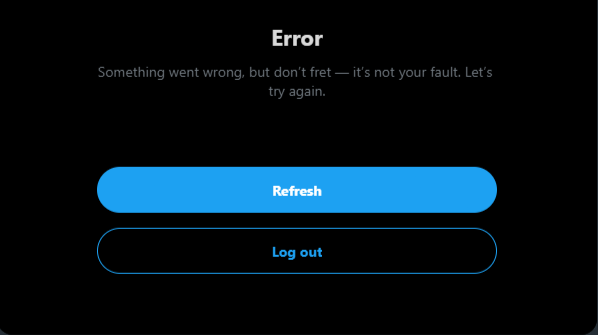 As much as I'd like to have that long awaited microblogging app from Leofinance at hand to be able to live this current bull market online, as it consumes itself, looks like it's still a dream, one that many have already probably forgotten.

Twitter is still an option to keep in touch with the crypto world and the crypto twitter is quite active as a community on the social media platform, and quite an influential one. Earlier today I had problems accessing my account on twitter.

I thought I've been hacked or something, but who would hack me... I rarely get a like on my posts on twitter so that couldn't be true. After it all got to back to normal and was able to enter the virtual world I saw a tweet about this situation, a quite interesting one. Looks like the same time twitter was down, crypto was also down.

Well, not down like the social media app as blockchains never go down, but charts don't lie and most of the market has lost in valuation during that specific time frame. Now twitter is once again down and we once again have a small dump. One could say that it's just a breather after the recent rallies, but too much coincidence I'd say.

It makes sense though. This shitty social media app has had the power to take down Donald Trump and send him to oblivion so why wouldn't it influence crypto prices. After all, most of the ones involved in these markets are active users of the app.

There are folks with legacies of followers that can pump and dump coins and even one man, such as Elon Musk can take a shitcoin to Mars, or bring it back to earth. The world of events is no longer TV and traditional media dependent and when you have a whole digital world on the rise that's somehow kept connected through a social media app...

Once that app is no longer working properly, that world is going to get shaken. The crypto world acts as a community as well and this community has created most of its play grounds on twitter thus the correlation between its out of service time and the crypto cooling effect.

As I am writing this post I still can't access my twitter account and and the whole ctypto market has lost nearly ten billion in total market valuation in just a few minutes. To some extent the centralized power of social media is still quite influential over this type of assets.

The crypto markets are still quite immature and looks like some are FUDing at the snap of a finger, or the push of a paus button for twitter's servers. The sentiment is often times fueled by influencers and the whole space is somehow dependent on the connectiveness between its participants that for the moment is provided by twitter.

Long live twitter, but please Khal, give us project blank. You won't regret, I promise... What do you think, is the crypto market's performance of today related in anyhow to the twitter outages?