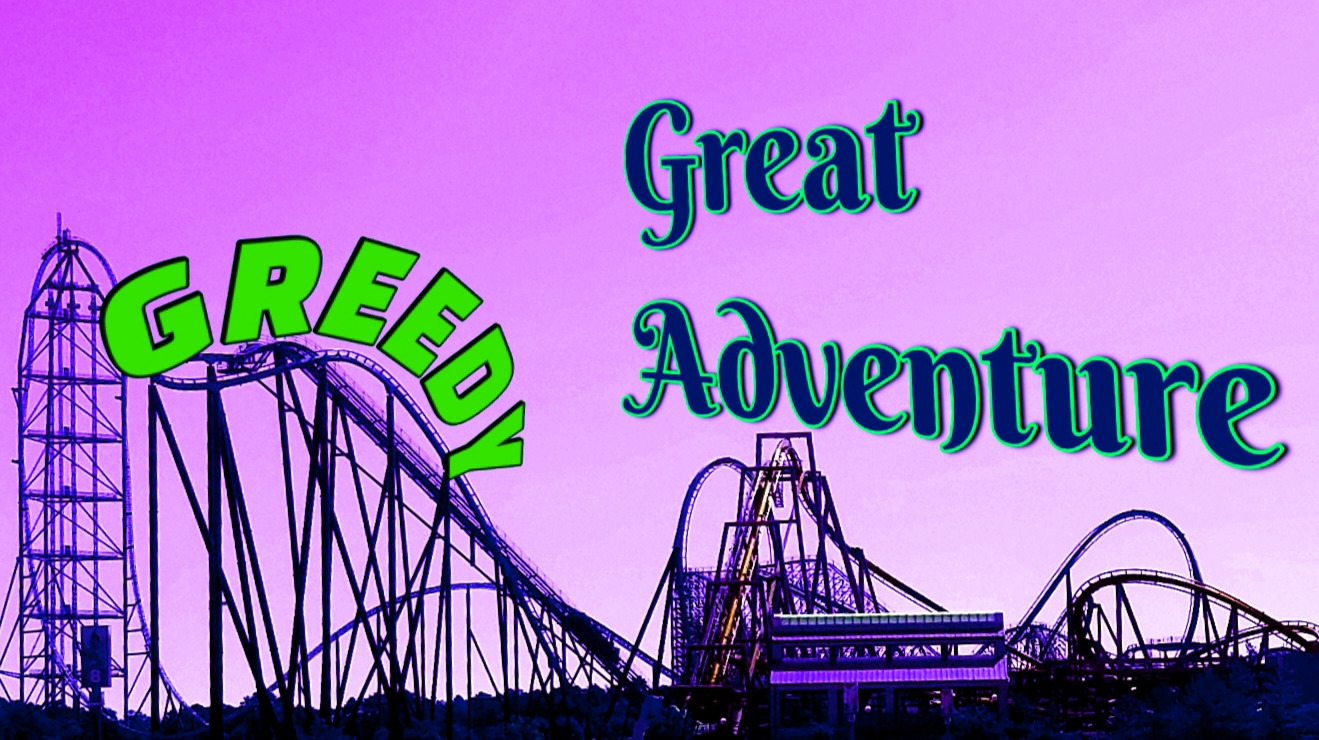 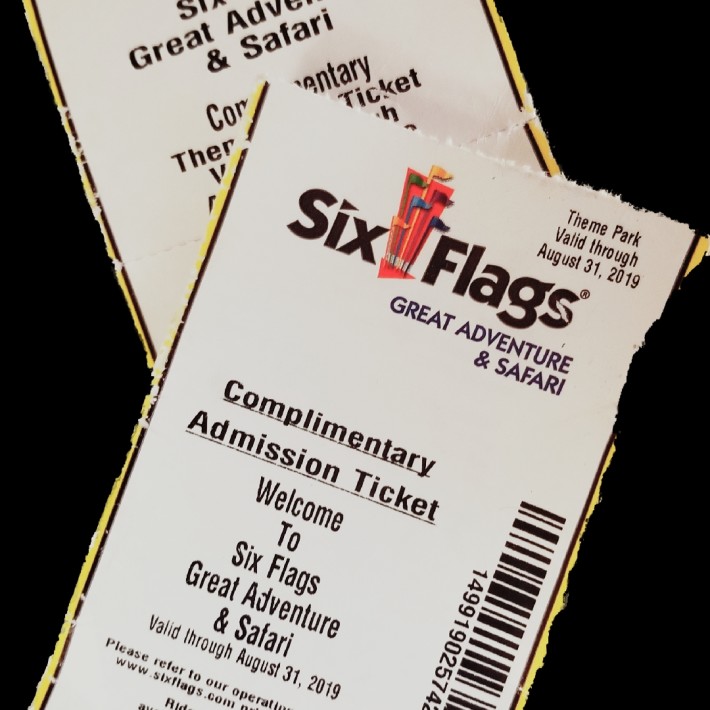 Went to Great Adventure a few days ago. I had a really good time, my ticket was free, so immediately my opinion is biased. The roller coasters are pretty badass. The only unfortunate thing I came across was the astronomical costs of simple food items, drinks, parking, lockers for your belongings and souvenirs. While Great Adventure is the epitome of corporate and capitalist greed in America, one cannot complain too much simply because it is a luxury item. They are not the utility company nor the local grocer. They are a business offering a luxury or discretionary item and can charge whatever they want. I'm actually a little jealous of their business model. They shove a metaphorical shotgun into the consumers face as soon as one pulls into the park. But one must think even evil corporate overlords have their limits somewhere. 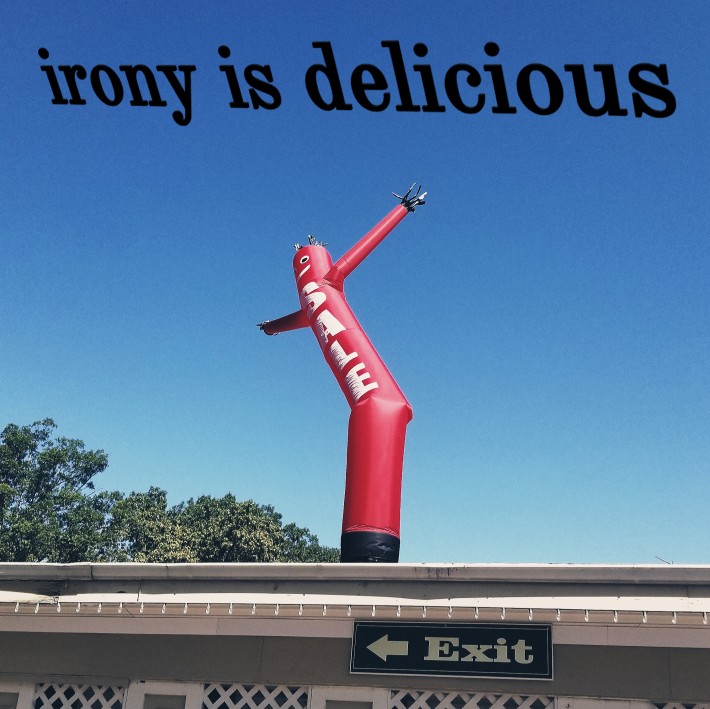 Let me be fair here, as I said, I had an excellent time. It just absolutely disgusted me seeing the prices. Honestly it almost soured my good time, the ridiculous price tags all over the park, almost mocking me. Not really, I'm not that much of a lunatic. However, I walked up to a vending machine to get a bottle of water, and when I saw the price of $6, I almost recoiled in horror like some creature from another dimension was ripping through the void to eat my face off. Then, as I slowly backed away from the machine as if it had just raped me behind a dumpster, a kid passes me, walks right up to the machine puts a credit card in, and grabs three bottles of water. Dude just spent eighteen bucks on three bottles of water like it was nothing. And there's your answer right there. That's why prices are so high in the world. Because people like that kid, don't give a shit. That little douchebag sets the market for us all. And, people like that probably aren't even paying for it themselves. 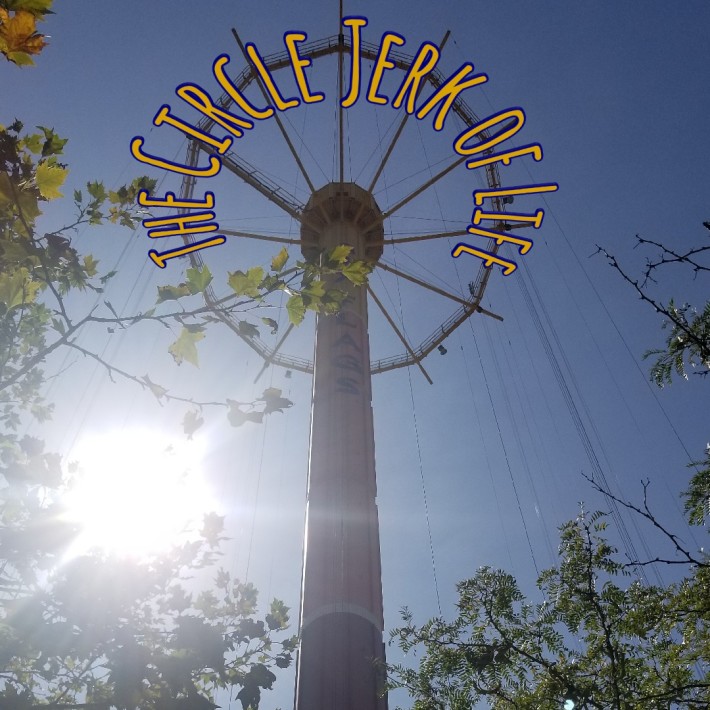 But again being completely fair, Great Adventure is not to blame here. You are. And so am I. And so is everyone else on this planet. We are the consumers. We allowed this to happen. And do you want to know why? Because the consumers of today are weak mined. Here's an example of how I know. This is the welcome mat that Bugs Bunny and the corporate shills of the Great Adventure Machine lay out for you when you first pull into the park: 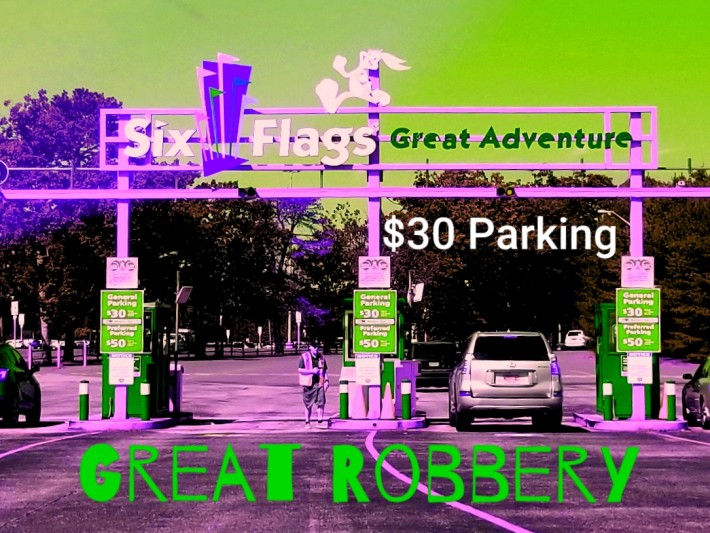 These people are literally printing their own money. $30 for parking in addition to the ticket you already paid however much for. And what are you going to do? I'll tell you what. Nothing. You're going to pay it and drive right through like I did. What is the alternative? Tell your wife and your family that you're not paying the $30 for parking after you drove an hour to get there and packed up your whole goddamn car with a bunch of shit? You get home and the neighbor is like, "hey how was Great Adventure?" And the kids are still crying in the backseat of the car because we didn't go in... because daddy, the asshole, didn't want to pay 30 bucks for parking? Nope. You're going to pay it, you're going to park, and you're going to walk a mile and a half to the actual entrance of the park, that is now set up like airport security literally, no joke. Metal detectors and full bag searches, pocket searches. All while you're surrounded by an electrified fence with signs that say "No Food and No Drinks", and "Danger - High Voltage". That is no joke either. Our brilliant corporate overlords have decided that electrified fencing is now an acceptable deterrent to keep unwanted food and beverage items out of the park. 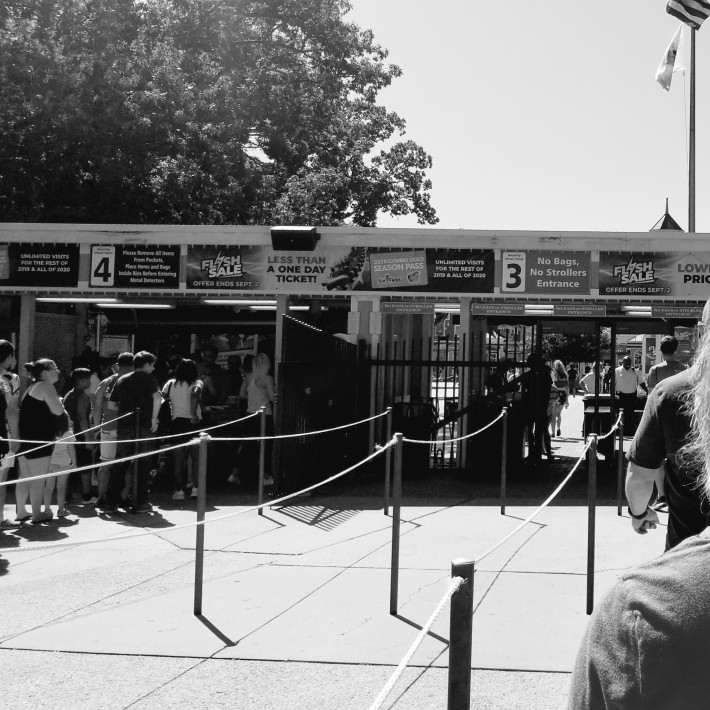 ...And as we fell into our dystopian society, we realized we had built our own proverbial tombstones.

Okay then... So, now that my rant about greedy corporate America is over, here are some of the rides I went on: 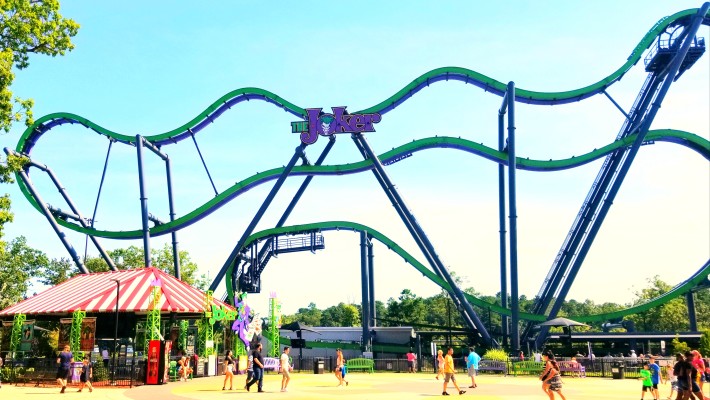 Never have I expressed as many expletives in front of a 13 year old girl. 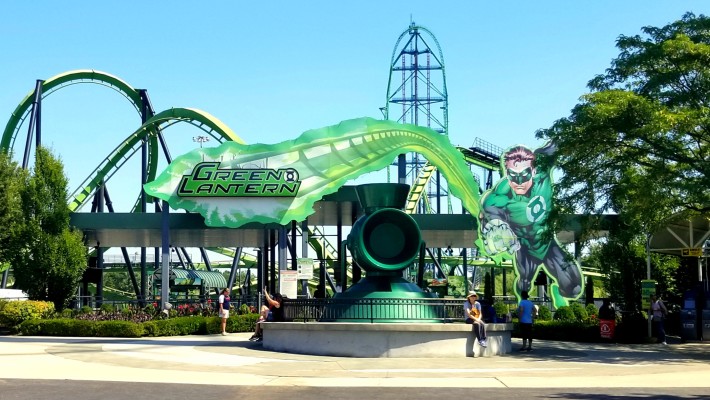 Only in America can someone say, "Hey, I've got an idea... let's build a roller coaster that goes 90 miles an hour, has several loops and twists and sharp turns, but instead of people sitting down, have them stand up, and make them pay us to go on it", and then actually have a multibillion-dollar corporation build and stand behind those statements with millions of dollars worth of insurance policies. 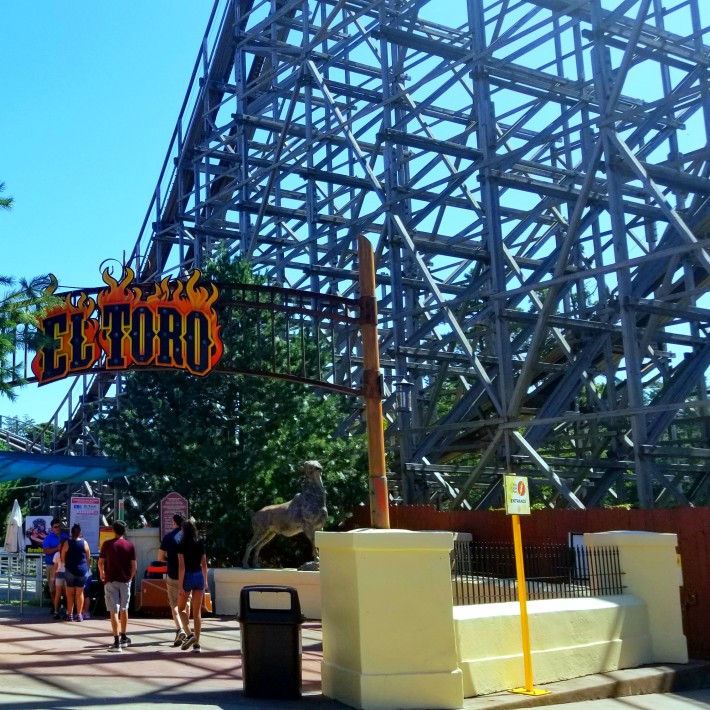 Now featuring a safety bar that gave me a feeling of comfort that would rival that of a toddler's car seat while going 200 miles an hour in a vehicle with no roof or doors on the Bonneville Salt Flats.

This is a great ride because you are fastened in the car in the position of flying...literally flying through the track like Superman.

I was not going to mention this, but I will anyway, because it's inappropriate and hilarious, and that's right up my alley. On this particular occasion my experience on this ride was ruined. Not only did they have some drunk psycho at the helm who didn't know how to put the track back together after what seemed like a routine maintenance check, we then proceeded to wait about a half an hour at the main entry point of the ride, after we already waited about 45 minutes already to get that far. Then, to top it all off there was this kid in front of us who, for lack of a better phrase, smelled like absolute dogshit.

I was begged not to, and I wasn't going to follow through with it but I did anyway... I told him. I mean no one else was going to do it and I'm never going to see this kid again. He was maybe 15 or 16, obviously his parents did not give him the proper tools to bathe correctly or teach him to about anatomy or sweat glands or to put on some fucking deodorant if you're going to be at Great Adventure adventure for 6 hours in 100 degree weather.

So right as he was ready to get on the ride, I said hey kid, listen to me. You smell like something that died in the back of a car and was sitting in the heat for 3 hours. Bathe properly before you go out in public, or at the very least, carry some speed stick with you son. I'm telling you this because no one else will and I'm telling you quietly so you're not embarrassed... Take a bath dude, you stink.

Of course everyone in my party was appalled by this. You know what though, that kid will thank me for doing that for him when he's marrying someone like the the Old Spice heiress or some gorgeous Dove soap model. 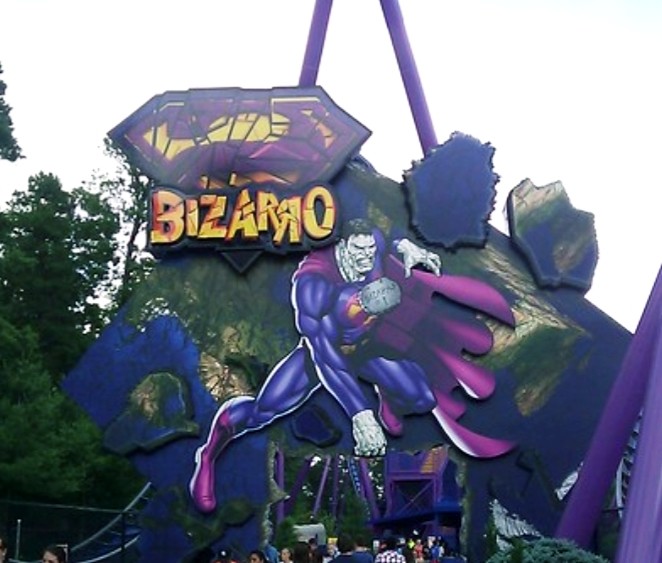 This is by far my favorite ride in the park. Literally go through a mist machine at 80 miles an hour and fire propels up at you through some beastly looking flamethrower machine they positioned underneath the roller coaster. Seriously it singed my leg hair through the one loop. It was actually very exciting. I was very close to buying the photograph that's taken of you at the pinnacle point of the coaster except they cost $35 and I thought that was a fucking joke. So my friend took a picture of it with his cell phone, and that ended up not coming out properly anyway. Saving that one for my memory bank.

Because publish0x only allows three blog categories, this category will be used for a menagerie of topics. 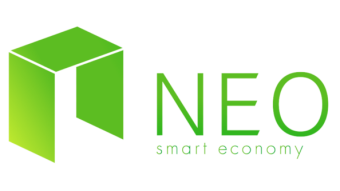 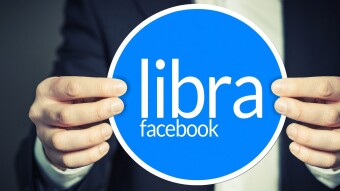 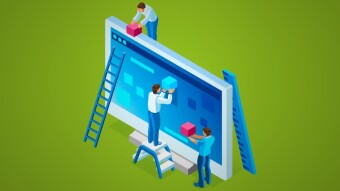