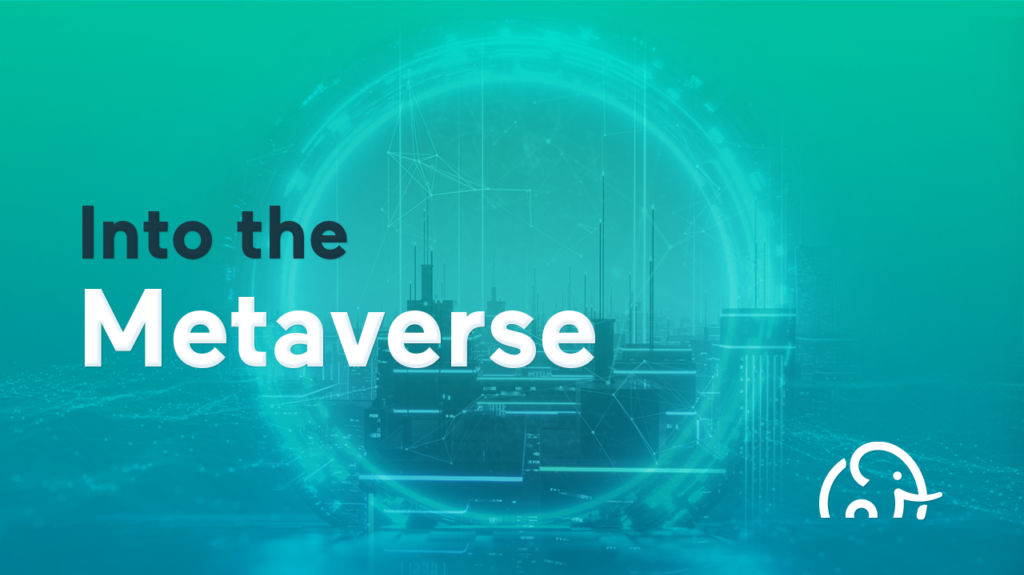 Metaverse is a highly engaging topic in the IT, crypto, and business communities, representing a concept where a significant part of social and business matters will be conducted in the future. The term “Meta” comes from Greek. It translates to “after” or “beyond” and usually describes a subject in a way that transcends its original limits, while the term “universe” represents everything that exists. Metaverse is in fact an idea of an ecosystem transcending the limits of our physical universe. We can imagine the metaverse as physical experiences inside a virtual digital world.

The term “metaverse” was first coined almost 30 years ago by Neal Stephenson in his science-fiction novel “Snow Crash” (1992) in which people are trying to escape their dystopian reality by using digital avatars to explore the online world.

The idea of a metaverse has been portrayed in several movies and TV shows, like Matrix, Ready Player One, and Black Mirror to name a few; certain online games, e.g., Second Life and Minecraft, have also integrated several metaverse characteristics and can be seen as metaverse pioneers.

However, the progress in blockchain technology and Web 3.0 development are opening the door to an unprecedented field of possibilities. The evolution of IT technology is heading in a direction that offers an increasingly real-life experience. At the beginning of the Internet, all we had to work with was text and a couple of hyperlinks, then came the visuals and mobile computing that added a lot of rich content to the web. Further, the higher internet speeds enabled massive video sharing. Now, virtual, and augmented reality have created the foundation for more real-life 3D platforms with higher engagement and a truly immersive feel. Given this timeline, it is understandable that a metaverse iteration is the next step.

How could Metaverse enrich our lives?

While the metaverse term has been around for decades, the concept gained most of its momentum during the COVID-19 pandemic. The safety restrictions and lockdowns hugely affected our social and business life redirecting all of it to a few digital platforms. Popular social media networks became the meeting point for socializing, while business was mostly conducted through Zoom meeting rooms and other virtual spaces.

Even though we should cherish these digital platforms that gave us an alternative during the pandemic, their 2D virtual representation still left us with a certain feeling of loneliness and social isolation. Upgrade these venues to the metaverse concept and we get this notion of a virtual 3D meeting space where people can participate in real-time, profoundly immersed with complete sensory stimulation… Once you exit it, the space itself does not simply disappear as Zoom meetings did but remains continuously active.

Metaverses will become platforms, where people will be able to virtually connect, communicate, and network from anywhere in the world without leaving the comfort of their homes. Commuting to work or flying around the world for a business meeting could become obsolete. These platforms will open an entirely new field of digital economy with an infinite number of possibilities, innovative business models, and consequently new job opportunities. What is more, they will help users gain a true sense of presence in the virtual realm.

Some have already joined the party

Some of the biggest names in IT are investing large numbers in the development of their own metaverses, while the smaller players are at least trying to secure land and virtual assets ownership inside one of these metaverses.

Facebook made a big move by rebranding its corporation to Meta Platforms. It bought Oculus and started building its own VR goggles, controllers, and a metaverse social platform called Horizon Worlds. Microsoft followed with its own metaverse plans, which included acquiring Activision Blizzard, known for its games like Candy Crush and Call of Duty. Other technology giants have also joined the race to the metaverse – Alphabet (Google), Apple, Nvidia, Roblox, Tencent, Adobe Systems, and Snap – which already uses augmented reality for its social media platform. Most of them are developing their own VR hardware and are competing to deliver the most compelling ecosystem of the virtual universe.

Who will be running the show?

However, if Web 3.0 developers have anything to say, none of these giants will keep their place at the metaverse table in the long run. The entire idea of Web 3.0 is based on decentralization, where the use of the internet and thus metaverse will no longer be censored and controlled by a handful of corporations. Instead, users themselves will be able to participate and own parts of the web, which of course includes the metaverse. Numerous versions of decentralized metaverses already exist – Decentraland, The Sandbox, and Axie Infinity are a few of the best-known versions so far.

Metaverses can differ, based on their core functions. For example, Decentraland and The Sandbox offer users the ability to go shopping for favorite brands, attend events, play games, socialize with other people, and even build new businesses. Most of these services take the form of NFTs, one of the most lucrative business models in the metaverse so far. Fun fact, even the Vatican has announced a strategic partnership with tech company Sensorium to create an NFT gallery of the Vatican’s art collection. Another important metaverse business model is land ownership. Huge investment groups and individuals are putting in millions of dollars to buy metaverse plots that they could someday use as event venues, office space, rentals, etc., and charge their visitors usage fees. Sometimes investors buy land plots only to resell them to a higher bidder, but the bigger investors tend to buy them as speculation of future profits. In any case, users can build their metaverse worlds in whatever way they want, including creating their own settings, avatars, marketplaces, digital infrastructures, and applications. Each of these metaverses has its ERC-20 utility token (MANA in Decentraland and SAND in The Sandbox) which is integrated into the metaverse ecosystem, supporting all transactions and interactions. Anyone can build, own, and monetize their metaverse experience using the platform’s native cryptocurrency.

On the other hand, we have metaverses like Axie Infinity, which gives its users the chance to earn money while playing around with adorable animal-like characters. For some, Earn2Play games are becoming a way to make an actual living. In some countries, like the Philippines or Gana, where an average monthly wage is slightly over $100, people are earning up to $140 per month just by playing Axie Infinity. Many have decided to leave their traditional jobs because the alternative makes more sense. Keep in mind, these Earn2Play games are in their early stages of development. Their upgraded versions will surely overflood the entire world and cause similar revolutions in other countries as well.

Another metaverse worth mentioning is Bloktopia. Built and backed by Polygon, Bloktopia is a Skyscraper made up of 21 levels to pay recognition to 21 million Bitcoin. Users will be able to earn revenue through real estate ownership, advertising revenue, gaming, building networks, and much more. Bloktopia metaverse is expected to be launched in the coming months.

When talking about the metaverse, people seem to be afraid of its effects on mental health. According to statistics, the primary problem associated with the metaverse is addiction, causing an alarming rate of anxiety and depression. The internet and social media are extremely addictive because every piece of engaging content sends a small dopamine hit in your brain. We are used to consuming information at an alarmingly fast pace, often multiple hours per day.

According to the University of Southern California, Americans spend around 23 hours per week on the internet. The research firm Gartner has forecasted that a quarter of all people will be spending “at least” an hour a day in the metaverse by 2026. This will not only affect our mental health but also our physical fitness levels. The amount of outdoor exposure will be drastically reduced and lead to lowered vitamin D levels, an increase in a sedentary lifestyle, and extreme fatigue. Users, who wear VR headsets for over 30 minutes, are already reporting symptoms like headaches and exhaustion.

Privacy issues and security are also worth mentioning, given the fact that social platforms have brought their fair share of issues. Security experts are discussing potential risks of phishing attacks, vulnerable AR/VR devices that could become the gateway to malware invasions and data breaches, an absence of legal documentation protecting user identity, collection of user information by advertisers, and collection of tons of personal information, including brainwaves, biometric data, health information, preferences and more.

Not to be too negative, there are some notable health benefits that we need to mention as well. Since metaverse will overcome geographical limitations, it will greatly benefit medical research and treatment. Experts have proven that virtual reality can be effectively used for PTSD and various phobias treatments. The metaverse would give millions of people access to realistic virtual therapy.

See you in the Metaverse

Researching this new alternative digital world really opens up a whole new universe of possibilities that can transcend beyond our wildest imagination.

Not far from now, we’ll be attending concerts, festivals, and sporting events in the metaverse, wearing our favorite NFT designer sneakers and clothes. We’ll attend a virtual fitness session and hurry to our next work meeting in our metaverse office. We’ll spend our lunchtime playing the trendiest games in the ‘verse earning tokens which we will, later, spend in one of our favorite virtual clubs.

For this to happen, there is still some development to be done. VR headsets will need to become lighter, their battery life will need to increase, and – if mass adoption is what we want to achieve – the entire hardware will need to become less expensive. Oh, and one more thing – when they successfully link signals to our legs, our avatars will no longer be flying torsos, but will have functioning legs as well!

Metaverse justifiably raises speculation and concern. It’s clear that some people could potentially find the metaverse more appealing than the real world. It could offer a practical escape from reality. How metaverse will affect people largely depends on the companies that create it and the way individual users participate in it. Companies can minimize harmful effects by creating regulations, which would install rules and ensure safety. Except, that would complicate things again since the crypto community doesn’t support the idea of central authorities imposing regulations in their own digital realm. The communities would split into centralized and decentralized metaverses, so it would again mimic the state that we are living in today’s “physical universe”.

No matter which metaverse you prefer, one thing is clear, investing in this novel virtual universe sounds very lucrative. In 2020 the metaverse was valued at over $40 billion. Experts are estimating the number could reach $800 billion by 2024 and from $10 to $30 trillion in the next 10 to 15 years. All of this is only speculation, but the current hype around virtual land, real estate, or any other virtual asset ownership seems justified.

We shall see what the virtual future has in store for us. The GoCrypto team definitely wants to dip its toes into the pool, which is why we have already set up our offices in the Bloktopia metaverse.

Meet you in the metaverse soon! 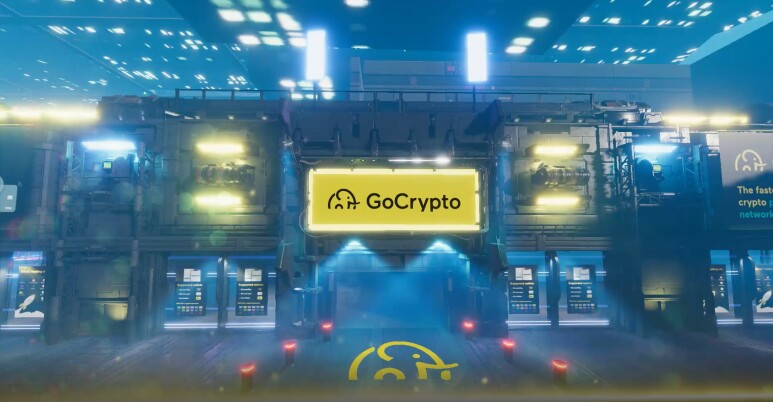