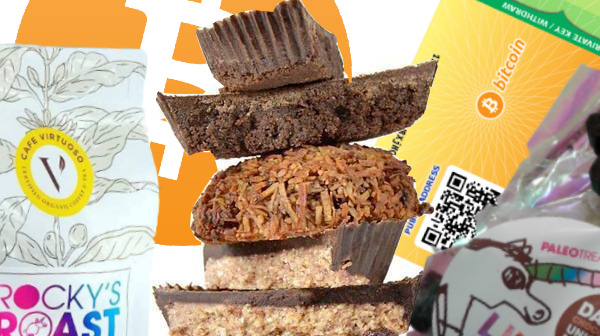 I Paid For Coffee and a Peanut Butter Cup with Bitcoin!

The day had come at last.

I'd conducted my research on local vendors. I'd prepared a system for secure transaction signing. I'd bartered and exchanged and negotiated with people from the other side of the planet. Through the combined efforts of a trustless system of escrow and the anarchical support of a third-party moderator, I had exchanged for Bitcoin via an open market. The total was withdrawn to my paper wallet, created in advance, for just such an occasion.

And that occasion was today.

I got out of bed, double checked each device, dressed myself right for the occasion, and opened my prepared envelope. Inside were printed directions for today's destination. I would be going to a bakery in San Diego by the name of Paleo Treats. 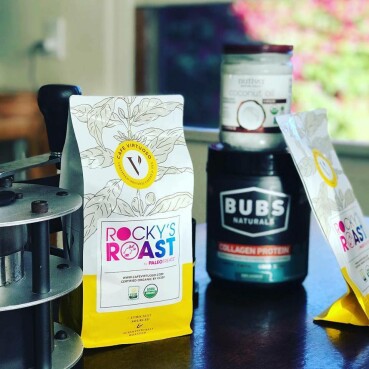 Moving closer to San Diego turned out to be a godsend for cryptocurrency exchanges. In a time when paying for a good or service with cryptocurrency as your medium of exchange is still a fairly novel concept, those few vendors willing to humor the currency will most certainly be found clustered in the larger cities. Hong Kong, Tokyo, New York, Los Angeles, Amsterdam, and of course the bay area are all going to be your most likely locations for finding a vendor willing to trade in-person using a cryptocurrency.

I got in the car with my secret envelope. I'd chosen to use an old tablet with Electrum installed to serve as a cold wallet application. To connect to the network, I'd brought my phone to establish a cellular connection with data through an MVNO. Last in the envelope were the Bitcoins themselves, stored on my paper wallet.

I waltzed into the store, held up my envelope, and proclaimed:

"I carry a secret that nobody else would ever be able to guess in a million lifespans of the universe. And I come today, seeking to exchange it for pastries!"

The shopkeeper behind the counter, Brenda, was quick to conclude that I was the person who inquired yesterday. I affirmed, and she proceeded to give me a small tour of the shop. On this particular day, I was feeling in the mood for stronger flavors. Dark chocolate and coffee were foremost on my mind, and she made her recommendations. I made my selections. We both made our way to the counter and stood on opposite sides of the now-obsolete cash register. It was time for the transaction.

Despite my preparations, the process was still a little fiddly and unrehearsed for both of us. No shortage of our shared jitters were attributed to the anticipation of the moment -- according to Brenda, despite all the years of accepting it as valid tender, this was only the second Bitcoin transaction the establishment had ever made. I had taken the preemptive steps of connecting my tablet to my MVNO before entering the storefront. It was time at last for the dramatic reveal.

I procured from the envelope my printed wallet. With careful hands, I cut free the private key with my swiss army knife, and scanned the code. Electrum recognized it, and displayed a new wallet with its value. I showed the shopkeepers, and we concurred the value of the balance.

"Alright. So what will my total be?"

While we both agreed that the sum should come out to be about forty-four US dollars, the matter of measuring the value in terms of a cryptocurrency's denomination was still a foreign concept to both of us. I suppose it felt like what one might expect to feel when converting between metric and imperial. To be immersed in one system of measurement for a lifetime can make it hard to toggle over to a different perspective. And it served as a good personal reminder that I should be thankful for my familiarity with mathematics.

Perspectives were shared, values negotiated with. "Suppose we say Bitcoin was about fifty-seven thousand right about now. Safe to say that forty-four divided by fifty-seven thousand would be about right?" I crunched the numbers on my calculator, she did the same, and we both consulted her manager Kim -- a third party -- to verify the value. It was settled. I was to pay 0.00077193 BTC, along with the appropriate mining fee.

Brenda procured the storefront's QR code -- their public key -- which I scanned. A transaction was prepared for the posted amount, all set to be broadcast to the network. I displayed the transaction, we both agreed to it, and I signed it.

Celebrations were shared, with plenty of thanks exchanged between both parties. It was a slow day, and I was inconveniencing nobody behind me in line through my presence, so pictures were taken and shared while we waited for a few blocks to be verified. 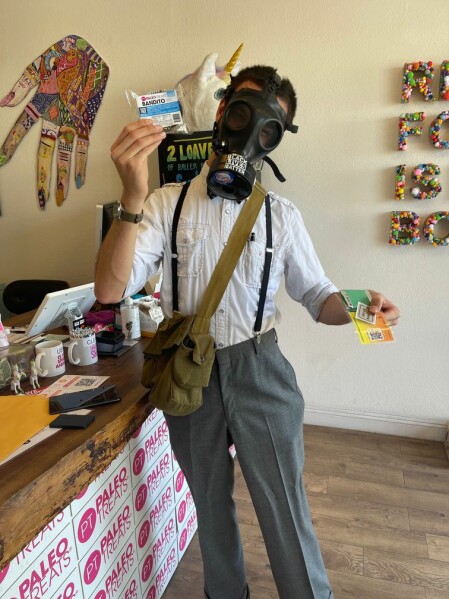 And that was that. I brought my coffee beans and confections back home with me, along with my carefully folded codes, my offline tablet, and the envelope used to carry it all. As I sat down to brew my coffee and unwrap my goodies, I began to mull over the transaction I had just conducted.

The process I'd undergone had made for an extremely secure means of transaction. My tablet had only been online for a handful of minutes total, during which it had been connected to a private cellular hotspot made with a custom password. The private key I used to sign my transaction -- one created on an offline computer -- had only seen the light of day for a few fleeting moments before it was scanned and consumed. From start to finish, there was very little opportunity for a malicious actor to invalidate my transaction or siphon my funds. In fact, due to the nature of cryptography, it might be all but impossible for anybody to have any say over how I spent that day's money, short of mugging me. No card was declined, no overdraw fees instated, no central authority of any kind was able to make or break the validity of my spending decision.

Altogether, the spending process was also rather expedient. While I chose an overkill method of security for my transaction, I've still seen some transactions with ordinary fiat that took much longer. Some of the customers at my place of work go through card after card, trying to find the right one to fit in the scanner or the chip slot or the tapping region, ultimately holding up the line behind them. Even when I was using the oldest, slowest cryptocurrency out there on a busted old tablet and a dumb phone, I was still pretty fast with my transaction. It isn't hard to imagine a customer walking into a store with a specially dedicated phone, scanning a QR code, and sending a modern cryptocurrency in a fraction of a second.

What about the value of my purchase? I may have just chosen a good time to commit to the process, but the value of my currency actually appreciated over the course of my exchange. When finding sellers on a marketplace, I was able to negotiate for a reasonable price on my own terms, and protected my transaction with escrow. When withdrawing funds to my wallet, I did so in bulk to mitigate the flat rate for the withdraw fee. And when I made my purchase, there was no state or federal tax associated with my transaction -- after all, how would it be enforced? The only transaction fee associated with my purchase was the miner fee, which came out to be pretty reasonable in the grand scheme of things. From the start of the process to the end, I had exchanged about one-hundred US dollars for about that same exact value in Bitcoin. I had then spent half, and moved the other half to long term savings.

And while I don't mean to gush, I am extremely happy with my purchase. There's nothing quite like eating a massive peanut butter cup made from dark chocolate and mixed with rolled oats -- except, perhaps, eating a massive peanut butter cup alongside a cup of locally-roasted coffee. Besides that, I also snagged a baggie of dark fudge chocolate chunks. For the sheer bulk of the coffee I purchased, and for the quality of the goodies I consumed, I think I more than got my money's worth out of the experience. 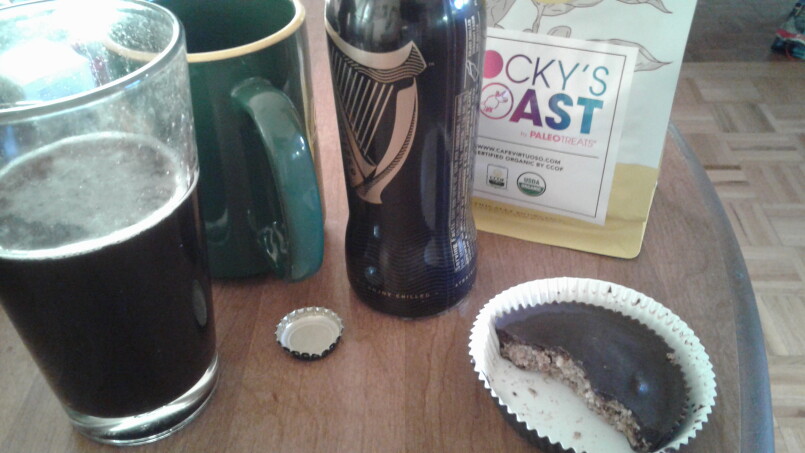 So what are our primary takeaways from this experience?

I can only proclaim my first impressions, but if a local business is brave enough to give cryptocurrency an honest shot, they're probably also an establishment worth patronizing. And if you know exactly what you're doing, it's not impossible to make transactions from your national currency over to cryptocurrency, and from there to the goods and services of your choosing without losing much value or time in the process. This might just be a sign of the relative stability of the currency I chose to use during the time I chose to use it, but I think that the fact that this process was possible at all should be seen as encouraging.

For those who feel familiar enough with their cryptocurrencies of choice, I implore you to give the act of spending them a try, if not just for practice. You don't even need to withdraw from your earliest reserves to make it happen. The modern infrastructure for turning fiat into cryptocurrency can be fast, inexpensive, and anonymous if you know where to look. Transactions with local businesses are always a worthwhile pursuit, as you're actively increasing the surplus of wealth for the people in your local community. But by making cryptocurrency transactions with your local businesses, you're not only supporting your local economy, you're ascribing indisputable legitimacy to a new form of spending. It's hard to wave away a cryptocurrency as little more than 'imaginary internet money' when it's accepted as payment for cars, gas, coffee and cupcakes in exactly the same way as a Paypal transaction or a debit card would be accepted.

I think a lot of the time, we forget what cryptocurrency is, intrinsically. When we buy shares of crypto on a exchange, we tend to treat it like a stock or a property, which delimits its true potential. Cryptocurrency can serve as a store of value, yes, in that more people are more willing to exchange it for larger sums of fiat currency with every passing day. But it can serve as so much more than that, by making tangible differences in how consumers choose to engage in local business. After a point, we may find ourselves in a future where more vendors are willing to accept it as a part of their business model. And should it come to that, we'd have to ask ourselves whether Bitcoin is appreciating in value relative to the dollar, or if the dollar is depreciating in value relative to cryptocurrencies.