There are games that have massive advertising and promotion and ultimately disappoint at the full line. And then there are those that remain inconspicuous and are hidden gems that offer happy finders a great experience and gameplay. This is also the case with Unruly Heroes. A fairly mundane name doesn't seem to tell you much, but when we reveal that he is the main character of the monkey king and his friends, you may hunt down memories and then tap your forehead. The game is based on the popular Chinese novel and in our country is known at least a series based on it. At least the older player. Anyway, in the game will come into their own and those ignorant. But they have to be very patient and show great skill.

The title is interesting at first glance with its charming art work. Chinese culture and mythology looks like painted on a monitor and TV screen and looks at it well. Whether you walk through a canyon of bones, a Taoist temple, an underworld, or hell itself. Sounds and music were also great. Unfortunately, the same cannot be said about control. Oftentimes, breakpoints await you, where the lack of control becomes apparent. Even in the PC version is certainly more suitable gamepad, with which the basic activities seamless, but the advanced ones you will confuse your fingers. 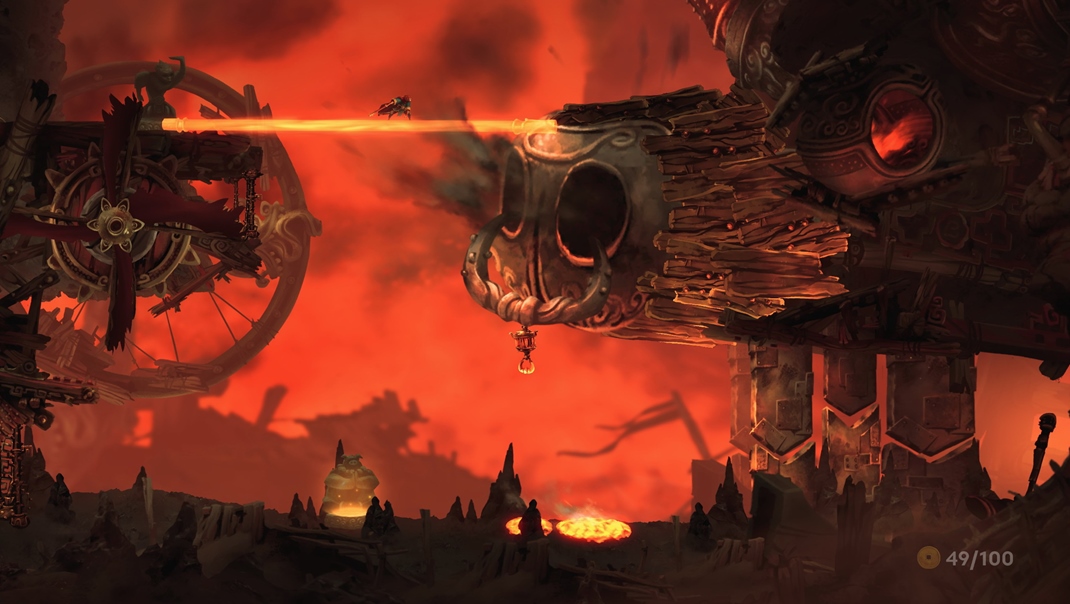 The most enjoyable adventure is cooperation, where four players can divide the available characters - monkey, brave, sage and monk, who navigate the goddess of grace on a road full of enemies and obstacles. You can also play solo and then switch characters as needed. And if the current one perishes, but this is not a big problem in this game. From the nearby checkpoint you continue with another of the heroes and just hit the spiritual remnant of the poor and immediately put into your lineup. And it's ready for immediate use. This will be appreciated in boss fights. You meet the smaller ones often, and they just need to reduce their life-wide indicator to zero in combat. The main bosses are already tougher, you have to defeat them in three stages and each is specific. But you still have the opportunity to continually revive your comrades.

Normally, however, you encounter various bizarre creatures and animals that the creators have often lent to human features. Each of the heroes can beat them with a primary melee attack and a secondary one with a slightly greater impact - for example, a monkey throws a stick and returns it as a boomerang. In addition, enemies can be caught and thrown into others, and they then fall like skittles. Throwing is also used for other activities, such as catching a bomb somebody whispered at you and hitting an obstacle that explodes. Heroes also gain energy, and when there is enough, they can use a super attack with destructive power. In addition, they can jump and two use a useful double jump, the other two use sailing instead. You often use wall bouncing to get to the higher platforms. You can also try evasive maneuver and move quickly.

In the field, you often encounter three different sculptures where the selected hero can apply his or her unique ability. The monkey creates a brilliant bridge with its significantly enlarged mallet. The sage fires and directs an energy sphere that bounces and destroys or activates otherwise inaccessible objects. The pig inflates literally like a balloon and soars, but as a rule it is important to be careful not to puncture it. In some places you use a combination of two or three statues, which you can also move to adjust their optimal position. The monk does not have a statue, but as the only one can break the rocky barriers and the most resistant obstacles 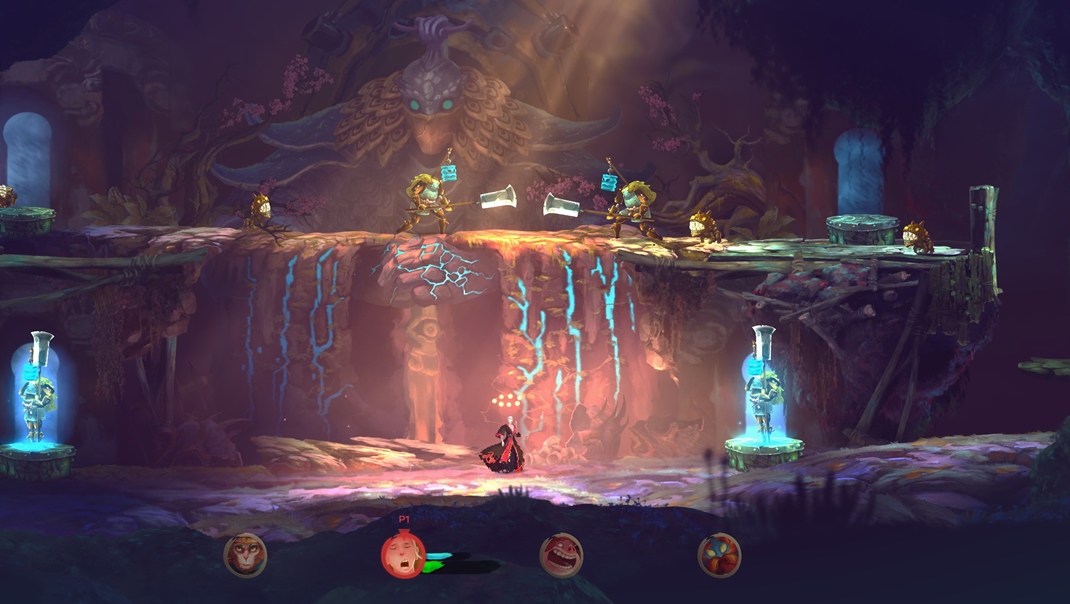 To make matters worse, you will get passages where you control other characters. For example, you will seize a wolf leader to whom you incarnate. You can then use his spears to hit targets that deactivate the gates. In addition, when you howl, you are obediently followed by the orderly wolves, which you can apply as a weight when you bring them to the platform to be loaded. Or manipulate them in a different way. You can even use them partially to fight a boss. Other controlled creatures serve differently.

In the field, you will be hopping on platforms or other, often moving objects, smashing things, spikes, bruised balls and axes, special lamps that need to be filled with energy. Interesting are blue growths, which temporarily activate certain platforms, but also make visible enemies, who in their intangible form can not intervene. Later, hot lava protrusions, which solidify after using a special object and can be jumped over. And there are more imaginative parts like this. Wandering is diversified by collecting scrolls that unlock artworks and bonuses as well as coins for which you purchase four new skins for each hero.

All this would be great if the creators somewhat relieved of the difficulty or added the possibility of her choice. Some passages pass without any problems, but there are several very difficult sections, which you will repeat more than ten times. You will want to break the driver and castrate developers. These are especially places where you need to act quickly, but also to accurately and flawlessly tune a series of activities - jumping on often moving platforms, activating switches, fighting, using skills. Usually you are chased by some monster or mercilessly approaching traps and even a second delay becomes fatal. Perhaps it would have been better if there had been no mention of the breakneck and over-combined control, and even more reasonably placed chekpoints would have helped. They are not usually far from each other, but they are extremely difficult to reach in critical passages. 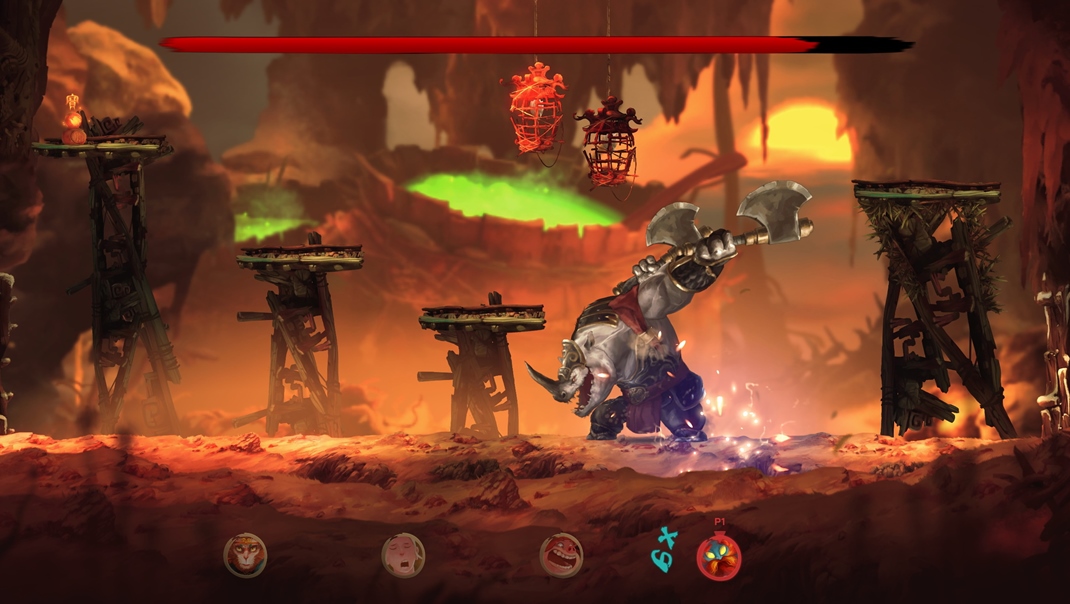 Occasionally extreme difficulty is the main reason why the game, despite its visible qualities, discourages many. Therefore, if you have the option, prefer local cooperation. It's more fun and less torment than when you play solo. Unfortunately, you will not find anyone on the online PvP fights. Although there is this option, you simply won't see anyone in the lobby.

Unruly Heroes is an amazing game, but only for the toughest players, who will not break very difficult sections, which even more complicated handling is difficult. It could have been one of the best platform games and platforms on the market if it were better balanced and more welcoming. The level of entertainment is very high, but frustrating passages unnecessarily hurt her and deprive the game of fans. But if you are attracted by extreme challenges, especially in the advanced stage of the story, you will come into its own.