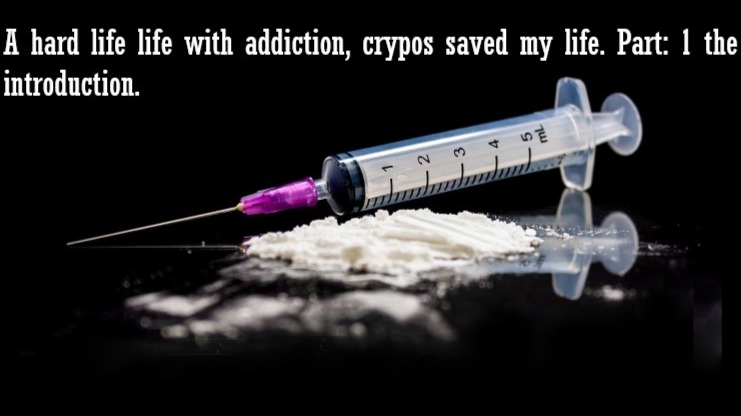 A hard life with addiction, cryptos saved me. Part: 1 The introduction

So well how do we start this one. Well let's start from the beginning

I have always been prone to outside stimuli and a very emotional creature. My childhood indeed where great, lots of friend, mildly popular among friends and girls aswell and not to forget a very good family. Awesome grades in school, past 9th grade with almost A in everything. In the 9th grade something start to happen, lost motivation for life lost the drive for a lot of things including things I loves like playing LoL with friends and weight train.

My grandfather was divorced many years prior and had met what i thought and sill think is a lovely human. She has 3 child's and one of them I was very close to. Well he did drugs. One day a Friday my buddy and I had a sleepover at my house the thought was to play LoL together and also my parents were out of town. We can call my grandmothers child I was close to Jason, yes I call her that but I know she isn't my real one. I knew Jason sat in his apartment smoking spice and I of course was depressed and now felt willing to almost try anything to ease my pain. I convinced my buddy Jake (we can call him that) That we had to go to Jason. He wasn't hard to talk over, he also had been down for a straight few months.

We take the bus to Jason it takes just 10 minutes. We knock on his door and he opens and what I clearly see he is stoned as F#@k. We went in and sat down in his couch, he had the spice pure in powder he just mixed it with tobacco and tossed it in the cup of the bong. He loaded it up held out the bong against me and Jake, Jake just looked at me and with his eyes told me you're first. Well now I was quiet nervous, but I lighted it up and damn I coughed so the damn neighbors most have heard me. During this time Jason loaded it up again and Jake took a sip, same there he cough that I thought his stomach would soon arrive on the floor.

I started to feel it now, I layed down on the couch and looked at the TV there was a nature documentary rolling. I just felt the pain smoothly went somewhere else, I felt relaxed all tensions gone and I looked at Jake and we just started laughing. We had no clue what we laughed at, just laughed and it was so liberating for the soul.

This was my first encounter with drugs, I was fifteen. What I didn't get was that time alone would later leave me in the hands of drugs, a life there everything was about drugs, take drugs, score more drugs, betray my values, rehab, overdoses, wreck relationships with friends and family, homelessness and a lot of  other filthy stuff.

This was the first part of a long story, quiet short but just an introduction where it all began and how. In a part away crypos will make their entrance in my life. Hope you enjoyed this short story, hope you continue and read the other part of "A hard life with addiction, cryptos saved me."   there will be released a minimum of 3 part a week, these will dive in, in the truly depth of hell and more well-developed.

I'm glad I could borrow the time of yours.

* The grammar could be wrong sometimes, working on it. If someone spots grammar wrongs please pm or write in the comment section because I want to learn as much as possible.

From heavy addiction to crypto nerd.

This is a blog based on my past life and the rebuilding of my life as a proud drugfree me and how crypos "easy said" kind of saved my life.