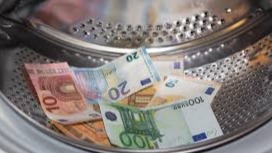 Money Laundering is a good thing

I read alot of posts on publishox about  "Money Laundering".  Usually they are comparing crypto and fiat in terms of which is used more to launder money etc.... I'm not doing that. I'm telling people to launder money whenever you can. It is noone's business what you do with your money. Especially the criminally insane that occupy governments.

Money laundering wasn't a crime until 1986

Were people pushing for these types of laws since 1776 or something? No. "The People" didn't come up with these laws. There was no mass movement to allow government to know all about your financial transactions. This is about power over YOU. Not "criminals".

BOB: "Hey Joe, you know what I think America and world needs?"

BOB: "Well, if you withdraw or move large amounts of money around, say 5000 dollars or so, your bank will tell the government you did this in case you are sex trafficking, or worse.....selling the dope!"

JOE: "So, I can't buy a used car without being flagged and reported?"

BOB: "Yeah, just in case your doing the drugs, or running some sort of prostitution ring , or even worse......you think your money is actually yours"

Sex Trafficking, of course is no joke. Those people deserve to be under a prison somewhere. However,Instead of concentrating on a secondary effect, the money, maybe they should concentrate on the crimes themselves.  Arrest people for the actual immoral act instead of taking freedom away from 99% of the world(who are not sex traffickers, or terrorists).

Clearly, at least in Canada, it's pretty pointless anyway.

Cryptography and the people that came up with it are heroes. They are taking power away from these inept busybodies.

I know exactly what a lot of people here say. "No, we want to comply with the governments so they won't regulate Bitcoin".  I have news for you people. If they can regulate and/or ban the blockchain...............the blockchain and cryptocurrency are USELESS.  "They" or "The boys" will turn crypto into their own private playthings as fast as they can. They will require whatever paperwork they want. They will take as much as they want. They will know who you are and where you live. They want it all.

So, launder as much money as you can. Send your coins through as many mixers as possible. Whatever it takes.

“There's no way to rule innocent men. The only power any government has is the power to crack down on criminals. Well, when there aren't enough criminals, one makes them. One declares so many things to be a crime that it becomes impossible for men to live without breaking laws.”