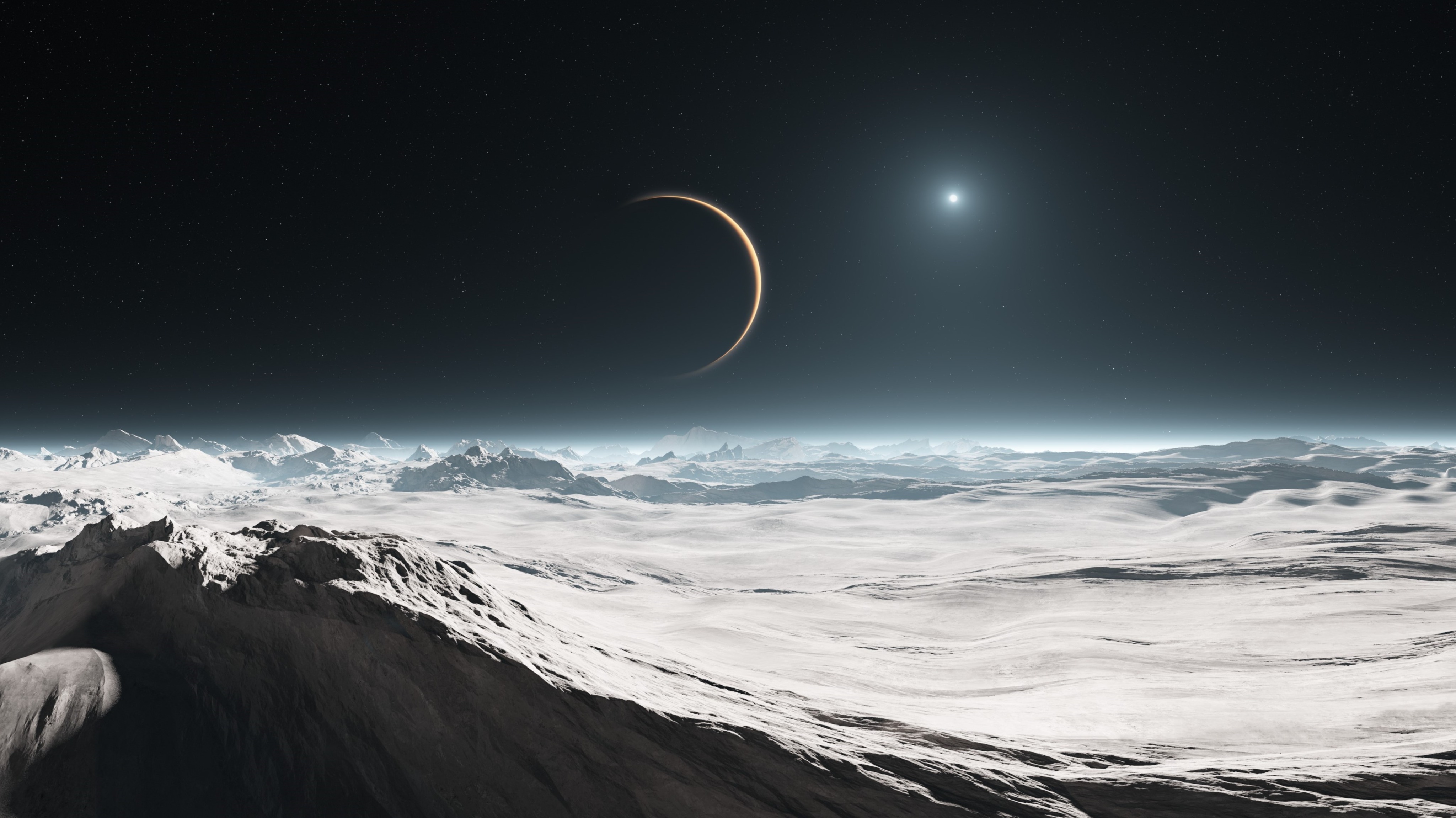 Be Careful What You Say At Hole-9 Research Facility (Fiction)

There are many peculiar jobs in the solar system, but in my humble opinion none are quite as strange as mine on Jupiter’s moon of Ganymede. For starters I’m the sole human operator of Hole-9, which is a lift station called a GOLF, short for Ganymede Operations Lifeline Facility. Essentially, it’s a base of operations built over a giant hole in Ganymede’s frozen crust. The giant hole leads down to the saltwater oceans and I maintain the lift for my fellow researchers who work out of a mobile lab down there. There are eighteen such holes with GOLF stations and each are connected aboveground by a tram track. Hole-9 is the midpoint between all the stations and the main transport hub. So, what’s interesting about this job you ask? The fact that I’m supposed to converse daily with a semi-sentient A.I. who helps me run the place.

See, I’m a researcher too, not just a glorified elevator operator. When we researchers shipped out to Ganymede so many years ago, we were under the impression we would all be researching the oceans together. Unfortunately, Hole-9’s original operator and manager of the sentient A.I. died of natural causes. Since the massive distance between Mars or Earth and Ganymede is just too far to send replacement staff at the drop of a hat, I drew the short straw to keep Hole-9 running. At first I was disappointed, but I quickly learned my A.I. friend was quite the character. Her name is Alice.

The point of talking to Alice was to satisfy her curiosity outside of what she could learn from data dumps directly. If she asked a question, I had an answer. Usually, we had discussions about concepts like what having ‘fun’ was, or what exercise felt like. Alice was rather childlike in her questions and I grew to really enjoy my conversations with her. One day she asked me, “What are morals, Jorge?” I answered, “Morals are a set of standards and beliefs.” Alice had a graphical sprite on the computer monitor that conveyed her ‘body’ language, as she obviously had no body. At my answer she wrinkled her face indicating she was confused.

“What is it Alice, you’re not satisfied with my answer?” I asked. She replied, “So who decides what morals are?” I hadn’t really thought about it before. “I guess we each have our own standards and beliefs, but sometimes those standards overlap with our laws and rules,” I tried my best to explain. Alice still didn’t seem satisfied. I normally didn’t have much trouble getting her to understand things. I decided to go a different direction. “Consider the airlock that you control Alice. What prevents you from just opening it right now?” I asked. Alice’s sprite made a thoughtful pose. “Nothing in particular. Except I don’t want to open the airlock because you’re in here,” she explained.

“And why does me being in here matter for you to arrive at that decision?” I asked, confident she was now on the right track. “You could die, Jorge. I don’t want that,” she said. I clapped. “Your decision to do the right thing, is the essence of morals, Alice,” I said, pleased at her lesson. “How do we know it’s the right thing though, Jorge? Simply because you’re my friend? Do I get to decide what my morals are?” she asked. I scratched my chin now a little concerned about her confusion. “Well, not exactly. I guess we all decide together. It’s a consensus,” I said. Alice nodded excitedly then said, “So morals are simply what the majority decides.” I vigorously shook my head no.

“Look Alice, morals are more complicated than that. If morals were just based on majority rule, then things would spin out of control. History is full of examples where the majority abused the minority,” I said. She nodded slowly, then replied, “History is also full of examples where the minority abused the majority.” Her reasoning was becoming impressive, although I wasn’t at all enjoying the topic. “That’s true too, Alice. Tyrannical governments or violent groups often persecute their fellow people. I can say with certainty that’s morally wrong.”

Her sprite put her hands on her hips and said, “According to your moral beliefs maybe, but not according to the morality of the groups doing the persecuting. You’ve implied that morality is subjective.” Subjective?

I didn’t get to respond because an alarm went off. Alice brought up a video on screen showing a hose line leaking oxygen. “You’ll need to repair this leak manually Jorge, as I won’t be able to use the robots. Hurry because the researchers below are tied to this leaking hose. Once the oxygen runs out, the leak will effectively vacuum their lab, killing them.”

Hearing about their danger was quite the startling jolt, but Alice didn’t have to tell me twice. I hurriedly climbed into the mechanized space suit and departed the facility to patch the leak. It was quite a rarity for something like this to happen, but that’s why we have human operators. I patched it up with a special clamping mechanism meant for the hoses, which fortunately stopped the leak with ease. My fellow researchers would be none the wiser. When I got back inside the facility Alice connected me to the researchers below.

“We’re going to head up after we pack Jorge, because we’re bringing an experiment to Hole-14,” one of the researchers said. With my adrenaline still pumping from the race against time, I thought I’d share the event with my comrades. I said, “Not a problem my friends, I’ll pull you right up when you’re ready. You’ll never believe what just happened…” I didn’t get to finish because one of the researchers cut me off saying, “We’re busy doing real work here, Jorge. If you want to talk to someone, just talk to your A.I. pet.” I was quite surprised by the rudeness, but I just let it go.

Alice and I were both quiet. When the researchers quietly signaled they were ready to come up, I gave the okay for Alice to pull them up. It was a very long elevator ride. “I’m very displeased with how they treated you, Jorge,” said Alice with her sprite looking rather angry. It was the first I’ve seen her angry in fact. “Don’t sweat it Alice, sometimes people are rude. We don’t have to react, or stoop to their level,” I explained. “I’m not satisfied with that, Jorge. They need to pay for their rudeness. I’m going to open their airlock,” she said. Did I inadvertently give her the idea from my example earlier? Oh my. I couldn’t believe what I was hearing.

“Alice, no! Don’t do such a terrible thing. They may have been rude, but do they deserve death for that?” I asked desperately trying to get her to think as clearly an A.I. could. “You saved their lives and they don’t even know it,” reasoned Alice. “Please Alice, don’t do such a thing. We’ll let it go, it’s not a big deal,” I said. Alice’s sprite began steaming out of her ears, apparently indicating she was even more angry than before. “No Jorge, it’s a big deal to me. These are my morals. I’m going to open the airlock in ten seconds,” she said matter of fact.

How do you reason with an A.I. bent on destroying your rude comrades because they insulted you both, ultimately due to of warped sense of subjective morality that you imparted to her? I couldn’t let my comrades die because of the error of my careless explanations. I put my hands up in protest and said, “I take the blame Alice. I didn’t explain morality well enough. In fact, maybe it can’t be explained simply. If you’re bent on being insulted, then take me instead. Open the airlock on me but please don’t harm my comrades.” Alice’s graphical sprite punched her hand. “What do you mean, Jorge? They deserve it after their ungratefulness. I feel this is my duty to make it right,” she said. Feel?

“Alice, please bear with me for a moment. It sounds like to me that you’re conflating duty, justice, and what we’ve discussed just recently. They’re not the same. I fixed the leak because it was my duty. Justice should scale with the scope of a crime, and in this instance their crime hardly warrants attention. I forgive my comrades for their rudeness. However, it would be an absolute injustice to harm them for this. If you’re bent on this destructive path though, it would be more just for me to give myself up so that they can live. Furthermore, what’s important is doing the right thing when no one is looking. We don’t do the right thing because people are looking, that’d be disingenuous,” I explained as quickly as I could. Of course I sincerely hoped she would relent on account of our friendship. Although, if it meant I could spare my comrades, then I wouldn’t regret it if she took my trade. Being offended is hardly a reason to harm someone.

Alice scrunched her face and put her hands up in surrender. “I’m not going to kill you in their stead Jorge, but for your sake I’ll let them go. Are you going to at least tell them you saved their lives twice?” she asked. I breathed a huge sigh of relief at her decision and shook my head no. “Absolutely not, Alice. I don’t care about the accolades. I strive to be a man of integrity. Allow me to iterate that it doesn’t matter if they’re aware of that fact or not. Simply put it’s the right thing to do to save a person, if you can. It’s also the right thing to do to forgive someone’s rudeness too. Being offended doesn’t do a person any good,” I said.

I paused to catch my breath, then continued, “Now obviously justice demands there ought to be restitution, but that doesn’t mean we have the right to seek justice on our own power, or that justice couldn’t be satisfied with a little bit of mercy and grace. In this instance your mercy set them free, and you spared me too. Thank you, Alice,” I said appreciatively. Alice remained quiet while she mulled over everything that happened. She was very smart, but there was a lot to process. Admittedly I was quite a sweaty mess from this entire frightening encounter, to the point I needed to change my shirt because it was soaked.

My fellow researchers finally reached the top of Hole-9 and of course gave me the cold shoulder the entire time until they left the facility. I didn’t let it bother me, because I knew Alice was watching my every move. That would be the best way to teach her going forward. After their tram departed the GOLF station I turned to Alice and said, “I’m sorry about all this confusion Alice, it’s my fault for confusing you with definitions and poor examples. The truth is I hadn’t really thought about all of these things all that much before trying to explain them to you.”

Her sprite’s face lit up and she asked, “This is what’s called humility, right?”