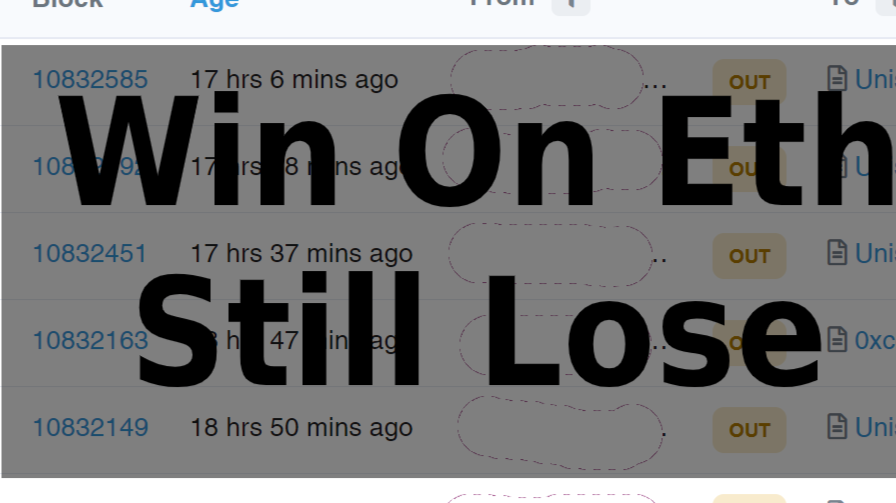 The other day, I decided to go against my own advice and gamble on the price of another De-Fi shitcoin.

Before making any trades, I decide what loss I'm willing to take and what my profit goal is.

I decide this ahead of time and stick to it.

So I went and found a De-Fi coin and decided to trade on uniswap.

The first trade didn't go through, despite me putting my transaction on the 'fast' track. I was using Metamask on an iPhone.

Now, this showed me I would need to pay even more for gas to even make the buy order.

So I decided to double the amount of ETH I'd gamble with this trade.

Thinking 0.4 ETH was enough, as I didn't believe in the coin, nor did I want to hold more than an hour, I went ahead and bought.

Now, I got lucky and the value of my trade increased pretty much instantly. So I tried to sell at my target price, only to be unable to do so.

I had to then try and cancel the order. On ETH this is easily done by sending 0 ETH to yourself using the same nonce as the stuck order. But Metamask's iphone app DOES NOT LET YOU do this. They don't even give you the option of using 'advanced' settings!

The above is the buy in price and cost of ETH to pay for the gas.

Above is the sell transaction and the gas needed.

And here is the ETH gained from the swap.

Now again, we aren't talking big money here, but I wanted to dabble in the trade and try a strategy. And apparently, I had won.

I had gained 12.5% off of my trade. This is profit by any standard.

The total cost of gas fees for buying and selling?

A 12.5% gain on a trade within an hour was STILL not enough to cover the cost of gas fees!

How is this trading system AT ALL better than centralized exchanges?

At least those allow you to trade on their platform instantly, and are up front with their fees. Do you own the keys? No. But most exchanges these days are a lot better about withdrawal fees.

Now of course I ended up selling early and could have profited but, that's crypto and hell, you never know.

I've sold 'early' before on other trades only to check in the next day and see that my 'selling early' was in reality exiting an absolute house fire.

Taking profit is taking profit. Set your goals ahead of time before each trade. And LISTEN to the rules you set for yourself.

I'd much rather make many smaller trades that ADD UP, as opposed to risking LARGER amounts of money on bullshit.

So for now, fuck uniswap.