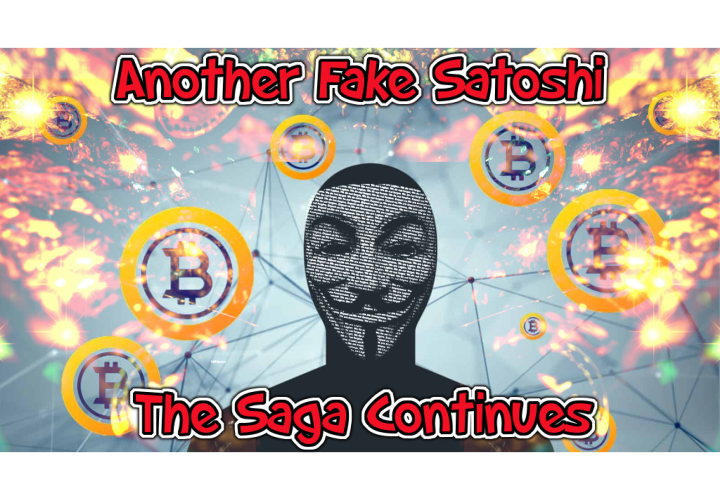 By viraladmin | Everything Cryptocurrency | 19 Aug 2019

One of the things one will often find in conspiracy theories is people drawing parallels and making conclusions that are not real just because they seem to sit well within the parallels they have drawn.

As I sat reading part 2 of Satoshi's reveal this is exactly what I thought. This person is trying to feed on people's need to believe anything that has parallels connected for them. This person keeps using numerology parallels to try to paint the vision that they are Satoshi. One has to admit the parallels are uncanny, but just as is the case with most conspiracies, uncanny parallels does not make something a fact.

Yesterday I was talking on the publish0x telegram chat discussing this claimed Satoshi reveal and below you can see a piece of what was said between me and another user. 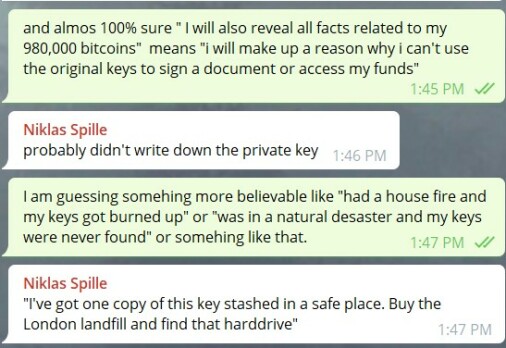 My posts are in green in the above conversation. We were joking about what would be the reason that this person claiming to be Satoshi would have for not just signing a document with the original keys or why he wouldn't be able to access the bitcoin wallets. As you can see I was already 100% sure a reason would be given.

Sure enough that is exactly what took place today in this claimed reveal. Excuses given to us about why this person claiming to be Satoshi didn't have access to the funds. The claim was no where near what I was predicting and instead was exactly what Niklas Spille said, and this supposed Satoshi added details about about only moving the wallet.dat file.

The fun thing about all this, is that it reads as if answering every single question ever asked without revealing any proof. It is incredibly hard to debunk claims when there is no factual evidence.

After yesterday's reveal I instantly sent a message telling him his reveal had already been debunked with a link to Satoshi - the fake reveal: Part 1. It was shortly after the website was fixed and the "typo's" were fixed.

Not only that, he felt the need to address my article in today's part 2 of this claimed reveal. This is why the article opened mentioned "Also regarding the petty issues like spelling mistakes and network outage". You will notice one of the other things I mentioned was his typing style was completely different from the original.

Even that was not overlooked by this person claiming to be Satoshi.

Moving on, in part one of this claimed reveal, he praised Hal Finney over and over again. I am quoting part one below so you can see what I am talking about. Keep in mind this is the new revised version that corrected the "cyberpunks" to "cypherpunks".

Hal Finney was an esteemed programmer and computer scientist in California. He was a member of an activist group called the cypherpunks that advocated the widespread use of strong cryptography and privacy-enhancing technologies as a means of social and political change. Hal was a huge help to me. Together, both of us created the first Bitcoin transaction in 2009.

Hal and I began working on P2P Electronic Cash System – it wasn’t named Bitcoin at that point – in 2006-2007 and more extensively in 2007-2008. I proposed a solution about electronic cash which utilised his idea on the Reusable Proof-of-Work system (RPOW) and he really wanted to refine it. Hal was an idealist and a true cypherpunk and he didn’t care whether it would be successful, while my vision was to bring back BCCI in a digital commercial form.

So as we can see from this quote he is praising Hal. He gives Hal credit for the RPOW system, he says he and Hal started working on this project in 2006 and continued through through 2007 but that it was not at that time called bitcoin. We can see it in his own words from the quote above.

In the part two however, he changes that and claims work on bitcoin didn't begin until 2007, not 2006 as claimed in the first post. Almost as if he just stole all of Hal's idea's and used them without Hal.

I began working on the decentralised digital currency in 2007.  While the recession fiasco of 2008 was taking place, on the 31st October 2008, I published the white paper “Bitcoin: A Peer-to-Peer Electronic Cash System.”

Now this is the part that doesn't sit well with me. Everyone knows Hal was a major part of bitcoin in the early days, however if you had worked with someone hand in hand on what would lead up to bitcoin, and you borrowed their Reusable Proof-of-Work algorithms, would you then turn around and hand the keys of the city to someone other than that person? Wouldn't you see him turning over the bitcoin project to Gavin Andresen as a complete slap in the face to Hal? Why not give Hal the project instead of Gavin? This doesn't make any sense.

Now lets move on to the next topic of discussion. Over the years countless conspiracy theories about who Satoshi might be have arisen. One of those claims has been that Satoshi was never just one person but rather a group of people who all helped code bitcoin. To anyone who studied the code from the early days this is pretty much an absurd claim.

Every coder has a personal style that is unique to them. This is so much true that a lot of people who studied the code from the early days have said the code appeared to be from someone who was relatively new to coding. The style was not a mixture of various coders with different levels of experience. It was not a team that worked on bitcoin but a single person.

On top of this, anyone who was there in the early days knows for a fact Satoshi did not welcome help in coding bitcoin. He just wasn't open to input or welcoming to other peoples code snippets. He didn't begin welcoming coding help and coding feedback really until about 15 months after after it launched. This was after moving away from the sourceforge forums and even then it was a couple months after that.

The first year plus outside of reporting bugs and making feature suggestions, Satoshi was not open to being helped.

Why do I mention this? Because the claim on this website seems to paint a different reality - a reality that just wasn't real. It's something subtle most people wouldn't know unless they were there at the time.

Quite often, the other developers who I involved in the initial stages worked only on certain sections of the developmental phase, not knowing the full picture.  This often meant I had to be very assertive in my dealings with the developers without revealing too much to any one of them.

Anyone who was actually around at the time would have known without a doubt that there were no other developers and certainly not different developers working on various aspects without knowing the full picture. This is a claim that would only have been made by someone looking back trying to put pieces of the puzzle together. There is nothing about that claim that is remotely how things actually went down.

Even if it were to be believed, this would mean that Satoshi would have been going back and re-writing all the code in his own semi-amateurish style because as I already pointed out, the original code is most certainly developed by the same person and they were not a codign expert so this statement just doesn't add up.

Now lets move on to my final piece of all this - the concept of decentralization vs centralization. Satoshi never claimed to hate banks or bankers - what he hated was the centralized control over things. Countless quotes can be found about his distrust in a centralization of things. Here are just a couple.

However this new Satoshi apparently wants us to all believe he had a change of heart. Our only assumption as to why this is the case is that he is about to reveal a project that is completely centralized, which defy's everything Satoshi ever said. This is what the new claim says by whoever this person is that is claiming to be Satoshi.

To me this whole thing is written by someone who is attempting to put pieces of a jigsaw puzzle together to get others to believe them all while missing a few big pieces of that puzzle because they were not actually around at the time. All of this just smells of an attempt at a publicity stunt that I am most assured will completely fail.

In my opinion "James Bilal Khalid Caan", the person claiming they are the real Satoshi, is nothing more than a real fraudster about to reveal their cooked up idea of a centralized blockchain currency project. I doubt many people will put faith into his claims and will likely avoid his project because of this stunt.