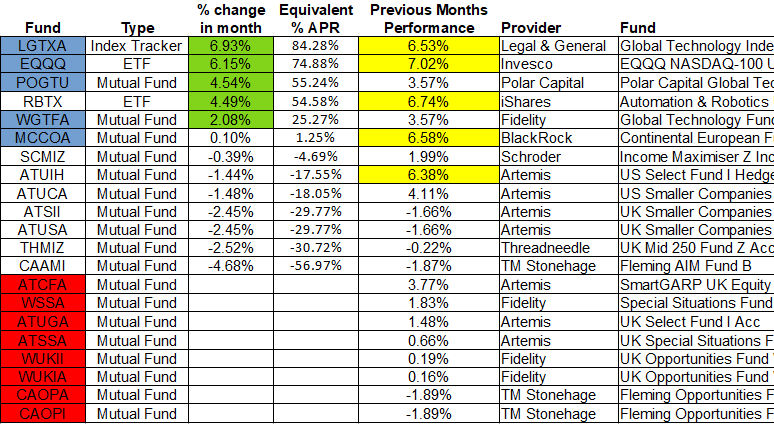 One of my main means on investment is via ETFs, funds and index trackers with the Fidelity Platform (in the UK).  The following table presents the performance of the funds I held during the month of November (sorted in order of performance over the month):

- Those highlighted in red are the funds I decided to sell and take profit on during November as they have not performed as strongly as I would have liked since first purchase compared to other funds I hold - although they all have made a profit.

The following table shows the funds sorted by total change since I've held them, along with the number of days held.

The following table shows the performance of the FTSE100 and S&P500 over the month to provide some additional context:

Overall I did make a gain in November, but as can be seen above, the stock markets didnt do great, and the funds I have had mixed performance.   So making a gain was good in my book, and I'm hoping for a better run over Dec, but so far Omicron has had an impact.

EQQQ shows a strong performance in the month again, and now also appears in my top 5 performing funds to date, which is quite impressive seeing as I only bought into it in September (as per above I'd only held it for 68 days by the 1st of Dec).  If it keeps going at a similar rate, I'll be pretty happy.

The other fund in the top 5 for November, RBTX is another ETF I purchased quite recently and is doing quite well.

I'll continue to hold all of my existing funds  - the ones I dumped during November should make quite an impact, noting that I reinvested the proceeds from those into LGTXA, WGTFA, ATUCA and SCMIZ.

I'm struggling to see past LGTXA, as it just consistently performs the best of all of my funds, and I keep investing more into it as a result.  I'll need to keep an eye on how much I have in it as I dont want to be over-exposed to one fund.  It currently makes up 21.5% of my portfolio which is probably enough for the moment.  I also like the fact that as a tracker it also has low fees which is an added bonus.

Although a poor performer generally I'll hold onto SCMIZ.  It's strength lies in good paid dividends every quarter (~7% APR).  Fidelity takes a small management fee each month (its quite reasonable actually) and the lump of SCMIZ I hold will pay me enough cash dividends to pay those fees each month.  However, I'm considering adding more at my next investment date (when I have some spare cash - probably in Feb now) - the dividends are so good that I'll be able to use that to purchase more stock.

After that, the next fund I'll probably add more to will be EQQQ - as long as it keeps performing the way it has, then it will be a strong candidate for further investment.

I hope this was useful - I'm always looking for tips on good funds and ETFs with Fidelity UK - so if you have any please drop them in the comments.

Investing with Fidelity International - this link might be for those based in the UK only.

I invest using the Fidelity investment platform. IN particular I invest in Mutual Funds and ETFs. I'll report on progress and findings here.