Hamster Coin is a BSC Token with a supply volume in the quadrillions that peaked during the October altcoin season and has been dropping and middling since then. It conforms to the meme-coin multiverse and has a dubious-looking slideshow for a whitepaper.

They're not trying too hard, but it's fine because this could be the one that shoots for the moon, and whether it does that or not has very little to do with its properties.

On April 9, Elon Musk jokingly responded to a tweet about the Giga Texas Factory. HAM shot up 87.23%. The market cap reached $20 Million at one point. It jumped up to rank 800 on coinmarketcap.

By no means this isn't the highest HAM has been, but that was during the bull run when everything was pumping. This was in reaction to a tweet.

And here's the thing.

While Elon Musk is criticized for the way he uses his platform to engage with tokens like DOGE, and crypto in general, for once this one has very little to do with him. This is entirely community-powered. It would be egregious to call the users behind this HAM's community because Hamster doesn't have a dedicated community. A glance through the member lists of the social platforms it exists on is enough to show that it shares almost all its members with other similar tokens.

All of them low-effort, interchangeable, waiting for the runaway reaction of speculation to set them off.

And all of them are very self-aware. 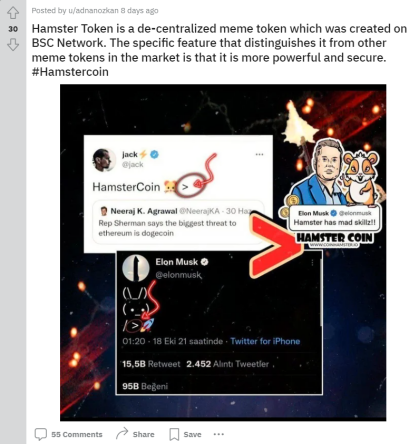 Speculation is the purchase of an asset in hopes that it will become more valuable in the near future. There is little attention paid to the inherent values of a project. Speculators only care about price movement, ready to pull out or put in at the correct signs, whatever those are.

It dominates the wild west of cryptocurrency, but it also manifests in strange ways since this is a realm where the average person can hack together an 'asset' in about 10 minutes and release it into the sphere.

Meme coins don't pump because of direct speculation. There are hundreds of thousands of them, which makes it hard to tell them apart. Meme coins pump because the speculation around them itself is being speculated on. Everyone is watching each other to see what new token is going to become the one.

All it takes is a spark, like say a stray tweet, and it is a runaway reaction where people speculating drives other people to speculate until eventually, it becomes a race to leave first.

Winners pull out and whoever left dusts themselves off and goes to seek out other projects to 'make this money back', always with an ear kept out.

And all of this is without even introducing malicious intent from the developing team into this. Without considering the circles of insider knowledge and the circles of allegedly recruiting people into schemes by convincing them they're on the inside.

Are these elements present in HAM? Probably? But I wouldn't know since I do not participate in that community. The reason I was intrigued enough to write this up in the first place is how blindsided I was after looking it up and seeing a couple of users hyping each other up like there was no tomorrow. It makes one curious what the next runaway reaction will be.

I'm a developer who is skeptical but curious about the promises web3 is making in a global and local context. My content will be varied with a focus on the impact of DeFi on emerging markets, and simple how-to guides for web3 basics.

Passing observations of happenings in the Web3 and DeFi sphere from the ridiculous to the thoughtful.