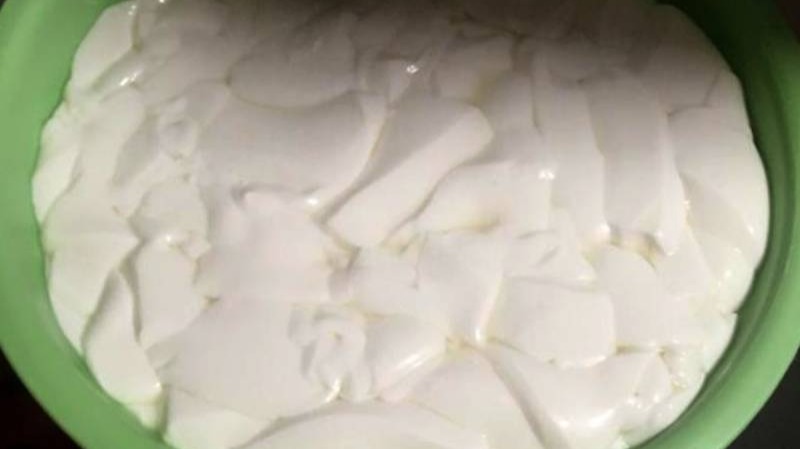 Curd is the first step in making cheese and is formed because the structure of casein (milk protein) coagulates with acidity and when it coagulates it separates from the liquid part of milk. Here we explain the different ways to acidify milk and what happens in each process.

The  enzymes  are the "cutting and pasting" of nature; a kind of bricklayers who transform the elements to make all kinds of changes in the molecular structures.

On a practical level, the  most common methods for curdling milk  are:

The  liquid pharmacy rennet  has given us better results than the powdered pharmacy rennet and  kefir  is highly recommended since it transforms milk into two products: into a drink and into cheese. You can flavor the cheese as you want and with the kefried milk you can drink it, make flavored shakes and use it in your desserts as if it were yogurt.

Vegetable rennet, lemon and vinegar have not yet been tried.

We already understand that milk curdles when the structure of its protein changes, either by fermentation that produces lactic acid, acidification with other acids or enzymatic action.

We have started by explaining lactic fermentation, which occurs spontaneously or induced in milk when it is subjected to temperature and time. In the process of  lactic acid fermentation  the  lactic acid bacteria present in milk and also called  lactobacillus,  feeding the milk sugar, called lactose, and the feed convert lactose into lactic acid, so that during the increasing fermentation concentration acid in milk and decreases sugar.

Cheese is less sweet and more digestive than milk, since during lactic fermentation it loses lactose (milk sugar).

The  rennet from the animal and the liquid rennet from the pharmacy  also contain those microorganisms that acidify the milk through lactic acid fermentation, and the milk protein, called casein, coagulates when the pH of the milk reaches a pH of 4 , 6, therefore at an acidic pH.

In addition to this  acid coagulation , natural rennet and pharmacy liquid contain enzymes that, as we will see, also make casein coagulate by  enzymatic action .

The  mixed coagulation  is just that, when the curd is formed by both processes at once: on the one hand by the acidification of milk, in this case produced as a result of fermentation generated naturally by acidolácticos microorganisms, and secondly by the action of the enzymes naturally present in the rumen.

When casein (milk protein) coagulates, either by the action of acid or by enzymes, most of the solid substances in milk bind together with it and thus the curd is formed.

When casein coagulation is carried out solely by the action of acids,  a brittle and demineralized curd is formed , since in the case of acid coagulation, calcium is carried away by the serum. This process is called acid coagulation because the structure of the milk protein changes only because of the acidity of its environment: the milk.

When we  curdle the milk by adding lemon juice (citric acid) or vinegar (acetic acid)  we are producing an acid coagulation: By adding the acid to the milk, it becomes acidic and the casein coagulates due to being in an acidic environment, without the need for any fermentation, so the curd still has the lactose intact.

Cheeses curdled by acid coagulation generate a brittle curd, without rigidity or compactness and which breaks easily, so they will be eaten fresh. In acid coagulation the minerals move towards the serum, so the cheeses will be demineralized. In the case of curdling them by adding external acids (citric or acetic) instead of producing the acids by fermentation of milk (lactic), the curds will keep the lactose intact, since there will not have been a fermentation process that converts the lactose into lactic acid.

If we want to make  cheese with lactose-free milk , we can use lemon or vinegar, since its acid will coagulate the milk protein without the need to ferment the milk sugar (lactose).

On the other hand, natural rennet contains enzymes that coagulate casein in another way and with different results. The  chymosin and pepsin  are specific enzymes that curdle milk and found in the rumen and stomach of animals, with the function of forming cheese milk entering our stomach and make it more digestible as well.

Thus, globes of fat are  formed that contain most of the solid substances in milk and that bind together through calcium bridges . Being fatty (lipid), they separate more intensely from the water-soluble parts of milk, like a drop of oil in a glass of water.

Enzymatic coagulation occurs when using the rennet powder from the pharmacy or the various vegetable rennet that contain enzymes that act on casein, in this case they do not acidify the medium and act without fermentation.

The  plant curds  contain other various enzymes chymosin and pepsin, but also have the ability to coagulate milk through enzymatic coagulation.

At this point, the acidity of the medium also helps, since it gradually contracts this network of fatty solids that has been formed by enzymatic action and when it contracts it expels more and more of the whey, which is why  mixed coagulation , caused Due to enzymatic factors and acidification, it  forms solid and strong curds that drain more easily .

Therefore, the acidity produced in the lactic fermentation of the microorganisms in the milk, together with the activity of the enzymes naturally contained in the rennet, are the factors that  "make the cheese" , completely transforming the structure of the protein. of milk to divide the solid part from the liquid part that it contains contains most of its water-soluble compounds.

As we have already seen, we are going to review the 3 techniques to curdle milk:

The curd made with natural rennet or with the liquid version of the pharmacy rennet curdles the milk by mixed coagulation, so the curd is stronger, contains the minerals of milk and has a greater ability to become a mature cheese.