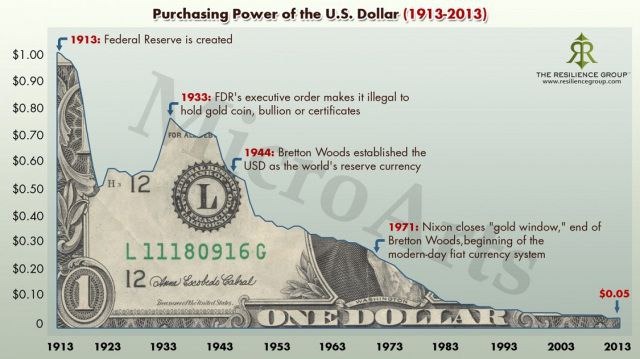 Bitcoin won 50 years ago; FUDists time to turn your attention to USD

FUDists: time to turn your attention to the USD.

The flowery stage for Bitcoin and Crypto's grand adoption was set 50-years ago, as Nixon's pen dug the dollar's grave.

August 15, 1971, Nixon took dollar off the gold standard. That day, savers and workers couldn't divorce the dollar. Today, they can. This and more interesting information in today's post in commemoration of the last 50 years.

Not to be dramatic, but what happened in 1971? Well, Nixon closed the "gold window", ending the Bretton Woods agreement, and essentially bringing an end to fixed exchange rates.

Let's see the fallout, on factual grounds. Here's the data and statistics hard to ignore. 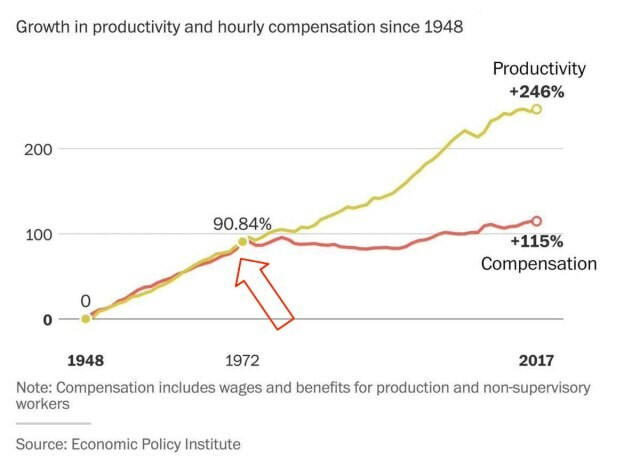 This first graph is nice and easy to understand, and yet nevertheless shocking. Given 1948 as a natural reference point (post-depression recovery), compensation grew proportionally to productivity. After the end of Bretton Woods, productivity continued it's upward trajectory whilst compensation stagnated.

Let's try to see things positively for dollar-savers for a second. What can explain the divergence between productivity and compensation? Baring in mind that this has to do with the productivity of each individual worker, one may approach the defence by saying that the recent explosion in technology, including the use of computers and internet, would seem to explain the divergence.

On a second look however, it should become obvious that the growth remained linear in productivity and fits the Econometrician's regression model from '48-'72. In other words, there were no unique developments in productivity in the 70's, 80's and after that, that can be attributed to the divergence. The underlying factors remained relatively stable to maintain the linear trajectory.

So what did change? It was the variables and factors underlying compensation. In other words, the means through which workers were compensated dropped and this includes both benefits and wages. 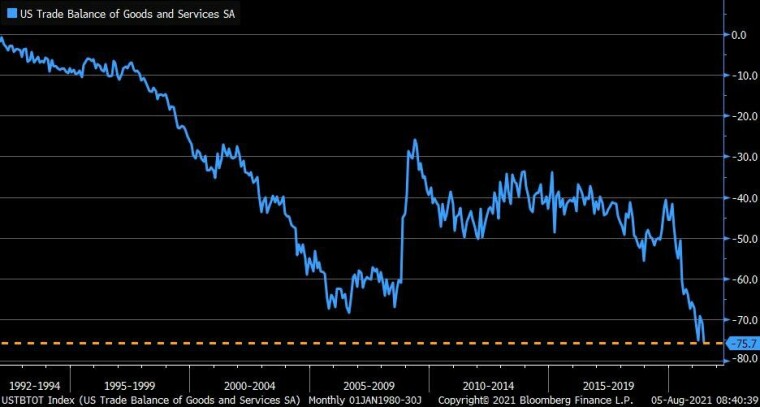 Just this June, the trade deficit should have made headlines as it widened to a record $75.7 billion smashing through the expected $74.3 billion as well as the prior month's $71 billion.

The theory of Economics states that under a floating exchange rate regime, essentially what prevails after the end of Bretton Woods, a trade deficit can be facilitated and rectified through devaluations of the currency.

This of course, is not very good for savers as it means that each dollar in their bank account is worth less, and can buy them less goods or services. This is a deterioration in the purchasing power.

Why on earth then, one may ask, are dollar-savers both losing purchasing power (see (3)) whilst the economy keeps going deeper into trade deficit? 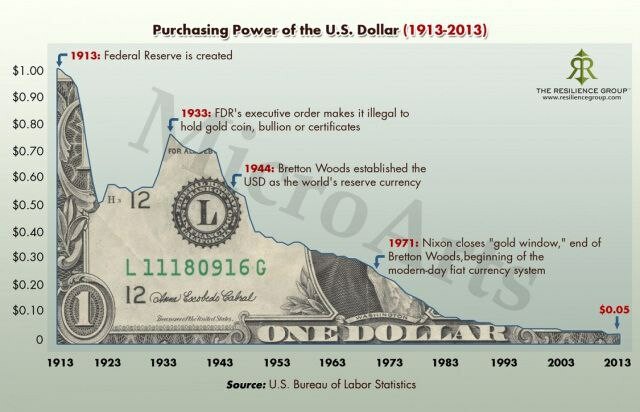 Purchasing power is a very interesting measure as usually, with the inflationary loss of purchasing power, there is an expected compensation in nominal wages (your wage goes up by the same you expect inflation to go up).

But what if it doesn't?

That's right! As an economist I can tell you all that inflation measures are just as arbitrary as anything else. The common way to estimate it is CPI which is the consumer price index. Essentially, there is a given basket of common goods (your eggs, bread amongst other common groceries...) that is indexed and the price rise measured. This rise in price is called inflation through the CPI measure.

Surely, inflation should be measured by what most people spend their money on? Unfortunately that is the tricky part due to diverse spending patterns that exist over an entire population. Yet, there are measures better than CPI existing already for sure. I refer you to the Chapwood Index, designed to measure the top 500 items Americans in each state actually spend their after-tax dollars on:

"The Chapwood Index reflects the true cost-of-living increase in America. Updated and released twice a year, it reports the unadjusted actual cost and price fluctuation of the top 500 items on which Americans spend their after-tax dollars in the 50 largest cities in the nation.

It exposes why middle-class Americans — salaried workers who are given routine pay hikes and retirees who depend on annual increases in their corporate pension and Social Security payments — can’t maintain their standard of living. Plainly and simply, the Index shows that their income can’t keep up with their expenses, and it explains why they increasingly have to turn to the government for entitlements to bail them out.

It’s because salary and benefit increases are pegged to the Consumer Price Index (CPI), which for more than a century has purported to reflect the fluctuation in prices for a typical “basket of goods” in American cities — but which actually hasn’t done that for more than 30 years." -(Chapwood Index, N.D).

Whilst bankers and the government have been telling you that the CPI has been at a stable approximate 2%, here is the actual data collected by the Chapwood index.

That's right, whilst you thought you were keeping your potential living standards fairly stable, you've been losing as much as 6-8%. Every. Year.

Do you really think the majority of dollars spent in the economy go towards Eggs and Bread? Sure, if your circumstances are such, your majority may be going to these things but the majority of dollar's spent in the economy are on more expensive assets such as real estate and commodities such as gold which constantly make up the backbone of Banker's and the ultra-elite's portfolios. They do not need to worry about your eggs and bread, and as long as they keep you thinking about just those things, they can engage in this daylight robbery.

Those assets, which are truly inflating, getting further and further away from the reaches of the ordinary worker, including Bitcoin, are hidden from the public's eyes. After all, how many times have you come across other Economists' reports on the wild deterioration in Millennial's perspectives compared to their predecessors? The situation they represent is closer to this: 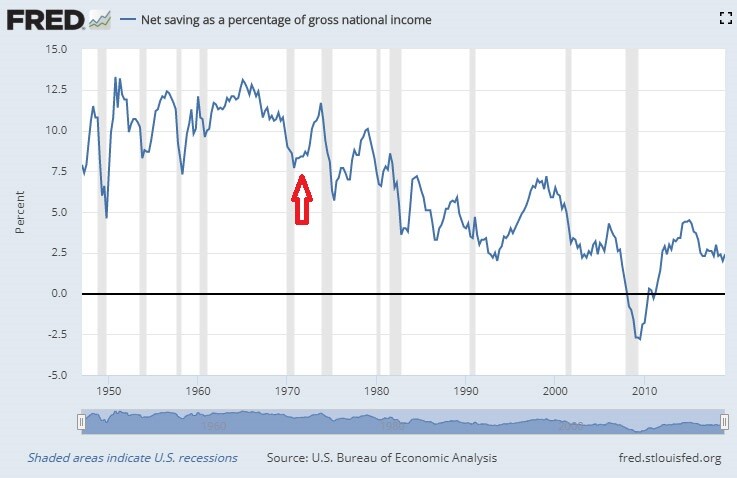 There is a very evident downtrend in net saving and no wonder millennial's today find themselves in this predicament.

Wake up, this is daylight robbery.

Not only will you be better off with a store of value such as crypto, which is decentralised where central banks have no authority to eat into your wealth (and perhaps the source of many Banker's frustration), but you will also gain the benefits of being an early adopter.

The dollar is the lie and ponzi scheme, not Crypto. Once they realised that, they wanted to hop on board.

It's only recently that investment banks have added this to their potential assets for investors as they realise they've lost. The dollar has tanked and they can no longer enslave the average worker's productivity. 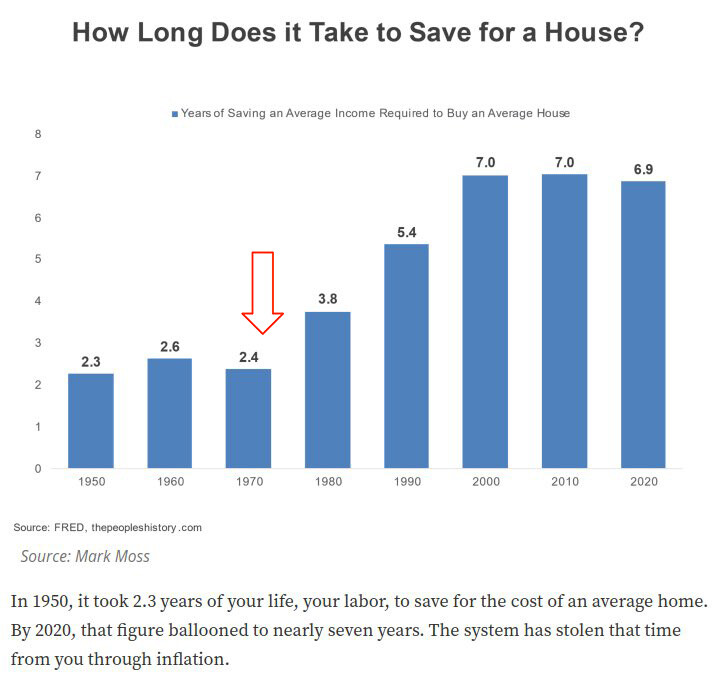 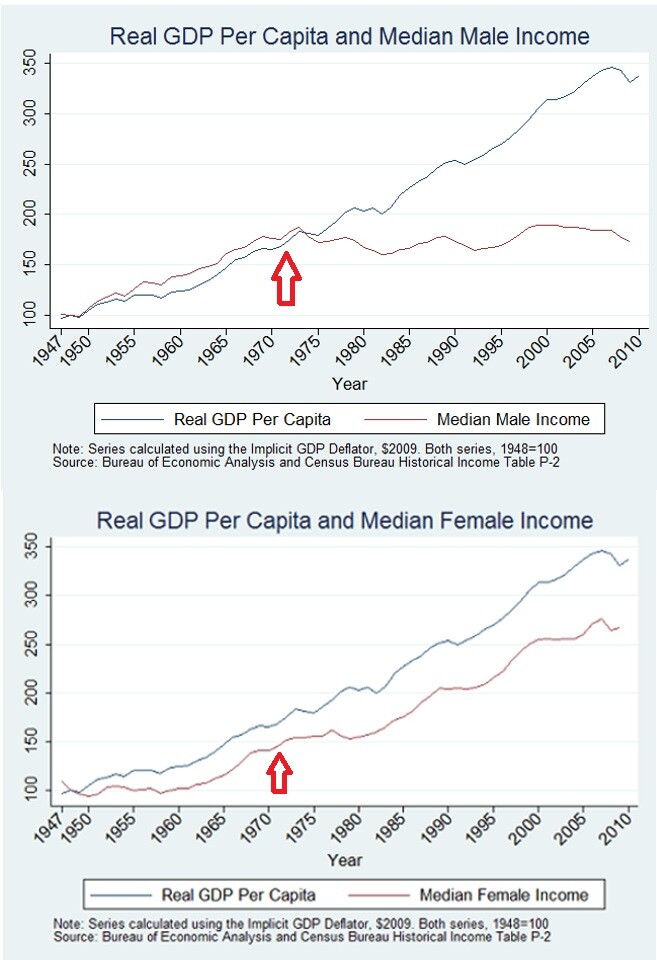 We're talking about a real problem in real terms.

It's time to stop being sheep. The financial revolution is here. I hope you found this post informative <3 Make sure to give me a follow.

This is an Economist's blog to share his perspective on global and historical developments. Though deemed a pseudo-science by many, it is the discipline I've married and helps explain the world in more than one way.