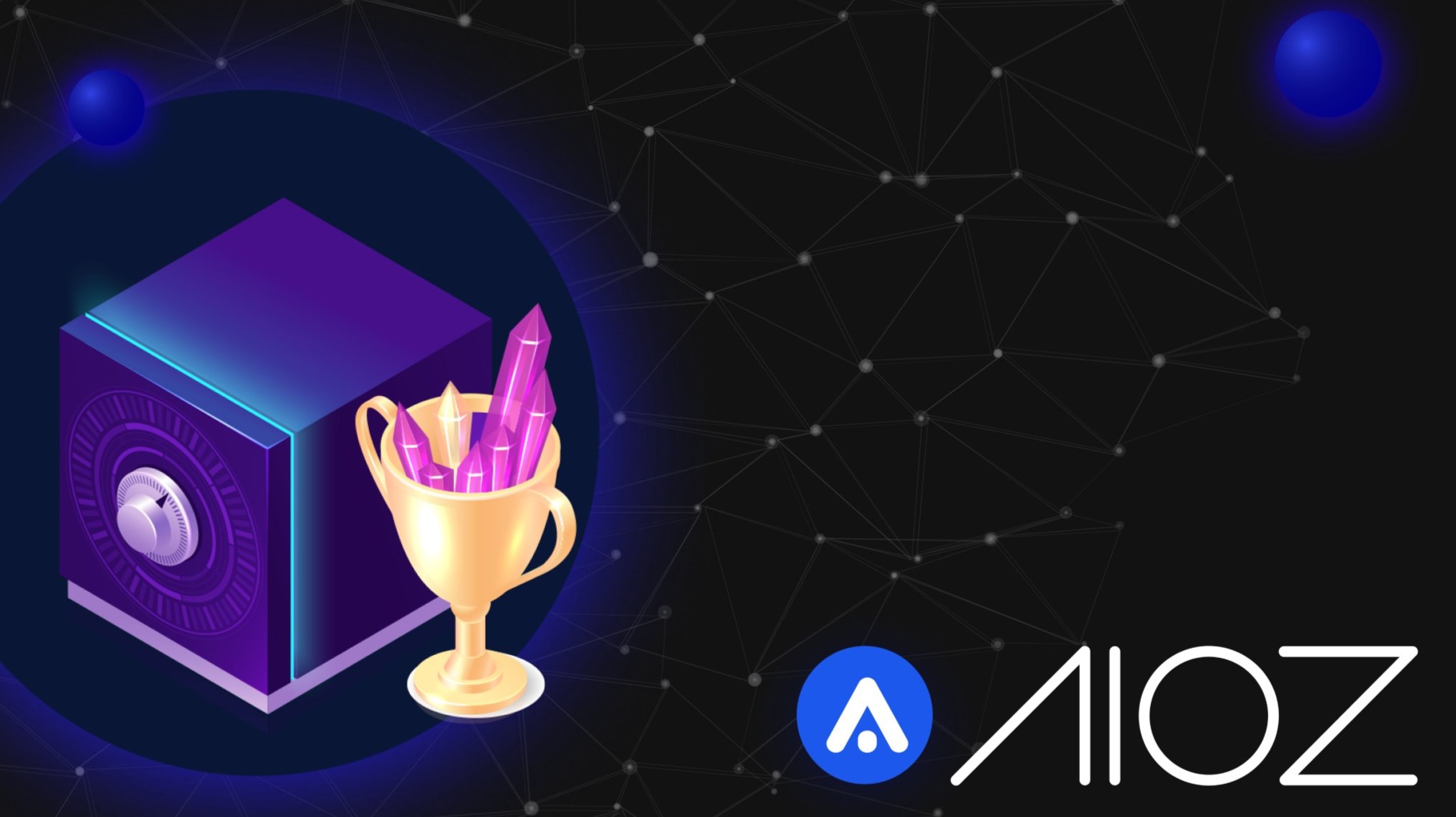 CryptoDiffer lists $AIOZ as #4 greatest ROI for tokens released since March. Should you care?

TL;DR I think you should.

I've been following since early March and I have seen a wide array of changes, not just from the team pushing out updates to the node and their AIOZ tube platform, but an evolution in the AIOZ tube community at large. dCDN provides utility cases that mainstream folks can behind that will bring them into crypto because people like earning money and they like being entertained and they like a sense of agency in the exchange for their time and faithful addiction to the dripfeed of digital ecstasy.

I am subscribed to their Medium (https://medium.com/@aiozadmin), I followed them on twitter (https://twitter.com/AIOZNetwork) and have since exited that shady platform, I read any articles about them I can still and I still check out their tweets. I am more or less on cruise control now with my Theta Edge Node and I broadcast sometimes, mostly movies and tv shows I like, so AIOZ is an interesting related project that I'm taking part in as well. AIOZ, the token, the AIOZ Testnet Node and the Aioz.Tube experience in general seems to be changing faster than Theta Edge Node and Theta.Tv though, so my interest has been piqued, especially today with this recent announcement of AIOZ's on twitter. 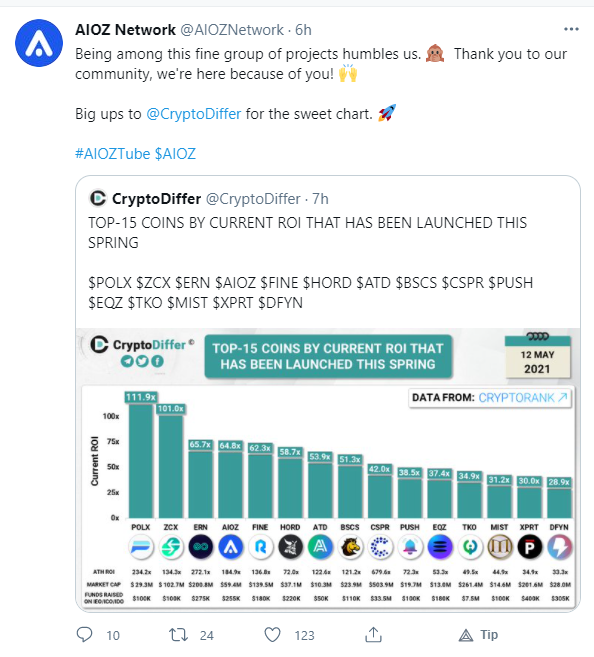 Top 15 ROI for coins launch since March/Spring. HODL? How many of those coins to you recognize?

I am a fan of decentralized streaming and content hosting, and I don't care that much admitting it's okay to me if it's pirated content. Youtubers getting pirated should take note of dCDN and jump ship from those corporations centralizing all the data right now, hurting creators, communities and even communication in general with censorship, terrifying betrayal of user rights, and now political bias! Take the muzzles off I say, sail the high seas! Research dCDN folks - it's coming and it's going to be a large one. 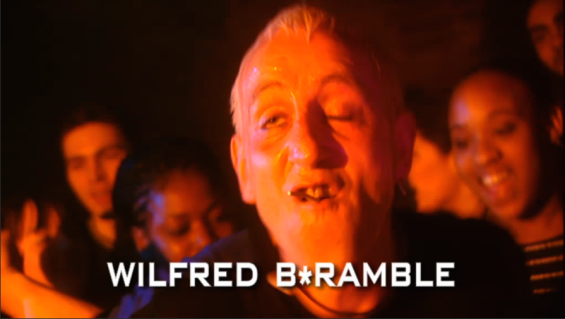 OI OI! This party is still a large one, bullrunnin' mon

Have you checked out Aioz Tube? It's...not great at the moment but it's improving. It's full of copies of Youtube videos, pirated content, and there doesn't seem to be more than 4 dedicated actual streamers on the platform that I'd recognize from elsewhere who are testing it out. Here I think theta.tv has Aioz.Tube beat severely. There is just way more quality, curated content on Theta.Tv at the moment but the Theta.Tv community is VERY raw still about how tfuel rewards have basically been wiped out for sharing traffic. I've watched content, quality content most of the time admittedly, on theta.tv and not gotten any tfuel rewards. On Aioz.Tube, you'll earn some modicum of AIOZ token but I honestly haven't watched anything on AIOZ tube in 2 months. I'm keeping my eye on this project though like a hawk. I see big things in the future. 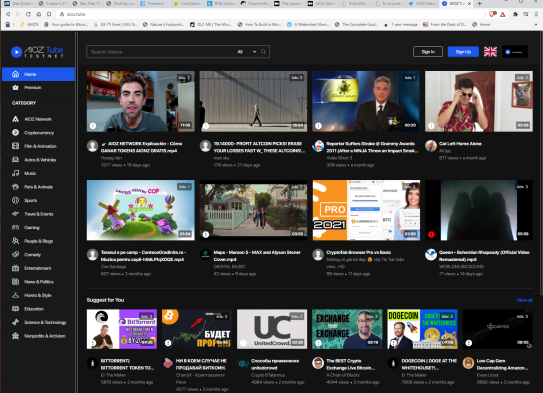 I have noticed there are more OG streamers coming to the platform in the past two months I've been running my testnet node on AIOZ and watching content, however. It was a pleasant surprise seeing a face I recognize from YouTube with his own channel appearing on Aioz.tube now. Cool! 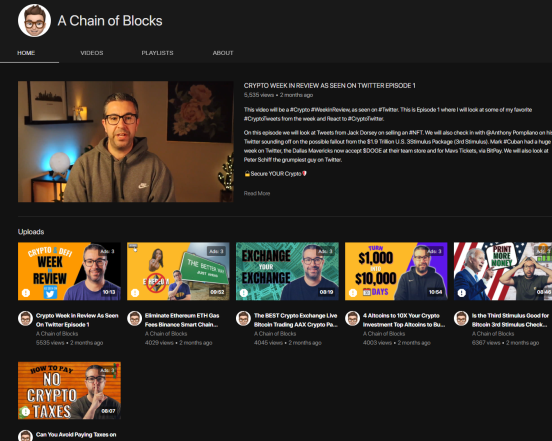 I am intrigued to see what the future holds for Aioz.Tube and for the Aioz Node. Competition is always good and I want to see dCDNs compete for greatness. Have you looked into the AIOZ project or dCDN in general? What other projects in dCDN intrigue you and why? dCDN is fascinating to me, almost just as much as projects like Helium's with decentralized telecommunications.

Let's take a second to pull our heads out of asses, sound good?