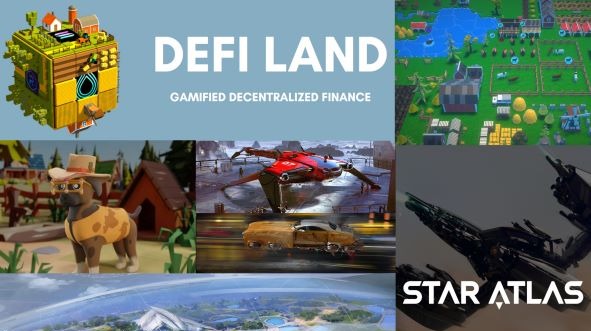 I started playing around on the Solana blockchain over a year ago, and I quickly realized that gaming could be one of (if not it’s best) use-case. The low costs, speed and developer-friendly formatting make Solana a great place for the future of crypto and P2E gaming.

For these reasons, there are probably more legitimate gaming/metaverse projects than you think. It’s really to easy to fall into a rabbit hole looking into them all, but I eventually landed on two of them to follow/support into the future: Star Atlas and DeFi Land.

In my opinion, these projects provide two very different options for risk-tolerant investors and gamers. They operate on very different models/timeframes, but both are well-funded with experienced leadership teams and enormous upside potential.

Out of all the P2E/metaverse projects I’ve reviewed over the past year, Star Atlas has the most exciting game design and artwork. Everything they’ve released has been impressive from a gaming perspective in my opinion, and their vision is unmatched from what I’ve seen.

If you asked me to describe Star Atlas in one word, that word would be “ambitious.” The product that they’ve leaked over the past year will be an absolute game-changer in the industry… if they can truly pull it off. From what they’ve released so far though, the future seems pretty bright.

So far, the Star Atlas team has pulled off a detailed pre-launch rewards system, a beautiful marketplace and UI with impressive NFT-based model, three “factions” to choose from, and a unique “staking” system that’s actually interesting to interact with.

Check out play.staratlas.com to see what I’m talking about!

I’ve loved almost everything this project has released, and I think they’ve laid a great foundation for the game so far. You can own ships, structures (airdropped through original “Rebirth” event, coming to marketplace soon), resources, collectibles, and access badges.

Star Atlas has also released a very interesting “staking” model with a unique UI. It allows you to “enlist” the ships you own into the “Faction Fleet” which will then allow you to earn $ATLAS for those ships. After enlisting, you have to use resources (fuel, food, toolkits, and ammunition) to keep your fleets supplied and producing rewards. This system utilizes the speed and efficiency of Solana to perform higher-level functions without complicating things at the user level. It actually “feels” like a game, not just another group of smart-contracts with a flimsy frontend.

There are two different tokens in the Star Atlas ecosystem: $ATLAS and $POLIS.

The $ATLAS token serves as the currency of the marketplace and the future gaming ecosystem, while the $POLIS token acts as the governance token for the project. The tokens have very different tokenomics and use-cases, so I would recommend researching both thoroughly before investing.

You can find both tokens on CoinGecko through the links below:

As with any project of this size/scale, Star Atlas has plenty of doubters. Some claim that it is nothing but an elaborate scam that will never produce on it’s promises, and to be fair, that is always a possibility. It’s definitely possible, especially considering the enormous ambition behind this project, that the true product never makes it to full release.

My personal argument is that scam claims can be made about almost every metaverse/gaming project out there, and Star Atlas has actually released more than most to this point.

The solid and quickly-growing community behind the project also provides some level of assurance in a market full of boom-or-bust ideas. You can already find well-established third-party alliances planning for the game’s future. Personally, I’m part of the Interstellar Alliance as future racer, and I’m an investor in the alliance’s DAO (SAIADao) that utilizes its funding pool to obtain and earn yield on gaming assets.

For those looking to invest/support Star Atlas, just make sure you DYOR and that you understand the inherent risks that come with an extremely ambitious project with no final product. The upside is HUGE, but if we’re all honest with ourselves, it’s still a real possibility that the true game never makes it past data (or at least not in time to be competitive in the marketplace).

Town Star from Gala Games became one of the earliest P2E crypto projects to achieve major success in Q4 of 2021. This project, originally built on Ethereum, changed the lives of thousands of early adopters, including a few of my friends, last November.

Although I was forced to watch from the sidelines this time, the success of the project stood as an example for what I believe can happen many times over the next 2-3 years. Town Star did a lot of good things, but there is still so much to improve on, and so much more money to be captured.

I believe DeFi Land could be the next big step towards eventually adopting the masses into the P2E world. The project leverages the powers of Solana to improve upon the old “Farm Town” idea.

At the time of writing this article, the DeFi land announced an interesting hybrid system to avoid Solana’s recent issues by storing ownership data on-chain and providing gameplay without depending on the blockchain at all times.

This will obviously cause a set-back to the upcoming P2E release, but this project is about producing results, and this decision reflects that overall strategy. They are now shooting for May 16th, 2022 to release “DeFi Land Play and Earn.”

In beta, you can already see how much more DeFi Land can offer with Solana’s speed and efficiency. They’ve been able to produce a nice array of initial game features including yield farming, staking and basic side-games like shooting, card-matching and fishing. The potential here seems to be wide open.

Considering the recent decision to rebuild with new mechanics, we will need to stay tuned for more development here!

The $DFL token covers all needs within the DeFi Land ecosystem. Although it is not required to access most current game features, it serves as a major part of the game’s yield farming mechanism. You can also stake the token through the “Bank” found in the main beta, or at staking.defiland.app.

The most exciting and impressive releases so far, in my opinion, are the DeFi Land Seeds and Gen-0 NFTs. Through a “watering” mechanisms, users were able to burn $DFL in return for better odds at rare Gen-0 NFTs. I personally found this to be a fun and practical way of airdropping these future P2E NFTs to early adopters.

You can still buy the seeds and Gen-0 NFTs on Magic Eden here:

I’m personally excited to see how these Gen-0 NFTs will function in the game’s P2E structure. These include many different kinds/rarities of guns, fishing rods, harvesters, chickens, ducks, cows, cats, and dogs that will play a major role in the future of DeFi Land.

Just like Star Atlas, DeFi Land obviously has its’ critics. I won’t go into the full criticisms here, but if you take a truly unbiased look at the project, it’s not without its own set of major challenges and potential downfalls.

I know from my own experience that the beta hasn’t always performed perfectly, but the team seems to have a very solid grasp on the challenge of scaling. They’ve also been impressive from a productivity standpoint since I joined in support of the project.

The biggest question mark now is obviously the recent decision to move gaming activities off-chain, so I would definitely recommend doing your own thorough research on this development and how the community perceives it. Due to the fact the announcement hit during the writing of this article, I can’t even say I personally support the change. I do, however, believe in the power of the large DeFi Land community with over 100k Twitter followers and a large, active discord server.

Although I personally love and support both of these projects, you can probably find another article that is equally-bullish on others. The best thing about the crypto gaming sector is that you can usually try out the beta and make your own decision on it.

Feel free to come back here and comment about how crazy dumb I am for believing in these projects. As always, I would love to hear from you and discuss the upsides/downfalls of any project you’d like!

I’m an experienced business leader, salesman, marketer and writer that fell in love with blockchain and decentralization. I'm a full-time #crypto #defi #nft #degen now! Find me on Twitter @SayWhenCrypto or on Discord @Doc#3878!

This blog is my way to make new connections and continue my education in blockchain. I believe networking and learning is the key to success here. Follow and DM me on Twitter @SayWhenCrypto or on Discord @ Doc#3878 so we can help each other in the future! If you’d like, you can also subscribe to my Substack @ docwrites.substack.com!