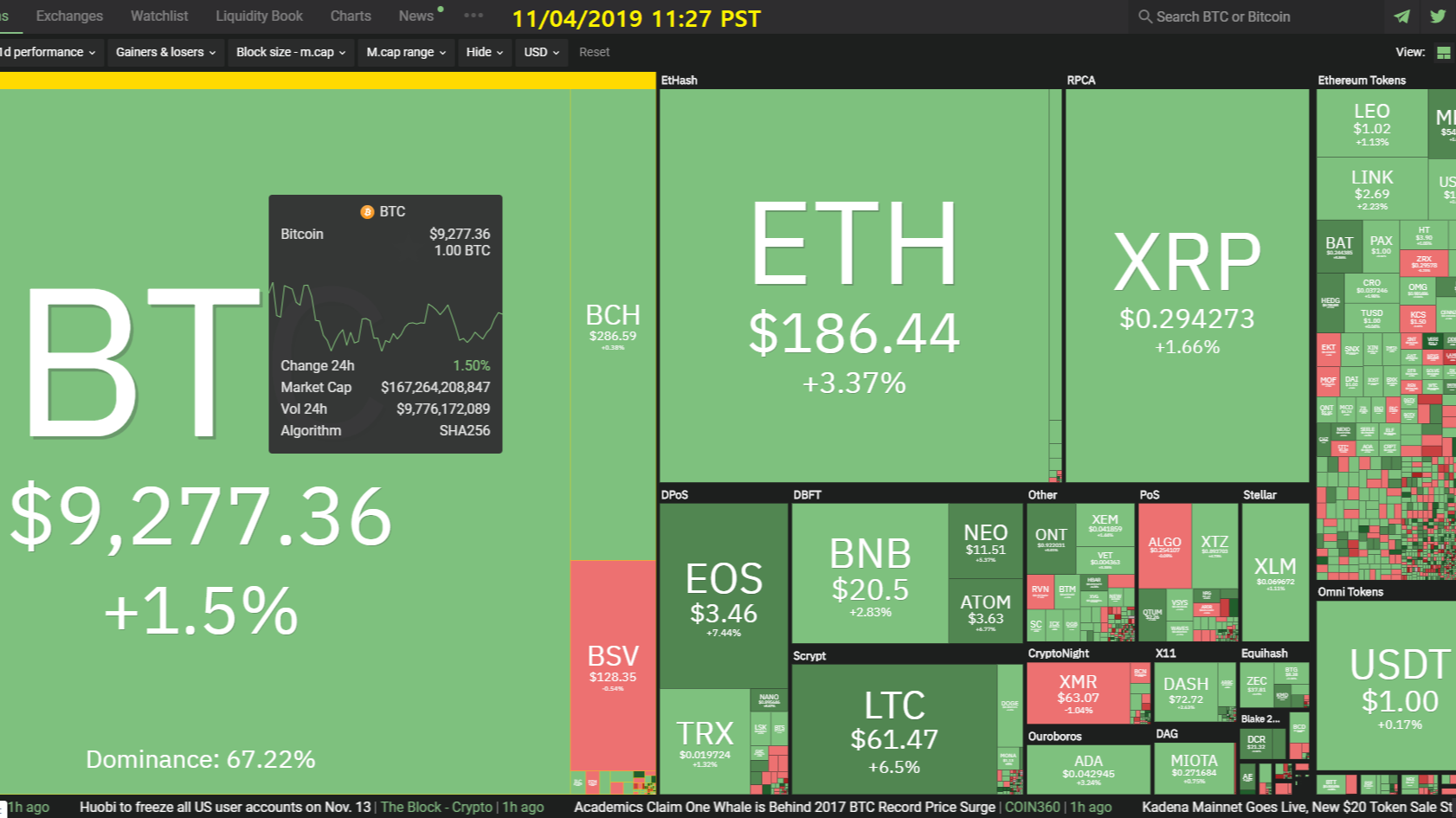 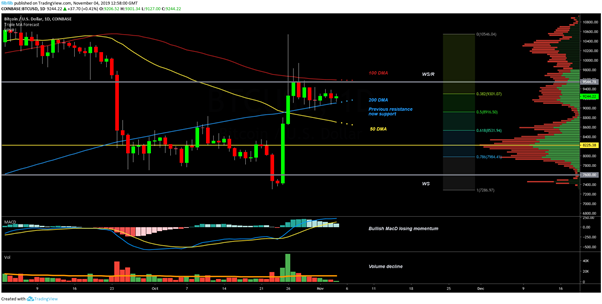 Bitcoin price (BTC) closed the week at $9,207, down 3.66%. Despite a surprisingly low volatility weekend, the bulls helped keep Bitcoin price above $9,000 for 10 days and at the time of writing the price continues to consolidate. So far Monday has brought a move higher to retest $9,300, representing a 1% gain. EOS (EOS) and Ether (ETH) have had notable gains on the day with EOS trading over $3.50 and Ethereum at $185. The total crypto market cap is $249 billion, with Bitcoin dominance at 67.2%

Bitcoin (BTC) has been range-bound ever since its price jumped by more than 30 percent in one day on Oct. 25. With that in mind, cryptocurrency trader 'Mr. Anderson' expects a bigger price move.

The weekend has brought very little change for Bitcoin: the leading cryptocurrency remained tightly bound around $9,200, but altcoins are finally seeing some more variety. Notable gainers in the top-10 are Litecoin and EOS, at around +5% each, while Cosmos, Decred lead the lower leagues with +8%. Augur is in double-digit territory, with a +16% at the time of writing.

Higher Bitcoin-Ether correlation is not proof of bullish-bearish causation [ambcrypto.com]

According to skew markets, Bitcoin and Ethereum have exhibited a higher correlation over the last two years. Since the beginning of 2018, BTC and ETH have maintained a correlation percentage which is consistently near 90 percent, the market analyst claimed.

New data shows that Monday is the best day of the week to buy and sell bitcoin. Since June of 2014, buying BTC on that specific weekday has led to a compounded daily return of 445%. According to data from cryptoasset data aggregator CryptoCompare, buying and selling bitcoin on Monday would yield the greatest daily return, followed by Friday, which would lead to a daily return of around 250%. Next came Thursday and Saturday at roughly 190% and 150% respectively.

Crypto Under Attack: The Five Worst Hacks That Shook the Crypto World [cryptopost.com]

Cryptocurrency assets are a modern form of investments by many people, as they have moved from traditional investments like real estate and gold. But with the ease of online transactions comes the risk of getting attacked by hackers and malware. It is essential to use proper software that provide two-factor authentication service, such as Google Authenticator, and other services like email verification or IP address tracking.

The Next Bitcoin Bull Run To $16,000 Could Be Ignited By Fed’s Repo Interventions [zycrypto.com]

Last month, more than a few bitcoin enthusiasts were fascinated by the famous 4Chan bitcoin wizard who had called for bitcoin to reach $16,000 in October. The anonymous person made the bold forecast in January amidst bearish market sentiment, along with other price predictions for the price of bitcoin.

On the 16th and 17th of January, 2020, pioneers of the global Bitcoin and blockchain community will converge in Miami for a historical conference, continuing to propel cryptocurrency from niche to mainstream. Now in its seventh year, The North American Bitcoin Conference is the longest-running and most attended finance conference for the Bitcoin, blockchain and cryptocurrency industries with over 20,000 attendees since 2013.

Dot Com Vs Crypto Bubble: A Glimpse Into Human Psychology and The Future of Bitcoin? [newsbtc.com]

All financial markets are cyclical, including the cryptocurrency market. The price action of assets like Bitcoin, Ethereum, and even traditional assets like stocks or commodities, are driven by a complex balance of supply and demand, but also the psychology of each market’s participants. A comparison between the late 1990s and early 2000s dot com era boom and the late 2017 crypto hype bubble show just how similar human psychology playing out in markets can be, and potentially offer a glimpse into Bitcoin’s long-term future.

“Few transformative technologies have captured the public’s interest — and imagination — as quickly as Bitcoin has in just 11 years. Email was invented in 1972 but it took until 1997 for adoption to surpass 10 million people. The television set was invented in 1927 but by the end of the 1940s only 2% of American families owned one.

2 Reasons Why Investor Returns Will Diminish Over the Next Decade [ccn.com]

The U.S. stock market in 2019 climbed even though there was plenty for investors to worry about. A mounting trade dispute between the U.S. and China, coupled with a slowing global economy and boiling geopolitical tensions, behaved like a perfect recipe for a financial disaster. A benchmark indicator even cried fears of a recession, building up a scenario for investors to flee from corporate stocks.

Exchanges captured most of the headlines over the past seven days. In a week of mixed fortunes, BitMEX accidentally exposed email details for the ‘majority’ of its users and Deribit refunded jilted bulls $1.3 million after a flash crash triggered liquidations, while FTX added a new index to capitalize on new-found excitement around Chinese projects, Bakkt’s trading volumes hit new highs, Jack Dorsey invested in CoinList’s new trading platform and Binance expanded into Russia.

Part of the joy in seeing the latest would-be Satoshi Nakamoto revealed as a fraud, is in watching their so-called ‘evidence’ being pulled apart and proven false by experts. Bitcoin Podcaster, Kenn Bosak, however chose a different tack.