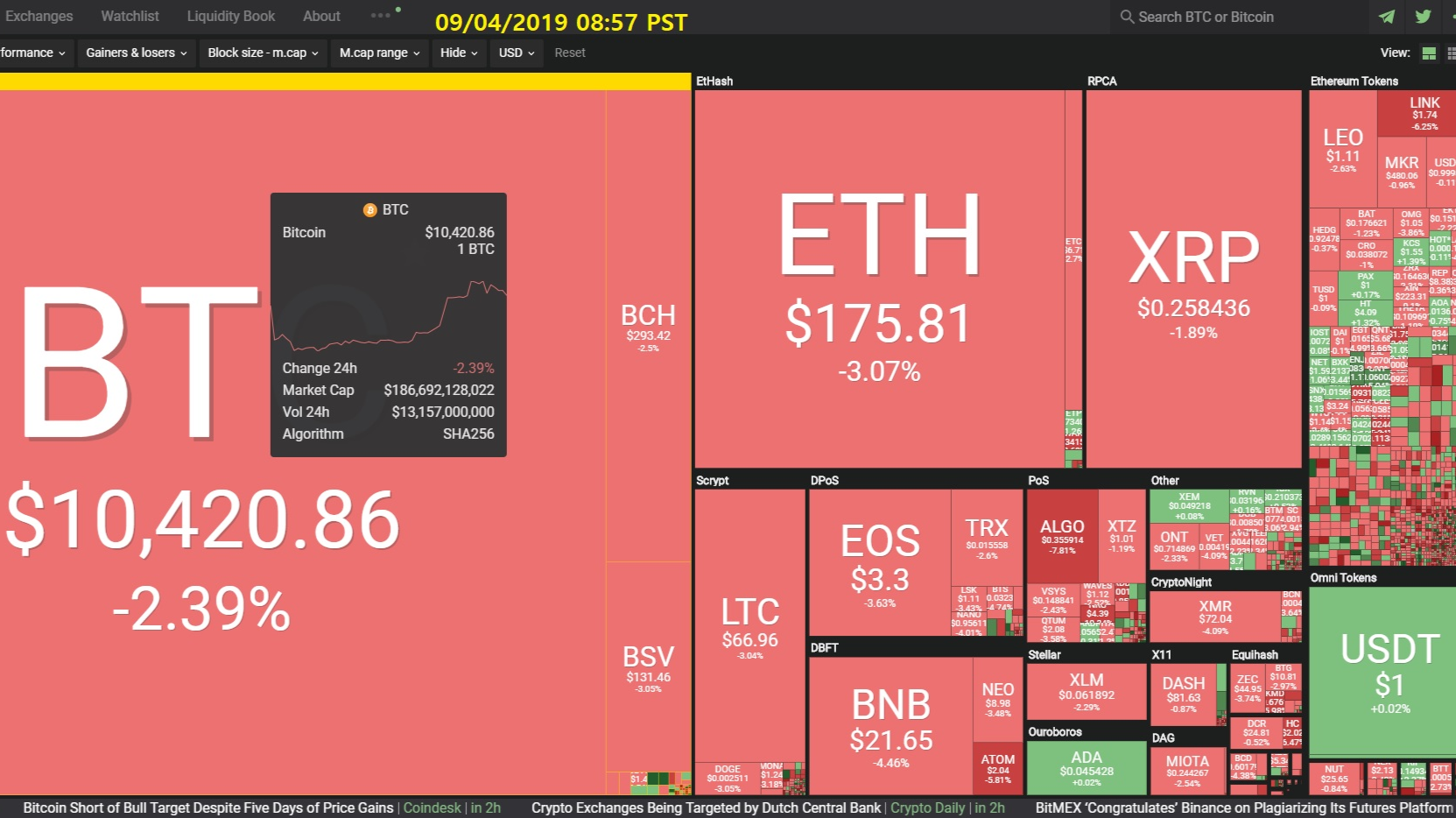 Bitcoin (BTC) showing a 7% drop in the lead up to the CME bitcoin futures expiry date| Source: TradingView

Oddly enough, the opposite of this phenomenon has been noted around the expiration dates of CME bitcoin futures contracts. For example last week, BTC fell dramatically, citing a 7% drop from around $10200 to $9500. While Bitcoin is prone to volatility, this drop was significant in that it lined up with the expiry of the futures contracts.

Binance annoucnes the launch of two Binance Futures Testnet platforms while Facebook has reportedly hired a lobbying firm to start appeasing lawmakers’ concerns regarding its upcoming cryptocurrency Libra, and the ICE’s crypto venture Bakkt is set to open up deposits next week, ahead of the futures trading launch. Over 2,000 XRP investors signed a petition asking Ripple to stop selling its holdings, and the CEO responded. Finally, Craig Wright was ordered to pay 500,000 BTC to the Kleiman estate.

Bitcoin Stalls At $10,400 With A Move Above $11K Needed To Confirm Bullish Revival [zycrypto.com]

This sharp rebound saw the asset climb above the $10,000 psychological position and fundamentals go back to recent highs. Market dominance, for example, has gone back above 70% and at the time of press stands at 70.5%.

The reason for the surge remains indefinite but as we have been reporting, there are a couple of reasons that could be boosting the asset. For many investors, this is not as important as knowing if Bitcoin will continue in the same bullish trend.

The Bitcoin Network hash rate is currently on the path to reaching 90 quintillion hashes per second. Bitcoin’s computing potential has been increasing steadily since a massive decline at the back end of 2018 during the Bitcoin Cash “hash war.” Also, some commentators predict that the BTC price will soon respond positively to increasingly positive developments in the network fundamentals.

Bitcoin touched almost $14,000 back in June and it has since retraced to trading around $10,500. This has caused some to believe that the bullish trend we’ve observed in 2019 is over.

Looking at monthly charts separately, however, reveals interesting information. For every single month since February 2019, Bitcoin has managed to mark a higher low. To be precise, this is how it looks like:

Nevertheless, regulatory roadblocks have kept financial institutions from launching an ETF. The US Securities and Exchange Commission (SEC) expressed its concerns about the underlying spot market, which provides the basis of bitcoin price, based on which an ETF gets settled and cleared. The securities regulator borrows its worries from cases involving price manipulation in the bitcoin market, driven by the so-called whales.

Bitcoin close to being at the base of the financial system in ten years, claims Blockstream’s Samson Mow [ambcrypto.com]

The San Francisco-based blockchain development company took Bitcoin to another level by launching a satellite to broadcast Bitcoin blockchain, while also initiating a transaction recently. The CSO of Blockstream, Samson Mow, expanded upon the necessity of the satellite in a recent interview with Charlie Shrem.

Hourly and weekly charts|BTC is trapped in a falling channel on the hourly chart (above left) and is currently bouncing up from the rising trendline support.

BTC, ETH, XRP Price Analysis — Bulls Are Back Again, But How Long Can They Dominate the Market? [u.today]

ETH/USD chart by TradingView | The leading altcoin is located within the Triangle pattern with an upcoming slight decrease. The blue line of the MACD indicator is about to change the trend from bullish to bearish, confirming the possible decline. Respectively, ETH is about to reach the local bottom at $170 in a few days.

Our recent Bitcoin price forecast did not come true, as bulls pushed the price above $10,000. On the 1D chart, the Sunday green bar of the indicator is much smaller than those observed in July-August. Thus, the current upward correction is not supported by a convincing increase in trading volumes and soon the price of Bitcoin may be in the region of $9,750. On the other hand, breaking the $10,956 mark will open the door to $12,000.

Bitfinex remains one of the most popular crypto exchanges in the world today. All of its services are of great interest to users from all over the globe. In a recent change, the company decided to integrate 100x leverage for top cryptocurrencies. This move coincides with Binance recently releasing margin trading as well. Crypto traders have an appetite for risk and exposure, to say the very least.

Is Libra a Virtual Currency, Financial Instrument or E-Money? We Might Find This Out on Sept 6 [coingape.com]

The Economic and Financial Committee has requested the European Commission to explore the risks posed by Facebook’s Digital Currency Libra and analyze if it will be regulated as virtual currency, a financial instrument or e-money.

The national government envoys will delve into the analysis provided by the European Commission on the 6th of September. The EFC discussion comes after a warning issued by ECB’s executive member Yves Mersch this week.

Bitcoin (BTC) market capitalization dominance hiked above 70% at the start of the week, currently at 70.5% according to Coinmarketcap records. The pioneer cryptocurrency is having a great year so far, after witnessing almost 200% bump in price since the start of January. BTC’s price currently stands at $10,500 USD, a significant rise from the $9,100 USD region earlier last week.

With Bitcoin rising through the year, altcoins are yet to get their bullish momentum going – XRP and TRON being some of the worst performing cryptocurrencies. Will altcoins be able to bounce back?

As the graph below highlights, the NVTweet ratios were closely correlated until mid-July when Bitcoin moved towards historic highs. The ratios for Ether, XRP and Litecoin (LTC) nearly flatlined.

Hopes for an upcoming altcoin rally are getting fainter by the day. Institutions are continuing to drive the cryptocurrency market, according to new data, and they’re almost entirely focused on Bitcoin (BTC). Even prominent altcoins, such as Ether (ETH) and XRP, may fall by the wayside.

That’s the takeaway from a new metric by sentiment analytics site The TIE. Known as the NVTweet ratio, the metric measures changes in a cryptocurrency’s market capitalization with respect to its impact on social media. The higher a coin’s NVTweet ratio, the greater its value relative to Twitter activity.