ICON (ICX) is battling an important resistance zone on the weekly chart. Can it move towards 1$ and beyond in the near future ?

Today I want to discuss ICON and the battle it is having with the 0,60$ area at the moment. This has been an important area of support in September and October 2018 before it became resistance on February 2020 and right now. I will show some charts and explain some more and after that I will quickly talk about staking ICON as well with your Ledger Nano S.

Here is a weekly chart of ICON (ICX) : 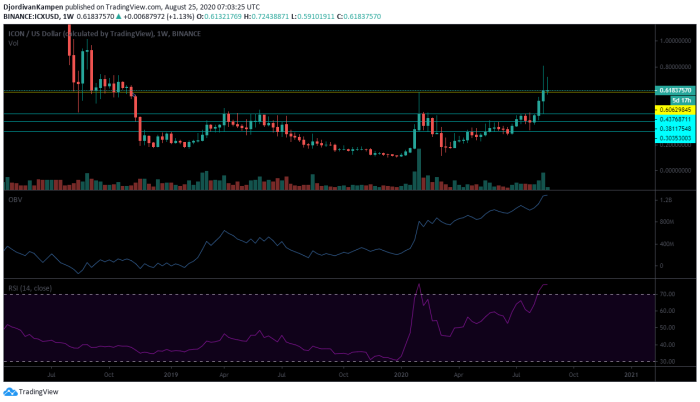 I have put the RSI (Relative Strength Index) and the OBV (On Balance Volume) on as well. OBV has been showing agreement with the price rising and has been very strong. Accumulation is there for ICON and this is great news for longer term price appreciation. ICON has been very strong this year with a low of around 0,11$ and a high of 0,80$. At the time of writing this post it is around 0,61$ and it is battling the resistance around the 0,60$ area (see the yellow line I drew). Last weeks close was very interesting (0,613$) and this week it is trying hard so far to stay above 0,60$. We can see in February 2020 a big wick and rejection at the 0,60$ level before starting the decline which was the coronadump.

The most interesting part for me is the OBV during the coronadump. It hardly moved downwards while price went really deep down. There has been some strong accumulation on ICON and it seems very unlikely we will ever see does lows again of around 0,11/0,18$.
The RSI is moving as well in agreement of price and the strength in the uptrend seems justified on the weekly. No bearish divergences have been created and this is good a well. However we are right now in the overbought territory. On a weekly chart it can stay here for weeks, so there is still time of course, but eventually the RSI will cool off and price in general will follow then. The most optimal scenario would be that ICON wins the battle of the resistance at 0,60$, moves towards the 0,80$ level and the 1$ in the coming weeks, before cooling off and create a support around the 0,60$ level. If this happens I will definitely keep my eyes on the 0,60$ area for buying the dip !

All of this does depend however on Bitcoin (BTC) and Ethereum (ETH). Both are battling there respective levels of 11.5K support for BTC and the 400$ level for ETH. Ethereum has been showing some weakness for me and is right now once again under the 400$ level. Closing today under this level feels for me a defeat and I would not be surprised to see ETH moving towards the 365$ level. If BTC loses the 11.5K level it will move towards 11.2K/11K, but I would assume it wants to go even lower towards the 10.5K/10.2K level. All this would most likely give ICON a price of under the 0,60$ level and this would mean once again rejection and then it will take some weeks again at least before it will get its next chance of fighting it. |

Here is a daily chart of ICON : 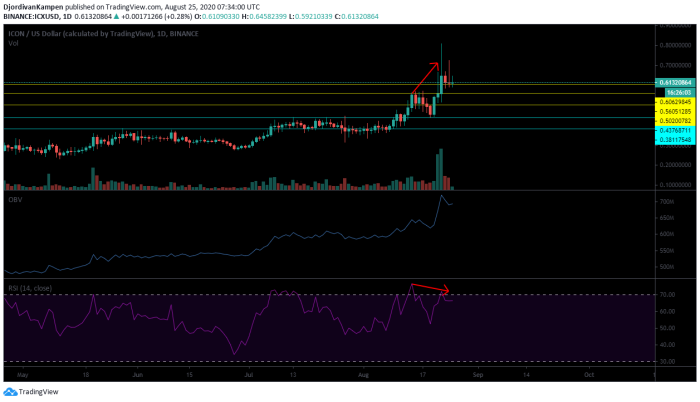 I have drawn red arrows to show that there is a bearish divergence on the daily between price rising and RSI dropping. This leads in general towards a short term decline, but the weekly chart did not show a bearish divergence so we will see what happens. Furthermore OBV is looking good on the daily as well, so nothing much to say for that one. I have drawn some yellow lines in the chart and they explain the following :

- The first one is the actual support right now

- The second one is a Fibonacci retracement level of 0.5 with price around 0,56$.

If BTC and ETH are moving downwards as explained above, I expect ICON to go towards the 0,50$ level at least. 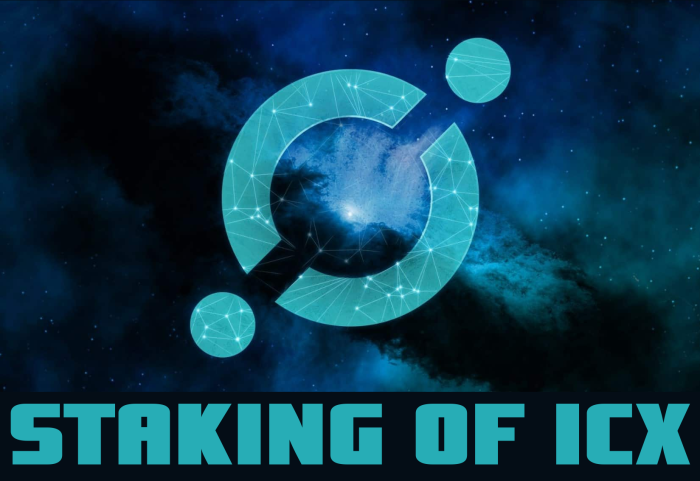 Anyway I have been staking for a while now with a small amount and it works really well ! I am steadily getting some extra ICX and I am very happy with it. Manually you can actually compound it by adjusting the amount you want to stake/vote and this process is fairly simple to do.

ICON is fighting the 0,60$ which is an important area. The weekly chart gives hope for a further rise towards the 0,80$ and even the 1$ level, but all this depends on BTC and ETH. They are both struggling and if they lose there levels of respectively 11.5K and 400$, I assume ICON will fall with them and will fail the 0,60$. On the daily chart we see a bearish divergence on the RSI and price, so in short term it could lead towards a downwards move. Seeing that BTC and ETH are struggling, it seems more likely for me that we would see a lower price than 0,60$ for now on ICX. This would be a second rejection at this level and could lead to some more downside in the coming weeks. However I am convinced that once it will get back towards the 0,60$ area, it will win the third time ! OBV has been showing a lot of strength and eventually price will follow the volume. 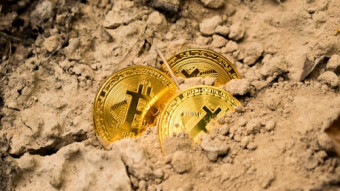