Chainlink (LINK) is finally retracing back well and gives you a chance to buy the dip + a quick update on Bitcoin !

In this article I will talk about Chainlink (LINK). It finally seems to be retracing back nicely for us to buy the dip ! After huge pumps we are seeing right now a decent retracement on the weekly chart. Here is a weekly chart compared to the Dollar : 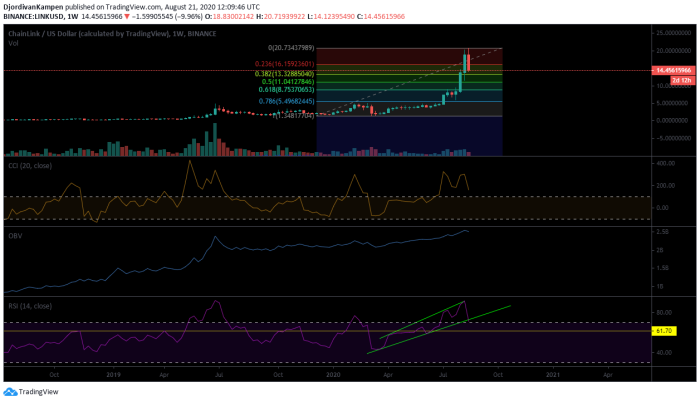 In this chart I have put the indicator CCI (Commodity Channel Index), the RSI (Relative Strength Index) and the OBV (On Balance Volume). Furthermore I have drawn the Fibonacci retracement levels.

There are some interesting things to notice. The first thing that turns up for me is the bearish divergence on the CCI indicator from the 6th of July and the 3rd of August. We see a lower CCI and price went a lot higher. The RSI did not show the same bearish divergence, but went higher as well, like the price. At the end it seems that the CCI is right and we see a retracement right now.

For the RSI I have drawn a green channel which seems to be respected very well since before April 2020. Right now we are battling against the lower green line and for now it is below it. This could lead to further downside for LINK and if it does break the channel this week, I expect it to move towards the yellow horizontal line I drew on the RSI indicator. Hopefully we can create support here.

The OBV right now is still looking good and this tells me that the retracement is meant to buy the dip ! It is still very high and even after price is moving from 20,73$ to 14$, which is already a decline of 30%, OBV is holding up and shows that there is no need to sell.

The Fibonacci levels are interesting to watch as well. Chainlink is getting close to the 0,382 retracement level which is around 13,33$. The 0,5 level is at 11,04$ and the 0,618 level is at 8,75$. I would be really cool if LINK goes back towards 8,75$, but I do not expect that for now. Volume on the decline does not look all to impressive for now, so I do not expect LINK to drop too much further. A 30% decline is already quite nice and I have already started buying in some. I will keep an eye out for Chainlink the upcoming days and next week. If it goes under 14$ I am going to buy some again and I will check the Fibonacci levels for further buying.

I believe we are seeing a very nice shake-out for Chainlink and I am impressed by its decline so far. It seems to me, looking at the OBV and the volume on the weekly, that this is rather a shake-out than a new trend towards the downside. Time will tell us if I am right. Chainlink was heavily overbought and needed a good breather for resetting the indicators.

Bitcoin (BTC) is seeing some decline this week after moving past 12k. Ethereum is battling with the 400$ level and Bitcoin want to try to stay above 11.5K. It is important to keep an eye out on both, because if they break down we will likely see some more downfall next week for most of the cryptocurrencies. 10.5K will be back on the table for Bitcoin and Ethereum could see around 350$ again. If Bitcoin can hold 11.5K then it is just consolidating and it could give room for altcoins to make some more pumps.
Here is a daily chart of Bitcoin : 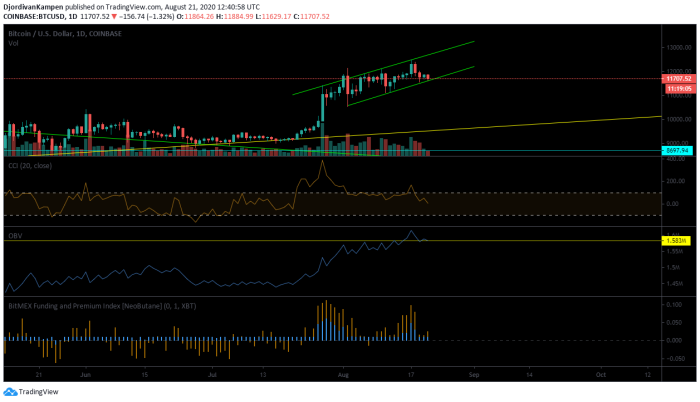 You can see the indicators CCI, OBV and the Bitmex funding rate. Furthermore I drew a green channel where price is in. Right now Bitcoin is battling the green line and hopefully it can hold again.
The CCI right now is creating a hidden bullish divergence with the CCI going lower and price being higher between the points of the 19th of August and the 21st of August. Depending if price can stay above 11.569$ today we would create one. Furthermore we are retracing on the CCI inside the dotted lines which is good. It means we are no longer overbought.

The OBV shows something interesting. I have drawn a yellow line to make it more clear. OBV right now is against the yellow line and is higher than the 10th of August when price was around 12K. This tells me for now that we are not really seeing a downtrend, but more a small shake-out. This can obviously change, but for now I interpret it as this. OBV is an indicator that shows accumulation and distribution. If we were in distribution, then OBV should have been lower than what we see now.

The Bitmex funding rate is interesting to follow, because it can often tell you if we are going to see a long squeeze or a short squeeze. When the bars are upwards it means there are more longs than shorts and if the bars are downwards there are more shorts than longs. Often the opposite will happen with price. You will see an upwards movement of price when there are more shorts and vice versa. Right now for a while we see that there are more longs than shorts. We have seen some squeezes already to the downside, but people are still believing that we are in a bull market. Right now the funding rate shows more longs, but it has declined already nicely, so we might see some consolidation in Bitcoin.

Personally I think for now we are more in a consolidation phase, rather then a real downtrend. OBV is still looking good and the CCI is retracing nicely inside its dotted line area. The Bitmex funding rate is having more longs than shorts, but has declined nicely as well. Things are cooling down and it seems to me we can hold the 11.5K level. Consolidating just under 12K is a dream in some sorts and often consolidating just under resistance leads to a break towards the upside !
If however we do break the 11.5K level I expect us to touch the 10.5K again and even the 10.2K area. This could be a nice moment to buy the dip again, because altcoins will retrace with BTC most likely.