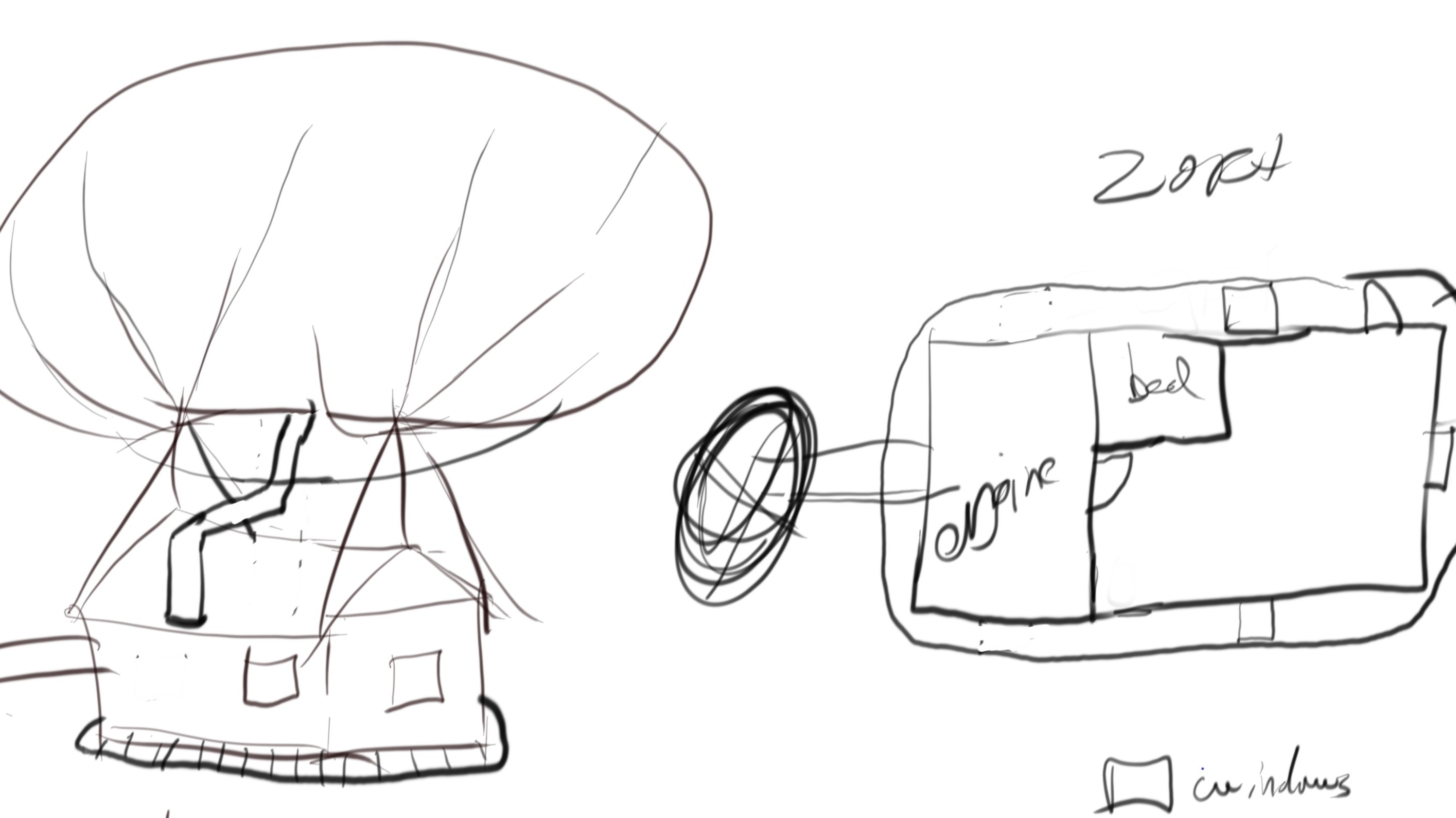 Sunrise always seemed strange to Anthony. Especially from the air. Just as he woke the first rays broke free of the horizon and began to illuminate the ceiling in his cabin. He sat up and looked out of the broad windows. Taking in the cloudscape below and ahead tinged with orange and pink, the first sliver of sun visible on the distant horizon and shining up at him and his airship.

He had named it the Loft because that was what it was. Perhaps, more accurately it was what it had started as... At least that was what his former landlord had called it- a loft apartment- but really it had been nothing more than a shack hastily built on the roof of a mid sized city tower block to increase the rentable space during one of the many refugee crises. Now it was something else entirely, his home among the clouds and his escape from the tragedy of the world below.

It had taken several years working in secrecy to adapt and improve the basic two room dwelling until it was ready for the air. Working at the landlords manufactory 6 days a week just to be able to live in the loft and afford barely adequate rations while he made the improvements and stole the necessary parts and technologies he needed to escape the drudgery and depression of life on the ground that was still the norm for most people. He was lucky to have the intelligence and motivation to make a better life for himself. A solitary one to be sure. But anything was better than the constant threat of war, the incessant food and water shortages and the deterioration of society as a whole.

Of course, the Loft was much more than a floating shack after a couple of years in the sky. Anthony had continuously improved it and expanded it until he almost never needed to land or trade for supplies. The Loft was more of a floating homestead than an airship, complete with a functioning greenhouse, rainwater collection and purification systems, and several systems to maintain its buoyancy. He was able to generate his own hydrogen from the water he collected through electrolysis, he could release additional gasbags and fill them with hot steam or hot air if necessary and he even had backup tanks filled with precious helium for use in dire emergencies. Thankfully electricity was not an issue- the old global network of Tesla towers still functioned well enough that energy was available almost everywhere in abundance- the batteries and conversion equipment he had installed stored enough that if he did fly through one of the rare dark zones he could always navigate his way out before the batteries drained.

With all of his improvements and adaptations the Loft wasn’t exactly pretty but he was proud of his home and kept pushing the craft to stay in the air longer between each supply run. It had been over three months since he last took the much smaller supply zeppelin to one of the less distasteful cities to trade for seeds and cuttings, helium or water or parts to repair one of the various mechanical systems that kept him free. It had been much, much longer, almost a whole year since he had been forced to land the whole craft. He still remembered with horror the night he had awoken in the midst of a storm with one of the gas cells punctured and venting hydrogen into the darkness. His abject terror when he realized he could not keep her aloft and had no choice but to land, hard, in the wildlands miles from any city that might have held the resources he needed to repair her.

It had taken a month to get her back in the air and another three to build the redundant support systems necessary to ensure such an event would never happen again. He was confident that he could stay in the air for days, perhaps weeks, long enough to land the Loft where he chose to repair it should such an event happen again.

Perhaps that was why the beautiful sight of the rising sun still seemed so strange to him now. When he had lived in the city the sun always shone down upon him, distant and often wan in the hazy air. Living as he was now several miles above the ravaged earth the days seemed longer than ever before and each morning and evening the sun looked up at him as it rose and set. It seemed brighter too in the crisp air of the open sky. It greeted him first of all people as he woke and said a final goodnight just for him long after it had dropped from the sky for all others. It made him feel special to be able to experience every day something that almost no one else witnessed.

Soon the morning light had crept across the ceiling, brightening steadily from the orange-pink of sunrise through vivid yellow to a nearly blinding white as it did so. By the time it began working its way down the wall above his dresser the full glare of true daylight was too much for his eyes. He twirled a spoked wheel affixed to the wall beside his simple narrow bed. In moments the windows began to darken and the glare of the sun was bearable once more. Not for the first time he thanked himself for being so determined to install rare and expensive electroglass in all the windows rather than settle for simple plate glass. Without its ability to block out some portion of the sunlight he would bake in his own airship. Legend had it that there was a time the sun did not burn so ferociously but no one took those stories seriously anymore. Within moments he had got up, washed with hot water (another luxury he constantly thanked himself for) at the sink in the corner, and was dressed and ready for whatever the skies might have waiting for him. He left his cabin on the starboard side of the airship and made his way along a narrow gangway in the open air to the bridge.

The wind swept his cloak around him as he walked in the cold air along the semi rigid frame of the ship with the enormous balloon rising above him. It seemed so odd that it could be so cold up here, and yet the sun was bright and hot enough to bake him inside his ship. Any prolonged exposure to it left him blistered and peeling for days. As if the wind alone wasn't capable of enough damage to his exposed skin, even when he stuck to the walkways on whichever side lay in the sun’s shadow. He had quickly come to regret leaving the gangways exposed. At least he had managed to rig up a rope railing along the outer edge to help avoid plunging off into the air when the wind swept up unexpectedly. He walked with his hand curled loosely about it ready to grip tight and hang on for dear life. He had safety harnesses and clips ready in the event he needed to work outside in poor weather but felt confident enough to do without most days. The narrow planks of the gangway ran along the outside of his cabin, in front of the tinted electroglass windows and continuing past a greenhouse that spanned the full width of the ship. He stepped off the gangway down onto a small semicircular deck and inspected a bank of large dials set into the glass wall next to the greenhouse door and then spun a spoked wheel just below them. Immediately he could see the glass begin to darken and obscure the plants inside the greenhouse. He then began to pump a lever that protruded upward from the deck. After several minutes working the lever he heard a gurgle and hiss as the sprinklers inside the greenhouse began to spray a cooling mist over the various plants that grew within. The mist served both to aid in quickly cooling the temperature to more acceptable levels, and to deliver a nutrient rich mix to the fruits and vegetables thriving in the soilless greenhouse.

With his primary food source taken care of he turned and stepped back off the other side of the greenhouse deck onto the gangway that led to the bridge. He walked quickly along and then stood in the shade of the arched entrance to the bridge for a moment and looked back down the flank of his ship. The enormous gasbags rose above and strained against the thick cables that anchored them to the domed greenhouse that was now glinting darkly in the morning sun. Just peeking up from the edge of the dome he could see the peaked wooden roof of his living quarters and still further behind one of the three turbines that gave him some ability to steer and maneuver the unwieldy ship. It spun slowly today as he wasn’t on any particular course and had no destination in mind. He could see the starboard turbine as well just below and to his left, attached to the mess of machinery slung below the greenhouse by struts and cables and turning just as lazily in the wind as the turbine aft. As he inspected the turbine and struts he noticed something in the distance, an odd shape against the backdrop of distant clouds.

He pulled a small collapsible eyeglass out of his pocket and quickly found the strange shape again. It looked like a small surveillance balloon of the type used in some of the larger, wealthier cities to monitor their populations of indentured and maintain control of their skies. He was nowhere near one of the big cities, however, so such a balloon was unlikely. He peered at the balloon, concerned that his ship had been noticed after all this time and one of the cities had sent a craft to investigate. With a deep sigh, he decided he had better start up his turbines after all to keep some distance from the balloon. Then he collapsed and pocketed his spyglass and headed into the bridge.