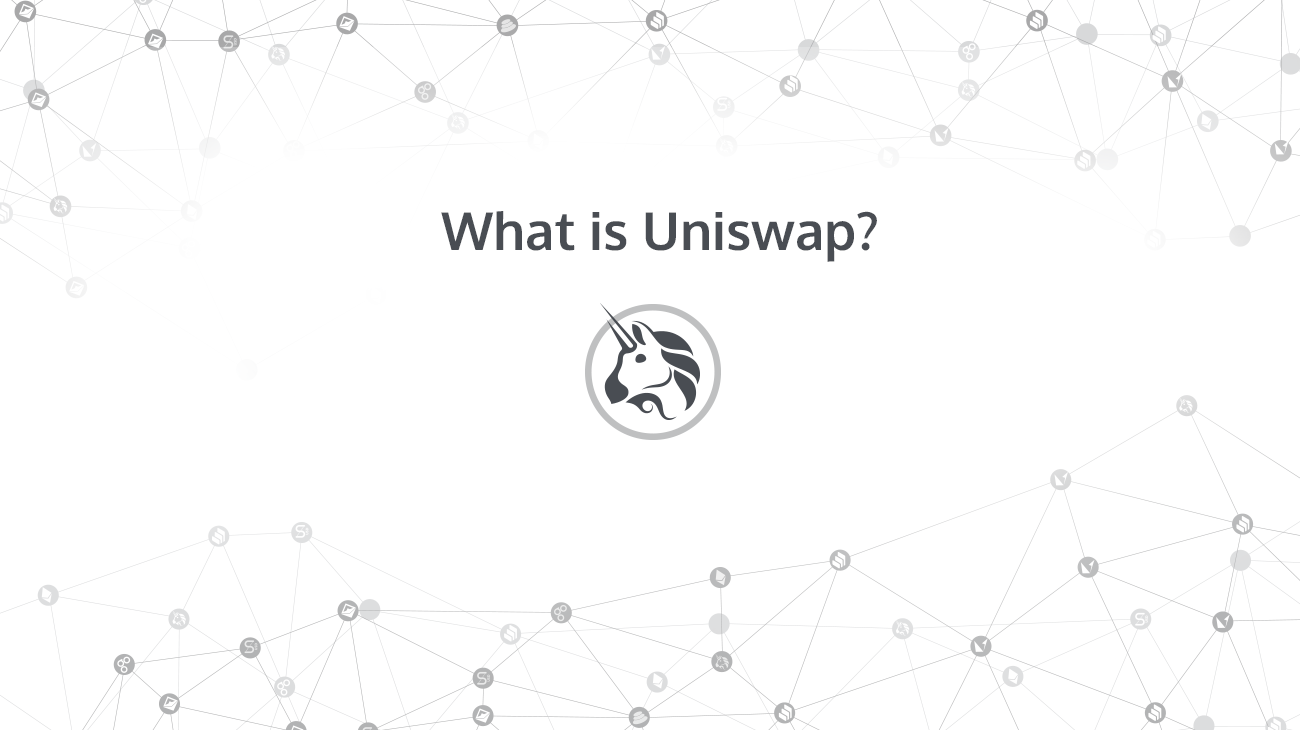 Uniswap describes itself as an “Automated Liquidity Protocol” on its homepage. Put simply, it is a decentralized exchange protocol that allows users to swap ERC20 tokens in a trustless manner or add liquidity to the protocol reserves to earn a commission.

The platform is a decentralized exchange (DEX) built on top of the Ethereum blockchain and it is one of the most widely used products out of the DeFi industry as it provides a way to trade cryptocurrency in a completely non-custodial manner as all swaps occur on-chain.

The key distinction between Uniswap and other DeFi products is the fact that Uniswap is trying to combat the problem of low liquidity in the industry by allowing everybody to provide liquidity rather than relying on an order book that matches buyers and sellers.

The way this works is entirely to do with the architecture behind the Uniswap protocol itself. As mentioned, it is built on top of the Ethereum blockchain through a set of smart contracts that allow liquidity providers to come and deposit cryptocurrency to add liquidity to the protocol. Liquidity providers must provide an equivalent amount of ETH to the ERC-20 token that they would like to add liquidity.

If the token that a liquidity provider wishes to add is not already listed, they can go ahead and make their own exchange pool to create an entirely new market on Uniswap without the need for any permission. 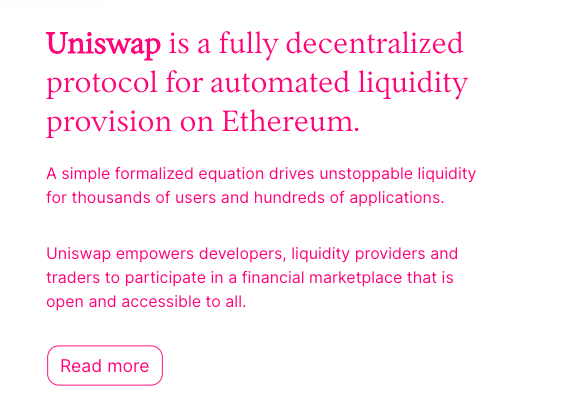 The goal of Uniswap is completely in line with the entire DeFi ethos as it aims to lower the barriers of entry to financial participation as well as removing any central point of failure.

Uniswap works by creating markets automatically and this allows users to come and trade tokens through the markets that are created. Its pricing model is known as the Constant Product Market Maker Model that uses an equation to set prices on the exchange for each individual liquidity reserve.

The Uniswap protocol itself consists of two smart contracts; An Exchange Contract and a Factory Contract - both written in Vyper smart contract programming language.

These two smart contracts provide the backbone that allows anyone to provide liquidity in any ERC20 market. Traders can then come and use these liquidity reserves to make trades on the Uniswap platform.

The History of Uniswap

Founded by Hayden Adams in November of 2017 after he was laid off from his first job as a Mechanical Engineer at Siemens the year before. Adams would introduce Uniswap publically by posting the following tweet announcing the launch of Uniswap to his, at the time, 200 followers;

At the time, Adams had been working on a Proof-of-Concept for his product in which he wrote his very first smart contract and created a website as an interface; 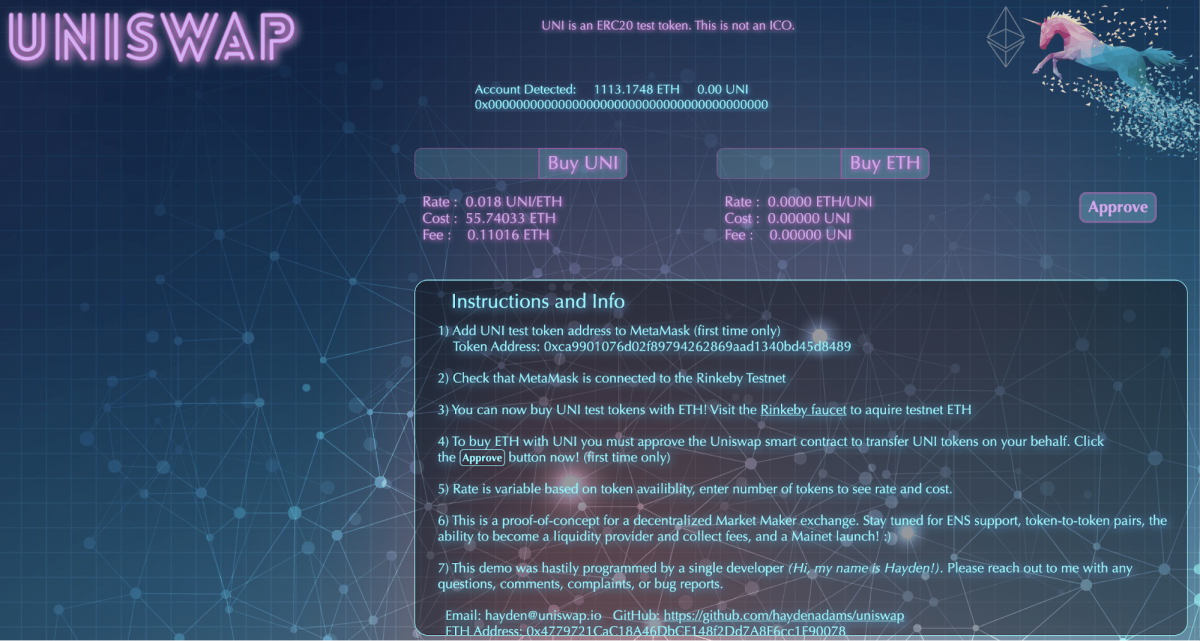 You can still see the original Uniswap design here.

The thing that stood out to Adams which was different from other DEX’s at the time was that the user interface of Uniswap was much less cluttered than that of competition. Somehow, the simple interface of Uniswap felt so much more intuitive to Adams than the other exchange interfaces that were built with traders in mind.

Adams knew there was an audience, like himself, that would gladly prefer a much more simple interface to trade coins.

At the time, the platform would only work for a single ETH/ERC20 pair and for one liquidity provider - a severe problem that Adams had to fix next.

These two problems were fixed by January 2018, however, Adams was financially struggling at the time. Being unemployed a few months, his crypto stash was quickly dwindling.

In April 2018 he set off for South Korea to head to the Deconomy 2018 event - without an entrance ticket. Luckily, he managed to meet Vitalik Buterin who advised him to apply for an Ethereum grant and suggested re-writing the smart contracts in the coding language Vyper.

As you could imagine, Adams immediately began to re-write the smart contracts after returning home.

By May 2018, Adams had decided he wanted to take Uniswap to full completion and mapped out everything that needed to be finished. He then applied for an Etheruem Foundation grant of $50,000 after receiving a quote from Runtime Verification to review and refactor the code for Uniswap.

Uniswap would receive this grant from the Ethereum Foundation in July 2018. Adams would immediately contact Runtime Verification and get the code up to scratch.

Adams would work like a mad man to get Uniswap up and functioning as quickly as possible. By November 2nd, 2018, on the final day of Devcon 4, the Uniswap smart contracts were deployed on the Ethereum mainnet and uniswap.io and uniswap.exchange were deployed. 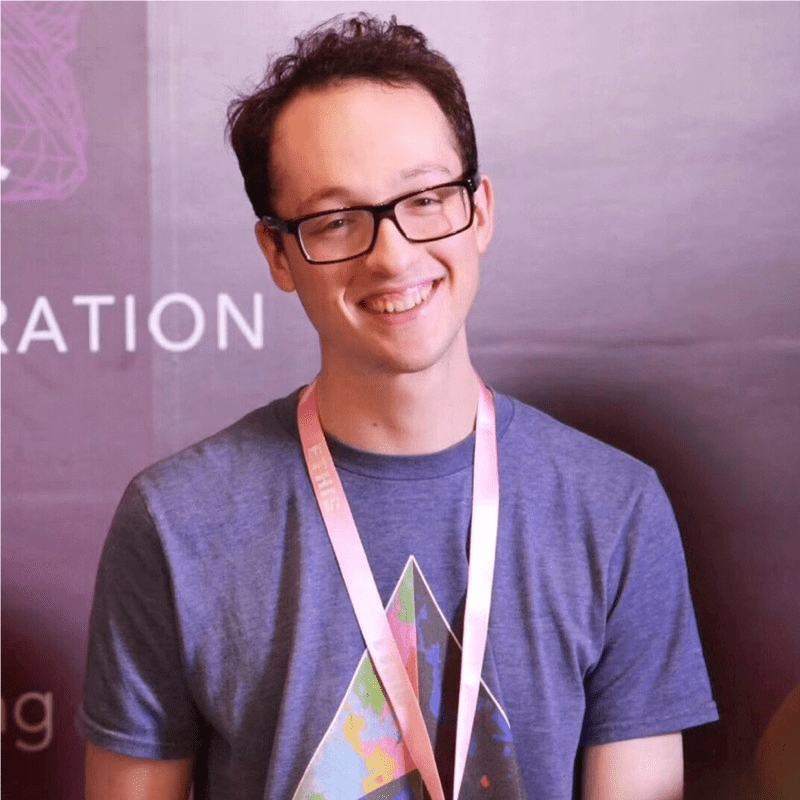 Upon graduating, Adams would take a role as an Engineer at Siemens in Melville, New York. As mentioned earlier, Adams would be laid off during July 2017 and would go on to found Uniswap in October of the same year.

Uniswap allows users to do the following;

The Uniswap protocol also allows developers to easily integrate the Uniswap exchange feature into their own applications just by adding a simple line of code.

Let us go through each of the features of Uniswap and explain them in a little more detail.

Swapping tokens is one of the main features of Uniswap. Users simply have to head to the main interface to be presented with the following screen; 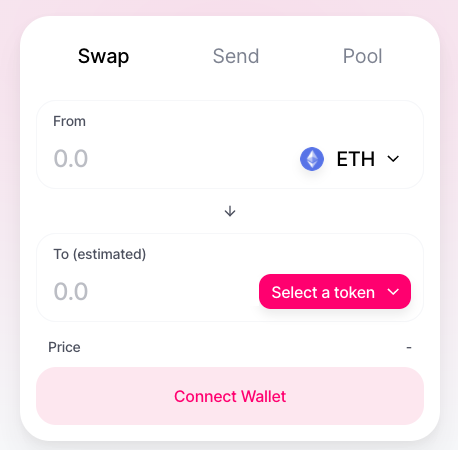 This allows users to easily swap tokens through a user-friendly interface. Just simply select the coin you would like to swap from and the token you wish to receive and hit swap.

The exchange charges a flat fee of 0.3% for the exchange on both sides.

Users can trade between the following options; 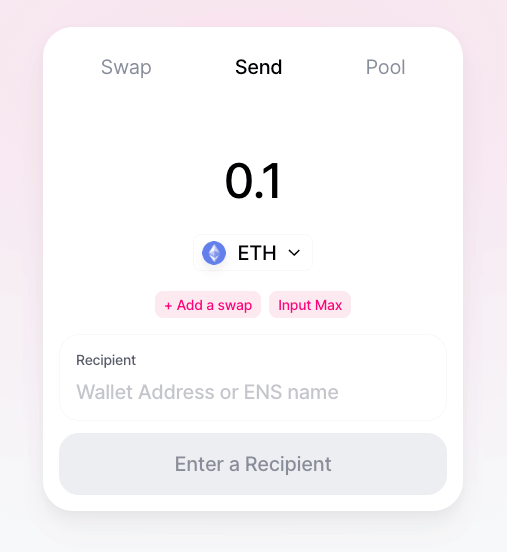 Anybody can add liquidity to any reserve on the Uniswap protocol and earn from the 0.3% fee generated from each trade.

To add liquidity the user heads over to the “Pool” page and Joins A Pool. 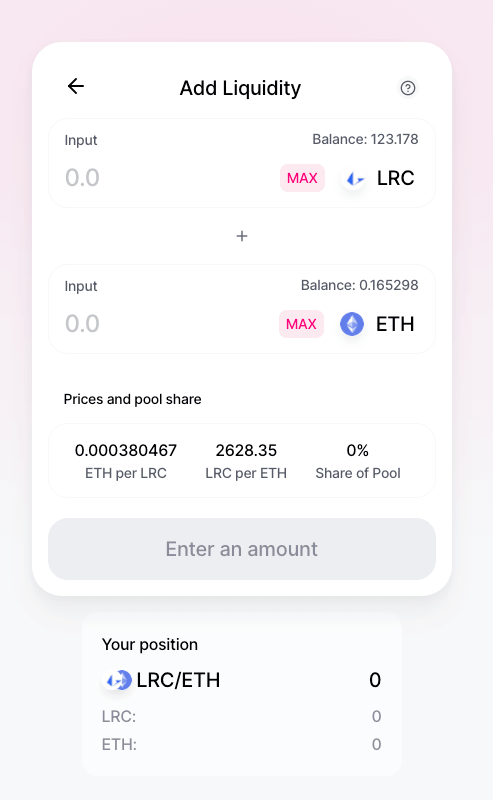 The user simply has to enter the amount of ERC-20 liquidity they would like to add and the equivalent amount in ETH will also show up.

Adding a new liquidity reserve is similar to joining a pool, however, the user creates the reserve pool themselves because it was not previously available.

Flash swaps are a feature on Uniswap that allows the user to take out loans that are repaid in one single transaction. Aave is the first-ever DeFi platform to introduce Flash Swaps. These Flash Swaps (A.K.A Flash Loans) are executed optimistically which means if the token can be requested and send to an address before payment is collected - so long, as the payment occurs before the end of the transaction.

Put simply, Flash Swaps allow users to take out uncollateralized loans which can be used for any purpose so long as the Flash Swap is borrowed and repaid in the same transaction.

As you can imagine, a strong grasp on coding is required to take out a Flash Swap on Uniswap and it is not accessible to everybody. This is because there is no interface available to conduct the Flash Swap just yet which means that it has to be executed through code.

Since launching Uniswap in November 2017, the largest milestone by far is the launch of Uniswap V2 in May 2020;

This upgrade introduced key stability and performance improvements to the entire platform. The interface for V2 was also upgraded to bring a new feel to the Uniswap dashboard. The V2 upgrade allowed for direct token-to-token swaps without the need for going through an intermediary ETH swap.

V2 also saw the introduction of flash swaps into the Uniswap protocol.

In April 2020, the largest cryptocurrency exchange in the world, Coinbase, announced that they would be investing $1.1 million worth of USDC into the Uniswap USDC liquidity pool in the hope to encourage growth in USDC and DeFi;

The Uniswap protocol was still performing very well even before the V2 upgrade. For example, in March 2020, the Uniswap exchange had seen the highest volume relative to all of the other DeFi DEX protocols that are available;

The following image shows a visualization of how popular Uniswap was relative to the rest of the DeFi industry in April and May 2020; 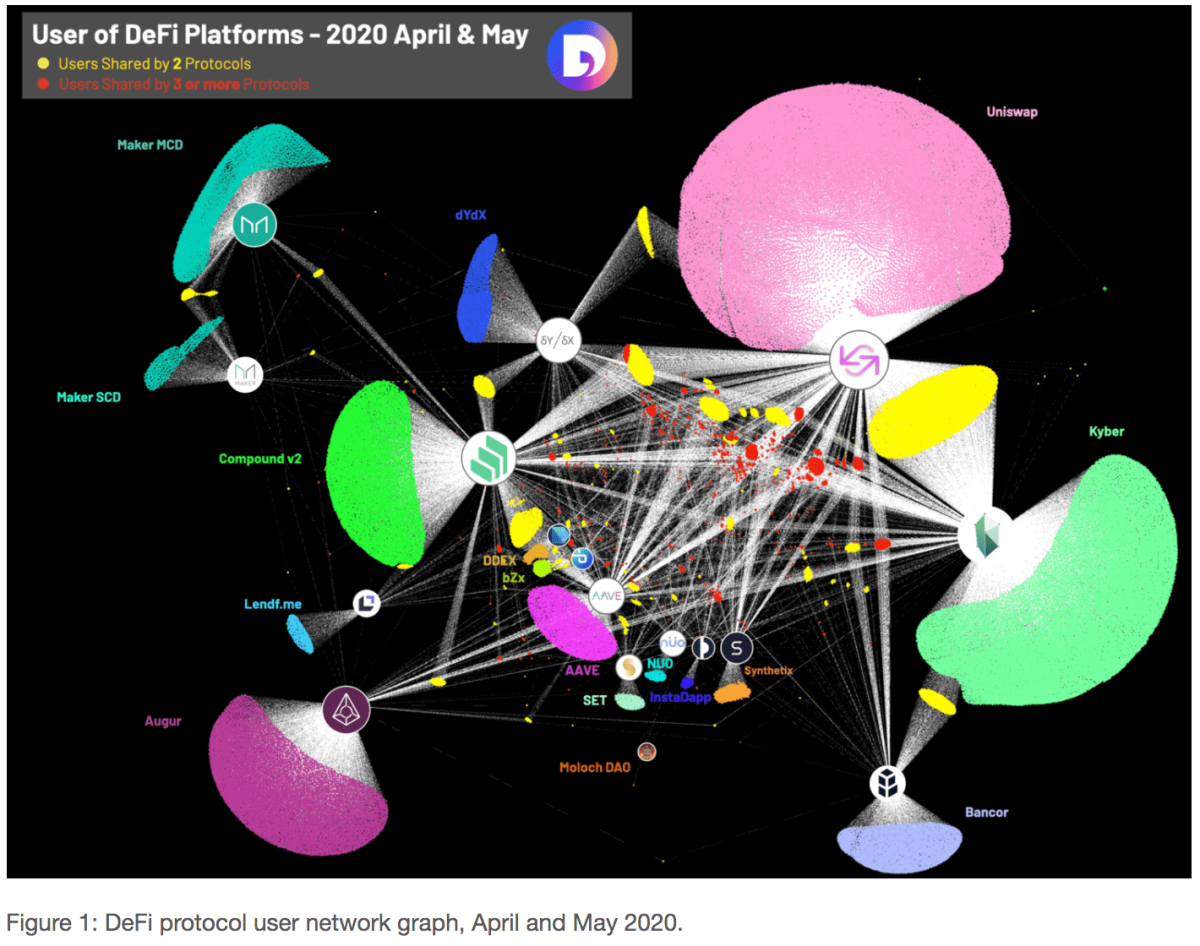 The image shows that Uniswap was the largest DeFi protocol during April and May 2020. It was closely followed by Kybe, Maker, and Augur.

In fact, by June 2020, Uniswap actually managed to conduct over $445 million trades on Uniswap - in one month alone;

In that same month, the liquidity providers earned over $1.3 million in fees which equates to $16 million a year. To compare, Hayden also included the fact that in June 2020 all the BTC miners combined earned $12 million in TX fees. This shows that, although the profit for Uniswap liquidity providers is still less than BTC miners, the profits are still increasing over time;

Uniswap is one of the leading projects to come out of the entire DeFi industry. Whilst other DeFi DEX’s provide complex trading interfaces with highly specialized trading tools, Uniswap decides to go in the totally opposite direction by releasing an interface that would be easy for anybody to use.

The entire protocol is one of the main centerpieces of the entire DeFi world. The protocol allows users to lend and trade whilst at the same time earning revenues from any liquidity provided.