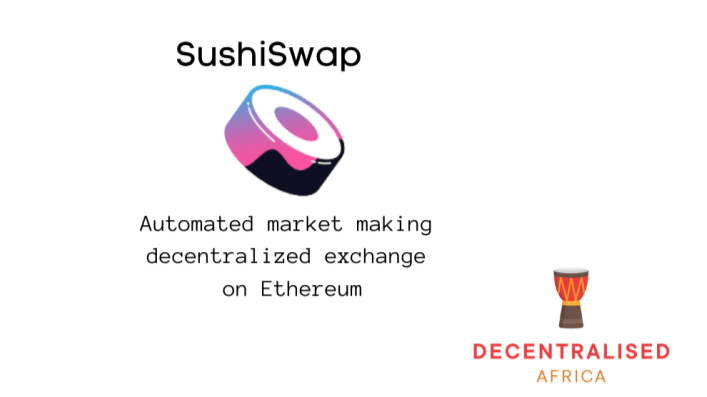 The state of the Decentralized Finance (DeFi) ecosystem can be explained in two words: food fight. The addition of this new automated market making (AMM) decentralized exchange (DEX) currently on the Ethereum blockchain to the DeFi space can somewhat be confusing as it comes in a food-themed outlay which is sushi. There are several thoughts as to what brought about this and many experts feel like the DeFi space may be going extreme with this one.

However, things may not be as they seem when describing the new protocol SushiSwap; the insane returns of over 2500% per invested capital are minute compared to what is in store for investors. For a period, Sushiswap climbed to the top of the charts to become one the most widely used DeFi protocol and that feat remains relevant.

SushiSwap was developed by two individuals namely; Chef Nomi and 0xMaki. Chef Nomi published a whitepaper explaining what the token was all about and this got 0xMaki interested in investing in SushiSwap. 0xMaki’s consistent dedication to making people aware of the protocol made him the codeveloper of the finance protocol and it was deduced that about 5 programmers worked on the project at the commencement of its operation. With very little details about the developers of this protocol, we understand that Chef Nomi resides in Asia and that 0xMaki may be French speaking.

SushiSwap is an unregulated crypto exchange built on the Ethereum network. The purpose of this protocol is to revolutionize Uniswap which is the most widely used Ether-based exchange in the crypto space. It is however quite similar to Uniswap in features.

SushiSwap offers bonuses to investors who provide capital to increase their liquidity pool and an ERC-20 token is given to them in place of the liquidity provided. While SushiSwap isn’t without its controversies, it has still amassed a large number of users willing to use its open-source system to manage their digital assets. All of its smart contracts and programs can be obtained through their GitHub or Medium posts.

Ever since Uniswap developed its own UNI token, the similarities between SushiSwap and Uniswap are undeniable. However, it is important to note that there is a certain problem affecting Uniswap which is solely attributed to the protocol. Investors in a liquidity pool on either token get a percentage of the winnings.

This is calculated according to liquidity provided as larger investments get larger profits and the downside to this is that rates for smaller investments become smaller as liquidity pools increase.

The model of profit dispensation by SushiSwap involves earlier investors getting 10x more than investors who join later which leaves very little profits going to new users of the protocol.

How does SushiSwap work?

Similar to many other decentralized protocols, SushiSwap comprises various liquidity pools. Each one of these houses 2 assets, which are Ether and LINK(Chainlink). This is made possible by a complex algorithm that analyzed the ratio of the first to second asset to deduce the market price.

When the swap protocol first started running, it evaluated prices by analyzing Uniswap tokens when obtained from its liquidity pool. These tokens can be used to withdraw liquidity provided and be deposited in other DeFi protocols or traded for other tokens as well.

Investors who held Uniswap tokens and staked them in Sushiswap at this time were rewarded with Sushi tokens and this went on for about 2 weeks.

The SushiSwap exchange is designed to allow token holders to trade up to 100 ERC-20 tokens. With a similar model to Uniswap, identity verification is not necessary to use the swap exchange. All that is required is a Web 3.0 wallet and Ether to pay charges for the swap. Exchange commissions per trade on SushiSwap is about 0.3% and 90% of this fee is disbursed as profits to liquidity providers.

There are several key products that make up the SushiSwap ecosystem and each serves a different purpose within the ecosystem.

The tokenomics (SUSHINOMICS) can be broken down as follows

Despite the seemingly over-the-top brand identity and the ruckus it has caused in its short time in the DeFi space, SushiSwap has over a billion in market cap and the swap protocol still generates over $180 million daily.

The craze SushiSwap has stirred up in cryptoland hasn’t earned it a spot on Etherscan’s rankings, so for that reason, the decentralized exchange will need work to build a proper image in the DeFi space.