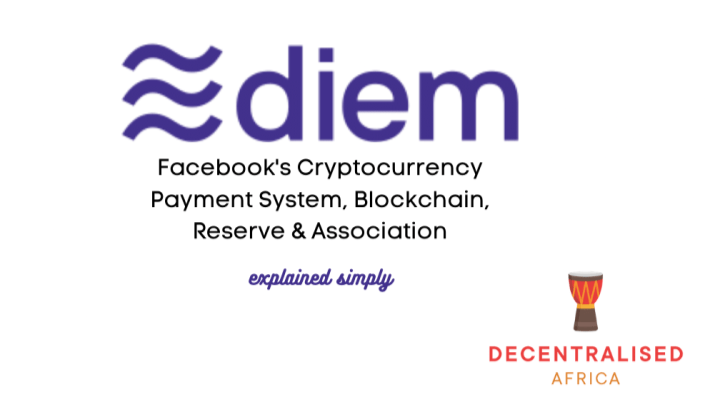 What Is Diem, Facebook’s New Cryptocurrency?

Diem (formerly known as Libra)  is a cryptocurrency created by Facebook on a secure and reliable open-source blockchain, backed by a supply of readily available assets, and placed under the management of an independent association.

According to the White Paper, the Diem Association’s goal is to leverage the innovative approach of using distributed governance through Association Members and distributed ledger technology to create an open and trustworthy system. The project hopes to enhance traditional financial systems to become programmable, interoperable, and upgradeable.

Diem is poised to become a global currency that billions of individuals around the world will be able to use for one transaction or another. Some reports suggest that Diem could be well on its way to earning the title of “the internet of money.”

·   It is built on a scalable, secure, and reliable blockchain.

·   A reserve of real assets is used to give it value.

·   The Independent Diem Association (formerly known as Libra Association), tasked with the platform’s development, will be in charge of its operation.

Diem is one cryptocurrency that has what it takes to bridge the gap between the crypto world and the conventional money system. Especially for the unbanked, this project may present a great opportunity for the billions across the world who are still without access to legacy banking services. Facebook has marketed Diem as key to bringing about financial inclusion.

·   The unveiling of Diem was expected to occur sometime in 2020.

·   Diem is designed to be less volatile compared to other digital assets (stable digital currency).

·   A reserve of actual assets will be utilized to determine the value of Diem.

·   Diem has the potential to become the first cryptocurrency to enjoy global adoption, by serving billions of the world population due to Facebook’s reach.

This is a decentralized medium of exchange that’s designed to uphold low-volatility, which billions of people around the world will be able to use for various transactions.

The Diem blockchain was built from scratch using well-understood approaches and innovative techniques to ensure that every vital detail necessary for the intended effect on the financial markets is included. The Diem blockchain is guided by these three decisions:

Diem – The Currency and Reserve

Diem is meant to function with the full support of a reserve of real assets (the Diem Reserve), and a number of exchanges that will facilitate the purchase and sales of Diem. What this means, in essence, is that an individual with Diem can easily convert the digital currency into fiat money per the exchange rate of that moment.

While the traditional currency is backed with an asset like gold, Diem will be backed by several low-volatility assets like short-term government securities and bank deposits. It is important to note that Diem will have no attachment to any currency. Rather, the price of a single Diem will depend on the market value of the underlying assets.

Novi wallet is a mobile wallet, which bears a close resemblance to top online payment apps like Venmo. Although owned by Facebook, Diem wallet is restricted by law from forwarding information or data belonging to users to the parent company.

The wallet will operate as a standalone app and at the same time will be available on Facebook Messenger and Whatsapp. The wallet’s available balance will be automatically displayed in fiat currency exchange rates.

Novi has promised to observe international guidelines for preventing money laundering and terrorism financing. Other services, such as payment of bills and public transit are expected from Diem in the future, similar to what’s obtainable in China through WeChat and Alipay.

Those with a bank account will find connecting to Novi very easy. The process is likened to connecting to any other financial account. Users without any bank account can sign up to Novi using their smartphones, and then fund their account with money or withdraw from it via a certified distributor.

When users add money to their wallet, Facebook will convert it into a Diem digital currency that you can send to anyone around the world. It works by simply selecting who you’re sending to, entering the amount, seeing the exchange rate, and making the transfer. The funds arrive instantly in the Novi wallet, which means users don’t have to pay more to get it there faster. Users can also choose to keep a balance in the wallet or withdraw in their local currency when and where they want.

Diem has received support from various organizations, in addition to the parent company, Facebook. About 27 companies have indicated an interest in assisting Diem and its Novi mobile wallet, to become a primary means of sending and receiving payments across the globe.

Upon its launch, which was expected to take place this year, Facebook’s Diem would be the most daring move by a mainstream company to secure a stronghold in the cryptocurrency industry.