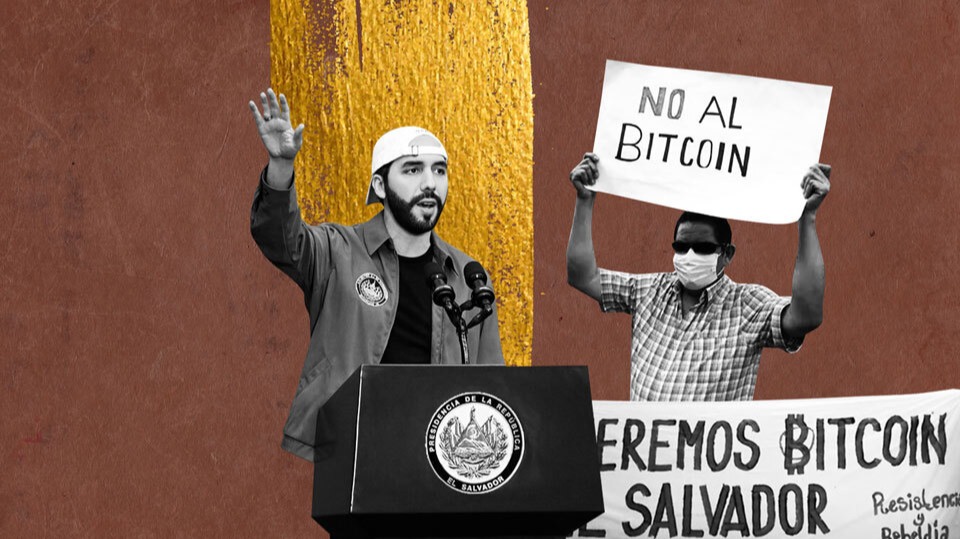 El Salvador Adopts Bitcoin as Currency Despite Protests and Risks

The government of El Salvador, led by Nayib Bukele, put Bitcoin into force as a legal currency this Tuesday, amid protests and the disapproval of 70 percent of the population, disapproval from the United States, and the warnings of various economists and international organizations on implicit risks.

Hours before the Bitcoin Law went into effect, the government announced the purchase of the first 200 BTC. “Our brokers will be buying a lot more as the deadline approaches,” said Bukele through his Twitter account.

El Salvador is the first country in the world to legally adopt Bitcoin as a legal currency. Twenty years ago, it dollarized the economy to overcome the inflation problems that the country suffered. Since then, Salvadorans have bought and sold in dollars, and according to the latest polls, they’d prefer to continue with this system.

Critics of Bukele, whom the Supreme Court has just cleared for reelection, argue that the controversial measure will affect the local economy, credit, foreign investment, and the finances of Salvadorans.

But the government argues that it will improve bankarization in the country and prevent the loss of some US $400 million in bank fees for remittances that Salvadorans send from abroad.

Seven out of ten Salvadorans Don’t Know what Bitcoin Is

“That bitcoin is a currency that does not exist, it is a currency that is not going to favor the poor but the wealthy, because a poor person, what can he invest, if we barely have enough to eat?” says José Santos Melara, a veteran of the Salvadoran civil war (1980-1992), while participating in a protest against Bitcoin.

According to a survey conducted by the Central American University (UCA) in mid-August, seven out of 10 Salvadorans do not know what Bitcoin is, do not agree with its implementation, and distrust the new currency.

Another opinion study by the pollster LPG Data ordered by the newspaper La Prensa Gráfica found that 65.7% of those consulted disapproved of the use of cryptocurrency. While 72.2% said they were not willing to accept cryptocurrency as a payment mechanism.

However, in that same study, supporters of adopting the digital currency said that the cryptocurrency will benefit the country’s economy. Supporters also believe that Bitcoin will be useful to carry out transactions, facilitate the sending of remittances, and serve as an innovative payment mechanism.

Disapproval Is Higher among Women and Poorest Citizens

Among the people “least willing to accept and receive bitcoins,” according to the study, were “women, older people and people of lower socioeconomic status.” The survey found that 83% of low-income people are unwilling to accept payments in BTC either.

The resistance of Salvadorans to Bitcoin stems from the lack of information about BTC and its operation. Although El Salvador ranks second among Latin American countries for connected mobile lines, most of the telephones are not smartphones, which is a limitation when obtaining information and carrying out banking transactions.

Laura Andrade, director of the Public Opinion Institute of the UCA, believes that the resistance of the majority of Salvadorans to BTC is because they do not consider cryptocurrency a safe way to improve their economic situation.

Criticisms and Fears of the People

El Salvador’s Bitcoin Law has also been accused of containing an “official wallet” modality that threatens “the privacy of the management of your income, since the name and number of DUI, and NIT are required,” says the political analyst and former Salvadoran diplomat Rubén I. Zamora.

He warns that “this will allow the government to have direct information on the financial life of citizens.” Zamora explains that the population’s rejection of Bitcoin is due to the fact that people “are already used to using the dollar,” and “they do not understand how it [Bitcoin] works and they fear that it means loss of income.”

Bukele’s attempts to explain Bitcoin have been futile, according to poll results. He accuses his opponents of sowing fear in the Salvadoran population and lying about the true nature and benefits of BTC through his prolific Twitter account.

However, Zamora warns that the government has not adequately prepared the systems that will sustain Bitcoin adoption. He says,