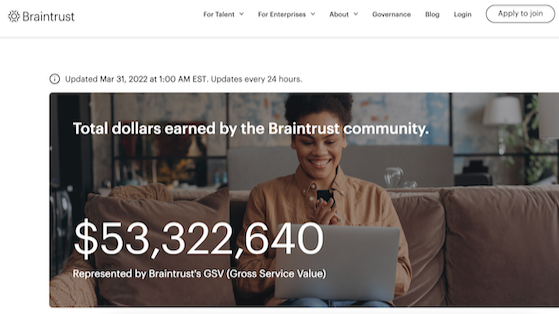 Primer — Braintrust is a user-owned, talent network. It does not charge any commission from the talent. For talent matching, it charges a 10 percent flat fee from the clients. The 10 percent fee is reimbursed to the nodes who bring in the client. Nodes earn 10 percent and Braintrust tokens. The problem however was treasury depletion with every payout owing to the fixed token supply. Braintrust fee converter solved this and helped create value and utility for the token.

Web-enabled marketplaces changed the way we lived our lives. It created a trusted place for buyers and sellers to connect and transact. And yet, very few of these marketplaces manage to break out and become profitable. The revenue generation is based on taking a certain fee for the transaction. For the endeavor to be profitable, scalability is paramount. When there are enough buyers and sellers can the business pay back its investors. The fee keeps increasing as the business scales. Eventually, it becomes disproportionate in terms of the value extracted versus the value offered. The end goal of any for-profit organization is to increase profits, and that equates to increasing fees. It creates a misaligned incentive structure between those who make their living on the marketplace and the operator itself. “The Uber Workplace in DC”, a two-year investigation report of the working conditions of 40 Uber drivers in the Washington, D.C. area revealed that Uber drivers did not know how much they were earning or losing. Almost 33 percent of the drivers took debt as a result of their work on the ride-hailing platform. We will come back to this study at the end of the article.

Is there a better solution? What if these incentives could be aligned? Can it be achieved by transferring the ownership of the marketplace to the users who make their living on it? Is that what Braintrust is doing? For starters, only a blockchain-based token makes this possible where the control can be distributed globally to these users. Blockchain has taken the baton to transition Web2’s dominance into Web3’s equivalence by turning them into public goods.

There is a similar mismatch in the talent pool industry. Middlemen like Upwork and Fiver are extracting disproportionate value from the talent. Brainstrust aims to solve this by taking zero fees from the talent and a flat 10 percent fee from the client. The 10 percent fee is paid to whoever brings the client and they are called nodes. It is meant to cover the costs incurred on bringing an enterprise client. Put simply, Braintrust is a set of smart contracts that helps people find work. It was started with a raise of $30 million and 6 core teams. Braintrust launched its token $BTRST last September and with that platform became decentralized and turned into a DAO. The 6 core teams are the nodes and the token holders are the owners of the platform. There is no executive team driving the project anymore.

Let’s understand the tokenomics of Braintrust before we delve into the Brain Fee Converter. The tokenomics model is illustrated below. Click on the link for the whitepaper. BTRST is the governance token of the protocol. Out of the total supply of 250MM, 54% is fixed for Community Incentives & Rewards. The use-cases of the token include governance, bid staking, and career benefits. It might increase in the future depending on how the community sees it. This utility of the token within the protocol makes it an invaluable resource for all the participants. With a fixed amount of token supply, there is the associated problem of token depletion. This problem becomes pronounced with time as the rewards reduce. There are lesser incentives for the community members to keep investing their time towards improving the network. It simply isn’t sustainable.

On Braintrust, Clients pay a 10% fee in addition to the amount paid to the talent. This 10% was paid in fiat currency to nodes or used to fund platform upgrades or community-targeted grants and bounties. The reinvestment of the 10% fee into the protocol had two problems. One, it wasn’t adding value to the token, and second, it wasn’t governed directly by the protocol. A comparison of the GSV (gross service value) and the BTRST token price shows how the price of the token has been going down while the GSV has been increasing month on month. The community rewards and incentives paid out through BTRST have created constant selling pressure. This has uncorrelated the token performance from the GSV where the increased demand has failed to add any value to the token. Towards this, one important proposal that was set up and passed was the introduction of a Brain Fee Converter. Brain Fee converter was the first major protocol update for the DAO. It is a dapp and smart contract that nodes on the network and injects a portion of the GSV (gross service volume) into the Braintrust Economy. The smart contract buys $BTRST from the exchange directly and then sends that to the treasury(Governor Alpha) to pay the rewards.

Clients pay an invoice in USD along with the 10% fee. Nodes convert the fee collected in USD to USDC and send it to the fee converter. The fee converter uses the USDC to buy the $BTRST token. The $BTRST token goes to the DAO treasury(Governor Alpha) and through that to the nodes and the community. So every time an invoice gets paid it doesn’t deplete the treasury. It is replenished making it sustainable in the long run. This helps in the value accrual of the token and returns the ownership of the network back to the treasury and eventually to the token holders. This continuous upward pressure on the market creates a system that breaks out of speculation and becomes sustainable. Node revenue in the Braintrust economy is still mostly off-chain. Nodes need to actively opt-in and pay their dues. The amount of nodes (six) and the size of the economy is small at the moment. An honest and off-chain reputation-based mechanism is sufficient to ensure node participation for now. Nodes that don’t participate risk losing their access to the Braintrust talent and client network besides damaging their reputation.

Future on-chain BTRST token mechanisms will act to further secure Braintrust against nodes that do not engage in honest behavior. It will also allow to scale up nodes in a much more permissionless, trustless way. Mechanisms including token staking, slashing, on-chain reputation, and others will be introduced to enable this kind of future scaling.

Decoding the Code of the Fee Converter

The fee converter consists of an on-chain converter contract and a front-end dApp. The on-chain converter is a smart contract that accepts USDC, converts that to BTRST using Uniswap, and then sends that to the treasury(Governor Alpha). The contract will upgrade to support other liquidity sources in the future. The code is open source and can be verified here.

The swap is done on Uniswap v.3 through the BTRST/USDC 1% V3 pool. The smart contract calls the UniswapV3 liquidity pool with the parameters above to implement a swap. USDC is swapped for BTSRT with additional 1% pool fee to Uniswap LPs. The swapped BTRST are sent to the protocol’s treasury. The front-end dApp provides the interface for the nodes to submit their USDC. The deadline: deadline parameter is also sent to the liquidity pool. This protects against wild price swings and long-pending transactions. The slippage tolerance and the deadline are suggested but can be selected by the nodes. Future versions of the converter could incorporate an on-chain Oracle and/or a slower automated buy drip to increase the conversion efficiency. Given that the aim is to buyback BTRST, high slippage makes the buyback even more effective. However, if the slippage changes the price excessively without being aligned with other markets, it creates an arbitrage opportunity for arbitrageurs rather than the BTRST economy.

The Brain fee converter creates a flywheel effect aimed at the success of the DAO and the value accrual of the token. There is now a direct relationship between the token price and the network volume. More volume translates to more demand for the token. As the network will grow, so will the GSV. It will mean more reward tokens for future funding towards R&D. This eventually has a 3,3 effect with utility where the community is rewarded for its own support of the DAO.

In the words of Christopher Stanton, a Marvin Bower Associate Professor at Harvard Business School, “It makes it an efficient staffing solution that provides transparency to both sides of the market”. The graphical representation below helps to understand the flywheel effect.

Or, watch the video for more information