Reviewing the 11 Hot (and not) Cybersecurity Trends 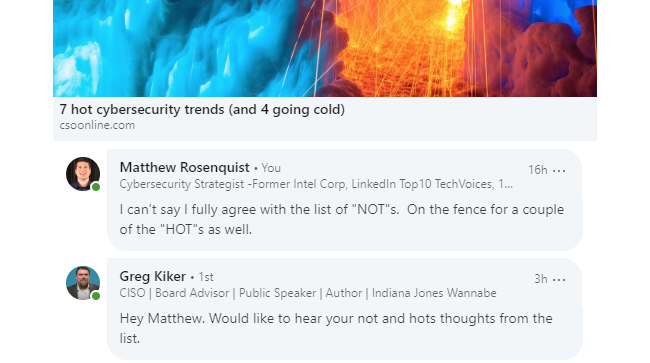 Recently an article came out describing several cybersecurity trends which are hot and a few that are going cold.  I read through the list and made a quick comment in LinkedIn that I was not entirely in agreement with the assessment.  I figured that would be the end of it, but a colleague asked if I would elaborate.

Well, I type a lot and the normal response fields just don’t like when I blither on.  So, here is an informal, poorly formatted, off-the-cuff, and less-than-thorough response for that request.   Forgive me.

Before I dive in, I want to bring up two important points.  First, I want to recognize Josh Fruhlinger for coming up with the original list and publishing it to the world.  It is daunting to cybersecurity professionals to predict value and future trends.  That is why most simply don’t do it.  So, it takes a brave soul to put themselves out on social media for everyone to criticize and for history to judge.  Credit goes to Josh for his bravery!  Secondly, these discussions are rare but hugely valuable to stir discussion, debate, research, and collaboration.  We, as the cybersecurity community, should spend more time communicating and working together on exactly these topics.  So, if you are reading this add your comments below!  We are stronger together.

That said, here is how I rated Josh’s original list:

Overall, I think it is a great list to discuss and debate.  What are your thoughts?