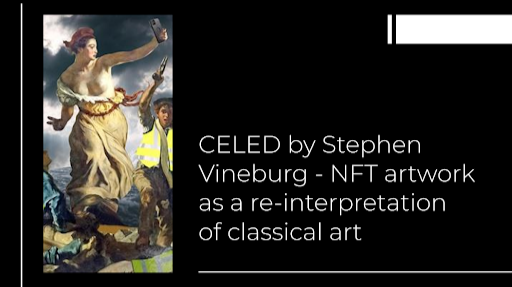 Evolution from digital art to NFTs happened all over the world pretty recently. Experienced and talented artist named Stephen Vineburg , was one of the people who saw a great opportunity for bringing his artworks on a new level – by transporting them onto blockchain and presenting it as a completely new way of seeing adeptness.

In 2022, Stephen Vineburg, an artist from the UK, launched his NFT artwork CELED as both a unique NFT, and digital phone-based AR filter, that brought 3D life to a still image. He has worked extensively with Areyes Studios in development of these projects.

So what is CELED about?

As Stephen says himself, making that project was predominantly about a few things: developing a conceptual art practice with a focus on using AR to explore contemporary issues, and experimenting with transferring value between the physical world and the digital.

CELED is an amalgam of elements of ‘Liberty Leading the People’ by Eugene Delacroix from 1830 and ‘The Wreck of the Medusa’ by Theodore Gericault from 1818. Main idea of the art piece is an observation on extant affairs, where despite all the chaos and distress that is being experienced by the society, our leaders are perhaps more focused on their own vanity than providing leadership.

Hence the figure of ‘Liberty Leading the People’ with the French Tricolor has been replaced by ‘Celebrity’ and the Tricolor replaced by a selfie.

Vineburg believes the current state of the NFT market can be compared to the introduction of the stereo long playing vinyl record in the 1950’s. At that time, a popular activity was to buy a recording of a ping-pong match and then marvel at the apparent magic of the ball sounding as though it was rebounding between the two stereo speakers. Yet, within ten years the

Beatles had released the Sgt Pepper album and taken stereophonic recording to an artistic high. Stephen believes that the NFT market will soon move away from pieces that simply showcase digital technology, to using the artform to make provocative artistic statements and that CELED is an early mover in that direction.

Stephen is an art historian with a multifaceted personality having interests in art, film, music and business.

In 2018, Stephen was an Executive Producer of the award-winning, independent film, ‘Emu Runner’ which had its world premiere at the Toronto Film Festival (TIFF). In 2020, he was also an Executive Producer for the short film, ‘The Story of Lee Ping’, which was a finalist at Flickerfest, an Academy® Award Qualifying and BAFTA Qualifying festival and nominated for an Australian Directors Guild Award.

The future of NFT artworks

We can clearly see that it takes effort and desire to create something beyond funny pictures that are coded on the blockchain.

The future of NFT and AR art lies in the boundaries of discussion of important topics, bringing up uncomfortable subjects and putting valuable points onto the projects that will make people think from a different perspective, while reconsidering some of their views that could be obsolete or imposed. Explore his artwork on Foundation.

CTRL / ART / D is the definitive NFT agency that takes your assets to the global market. Whether it is artwork, music or more, we execute on the token, security, listings and PR, ensuring that you reach valuations, that were unavailable. Website: https://www.ctrlartd.com/