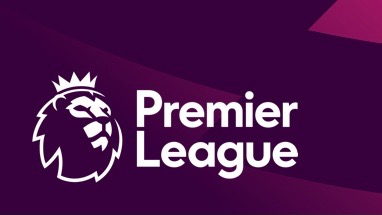 I hope you are all well and had a great weekend, welcome to CryptoGod-1's blog on all things sports. This reduced weekend of action saw four clashes which began with a thrilling encounter on Friday night.

So in terms of the predicted scores, I got 0/4 correct this weekend. In terms of match-winner/loser, I managed to predict 1/4 correctly in this round of games.

This game had everything, it really did. Leeds paid a high price for the three points though, as Raphinha tested positive for Covid-19 prior to the game. Then during the match Bamford, Llorente, Klich and Meslier all had to be substituted due to injury, including making use of the concussion substitution protocol. Wolves were themselves reduced to ten men as Jimenez got a second yellow, while they also lost Neves to injury. Wolves had been two up at half time after Otto and Trincao had given Lage's side control of the match, but once Jiminez saw red for a coming together at high speed with Meslier the match changed. Wolves were the creators of their own downfall with some dreadful defending, as Ait-Nouri was caught out for the first, Sa for the second and Boly was too tentative for Leeds third. Wolves lost more ground in the race for Europe, while Leeds gave their survival chances a boost as they came back from two goals down at half-time to win a Premier League game for the first time ever.

Arteta's side picked themselves up from their midweek defeat to Liverpool to continue their march for top four as they dominated possession and chances for the first period of the game and got the opening on 30 minutes. The ball fell to Saka on the edge of the area who scored with a delightful finish. Villa pushed on in the second half and applied late pressure but a lethargic performance, especially from Coutinho, coupled with wasted chances means they remain ninth in the table. Arsenal remain fourth in the standings, sitting four points clear of Manchester United in fifth place, and still have a game in hand over their rivals. Arsenal have now managed to keep 13 clean sheets in the Premier League this season, their most in a league campaign since 2017-18. Villa meanwhile have managed to win just one of their last six Premier League games at Villa Park.

The Foxes scored two beautiful long range first half goals to give themselves the victory at the King Power stadium. The first saw Castagne strike from just outside the box with a driving shot that arrowed into the top-right corner. Thirteen minutes later, Maddison scored a wonderful curling 25-yard free-kick into the opposite top corner of the net. Iheanacho could have made it three in the second half when one on one with the Brentford keeper Raya, but shot wide. The Bees were missing Eriksen who had Covid-19 and it showed, but they improved in the second half and Leicester needed Schmeichel to keep them in it. With five minutes left of normal time Wissa struck an effort from outside the box to set up a tense finish, but Leicester held on for the three points. Brentford have now failed to keep a clean sheet in each of their last 12 away games in the league, while Leicester have won three of their last four league matches.

Spurs started well and took the lead within ten minutes as Zouma diverted Harry Kane's cross into his own net while under pressure from Son. Son hit the post soon after, but on 24 minutes he struck an unstoppable shot into the top-left corner of Fabianski's net. West Ham did not give up, and Dawson won a flick-on from Cresswell's out swinging corner in the 35th minute, leaving Benhrama to finish from close range. Antonio missed a sitter in the second half, and Son showed him how it is done when raced through from Kane's flick-on to slot past Fabianski. West Ham fans will still be delighted with their midweek European exploits, and still have a strong chance of getting European football again next season. As for Spurs, they have kept themselves alive in the race for top four.

A look at the top half of the table, and with the top teams not in action due to FA Cup games, it was the race for top four with saw the biggest impact this weekend. Spurs win saw them climb to 5th and above Manchester United. West Ham and Wolves both lost, and have played more than their rivals above them so are most certainly out of the reckoning for Champions League. 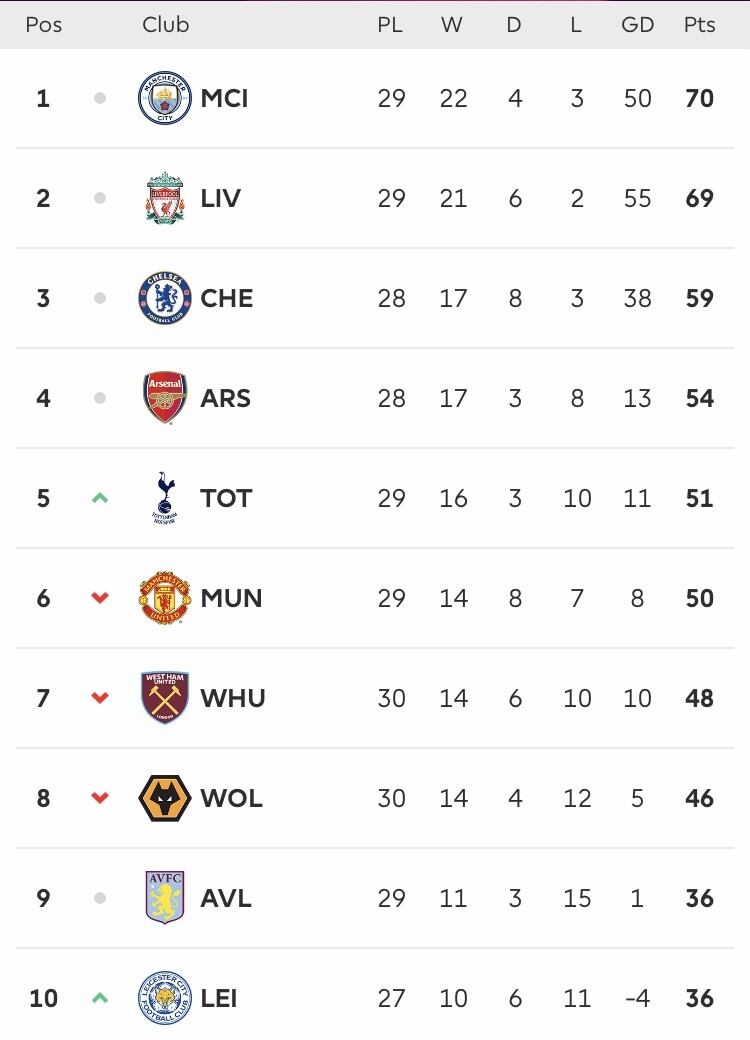 As for the bottom half, Leeds got a massive result to put seven points between themselves and the drop, having played a game more than Watford in 18th. 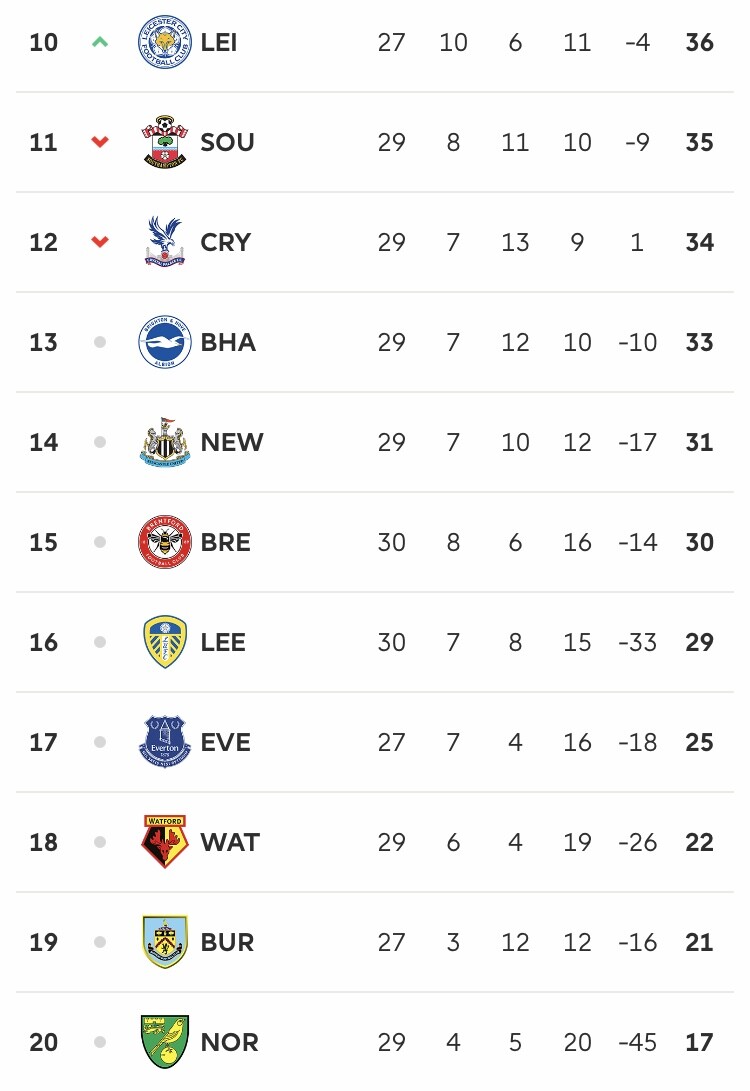 Have a great day, I hope you managed to see the games over the weekend, we have the international break over the next two weeks and return to league action for the final part of the season after that.