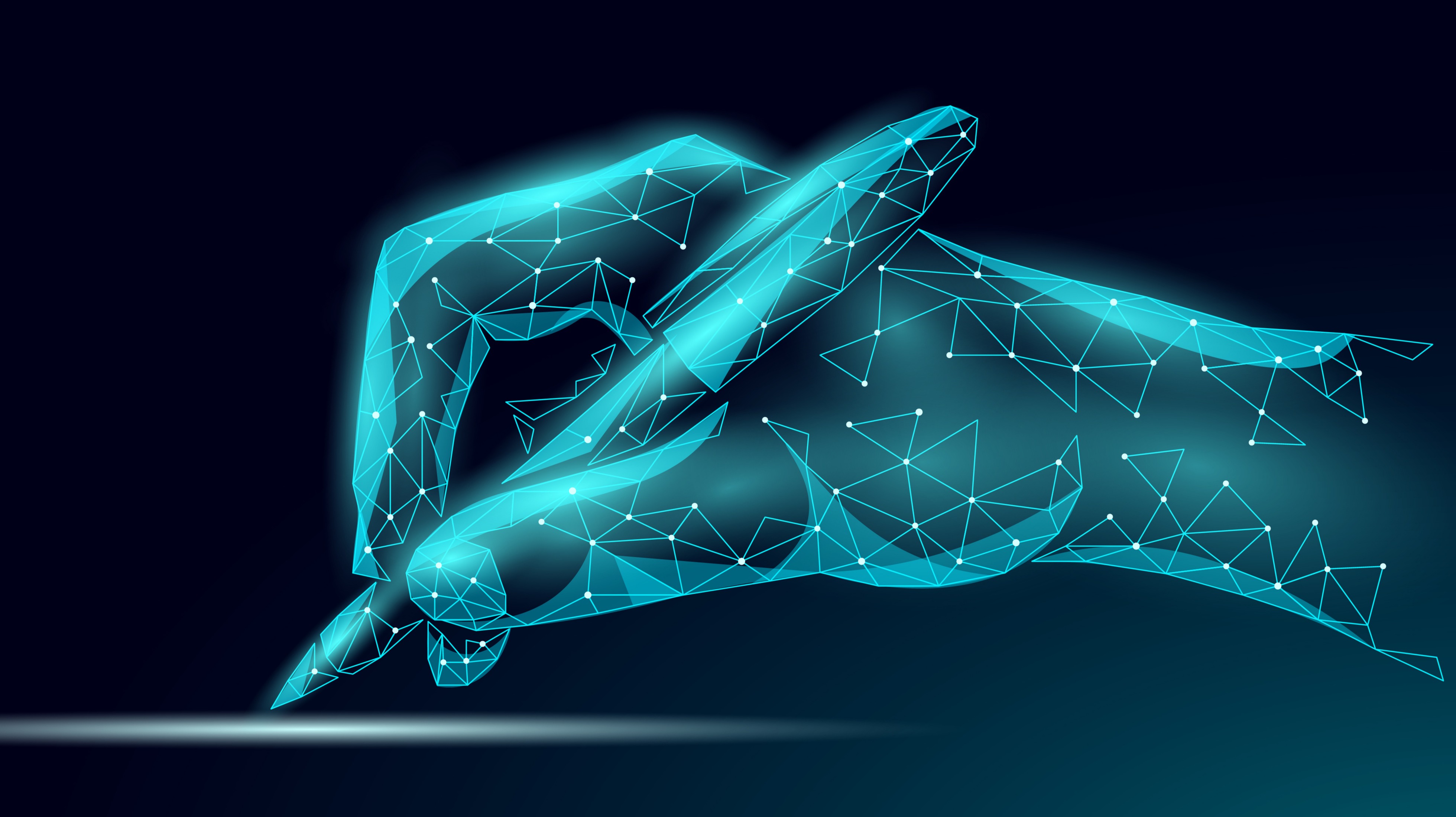 *If you want more Ethereum content as well as other top 30 coins, use the code "Publish0x" when subscribing to CryptoEQ.io to make your first month of CryptoEQ just $10!  * 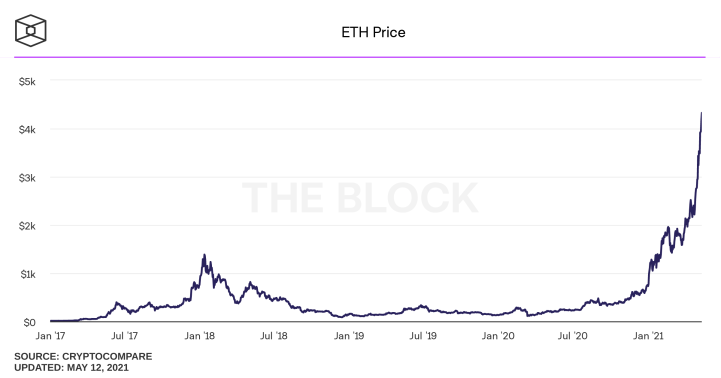 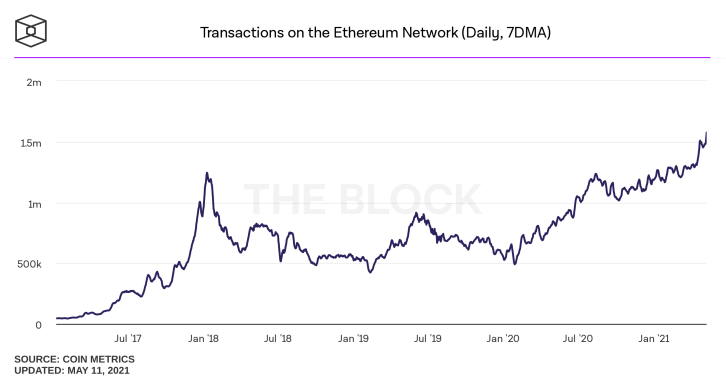 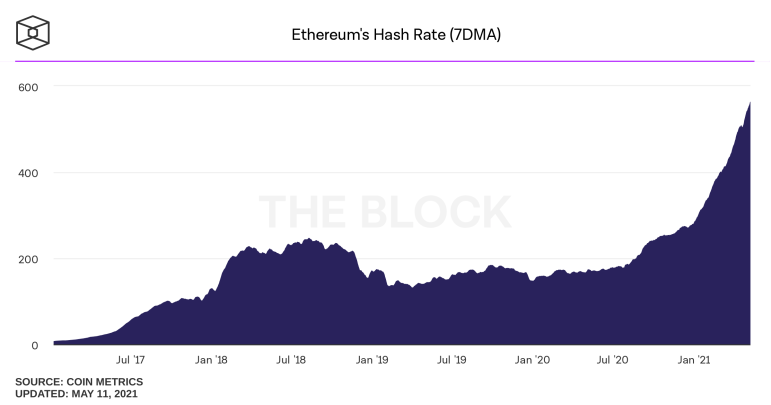 This also means FEES! In large part thanks to a craze around Doge-themed ERC-20 tokens. Uniswap volumes and fees have surpassed even Bitcoin! 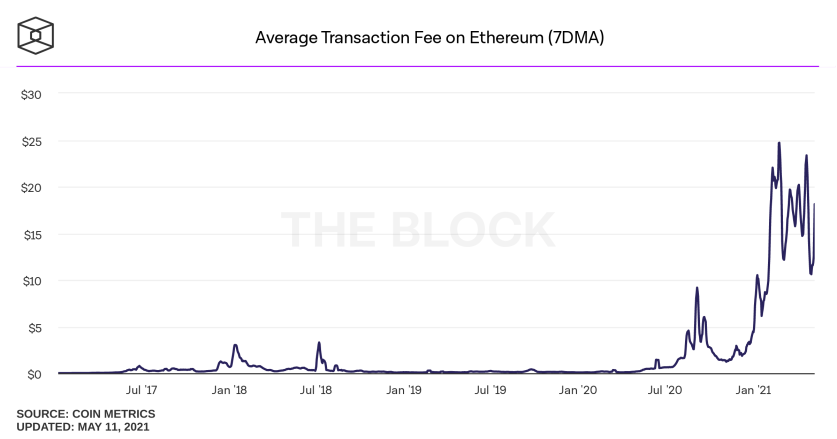 Ethereum’s main challenge to adoption stems directly from its well-known scalability problems. Unlike new generation blockchains focusing on high-throughput capacity that are built from scratch, Ethereum is grappling with how to scale the network without compromising decentralization or security. This is commonly known as the Scalability Trilemma, where sacrificing one of the three properties is necessary for the short-term for the other two to be viable. Ethereum has clearly taken the path of decentralization and security over scalability in the short-term.

Scaling woes have also continued to accelerate, as gas costs regularly become prohibitively high for many dApps, and dApp usage remains low compared to its centralized counterparts. Other platforms have the advantage of building their platforms without the stress of meeting network capacity demands. For instance, Cosmos is building their platform as a PoS-based interoperable framework for scalable blockchain initiatives, but it doesn’t have to worry about scaling with high user activity already active on the network, because it is not yet live.

The eventual transition of Ethereum to PoS via Casper and then to sharding, outlined in the roadmap, will provide a useful gauge as to the long-term viability of Ethereum as a dApp and smart contract network. For now, speculation runs rampant, but it is impossible to predict how PoS will play out at scale.

That said, because of Ethereum’s slow but measured total overhaul, some developers and users are looking to build and interact with dApps on other platforms, with some even migrating to them. EOS is the largest present competitor to Ethereum as a smart contracts platform, but it has severe decentralization and mutability concerns stemming from its Delegated Proof of Stake (DPoS) consensus. Despite the mounting issues, EOS dApps that require little need for decentralization, such as games and gambling apps, tout high user counts although there’s evidence to suggest these numbers are forged/manipulated.

Finally, Ethereum’s continually shifting narrative regarding scalability and upgrades may prove too much for many users and developers to tolerate. Scaling Ethereum has turned into a highly complicated issue that has progressed slower than anticipated, creating prohibitively expensive transaction fees at times.

Layer 2 or second layer scaling is a general term for solutions that help with increasing the capabilities of the main chain by handling transactions off-chain (off Layer 1). The two primary improvements layer 2 can provide are transaction speed and transaction throughput. On top of that, Layer 2 solutions can greatly reduce the gas fees.

Ethereum has several second layer solutions for scalability and privacy that are live, in development, or in the research phase. Developments on second layer scaling solutions on the main PoW Ethereum chain (not the ETH 2.0 version) are typically referred to as ETH 1.x. Mirroring Bitcoin’s Lightning Network is Ethereum’s Raiden Network for bidirectional, off-chain channel payments. Channels allow participants to exchange transactions off-chain thousands of times while only submitting two transactions to the base layer. However, the drawback is that channels are application-specific and cannot be used to scale general-purpose smart contracts. Raiden comes in several releases, with MicroRaiden and Raiden Network Red Eyes already live.

Eventually, Raiden’s aim is to achieve generalized state channels rather than just payment channels. However, such technology is exceptionally sophisticated and currently under intensive research and development.

Other layer two scaling solutions for Ethereum include Plasma and dappchains, which are childchains tethered to the Ethereum root chain. Plasma has received significant attention following the release of the corresponding paper by Justin Poon and Vitalik Buterin in August 2017. Nonetheless, the increasing complexities around practical challenges when it comes to implementing Plasma have become a significant concern.

Dappchains function similarly to Plasma as childchains of Ethereum and were proposed by the gaming platform, Loom Network. Loom offers a software development kit (SDK) – among other tools – to build scalable dApps on Ethereum – a major problem for developers at the moment. Dappchains have their own DPoS consensus for non-vital components of contracts, and retain the settlement, finality, and state transition of the larger Ethereum network.

Plasma enables the creation of an unlimited number of transaction-processing child chains (Ethereum mainchain clones) using smart contract and Merkle Tree technology. It is an attempt to create a more flexible state channel that enables many-to-many asset transfers with complex logic, as opposed to just simple one-to-one transfers. Like State Channels, Plasma is completely separated from the Ethereum L1.

One downside of Plasma is the long withdrawal period for users who want to remove their funds from Layer 2. Another is the ‘data-availability problem’. Since Plasma and the child chains are entirely disconnected from the main chain, it creates game-theoretic issues when the Plasma chain and the base layer chain try to sync up about the state of truth. The main chain can never with 100% certainty know the state of any Plasma chain, and thus cannot export its security to any child-plasma chain.

The OMG Network is built on their own implementation of Plasma, called MoreViable Plasma while Matic Network is a platform using an adapted version of the Plasma framework.

xDai is an EVM (Ethereum Virtual Machine) sidechain and functions independently from Ethereum. However, its native token XDAI (converted DAI from Ethereum) as well as its multi-use governance token (STAKE) sit atop the Ethereum blockchain. This means the xDAI network adheres to the same protocol updates, block size limits, and EVM specifications as the Ethereum mainnet. This compatibility makes it easy for developers, projects and users to move seamlessly between chains.

xDai is a sidechain with a stable reserve currency to help reduce congestion on the Ethereum chain and provide a stable unit of account. Through improved interoperability, xDai increases the available Ethereum operating space, reducing network congestion. Transactions conducted with XDAI, which is created when DAI on Ethereum is locked in the xDai bridge, can be made for fractions of the normal gas costs. The cost of a transaction on Ethereum can vary wildly ($1-$30+) based on congestion and the price of ETH whereas XDAI transactions cost less than $0.01.

However, xDai also uses a different consensus mechanism than Ethereum called POSDAO and has 5 second block times. Validators are incentivized with STAKE rather than the native XDAI token. This decoupling of the actual currency with STAKE helps transactions be processed at a lower costs.

Currently, nominated validators are signing blocks making the sidechain far less decentralized than its mainnet counterpart. In the future, operations will transition to a more permissionless delegated model where community members can participate as validators and delegators.

Rollups improve scalability by combining or “rolling up” sidechain transactions into a single transaction, generating a cryptographic proof (called a SNARK), and then submitting only the proof to the base layer. This removes the burden of data on layer 1 while also allowing layer 2 transaction data to be available on Layer 1 for validation. Moving transactions on a rollup layer 2 solution guarantees that one could verify the integrity of the data if it’s actually present. Scalability is improved on the base layer due to the lack of reliance on Layer 1 storage.

There are 2 types of rollups: Zk rollups and optimistic rollups.

Zk rollups are faster and more efficient than optimistic rollups but they suffer from friction and compatibility issues when migrating smart contracts to layer 2 . Loopring, Deversifi, and zkSync  are good examples of projects utilizing Zk rollups.

Rollups can 100x Ethereum’s scaling without ETH 2. With ETH 2 + Rollups (years away), scaling should theoretically reach 25k-100k transactions per second (TPS). There is increasing competition among various flavors in the rollup space with the trend being towards EVM compatibility and catering towards various needs of dApps.