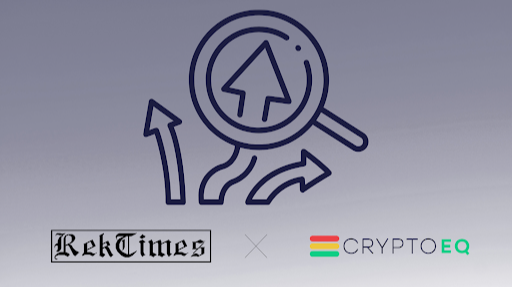 This article was written in collaboration with RektTimes

29 December 2021: It has been a common theme among cryptocurrency enthusiasts, analysts, and investors that 2021 has been a tremendously successful year for the industry. The crypto economy has grown substantially in 2021, with many projects - especially Bitcoin & Ethereum - seeing heightened interest from individuals, institutions, and even governments alike.

Over the past year, through the countless developments, changes, news headlines, and more, three leading trends have dominated 2021.

These three trends are:

Through the above trends, we have seen a large number of new players enter the cryptocurrency space. We have seen athletes launch NFT platforms, digital ticketing become an increasing trend, banks & other companies either investing in Bitcoin directly or through spot ETFs, and blockchain networks themselves look for the most efficient ways to become interconnected.

As many have touched on, DeFi has long been expected to be the overarching catalyst to fuel true mainstream adoption. While we have still not seen this level of adoption within the space, non-fungible tokens or NFTs have been the obvious adoption leader in 2021.

The explosion in interest in NFTs had a far-reaching scope over the past year. Not only have dozens upon dozens of NFT marketplaces and applications popped up or taken off in 2021, but institutions themselves have been quick to jump on the trend.

Some notable NFT markets are:

Nearly every major professional sports organization and league has, in some capacity, adopted NFTs. Whether it be in exclusive NFT collectibles, conducting digital ticketing, or simply announcing the desire to add NFTs in some capacity to day to day operations, it has been a huge reason the space as a whole has grown so much in 2021.

A bonus note for NFTs is the added value and importance that they may serve as investment into metaverse applications continues. With Facebook (now Meta) going all in on the development of the metaverse, it should be expected that traditional internet companies join Web3 protocols, DAOs, and developers in the construction of a true metaverse.

The significant increase in both interest and investment into NFTs has helped play a major role in sparking 2021's second major trend - institutional adoption. More individuals, institutions, and governments became either interested or directly invested in the cryptocurrency space in 2021 than any other year to date.

Some of the largest institutional and governmental adopters in 2021 include:

This is a great opportunity to revisit the technological adoption curve - a visual depiction of the steps that novel technologies undergo when attempting to capture widespread adoption.

This curve is shown below: 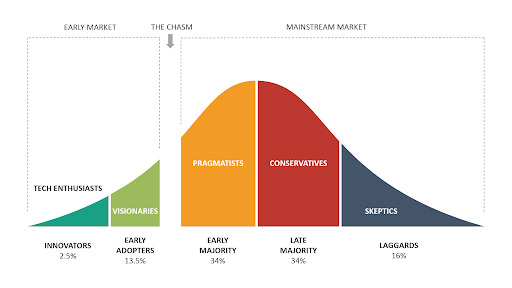 With major institutions now beginning to enter the picture and more investment money flowing into the space than ever before, crypto/blockchain/web3 is undoubtedly entering the 'Early Adopters' or 'Visionaries' phase of technological adoption.

The very first section of the above graphic - the 'Innovators' - includes all the developers, futurists, and early investors that includes essentially anyone included within the space prior to this year or even 2020. The argument can also be made for those in crypto during the last bull run of 2018.

As major businesses, institutions, and organizations enter the space, these are the early adopters that can fuel the first steps of real, mainstream adoption. The real question is - are we approaching the chasm or crossing it with institutions now in play?

The chasm in this instance is where technologies either successfully reach mainstream adoption or fail. While many would say that crypto is undoubtedly going to succeed, the chasm should not be underestimated. With countries like El Salvador seemingly all in on crypto, the next bear market will showcase whether the space is able to reach the mainstream market and 'Pragmatists' or 'Early Majority' of technological adoption.

The final major trend of 2021 is arguably the most important for real mainstream adoption. This is none other than interoperability. As blockchains have developed, many have sprouted independently of one another, competing for market share & attempting to attract the best coders, developers, and overall talent to construct applications, platforms, and protocols on top of their L1 blockchains.

What has become more obvious, especially over the past year, is that interoperability, not seperate competition, is the future of crypto & Web3. Interoperability refers to the ability of separate blockchain networks and applications to interact, communicate, and transaction between each other.

This is the vision behind projects like Cosmos (ATOM) - creating the "Internet of Blockchains". Thus, a common development theme has begun to emerge around this realized vision of a truly interconnected Web 3.0 space.

Some other notable projects developing interoperable or cross-chain mechanics include the following:

The creation of a Web3 internet of things (IoT) appears to be just around the corner within blockchain & cryptocurrency development. Even more ambitious is projects like The Open Network (TON) creating open source technology that could unite both an interconnected blockchain/ Web 3.0 space with the existing internet as it is known today.

The realization of how important interoperability is to the adoption of the cryptocurrency space fueled fantastic developments in 2021 and should be expected to continue substantially in the years to come.

We have seen countries embrace cryptocurrencies to counteract elements of the global pandemic. We have seen athletes and celebrities create their own unique NFTs to share with fans. We watched as billions of dollars flooded a copious amount of ambitious, young projects looking to change the face of all different industries, including:

The growth that can be expected in 2022 and especially beyond is monumental. As these technologies continue to disrupt new spaces, look for cryptocurrencies, blockchain, and Web3 to move further up the technological adoption curve as the mainstream market embraces these new changes.

In 2022, it is important to ensure you are receiving the best data, analytics, and professional insight possible within the crypto industry. For the most trusted and intuitive analysis on cryptocurrencies, become a premium member with CryptoEQ