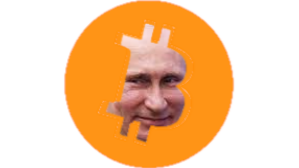 The Manipulator: He Who Shall Not Be Named

I can't say for certain about manipulation, I know as much or as little as the next guy, but there seems to be something to it. When you see the next whale do a crap-ton-jillion short after the last, hey, they say follow the smart money (*not all whales are smart btw). Every time we buy or sell crypto though we're technically manipulating the market too, that's just the nature of markets. But of course we the aggregate supposed 20% of retail money in crypto don't have THAT much an effect, especially as individuals. As chaotic as the US government and institutions can be sometimes and perhaps and don't seem to communicate well enough often enough - or maybe they are! - I'm sure places like Russia might be a little more chaotic and/or give the world's citizens enough reason to doubt their stated motives and give more pause about plausible believability. I'm not sure what's more plausible, that Russian officials had conflicting statements on accident, on purpose, or face value Putin was responding to his fed bank. Doesn't really matter because whatever effects it might have on markets is the same.

Not to go on about our favorite contemporary James Bond super villain too much, I don't like giving bandwidth to it, but I just want to point it out and emphasize it. It's hard to follow news like that stuff in real-time. Most of the time we're seeing price actions and  finding out why after the fact, but it's useful to see why prices go up, because they're also likely to come back down again at predictable intervals. We have a 5-6 week overall breather before Jerome comes back for his printed money. Macro chart is a big descending channel since Nov, and that's gonna take at least a month or two of reversing and multiple upside confirmations before we can even say mid-term bullish again, so don't be fooled if you're trading, an if you're buying, can maybe wait for smaller and larger dust clouds to settle to what will probably be lower. There's plenty of more fud cycles for the year, but this will ultimately strengthen and temper crypto in the long run.

Other fun instances of news though, Arizona, Texas, and Florida appear to be coming out swinging for crypto, albeit for blatant if perhaps also a bit disingenuous political reasons. But if they're advancing crypto's cause, I support that cause. States promoting legal tender is amazing, and I hope it happens. Let's gradually raise that adoption curve, and though there's plenty of opportunity for places to shine, I wouldn't mind having multiple "crypto valleys" here in the US spring up and mature and add to the nation of crypto. By 2030 we could be around 1/4 of the global economy and 1/5th the population, with everything tech and financial touching the space. That's a hopeful and revolutionary future right around the corner. I hope you're ready, but this decade is going to be a long road. Especially with Vladimort going after Ukrainian Hogwarts.

My humble views on the matter, after following as closely as I could since 2013, I think peace needs to be on the table, and I'm pointing out that it's not. More than anything I think that is up to Ukraine, but Putin of course hasn't been helping at all (or maybe he has in a Russian sort of way, and I somewhat can't blame him). Ukraine's been choosing to fight their civil war, but I understand it's contentious. You can either have peace through a serious commitment to it with partition, or you can try to find it at the end of escalating and endless conflict. They thought they'd be able to contain the secessionists after all but alienating them and waging war on them. But when it comes to these matters, logical decisions are understandably not made, and the ideals of better futures fade with them, they all have their reasons. I hope it works out for everyones sake, lot of lives at stake. With that said, I don't think Russia or Nato are dumb enough to escalate this further, but we'll see how stupid everyone is eventually.

So keep that fud in the back of your mind. If anything happens we'll probably see the best prices of everything of the century, except for maybe fuel and stuff like that. Let's have a vodka toast for the man we love to hate and see what he has in store for his finale.