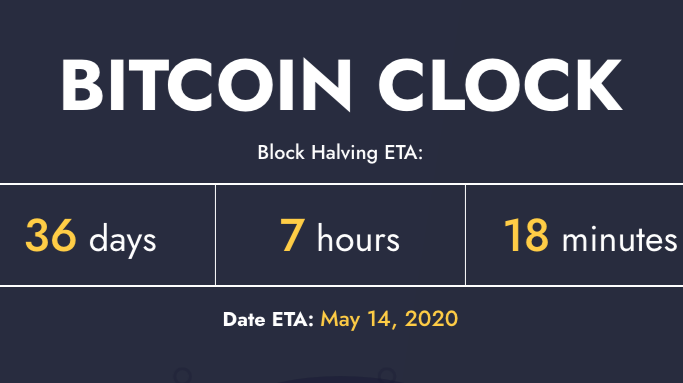 Bitcoin Reward Halving Soon! (And what it means)

As some of you may know or have heard about, the Bitcoin reward is halving soon. What does this mean? You only have half the amount of Bitcoin??? You will only be rewarded half the amount through giveaways? Bitcoin will be split in half? No none of those are correct. Don't worry- this is excellent news for Bitcoin.

The halving simply means that the amount of Bitcoin produced through each block will be cut in half, which occurs every 4 years. It just so happens that the 4 years is next May, specifically right around May 14th, so mark your calendars!

Satoshi was brilliant in that he understood that scarcity creates value along with demand. So he coded that every 4 years, the amount miners can mine will be cut in half, up until the very last Bitcoin will be mined, apparently in the year 2140. That's a long ways off but you have to remember that the closer the world gets to that date, specifically every 4 years, Bitcoin becomes that much more rare.

The current reward for mining a block of Bitcoin is 12.5 BTC, & it will drop to 6.25 BTC when this occurs next month. Will this be a bullish or bearish event? My thoughts are simple. Bullish. Long term that is. Will some miners grow frustrated that they are no longer receiving the same amount they were on May 13th? Possibly. Would they shut off their mining rigs? Who knows, possibly? But the thing is this is good for Bitcoin. Less mined means less being available to sell, which kind of, in a sense, dictates the current price. If nobody ever sold any, the price would skyrocket. Conversely if nobody ever took an interest in buying or trading, the price would plummet. But the demand is growing every day behind the scenes. Investors are flocking to it in times of economic uncertainty.

A good analogy is think of a mine producing gold. Every day they are able to produce, let's just say, 100 pounds of gold. (Have no idea whether that is realistic or not but I don't pay attention to gold mining lol). They have consistent demand from investors purchasing gold for a plethora of reasons. But all of a sudden one day, they are finding they are only able to mine 50 pounds of gold, yet the demand stays the same. Shouldn't the supply & demand be factored in, thus driving the price up rapidly? One would think so.

This brings us back to Bitcoin. If the demand remains the same, maybe even grows because people are starting to become aware of this event and the impact it typically has, then the price should massively appreciate. Overnight? Doubtfully. But let's take a look at a chart of previous Bitcoin reward halvings & their implications afterwards- 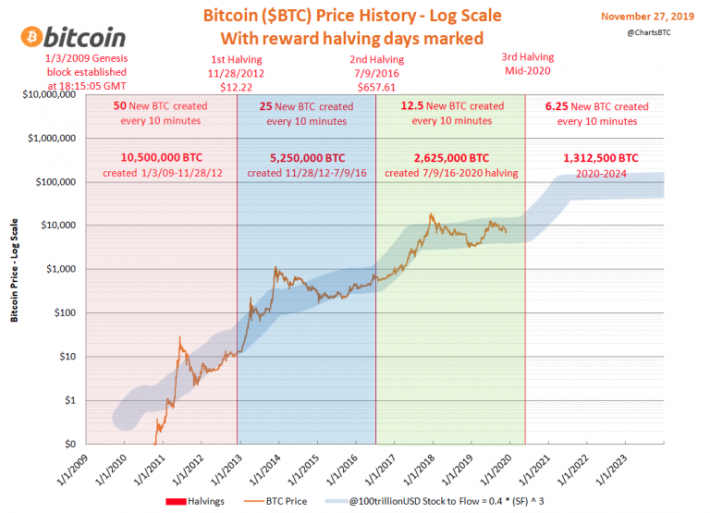 As you can see, Bitcoin typically hits the 4 year cycle peak somewhere like a year or two after the reward halving. This previous cycle, as many of you may or may not remember, we topped in December 2017 somewhere around $20,000. A massive increase from around $650, which was the price at the time of date of the last halving. If history repeats itself? Well let's do the math. $20000 / $650 = roughly a x30.

Anyway to sum things up or as reddit puts it TL;DR (too long, didn't read) Bitcoin is slated for a reward halving on May 14th approximately. The block reward goes from 12.5 btc to 6.25 btc. With less miners being able to sell, & assuming the demand stays the same or increases, we could see a price appreciation. In previous 4 years cycles (it halves every 4 years) the peak of the 4 year price happened roughly 1-2 years after the reward halved, so maybe it would be a good time to fill your long term bags with hopes of them appreciating by the end of next year (Dec 2021), maybe much sooner.

Will history repeat itself? Will Bitcoin rise in demand due to the current fragile state of the economy coupled with less being mined? Will it become truly a "digital gold" as people flock to it for any number of reasons? Nobody really knows but us Bitcoiners like to think that all these things will happen 😎

Until next time, Owen signing off. Peace out & enjoy your week ☮️